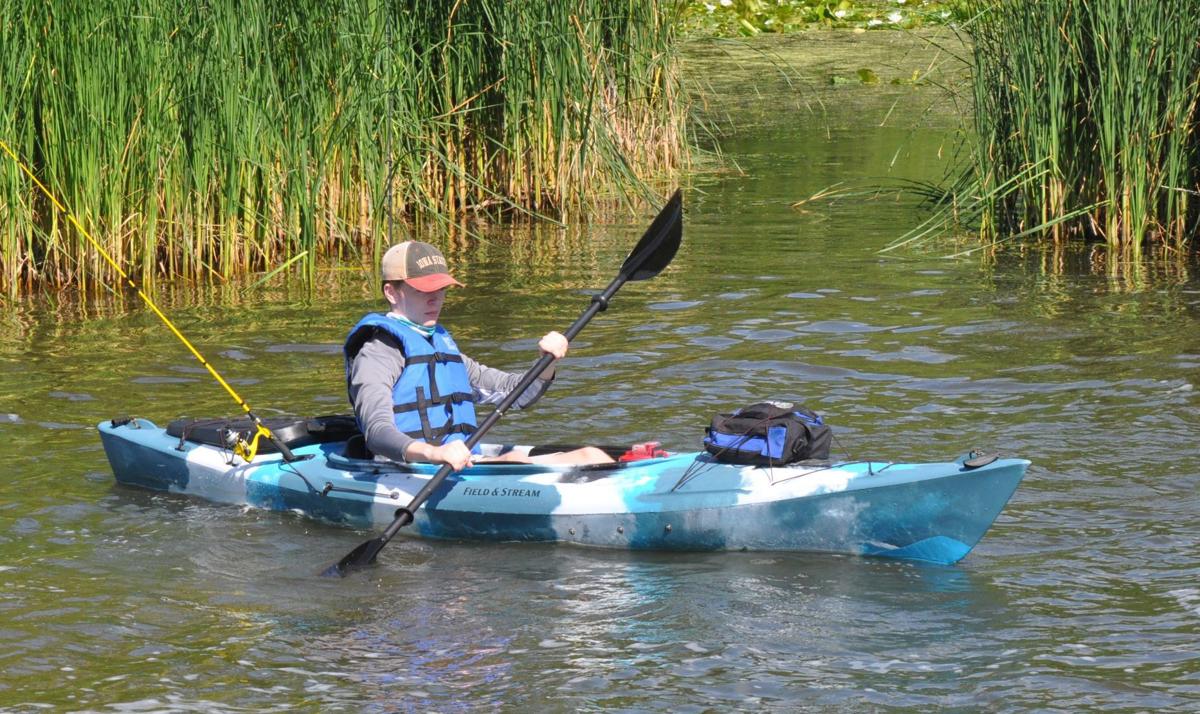 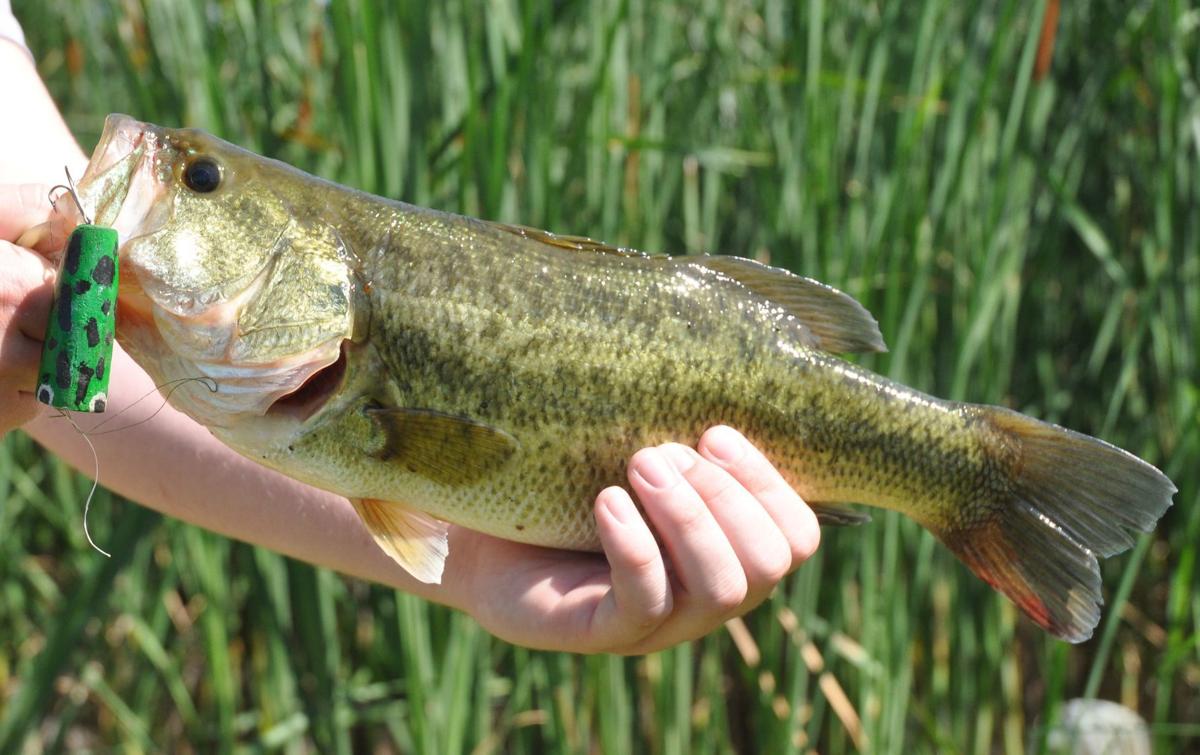 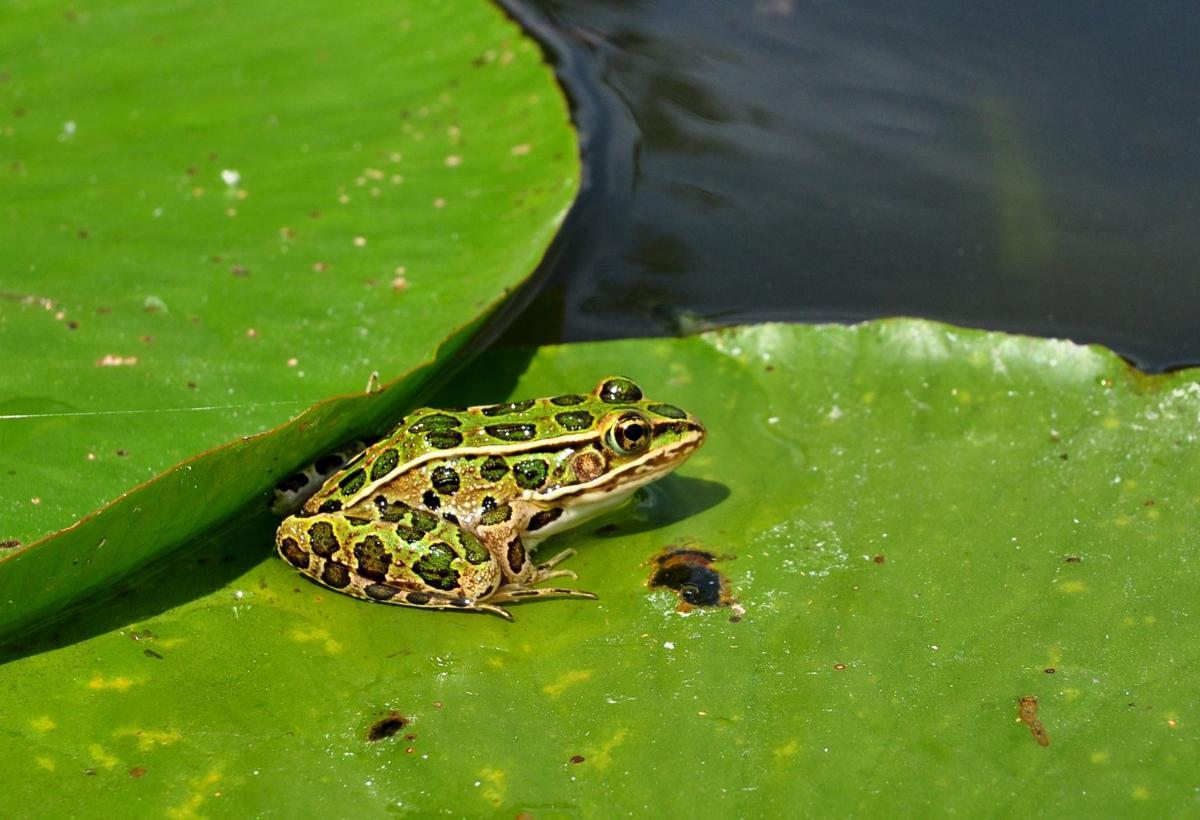 A leopard frog sits atop a lily pad at Clear Lake’s South Bay. As improved water clarity has promoted the regeneration of submergent aquatic vegetation, largemouth bass populations are staging a recovery. Underwater plant life provides food and critical nursery cover for bass and other sportfish.

My earliest fishing adventures began during the 1950s on the shores of Clear Lake. As an impressionable youngster, it didn’t take long to realize the importance of the largemouth bass to Clear Lake’s summer fishing scene.

Powerful and aggressive, “black bass” were among the lake’s most popular gamefish. My Dad was an avid bass fisherman. He netted many beautiful fish, including some genuine, eye-popping lunkers. Most of those fish were taken while probing the north shore’s vast network of lily pads and round stem bulrush.

Pursued by a wader-clad cadre of devotees, Clear Lake’s bass population enjoyed a cult-like following. Armed with Pflueger bait casters, bamboo rods, and braided line, anglers prowled the shallows with same caution used by hunters when approaching heavily pressured wild game. Although tackle arsenals might contain a variety of baits, there were only two lures that dominated -- the familiar treble-hooked red & white wooden plug, and the weedless Johnson Silver Minnow tipped with a chunk of frog-colored pork rind.

Dad’s best largemouth was taken in the rushes at McIntosh Woods State Park on the Johnson Silver Minnow and pork frog. Although the fish was never put on a scale before being released; the sway-backed, sag-bellied monster would have been a guaranteed head turner at any southern bass tournament.

Bass populations remained extremely populous into the 1960s. Due to a rich variety of year classes, bass fishermen were always prepared for a surprise. The next fish could literally be anything from a four-incher to a four-pounder. Largemouth were so thick, in fact, that some people caught bass when they weren’t even fishing. During the summer months, my mom was a cook at the Baptist Camp, located on Clear Lake’s north shore. During one of the youth camps, a couple of boys decided to try their hand at canoeing along the Camp’s lake front. While moving through some bulrush, the teens were amazed when a nice bass leaped out of the water and landed in the bottom of their canoe. Quickly paddling to shore, the excited boys raced to the kitchen and asked mom if she’d cook the fish for them. She agreed and the bass became a bonus addition to the day’s scheduled menu.

But the high times didn’t last. As human pressure on the lake and its watersheds continued to escalate, bass populations declined and then crashed. Deteriorating water quality, poor spawning success, and lack of nursery cover all contributed to the demise. By the early to mid-1970s, the largemouth bass had all but disappeared; landing a mature fish had become a rarity. If Clear Lake had had an endangered species list, the largemouth bass would have been a top contender.

The good news is that, as a direct result of the Clear Lake Enhancement and Restoration Project, bass populations are on the rise. Clear Lake watersheds are receiving unprecedented protection, water clarity is showing dramatic improvement, stands of critical aquatic vegetation are being re-established. Following a long period of severe illness, Clear Lake is returning to health.

With improved spawning habitat and the return of vital nursery cover, largemouth numbers are surging. And although population densities are nowhere near their former abundance, they are certainly headed in the right direction.

Equally encouraging is the fact that a new generation of bass fishing enthusiasts is beginning to emerge. A new generation calls for new tactics. Bamboo fishing poles have been replaced by ultra-sensitive graphite rods. Antique plugs have given way to rubber worms and life-like replicas of frogs and bait fish. Although wading through aquatic habitats has retained its merit, New Age anglers are also learning to probe vegetated habitats from lightweight kayaks. Armed with positive attitudes and lightweight spinning gear, they’re having the time of their lives.

Who knows? If the trend continues, maybe populations will one day rebound to the point where someone will be amazed to see a nice bass leap out of the water and into their canoe - even when they’re not fishing.

I tied into a nice muskie this morning. Or perhaps I should say the fish tied into me. The incident occurred shortly after sunrise along Clear…

Washburn: Yellow bass numbers decline at Clear Lake, but don't give up yet

Tying on a 1/16th-ounce jig head, I made a short cast toward the waist deep, submerged vegetation. As soon as the jig hit bottom, I began twit…

White-tailed deer are fascinating creatures. Watching them is one of my favorite pastimes; not just during the fall and winter archery seasons…

Intelligent, adaptable and unbelievably resilient; the white-tailed deer is one amazing creature. The white-tail’s resilience – its ability to…

A leopard frog sits atop a lily pad at Clear Lake’s South Bay. As improved water clarity has promoted the regeneration of submergent aquatic vegetation, largemouth bass populations are staging a recovery. Underwater plant life provides food and critical nursery cover for bass and other sportfish.