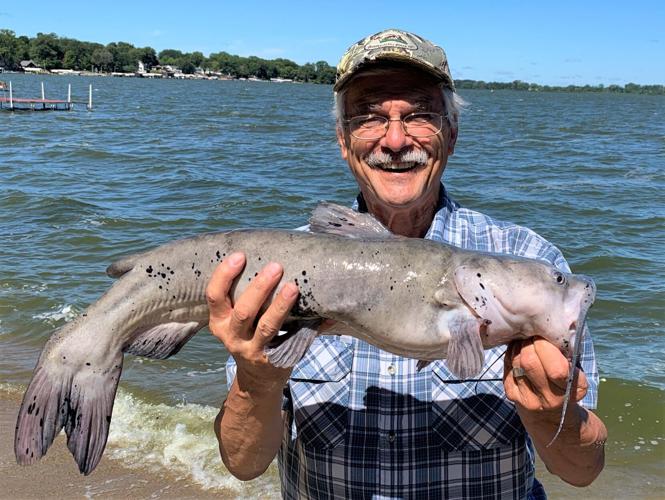 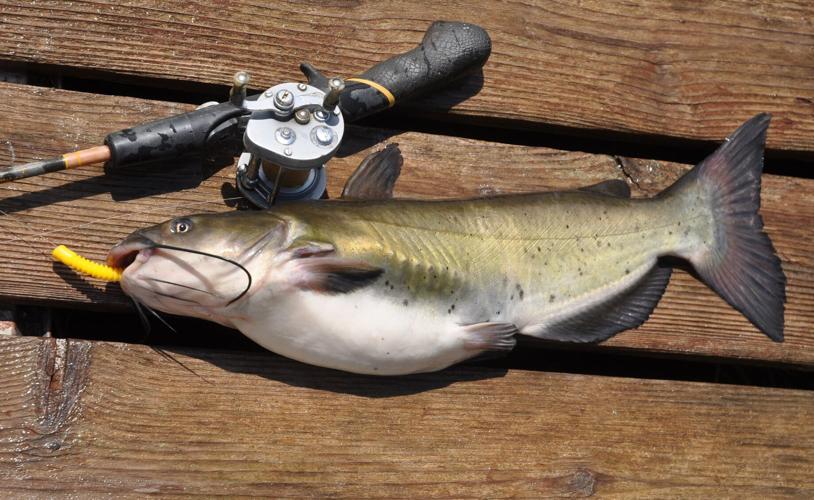 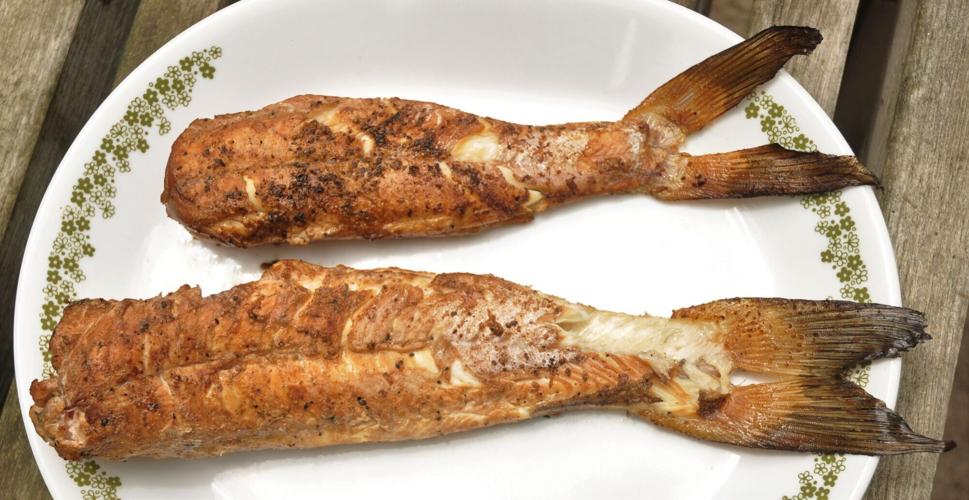 Quick and simple, Cajun grilled catfish is one of my favorite recipes. Once the lid goes on the cooker, fine Southern-style dining is just eight minutes away.

Fishing in Clear Lake is a lot like Forrest Gump’s box of chocolates. You just never know what you’re going to get.

The lake is full of surprises. My most recent surprise occurred late last week while plying the shallows in search of loafing walleyes. This year’s crop of young fish has grown to the point that they are currently providing abundant forage; a development that is causing toothy predators to relocate into as little as 2 ½ to four feet of water.

During late summer, an ultralight fishing rod equipped with high test, but low diameter braided line tipped with a 1/16-ounce Twister head is my favorite tool for pursuing aggressive shallow water walleyes. Usually lying in or near heavy cover, most fish are averaging anywhere from around 14-inches to 16-inches, but I’ve also caught a couple of “slot walleyes” running up to 21-inches in length which are always a thrill on ultralight gear.

Moving as quietly as possible, I usually make my first casts in about two feet or so of water and then work my way out. If the fish are in, the action is often soon in coming. Sometimes, unbelievably soon. That’s what happened last Thursday when I received a solid hit on just my second cast.

The fish felt weighty, and I put a little extra muscle into setting the hook. The fish responded by nearly ripping the ultralight out of my hands. The water flew and the short fishing rod bent double as the finny creature attempted a rapid departure. Now I’m no fishing genius but something told me that whatever I had hooked into was considerably larger than a 14-walleye.

The ensuing contest became nip and tuck, but I somehow managed to hang onto the fish. On its fourth run, I finally caught a glimpse of what had attached itself to the end of my line – an XL sized channel catfish.

I don’t know how long the battle continued, but I know that several minutes must have passed before the fish began to show signs of tiring. It took minutes more to bring the struggling ‘cat to within feet – and finally to within arm’s length -- of my position.

But the fight hadn’t been called yet. Every time I’d reach for the fish, it would respond with another water throwing, line ripping run. Four times I got my hand on the fish only to have it tear from my grip and make another water boiling run that seemed as powerful as when we first met.

With each close encounter, the fish bent my Fenwick rod into such a complete horseshoe, that I feared for its future. There was reason for concern. In August of 2019, I had a big channel ‘cat literally snap my fishing rod in half.

Finally, on my fifth attempt, I was able to get my hand into the fish’s mouth. Holding on to its jaw for dear life, I immediately headed for the shoreline. Measuring 30-inches in length, the catfish was indeed a whopper. Although too large for the skillet, the fish was an ideal candidate for the smoker. My son Matt has some excellent recipes and I let him do the honors. As always, the combination of hardwood smoke and brown sugar gave the finished product a robust flavor that was out of this world.

While the steamy Dog Days of late summer may slow the roll for many fish species, the action for Clear Lake’s channel catfish is just heating up. Catfish simply love the spa atmosphere. The more tepid the waters, the more active and voracious Mr. Whiskers becomes.

Always on the lookout for an easy meal, channel catfish are efficient scavengers, locating much of their food by means of ultra-sensitive, odor detecting “whiskers." Taking advantage of this well-known trait, anglers employ a variety of “stink baits.” most of which more than live up to their names. Nasty beyond description, the aroma of a good stink bait does not improve with age – although hungry catfish may beg to differ.

Although the catfish’s scavenging reputation is well deserved, the species is also a predator in every sense of the word. While trolling for walleyes it is not uncommon to have a channel cat strike a fast-moving spinner or crank bait. And anyone who has ever hooked into a catfish doesn’t need to be reminded of the fish’s power. Catfish of all sizes fight like monsters.

Hook into a five or six pounder and you definitely have your hands full. Most giants are never landed, leaving anglers with broken lines and broken hearts.

Those catfish that are brought to bay make excellent table fare. Generally speaking, the smaller the fish, the milder the flavor. Fish measuring anywhere from 14-inches to 20-inches make the best fryers. An age-old staple of the Deep South, channel catfish are traditionally prepared whole.

Quick and simple, one of my favorite methods is to liberally season skinned fish with Cajun spices and place directly over coals in a covered grill. Larger specimens are best suited to spending time in a hardwood smoker.

A traditional favorite of the Mississippi River backwaters, few flavors can match that of a slowly smoked, sugar cured channel catfish.

Mix the sugar water and fill the backyard feeders. The fall migration of ruby-throated hummingbirds is underway. For those wishing to obtain e…

Iowa’s small game hunting seasons are just around the corner.

Iowa’s special teal seasons are the best single change in waterfowl regulations in the past 50 years.

“There was nothing to see but prairie, green stretches of grassland rolling quietly outward ‘till lost in the haze that trembled on the horizon.”

Following decades of silence, Iowa’s most secretive reptiles are currently emitting radio signals from the watery depths of Eagle Lake.

I was staking out – and hoping to photograph – an active nest of red-bellied woodpeckers.

With this year’s mulberry crop reaching full maturity, it’s time to grab your bucket and head for the woods.

Washburn: Stay away from 'orphaned' birds and bunnies

As predictable as lengthening days and summer heat, phone calls regarding “orphaned” wildlife are streaming in.

Washburn: Chuck is a better neighbor than you'd think

I must admit that I was a bit apprehensive when I learned that Chuck had moved into the neighborhood.

The spring songbird migration is winging northward. And while the larger and more colorful species – such as tanagers, orioles, and grosbeaks …

Washburn: Spring turkey harvest down from 2020

Washburn: Don't count your turkey until it's in the oven

PennyWise Episode 88: 5 tips to consider if you're giving gift cards this holiday season

PennyWise Episode 88: 5 tips to consider if you're giving gift cards this holiday season

How to talk to kids about school shootings

How to talk to kids about school shootings

Quick and simple, Cajun grilled catfish is one of my favorite recipes. Once the lid goes on the cooker, fine Southern-style dining is just eight minutes away.