DES MOINES — Gov. Kim Reynolds said Tuesday she is pushing for a compromise to Trump administration officials intended to maintain renewable fuel production while averting a potential “crisis” by keeping ethanol plants in Iowa and small oil refineries in other states from shutting down.

Reynolds said she believes a balance can be achieved that meets the federally mandated 15 billion gallons of ethanol under the 2007 Renewable Fuel Standard that allows the U.S. Environmental Protection Agency to grant waivers to distressed oil refineries but at the same time reallocate the blending requirements to other, larger refineries so ethanol and biofuel production is not undercut.

“We can’t continue to lower the 15 billion gallon floor and expect the industry to survive and continue to grow,” Reynolds said during her weekly news conference.

“I believe there’s a way we can move forward to address both situations while really identifying the potential crisis that we’re facing,” added the governor. She expressed concern the issue was adding more financial stress to what already “has been a rough, rough year” for rural America.

President Donald Trump drew bipartisan ire from Midwest states when it was revealed earlier this month that he had intervened on behalf of the oil industry over corn growers when his administration granted 31 waivers to small refineries — exempting them from complying with the nation’s biofuel law.

Iowa’s Republican governor said she has spoken with the president and top administration officials. She insisted Trump remains “an advocate for farmers” and is “trying to do the right thing” for both the ethanol and oil industries in granting the waivers.

But she also noted “I’m just not sure that he fully understood maybe the ramifications of what that means. I would say that he has a pretty good idea now of what those ramifications entail.”

Corn farmers, ethanol producers and Iowa leaders were ecstatic when the administration announced last spring it would undo an Obama-era policy and allow a richer blend of ethanol to be sold year-round throughout the country, Reynolds said. But she added the year-round E15 sales have been undercut and undermined by the 31 refinery waivers.

“To turn around and issue 31 waivers that completely undercut, not only the Renewable Fuel Standard, but it also undercuts the impact we would be able to gain with E15 year-round,” she said. “So we’re trying to give them some options, what needs to be reallocated to really address the short-term crisis that we’re seeing with ethanol plants shutting down or cutting production.”

“That’s going to have a significant impact,” Reynolds said.

Granting waivers to the federal mandated Renewable Fuel Standard — a more than a decade-old federal law that requires refineries to blend corn-based ethanol into their gasoline or buy credits from those that do — has “destroyed” demand for ethanol by more than 4 billion gallon, Reynolds said. Farmers and ethanol industry officials want at least more than 1.1 billion gallons reinstated and reallocated as well as another 500 million gallons covered by a 2016 court case to be honored, she added.

“We feel adamant about the EPA really upholding the promises that President Trump made to farmers when he was campaigning that he believed in a strong Renewable Fuel Standard and that he supported our farmers and he does,” Reynolds told reporters.

Since Trump took office, the EPA has more than quadrupled the number of waivers from complying with the law it has granted to refineries, including some operated by giants Exxon Mobil and Chevron Corp. The waivers save the oil industry hundreds of millions of dollars, but enrage farmers who assert the exemptions threaten demand for one of their staple products.

Refiners dismiss the argument, saying ethanol demand hasn’t been affected by the waivers.

Reynolds said she has talked with other governors and has offered to meet directly with the president to “let him know firsthand what is happening on the ground and the impact that that will have going forward.”

The governor, who has an honorary position on the president’s 2020 re-election campaign, said she agrees “with a lot of things that he’s done.” But she noted “there are going to be areas where we might not agree, and I need to be able to say in a very respectful and professional manner this does not help what we’re trying to do in Iowa.”

Gov. Kim Reynolds said Tuesday she still is waiting for an agreement in writing from the Trump administration on a compromise resolution to th… 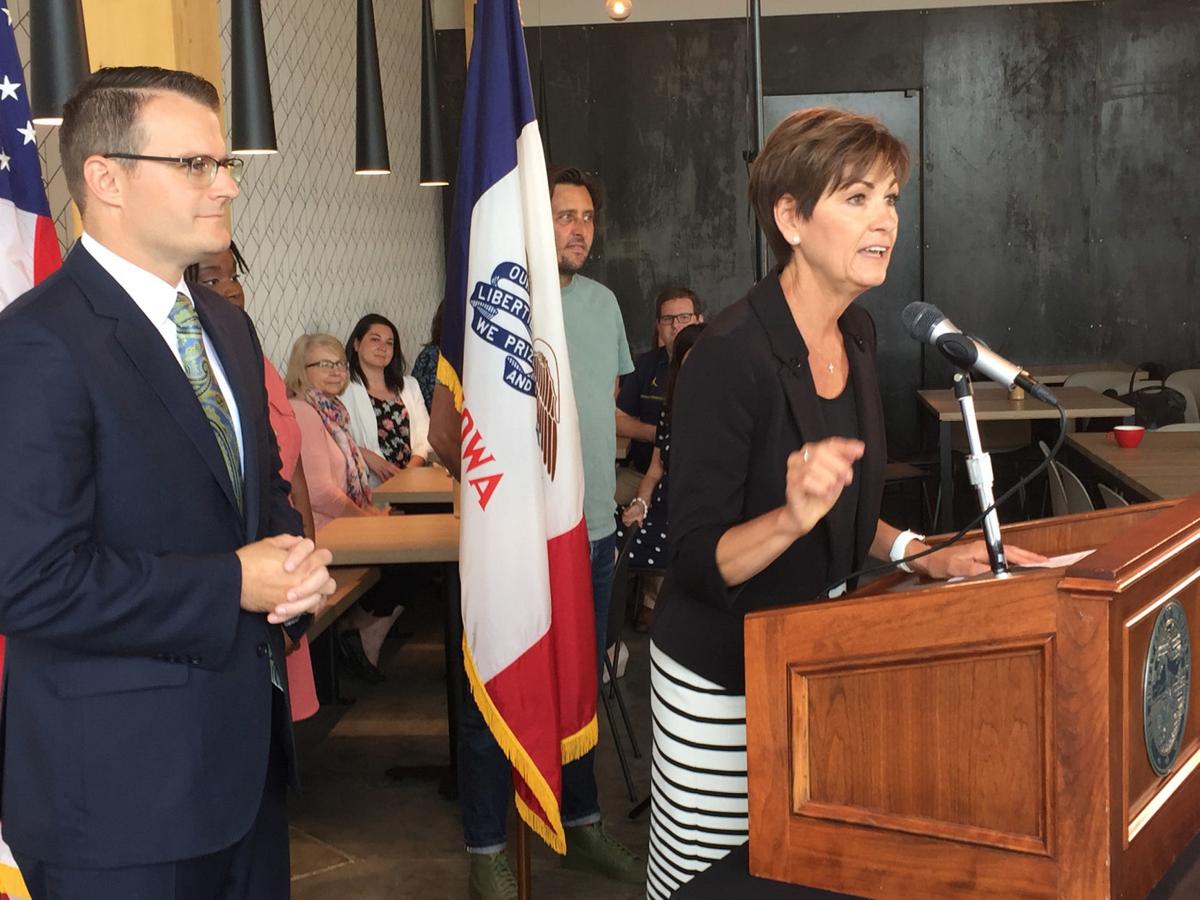 Gov. Kim Reynolds (right) said Tuesday that she is pushing for a compromise to Trump administration officials intended to maintain renewable fuel production while averting a potential “crisis” by keeping ethanol plants in Iowa and small oil refineries in other states from shutting down.