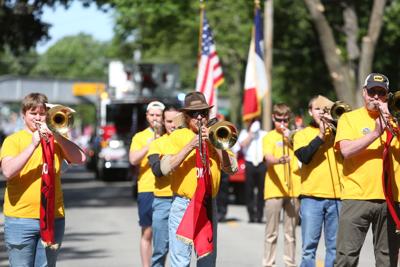 After taking a year off because of the COVID-19 pandemic, the North Iowa Band Festival is back for its 82nd iteration this Memorial Day weekend.

In its return year, the festival has more to offer than just musical celebrations of composer and Mason City native Meredith Willson. There's a carnival, a memorial run, a marketplace, tributes to essential workers and more fried food than any one person could hope to consume.

It could be an overwhelming amount if not for the digestible blog the Globe Gazette is providing throughout the festival. We're going day-by-day and night-by-night so make sure to continuously check back in with the website.

Thursday, Day 1: A day for the indoors

By 6 p.m., the carnival is assembled for the weekend but there's no hustle and bustle. It's still cold and damp outside. The lemonade vendors aren't out hawking their 100 ounce drinks and the Ferris wheel isn't spinning mesmerizing circles against the cloudy downtown skyline. This is clearly a day for indoors. So it's inside of Southbridge Mall where signs of life can be found.

Entering from the northeast set of doors, the folks at Pad Thai Express are winding down for the day. The Pretzelmaker people are seasoning bites with cinnamon sugar as kids go jogging past. Rounding the corner to the Younkers concourse, there are more than 40 concertgoers gathered with less than 10 minutes before showtime. The Mason City Municipal Band members are getting their final moments of practice in and taken at all once it can sound like a cacophony.

When Mason City Chamber of Commerce President Robin Anderson introduces the evening, she makes sure to mention that this is the first time the band has played in two years and that such events would not be possible this year with all of the work that essential workers have done. Following a Band Fest history lesson from KGLO's Bob Fisher and a performance of "The Star-Spangled Banner," the band gets rolling with its very own theme.

At times they dial down while playing a somber tune such as "Theme from 'Summer of '42" only to come surging back when guest conductor Chris Bell takes over for Russ Kramer to lead the drum-heavy "Lola Flores." Of course, the concert truly crescendos when the band dips into pieces by Willson. First they play "Here's Love" before tackling multiple cuts from "The Music Man."

After those are over, the crowd of 70 people can't help but applaud. If downtown was quiet outside on the first night, it was anything but inside Southbridge.

With the weather in a more forgiving mood Friday, the evening's outdoor entertainment was led by the Mason City High School Orchestra with a near-hourlong performance on Federal Plaza at 5 p.m. The orchestra showcased classical and modern pieces, playing everyone from Schubert to The Beatles.

At 6 p.m., attention shifted to the main stage on North Federal Avenue for a concert by the Mason City High School Jazz Band. While people plopped their lawn chairs down along Central Park's east edge, the outdoor market on the opposite side of the park began picking up activity.

The carnival and midway saw a modest crowd, with amusements for most ages, including a bounce house, Ferris wheel, Zipper and a carousel.

Saturday, Day 3: All the traffic's here

It's the kind of Saturday that's darn near perfect for a parade: the skies are blue, the clouds are sparse and birds are lightly trilling.

Just walking down East State Street, between North Connecticut Avenue and South Carolina Avenue, there are several dozen people posted up. Some with their kids who are snacking on baked crackers similar to Goldfish or reading books. Other folks with their friends carrying gear for a game of cornhole later. Turning circles in one of the year is a lawnmower man which is proof that yard maintenance doesn't stop for anything, not even a parade.

The smell of fresh cut grass is overtaken though by various grilled delicacies wafting in from people's driveways.

By East Park, the gaps between lawn chairs lining the street are getting to be non-existent. At South Tennessee Avenue, two people have opted for office chairs instead of lawn chairs. Two older gentleman discuss traffic which ends when one says "All the traffic's here." Near the end, close to Illinois Avenue, the crowd begins to tape off again. There's less hubbub and more spaces to hunker down.

Tim Stumo and seven-year-old Calan, said they mainly came to see the bands though Calan hadn't been to Band Fest previously so he said he was plenty happy to watch it all unfold. Meanwhile, Sam and Charles Bayim, from Rockford, said that they were most excited to see the Shriners in their souped-up minicars and veterans from military. Speaking on the Shriners, Sam said "How they do it, I have no idea." Soon enough, they got their wishes of go-karts and military floats. But not only that.

Starting and 10 a.m. sharp and lasting for about 90 minutes, this year's iteration of the parade featured 78 entries including 10 high school marching bands, three festival award winners, a smattering of horses and one clearly haunted float from "The Nightmare" in Clear Lake. One of the most raucous bands was Lake Mills High School who has won the "Meredith Willson Grand Champion" award six years in a row and performed a song and dance several times along the route. They were actually the last band to perform.

The first up was the Mason City High School Band, led by Russ Kramer, who went by just before Mason City Mayor Bill Schickel. The four-time municipal leader was one of several elected officials in the parade along with State Sen. Amanda Ragan (D-Mason City), State Rep. Sharon Steckman (D-Mason City) and Fourth Ward Councilmember John Jaszewski. Though the gaps between each parade entry grew larger as it went on, the music from all of the bands was dazzling enough that it helped the time pass by much easier.

In downtown Mason City, near Central Park, at about 2 p.m., North Iowa Area Community College (NIACC) awarded an entire year of free tuition to Yanileth Guzman, Belmond, and Oscar Madong of Mason City. Guzman called it "a blessing for us who cannot afford school or think that we have missed out on our chances" while Madong said he wanted to be a "genuine inspiration to many that lose hope in pursuing big dreams." The other three finalists: Samantha Mary, Garner, Robert Putney, Rockford, and Shawn Snelling, Clear Lake, got half of their tuition covered.

Those were far from the only awards given out on the main stage at Band Fest.

Immediately following the NIACC event, student royalty was crowned from among the schools who appeared in the parade earlier in the day. Ultimately, Nathan Hannemann, Northwood-Kensett, and Hannah Lanphere, Central Springs, were announced as king and queen of the 82nd North Iowa Band Festival.

Meanwhile, top band of the festival went to Lake Mills who's now won six in a row. Well into the proceedings for the day, their fans still had enough energy to explode with applause when their school won — which goes to show that the spirit of the festival is irrepressible.

$5 for 5 months to support local journalism

Krull was one of 34 other state and local chamber executives to be selected for participation.

"Their sacrifice is why were are here," said Lake Mills native and U.S. Navy Capt. Joan Platz during the event at Elmwood-St. Joseph Cemetery.

Positive test rates are down to 4% and CG Public Health plans to conclude its mass vaccination clinic by June 11.

Several pools in the area have struggled to find lifeguards for a summer season in the shadow of the pandemic. 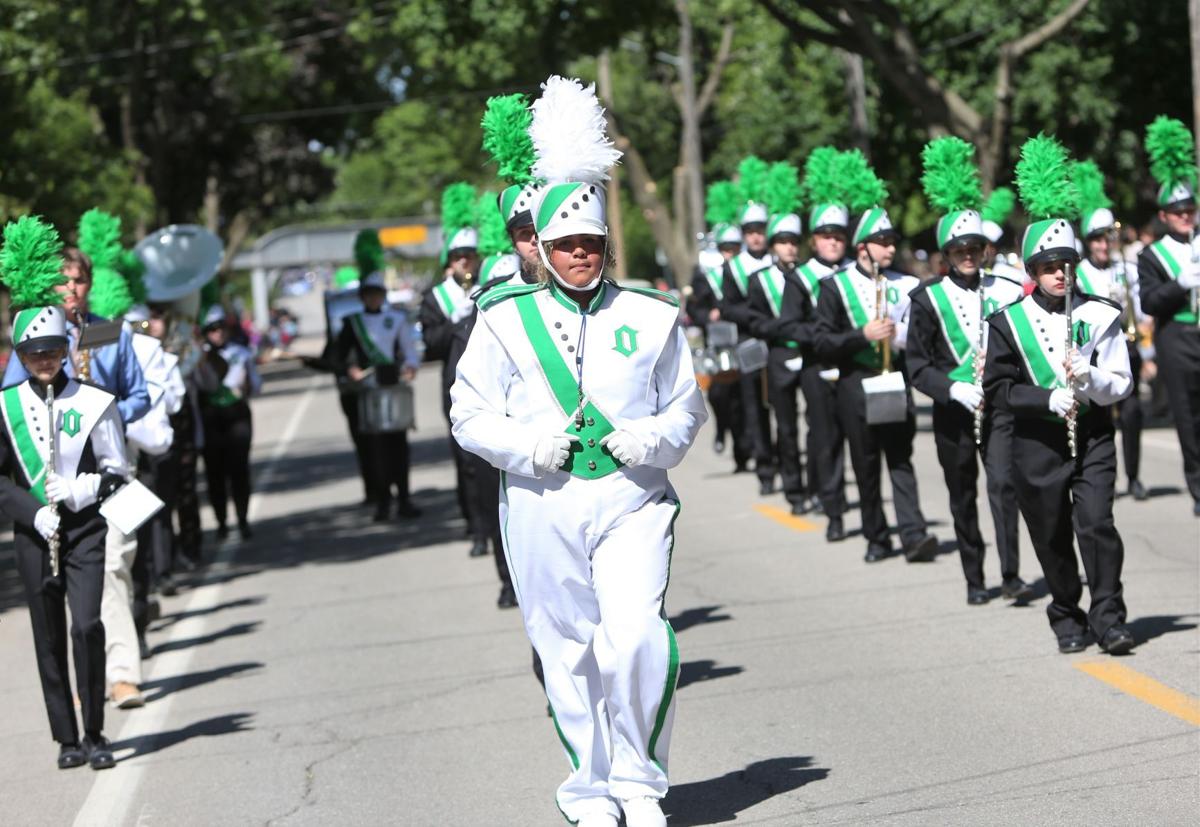 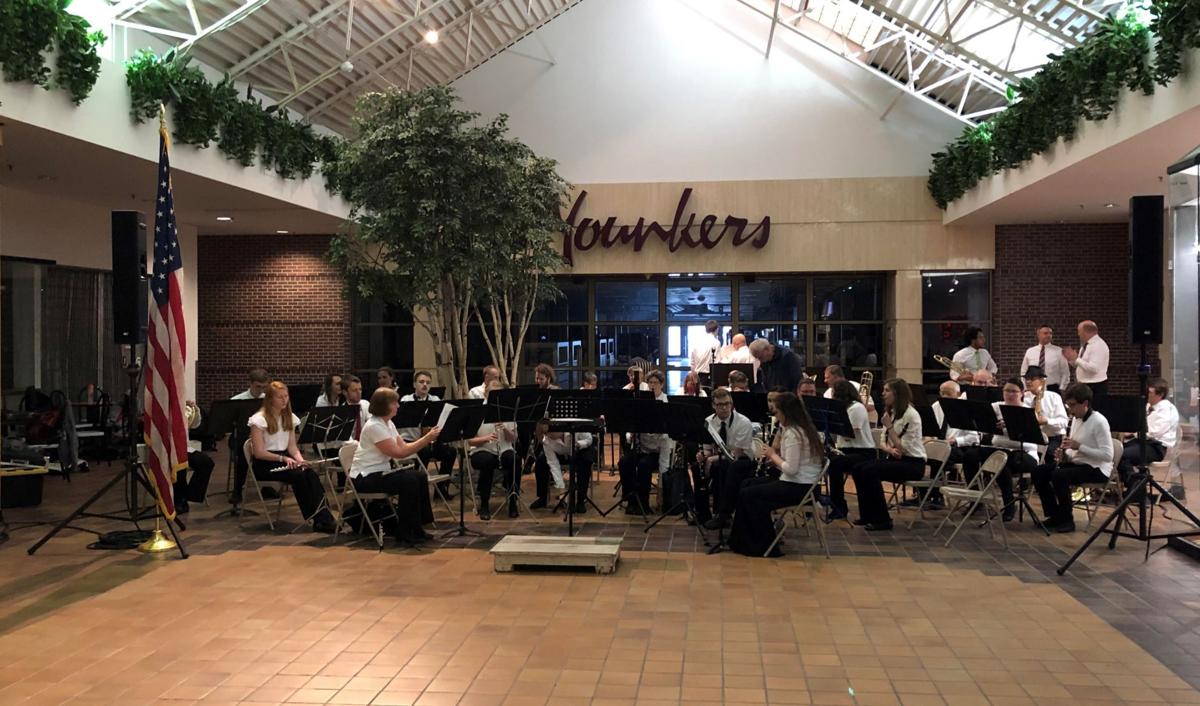 The Mason City Municipal Band kicked off night one of the North Iowa Band Festival with patriot tunes, tributes to Meredith Willson and a salute to essential workers.

Though they had to relocate because of weather, the band's spirits weren't dampened in the least as they played for more than an hour. 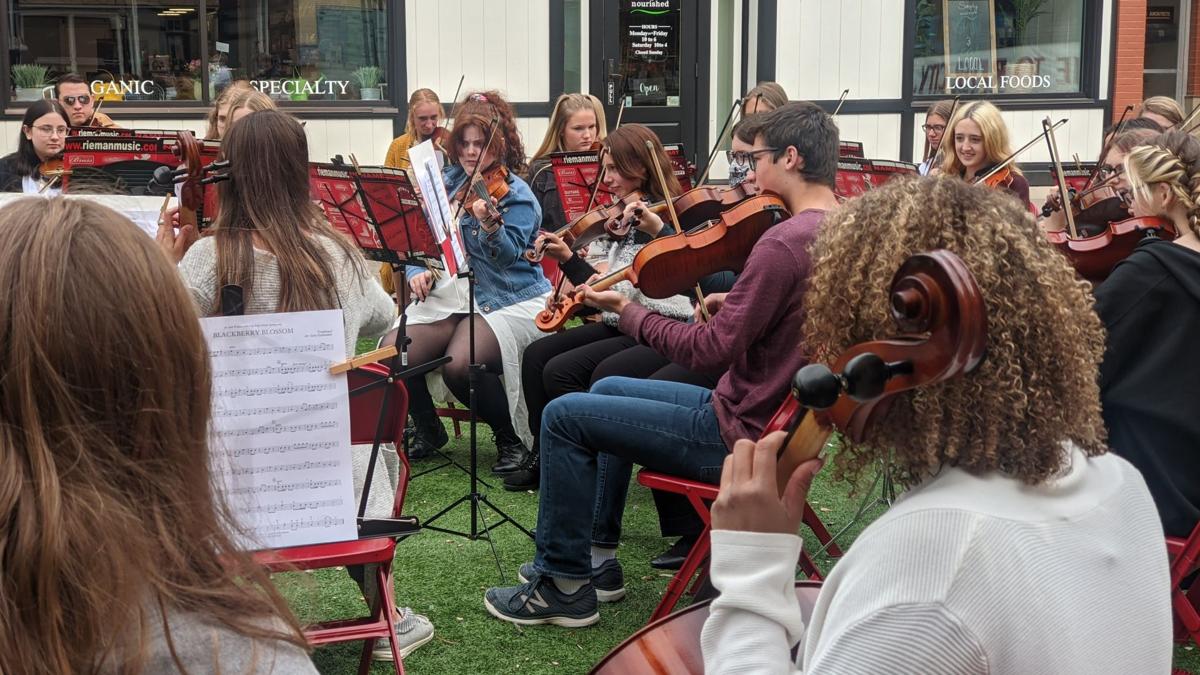 The Mason City High School Orchestra performs on Federal Plaza on Friday as part of the day-two Band Festival lineup. 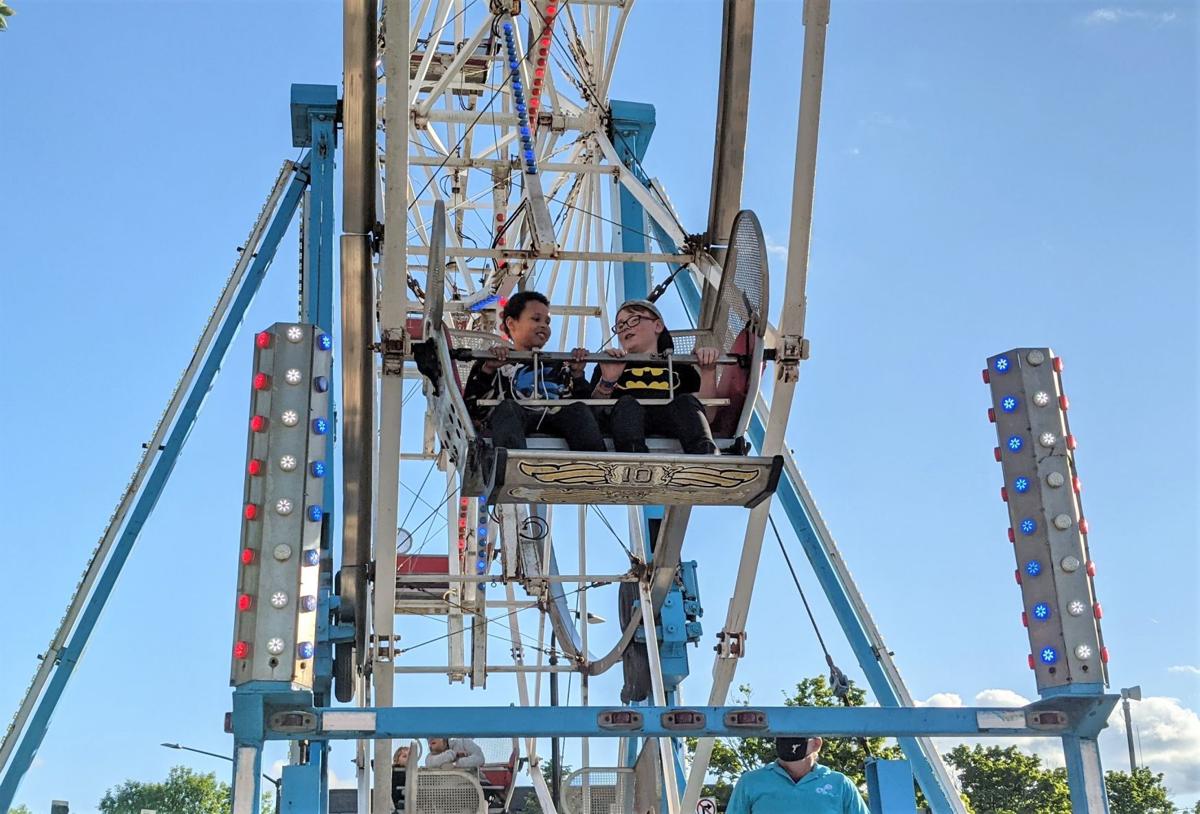 A pair of riders laugh as they circle around on the Ferris wheel in Central Park on Friday. 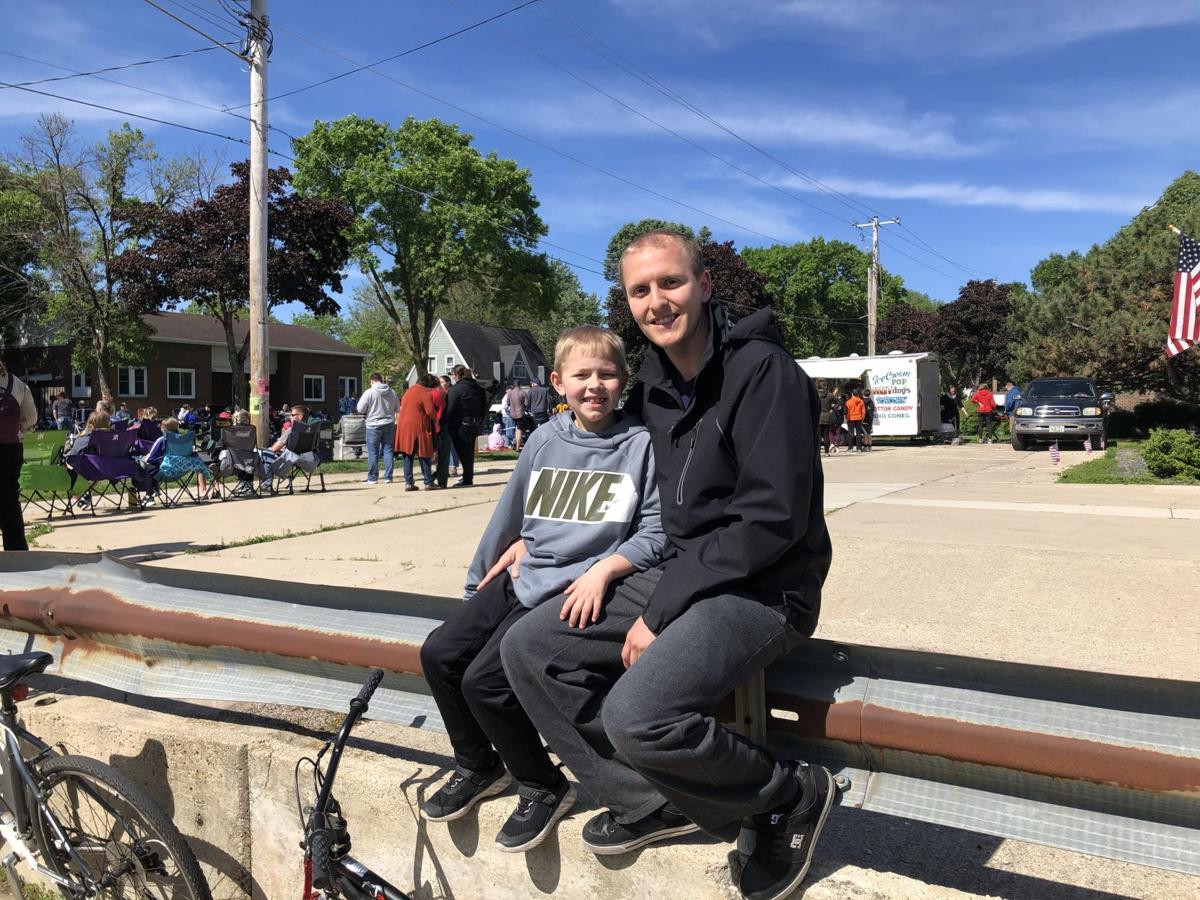 Calan, left, and Tim Stumo, right, said that they mainly came to the North Iowa Band Festival parade to watch some of the bands. Calan, age 7, had never been to the festival before. 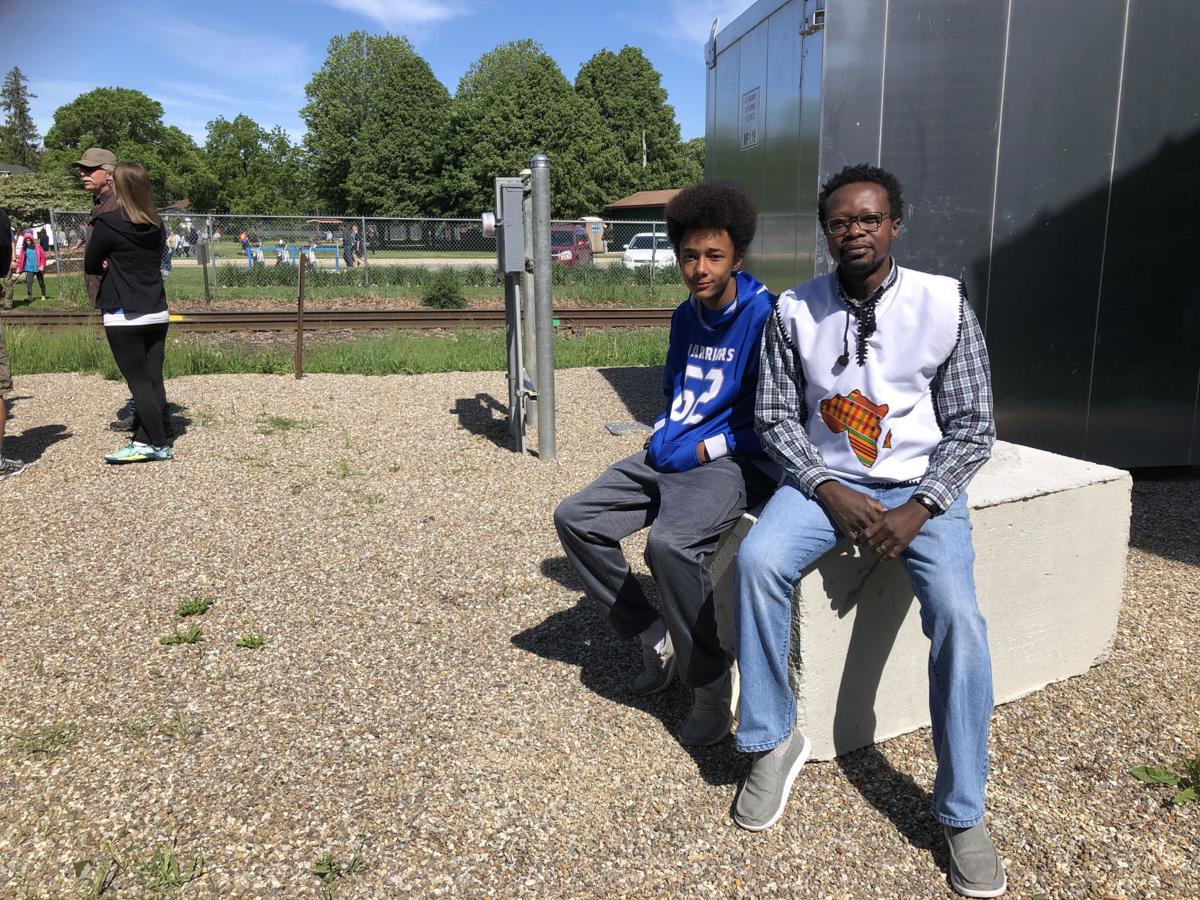 Sam Bayim, left, Charles Bayim, right, from Rockford, said two of the biggest reasons they came to watch this year's North Iowa Band Festival parade was to see the Shriners and the veterans. 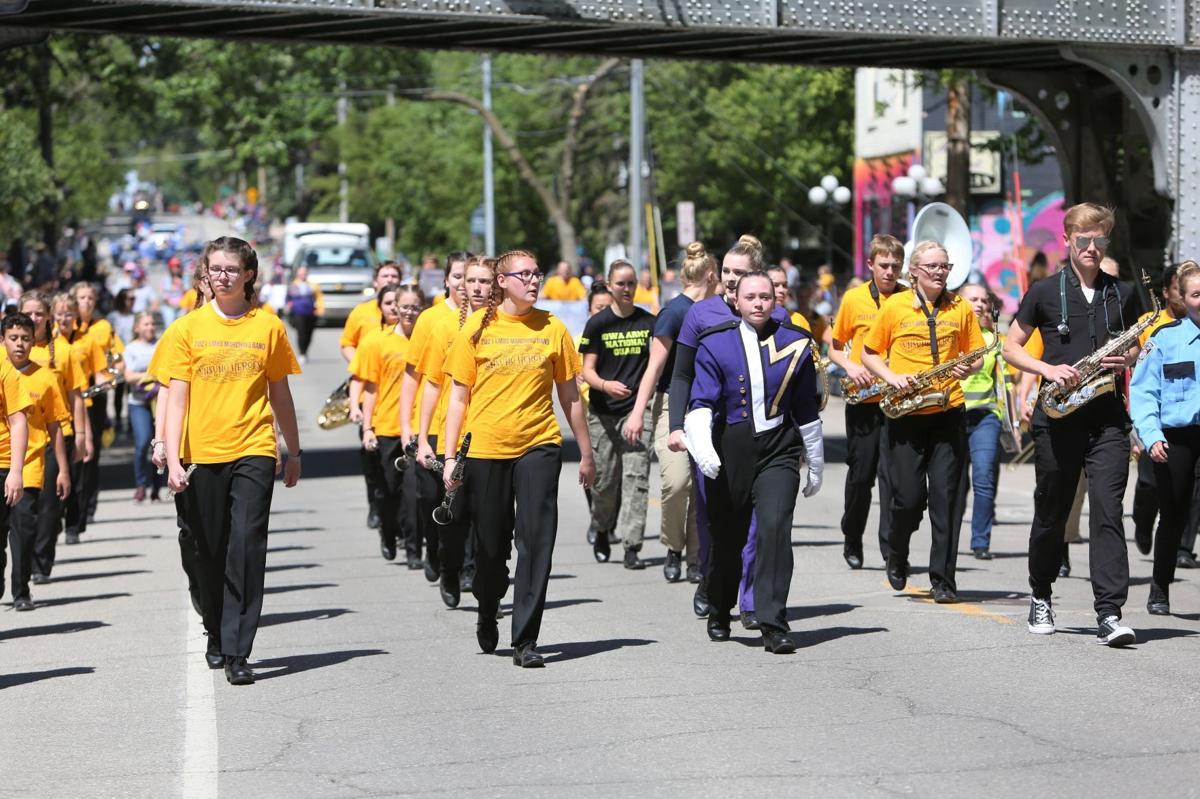 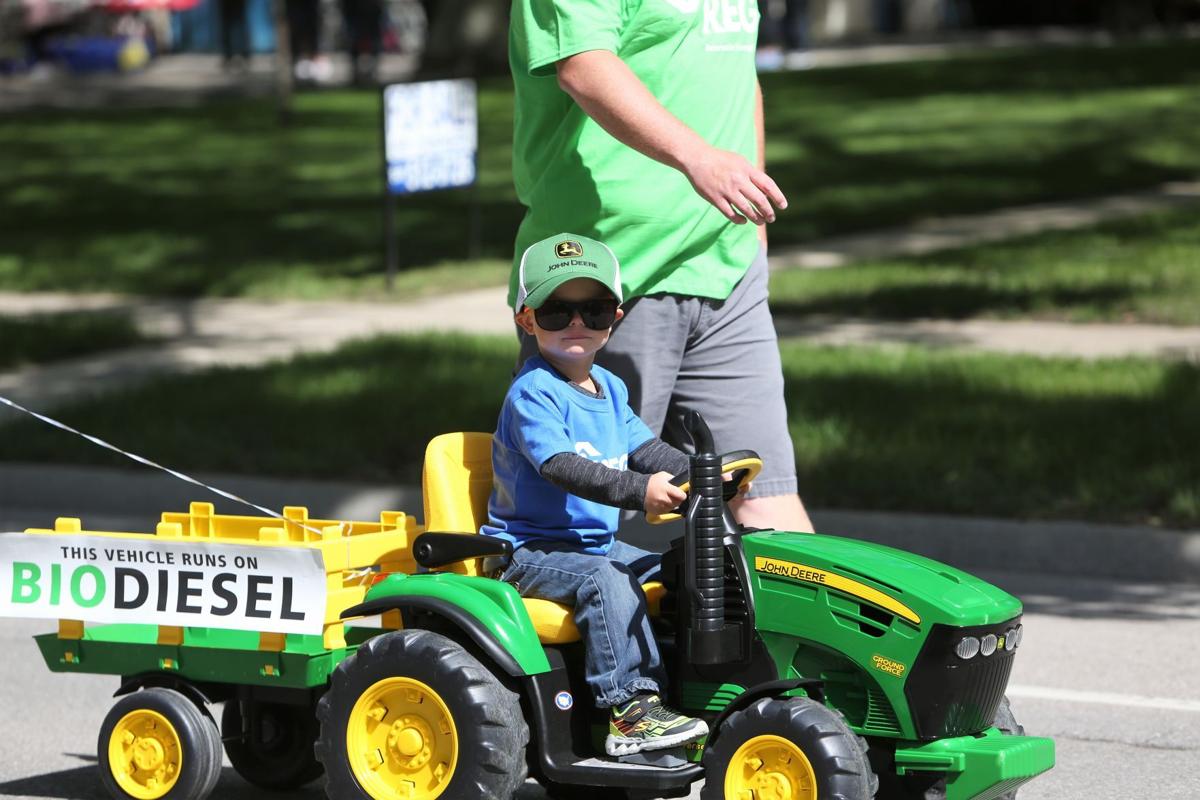 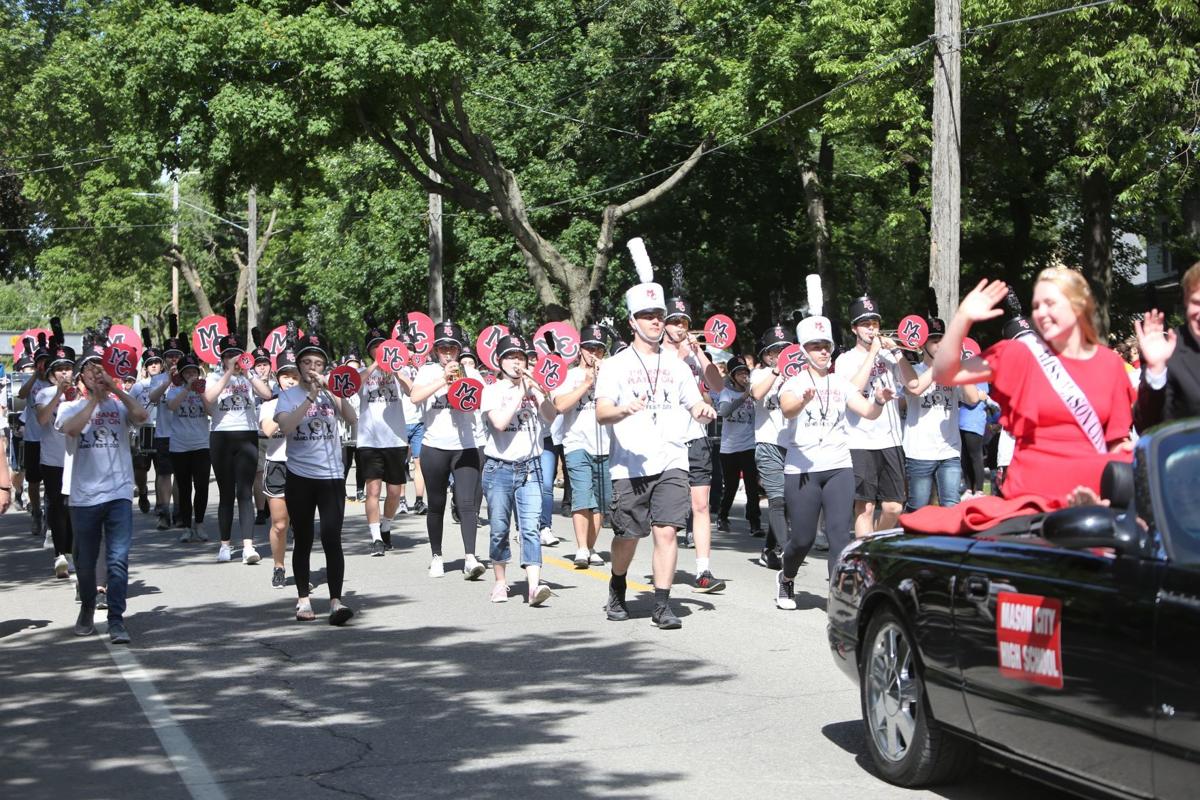 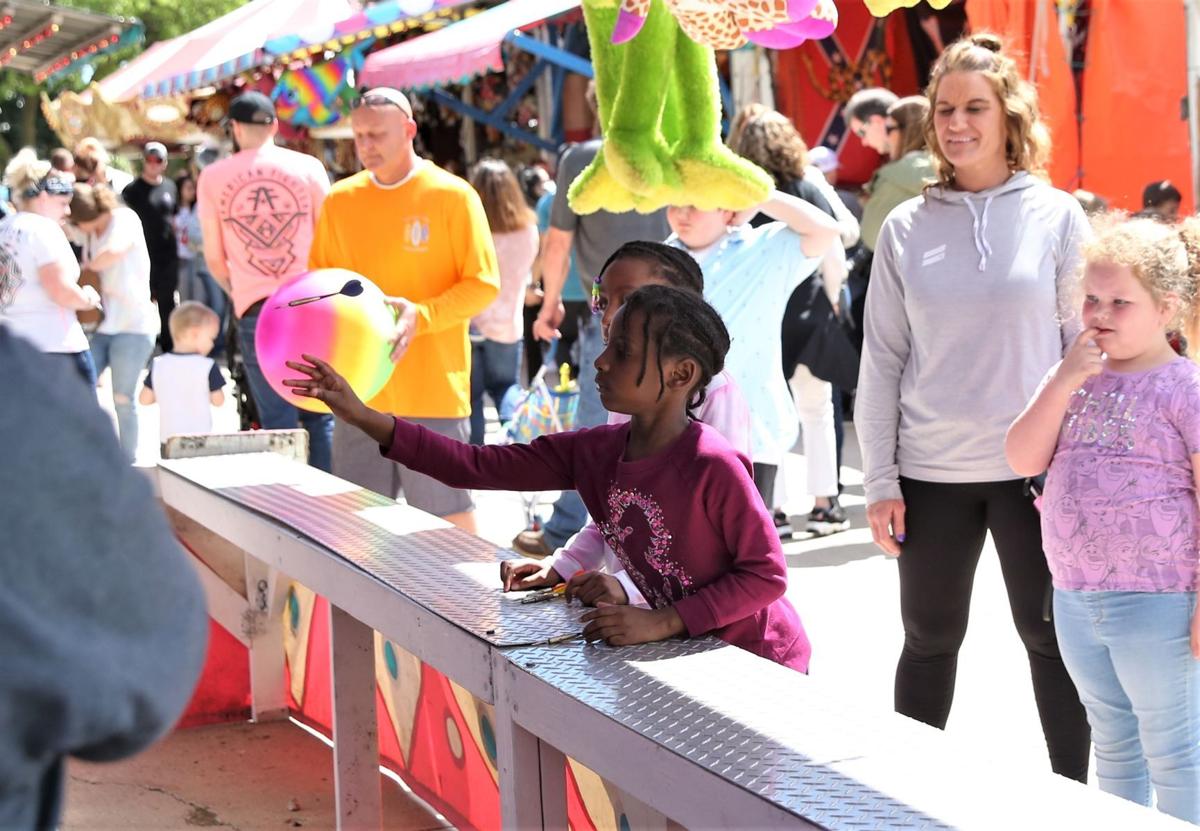 A young girl throws a dart at a balloon at the midway at the North Iowa Band Festival in Mason City on Saturday. 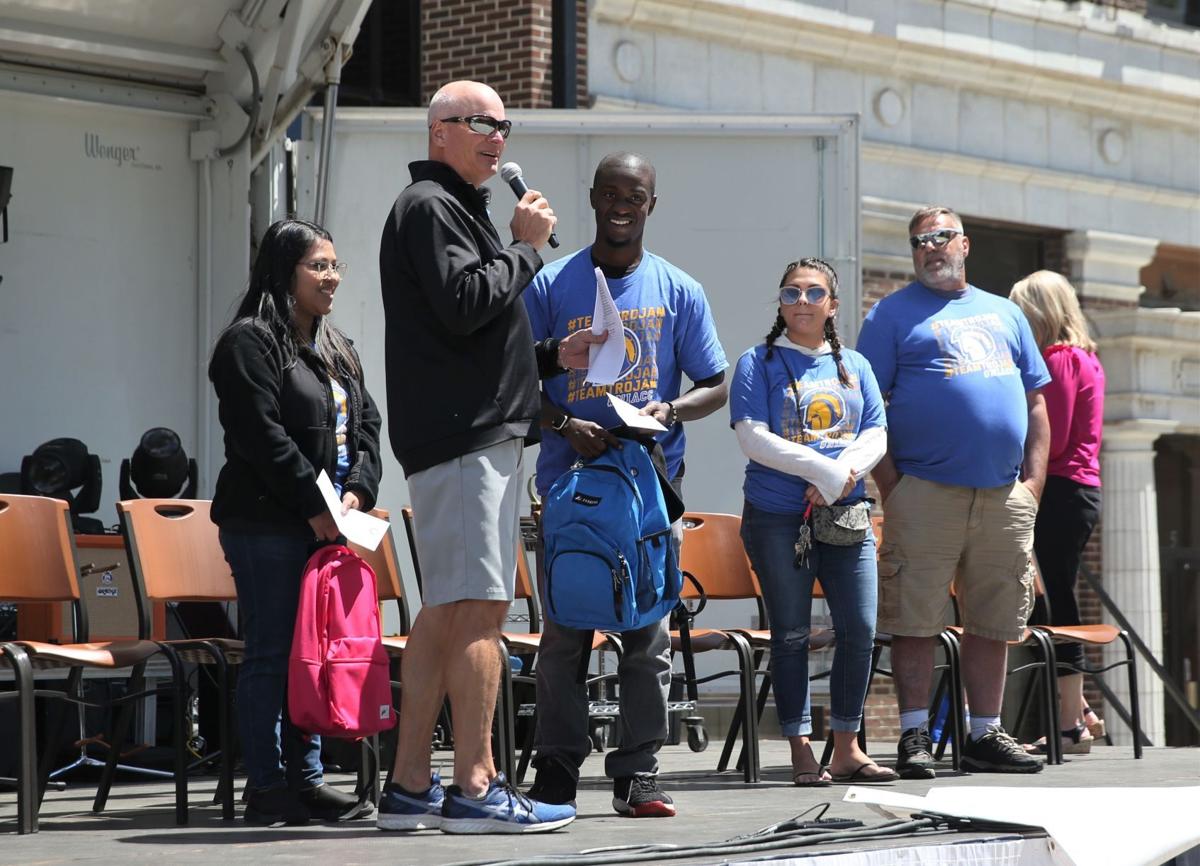