'Matilda: The Musical' premieres on Mason City stage this weekend
0 comments
Share this
Return to homepage ×

A well-known story about a young girl who dreams of a better life is taking the stage this weekend at Stebens Children’s Theatre in Mason City for the first time.

“It’s a huge title,” said Tom Ballmer, Stebens executive director. “People will know it, and I knew it would be fun and challenging for us.”

“Matilda The Musical,” a Tony Award-winning production based on the 1988 children’s novel written by British author Roald Dahl, is about a 5-year-old girl named Matilda Wormwood with astonishing wit, intelligence and psychokinetic powers who is unloved by her parents and bullied by her principal.

Fortunately, she finds friendship and support from her teachers and classmates at school.

What: "Matilda The Musical"

The musical, adapted by Dennis Kelly with music and lyrics by Tim Minchin, ended its nearly two-year run on Broadway in January 2017 after 1,555 performances.

“Matilda The Musical” marks Stebens’ third production of a Dahl novel. The first was “Charlie and the Chocolate Factory” and the second was “James and the Giant Peach.”

“He always seems to include some pretty mean adults in his books, and this is no exception,” Ballmer said. “There’s mean adults and mean parents, and for some reason, he renders them very, very comical.”

It’s the mean adults who drew Lucas Bartholomew, 16, to audition for his fourth Stebens production this fall.

He had seen “Matilda The Musical” in St. Louis over the summer and enjoyed it, especially its villainous headmistress Miss Agatha Trunchbull.

Bartholomew was cast as Trunchbull, an overbearing terror of a woman who hates children and loves thinking up new punishments for those who don’t abide by her rules.

“I enjoy playing a mean character,” he said. “I’ve actually always wanted to play like a mean character or a villain for a while, so now that I’m finally doing it, it’s been fun to kind of interact with all these other characters in a different way.”

Ballmer said the Stebens show, like Broadway, cast a male as Trunchbull.

Trunchbull doesn’t care much for Matilda, cast as Janae Hansen, 13.

“Matilda The Musical” is Hansen’s eighth Stebens production, and she decided to audition because she wanted to be a part of the show — a show in which she’s acting alongside her older sisters Kylie and Makenna and her younger brother Henry.

Hansen described Matilda as a shy, smart girl who just wants to be loved, but she’s not afraid to stand up for herself and her friends.

Her sister Makenna Hansen, 15, was cast as Miss Honey, her character’s kind, caring and loving teacher.

“I think it’s fun having my baby sister as Matilda,” she said.

The production is bolstered by a cast and crew of more than 40 members, who Janae Hansen said are perfect for their roles.

Ballmer, Bartholomew, Janae and Makenna Hansen agreed that the show is packed with high-energy dance numbers and catchy songs that the audience is sure to enjoy.

“It’s not the same as the film,” Ballmer said. “It’s absolutely the same story, but the musical added a lot of magic in it that’s a lot of fun and challenging.”

Iowa caucuses: Joe Biden offers plan to "save the soul of America" in Mason City stop

"I'm optimistic. More optimistic than I've been in my entire career," Biden told a crowd of more than 120 people at the Park Inn on Tuesday morning.

The city of Clear Lake and the Clear Lake Community School District may be nearing a partnership for a new health, wellness and recreation center.

The Wednesday morning lockdown for West Hancock schools has ended, according to its website. The district has resumed normal operations.

Gov. Kim Reynolds on Tuesday signed executive order No. 5 requiring all new contracts for the purchase of state vehicles with diesel engines to have written support from the manufacturer to use at least B20 biodiesel (a blend of 20 percent biodiesel and 80 percent petroleum-based diesel).

Looking for a way to ring in the new year? Officials with the Iowa Department of Natural Resources suggest first-day hikes Jan. 1.

CEDAR RAPIDS — A Kennedy High School teacher has been named the Iowa Teacher of the Year.

Where did the Cancun Mexican Restaurant go?

Both Cancun restaurants in Cerro Gordo County are now gone.

Weather: Next week to bring colder temps to Iowa

Enjoy the nice weather while you can: by next Tuesday, it'll be noticeably colder.

Jamie C. McFarland, of Mason City, evaded arrest Wednesday night after a pursuit that ended in a crash, the Mason City Police Department said in a release. 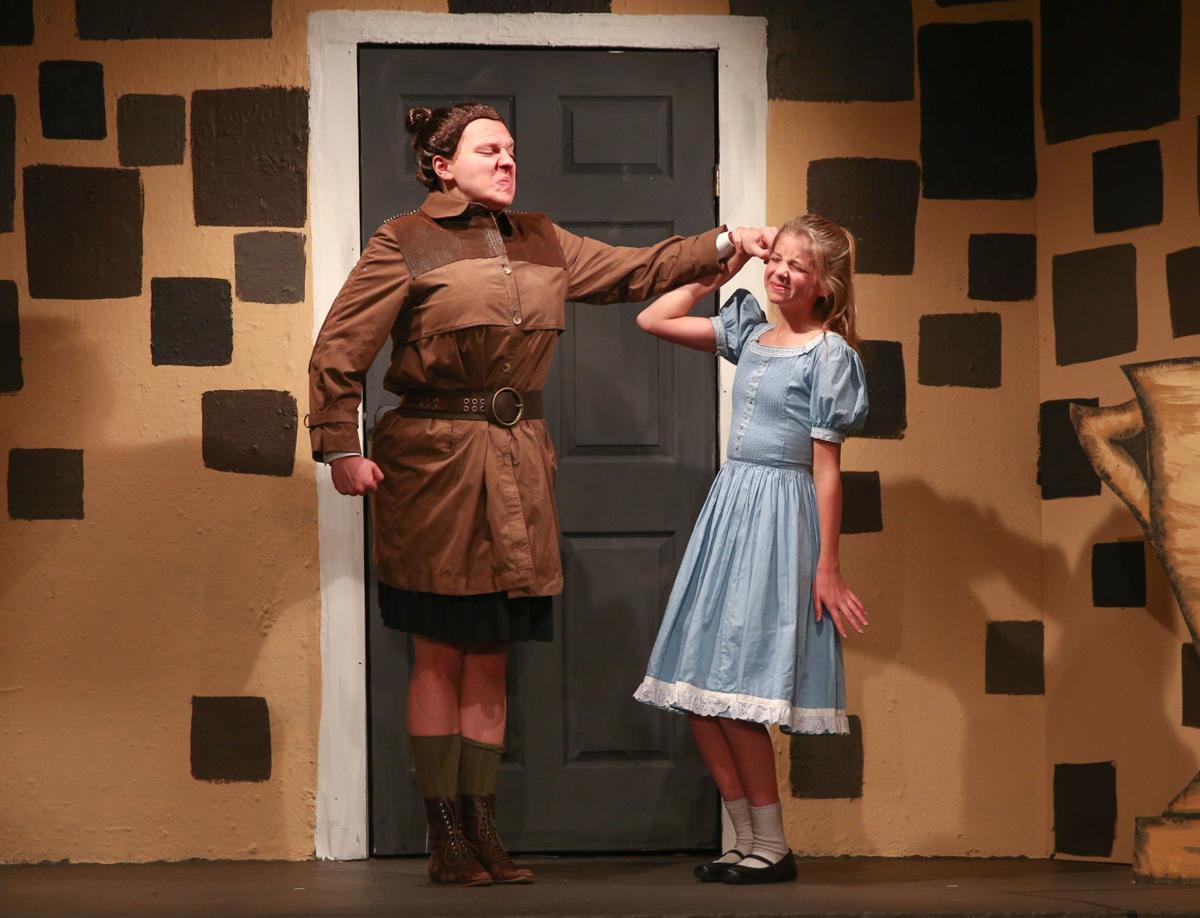 Lucas Bartholomew as Miss Agatha Trunchbull (left) and Janae Hansen as Matilda Wormwood act out a scene from the play "Matilda" at Stebens Children's Theatre on Monday. 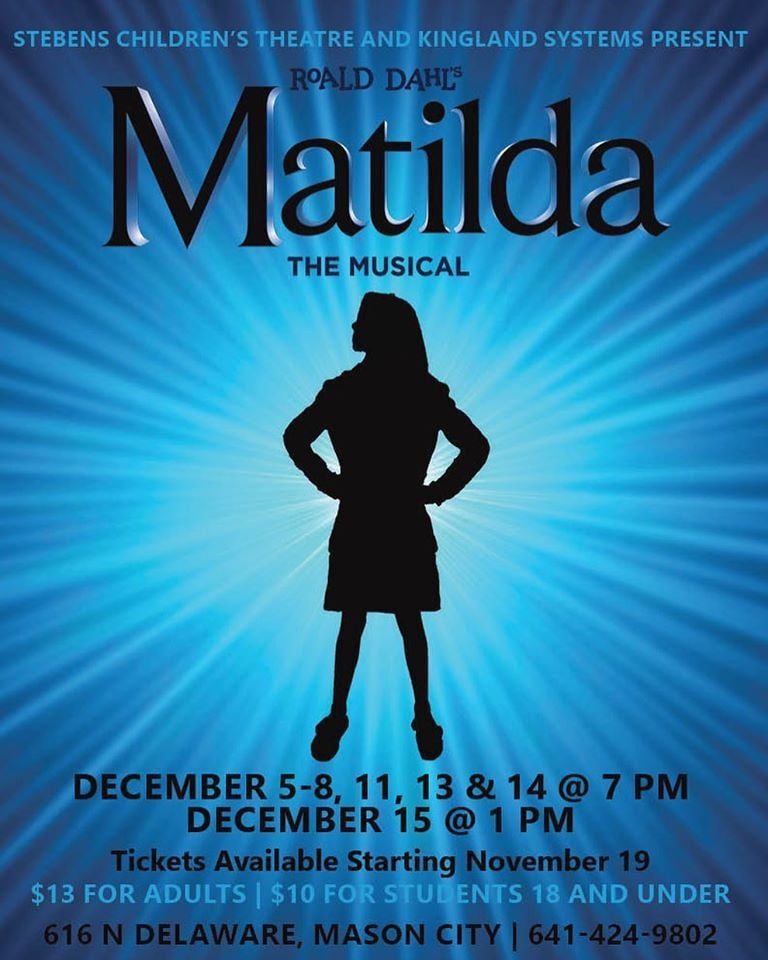