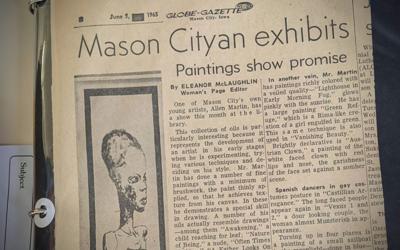 When 82-year-old Mason City resident Allen Martin was a young man in Philadelphia, he took a break one day from his job at an ice company that permanently rewired his brain.

It was the early-1960s and Allen had just gotten out of serving in Army reconnaissance in Germany. Outside of the military, Allen said it was the first real job he had. But, based on his later career path, it didn't entirely suit his interests.

So when he got out of the office that day, Allen trekked to the Philadelphia Museum of Art. The place didn't disappoint.

"I walked in there, turned the corner and I’ve never seen anything so neat in my life," Allen said.

One particular artist's work stood out to Allen so much that even nearly 60 years later, he can't stop talking about him.

"I can see it in my head but I can’t remember the name. That was the first time I had seen an Andrew Wyeth painting," Allen said.

The experience was so engrossing for Allen that not only did he miss the rest of work that day he felt the urge to follow his own artistic muse for decades after that. He chased it through various mediums, such as oil paintings, metalwork and photography, and opened his process up to the public through sales at "Art in the Park" events, displays at local schools and shows at the Charles H. MacNider Art Museum.

For as long as his younger sister Christine Martin Epstein can recall, Allen always had artistic inclinations of one kind or another. Christine can recall Allen taking photographs and painting pieces to show to other family members.

Of some of the earliest pieces Christine remembers Allen making, one that stands out is a piece inspired by none other than that regionalist painter from Pennsylvania, Andrew Wyeth.

"It would be 'The Bucket on the Wall,'" Christine said. "There is a hammerlike item hanging next to it and that one is always the first one to come to mind. That one is always the one that stands out." She can't say why it is that that's what first comes to mind of Allen's art but it does.

In some ways, the household that Allen and Christine grew up in wasn't wholly different from the one Wyeth was raised in. Wyeth had four siblings and a father who was an illustrator. Two of Wyeth's sisters were artists in their own right and another was a composer. His only brother became an inventor as an adult.

The Martin siblings totaled eight. Their dad, Edward Clarence Martin, worked in podiatry as one of the earliest Black doctors in Mason City (along with Dr. John D. Reeler who Martin purchased the practice from) while their mother, Berlina, played organ at Our Saviors Lutheran Church. Christine didn't much enjoy painting, she said a teacher once alleged "She rushes through her art so she can read," but she did enjoy music. As did her sister, Cynthia, who sang and her sister, Melanie, who played drums. Christine played euphonium, a brass instrument similar to a baritone horn, as did Allen and she said she met Meredith Willson when she was a kid.

"Our mom kept us busy," Christine said. "Everybody had to do some kind of music until they were in junior high... It was a way for mom to keep us busy doing positive things beyond our chores."

Make what you know

When Allen made it back to Mason City, he got a gig as a surveyor. And when he had downtime during that work he would sketch what he saw or snap photos of it.

One fall, Allen did a lot of work in Charles City and the 40-minute ride out every day led to Allen drawing the road.

"I used to sketch that every day," Allen said.

Along with the Wyeth experience in Philadelphia, another case of someone sketching during a work reprieve is an artistic memory that looms large for Allen.

"When I was in Germany, there was a guy in the barracks in his bed doing some drawings and I thought, 'What the heck are you doing?'" Allen said. "(And he drew a) perfect 1956 Thunderbird. He used to work in Dearborn (Michigan) and was in the art department of the Ford Motor Company," Allen said.

Allen wasn't the only one in the family who got into military service. That kind work is as much of a family throughline as creative pursuits were.

Christine said that the family has a step-great-grandfather who served in the Union Army during the Civil War. Along with three brothers in the Army, Allen, David, and Peter, Christine had a brother, Richard, who was in the Air Force. (From Allen's recollection, he went off into service on "The Day the Music Died" and caught Buddy Holly, Ritchie Valens and the Big Bopper at the their final show at the Surf Ballroom the night before.)

An uncle, Robert L. Martin of Dubuque, was a member of the Tuskegee Airmen and flew on at least 63 combat missions during World War II. In 1944, he had a crash landing in Italy but survived. This past week, the Dubuque City Council honored Robert for Black History Month and there's a push to rename the airport after him.

As he talks in his apartment at the Shalom Tower senior-living complex in downtown Mason City, Allen is wearing a hat that pays tribute to his uncle's famous unit.

He doesn't paint anymore. Nor does he do metalwork of strange gray fish and giant eagles. His photography habit has also subsided. There's a simple reason for that: His hands don't work like they used to do.

But that doesn't mean that Allen isn't still inspired in the ways that he was when he used to create.

He said he continues to find joy in everyday parts of life. Where that once meant being moved to paint a picture of his three-year-old daughter on the front lawn it now means looking out the window of his seventh-floor residence and wondering what the vultures nesting nearby are up to. That's more than enough of a thrill. As is taking the elevator downstairs to smoke a green American Spirit cigarette. He doesn't have regrets that he rattles off and he doesn't think too much about how he'd like for himself and his work to be remembered.

"Doesn’t make any difference to me," he said.

Christine, meanwhile, just wants her brother to be remembered.

She doesn't want the community that her brother has called home for most of his life to forget him and others like him who did memorable things just because they did those things decades ago.

"There’s a lot of history where you live and you need to know about it. When you look at Mason City, when I talk to my brother, there were a lot of things we as Mason City people took for granted. We’ve had a lot of talent in Mason City and there’s a whole generation who may not know who we are. It’s right there and you don’t see it."

The Mason City Community School District staff finally has its opportunity to receive the COVID-19 vaccine.

The North Iowa Band Festival is coming back to River City.

A Floyd County-based organization that includes multiple law enforcement and emergency agencies is the subject of one of the latest audits released by the state of Iowa.

Dozens of participants took to the aisles of Hy-Vee West in Mason City Tuesday morning, speedily stuffing shopping carts with food and household supplies during the Farm Bureau Grab and Give event.

Charles City officials are looking to turn a little more than a third of a mile of underdeveloped residential space near 11th Avenue into a bike trail connection that would help solidify a trail system it's been building up for several years now.

"We have been asking for more vaccine and our team’s preparation for this is paying off," said Karen Crimmings, the Disease Prevention and Health Promotion Manager. 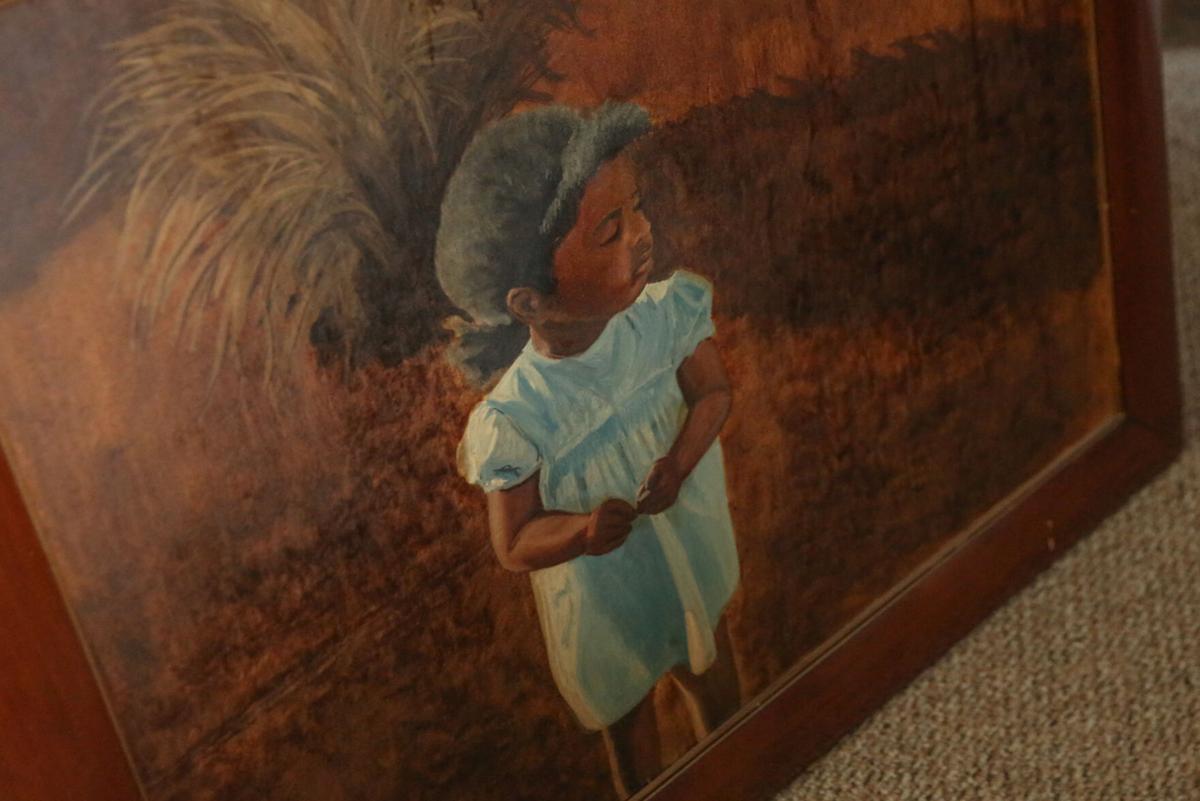 Allen Martin painted portraits of his children when they were young. This piece of his daughter was inspired by seeing her dismayed after other kids in the neighborhood abruptly stopped playing with her one day. 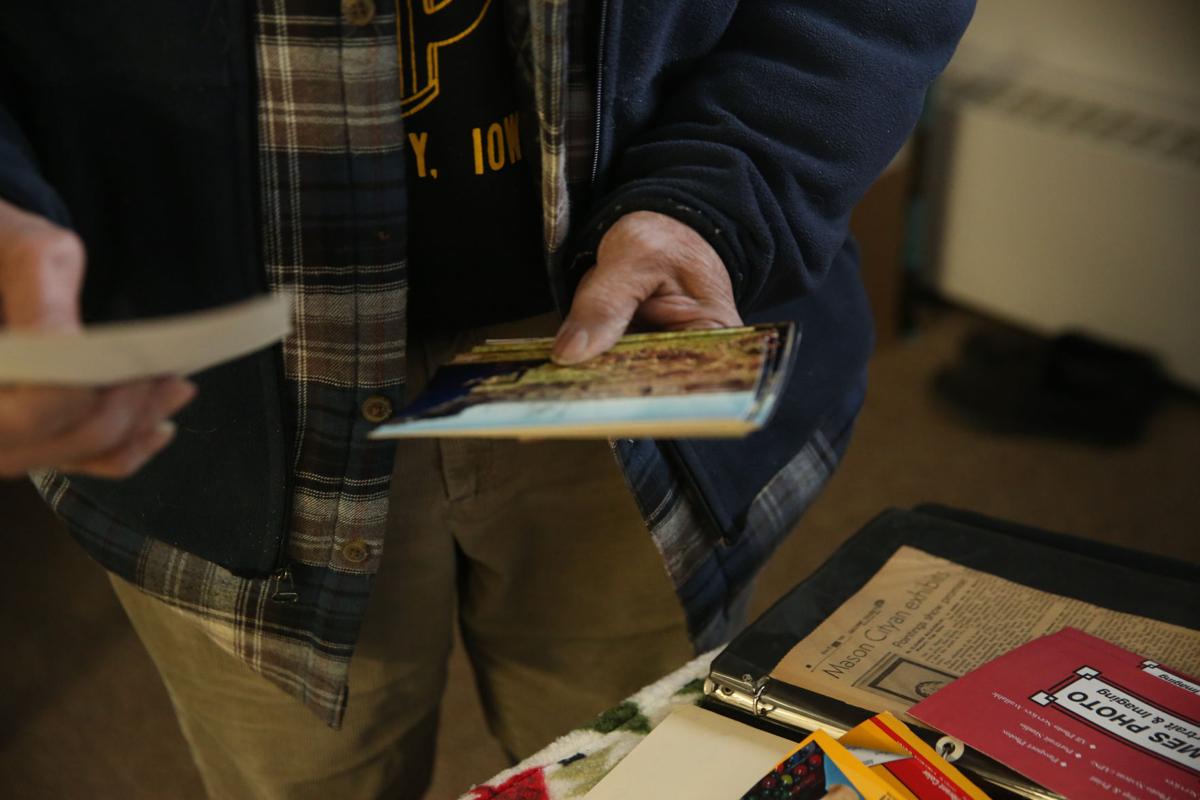 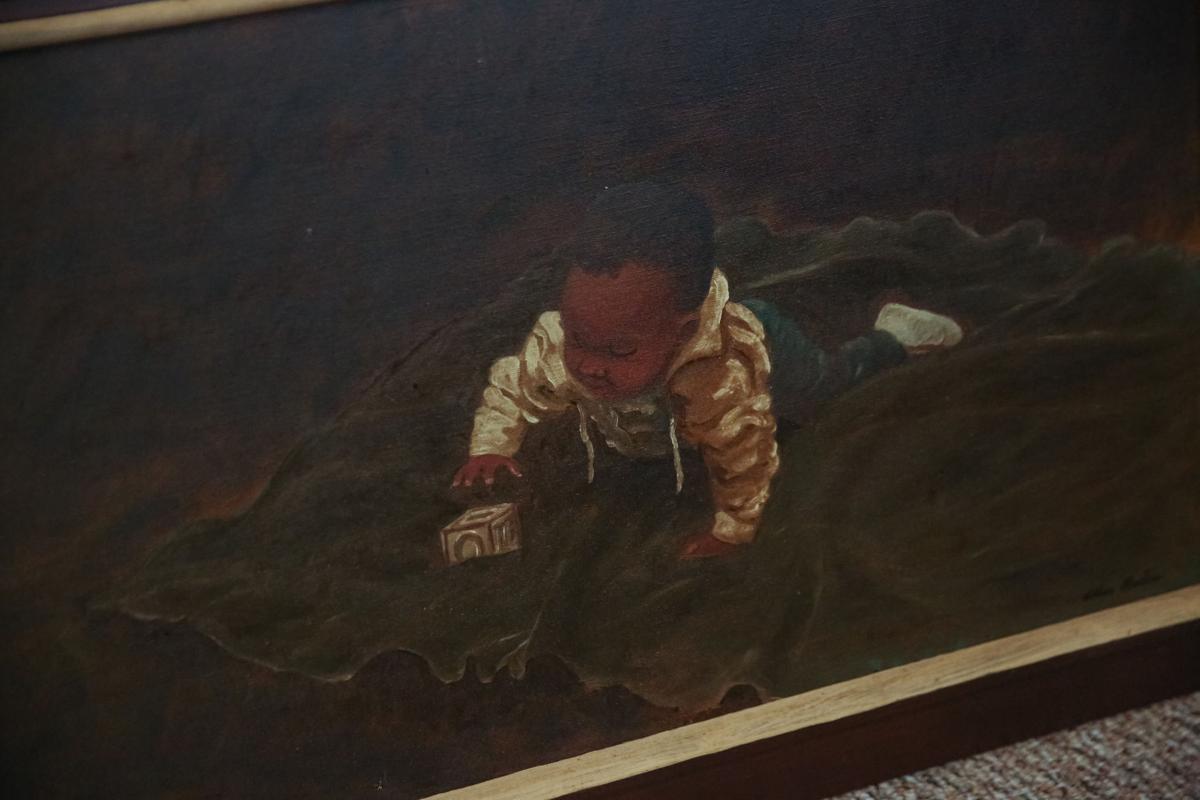 Allen Martin painted portraits of his children when they were young. This piece features his son, Allen, playing in the house. 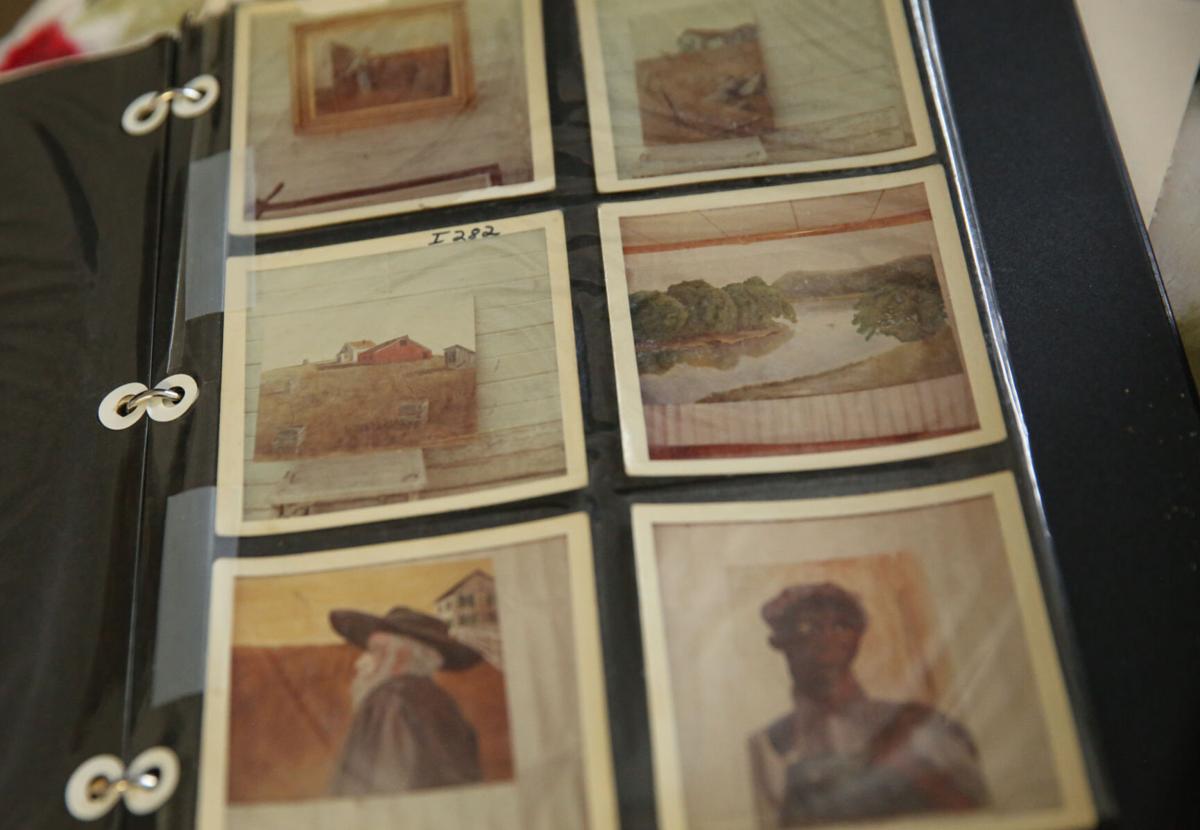 Mason City resident Allen Martin keeps an album of photos of his sketches and paintings. One such sketch, middle right, shows a bend in the Shell Rock River near Clarksville. 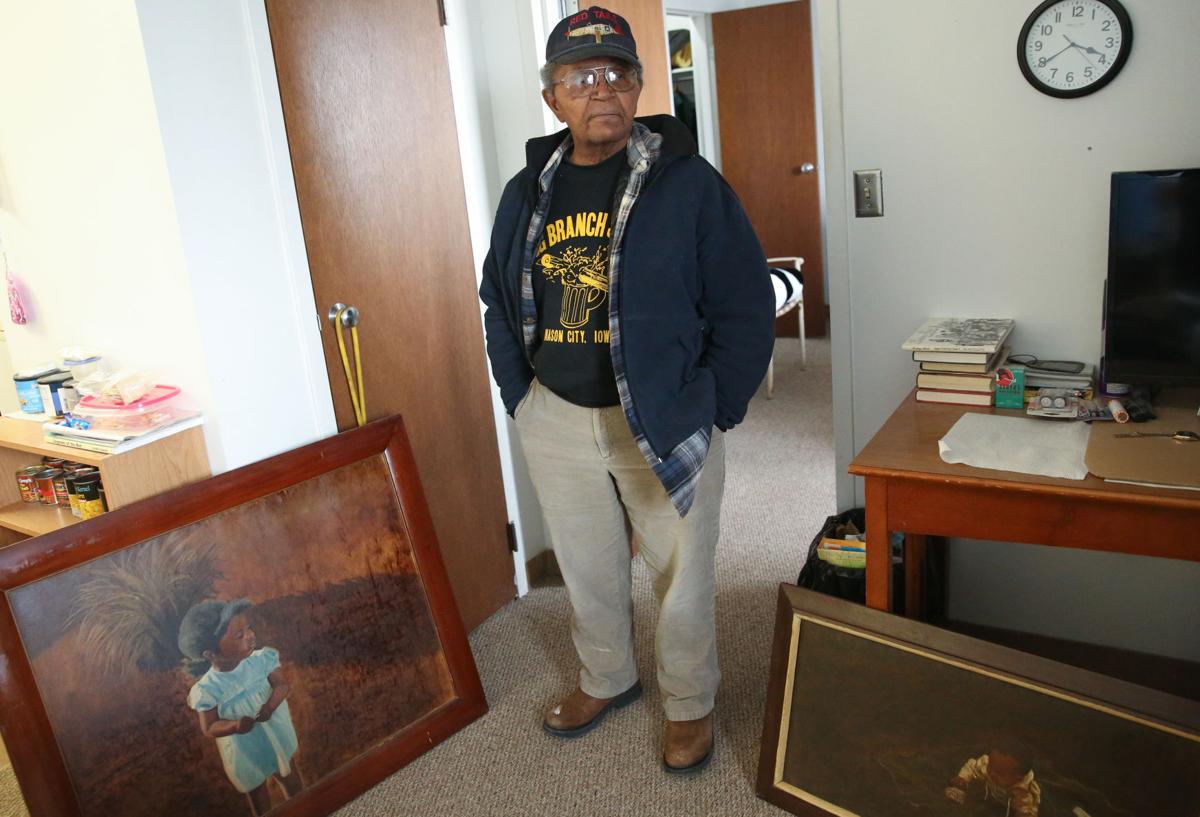 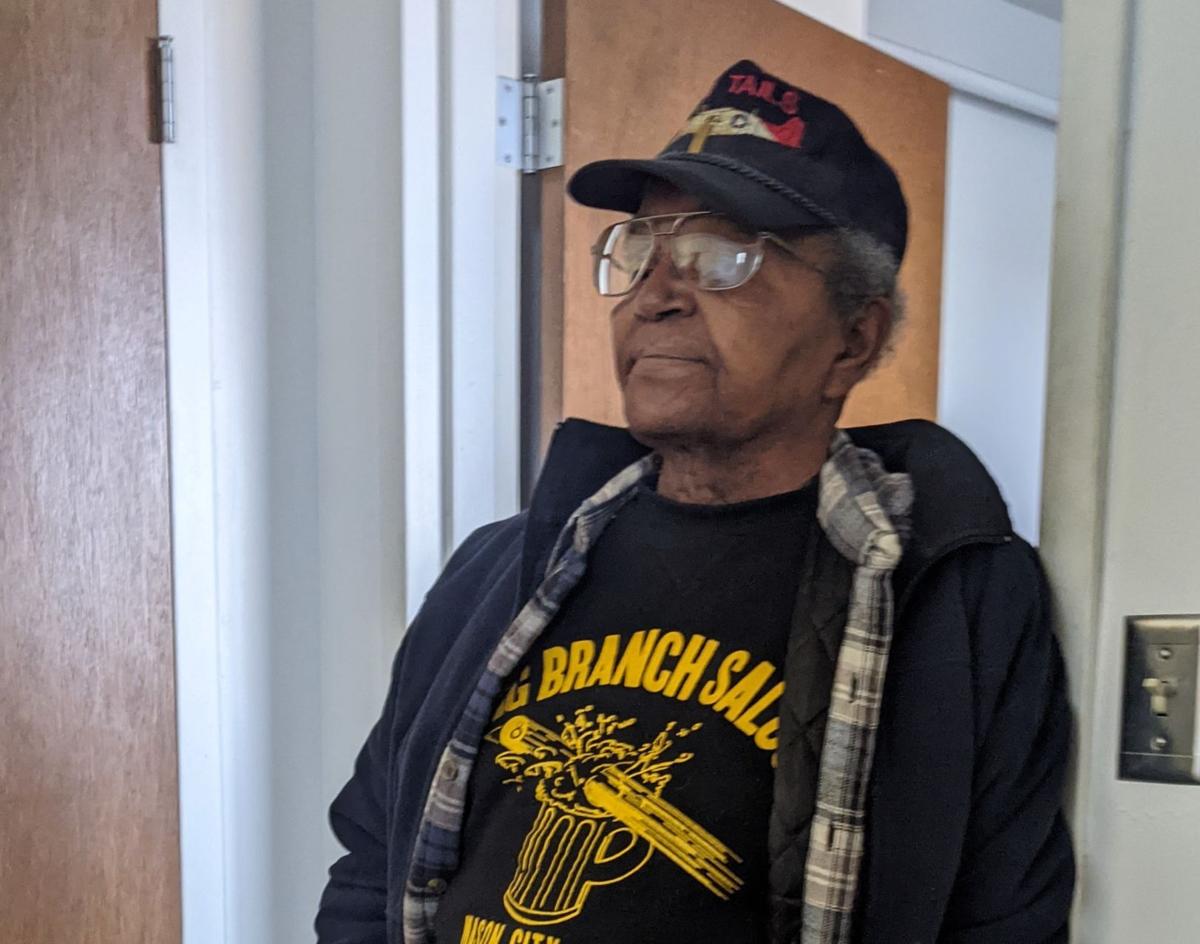 Mason City resident Allen Martin stands in a doorway in his apartment at Shalom Tower.