Skip to main content
You have permission to edit this page.
Edit
Return to homepage ×

When the Mason City Community School District announced it was conducting a hybrid return to school this fall, leaders in the district knew that internet access would be a necessity for all families in the community.

In August, the district said it would run a four-day school week with two days in-person and two-days online. Because of this, much of the classwork would be done online, and the school district needed to make sure that all students had access to it. 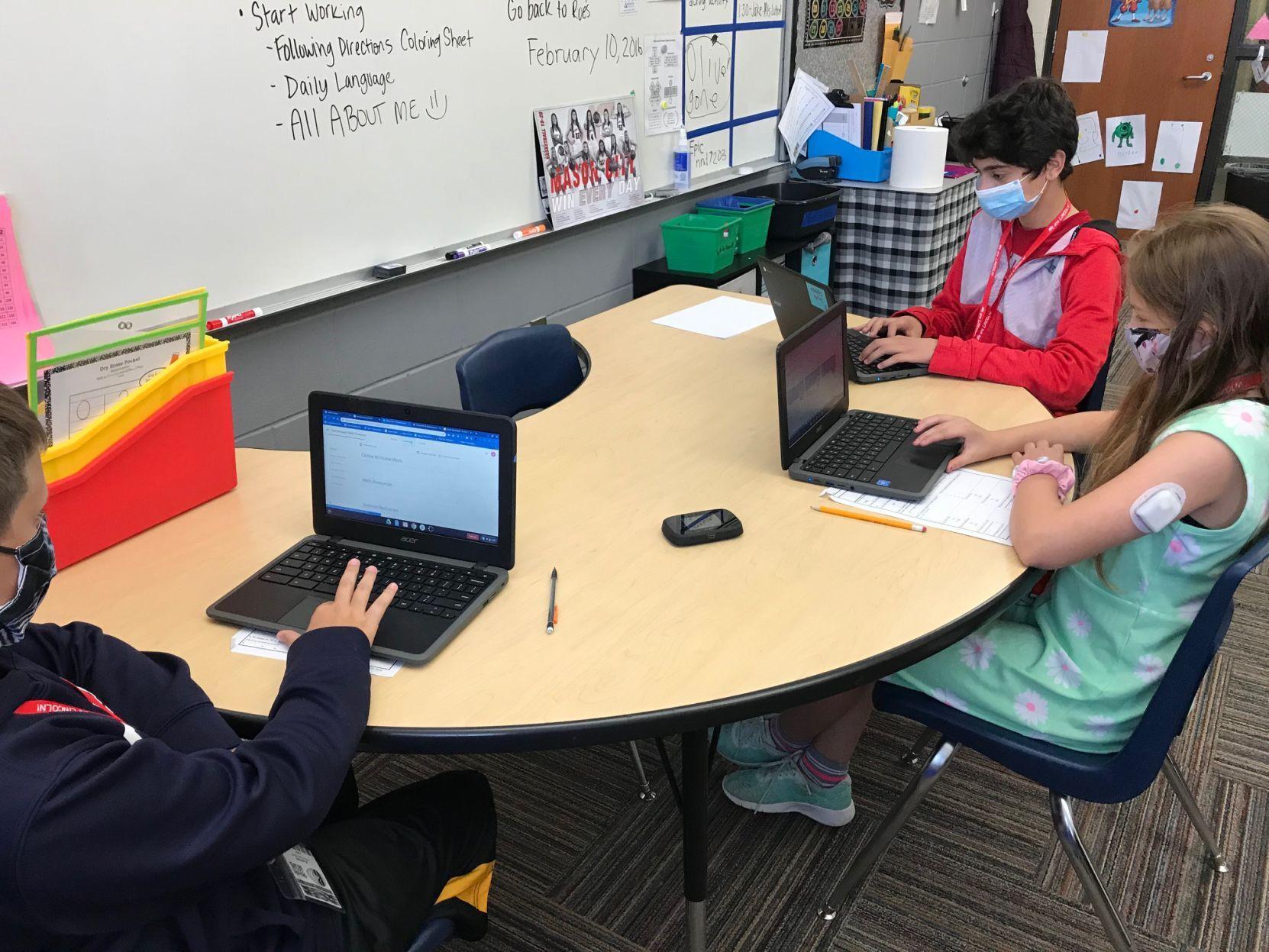 How could students who didn’t have Wi-Fi at home access their classwork? Hotspots.

The district used funds from the Elementary and Secondary School Emergency Relief Fund to provide up to 300 hotspots for families in the community. According to Executive Director of Curriculum and Instruction Susan Pecinovsky, the district has issued 295 of the 300 available hotspots. Around 20 have been used in the schools, and 275 have been given out to families in the district.

“It’s been excellent because what it does is it allows children to access their content for learning when they’re not in a face-to-face learning environment,” Pecinovsky said.

The district sent out a technology survey during the spring in conjunction with the Iowa Department of Education to assess the levels of access that families had to Wi-Fi.

“And from that, it confirmed what we knew, which was that in some cases, we had families that did not have internet access,” Pecinovsky said. “If we were going to be able to provide an equitable education for children, then we had to think about how we could provide opportunities for internet access. The idea for hotspots came out of those conversations.”

The U.S. Cellular hotspots have been distributed by the district and are easy and simple to set up. There’s no need for professionals to visit homes and install them, as it’s just a small device. 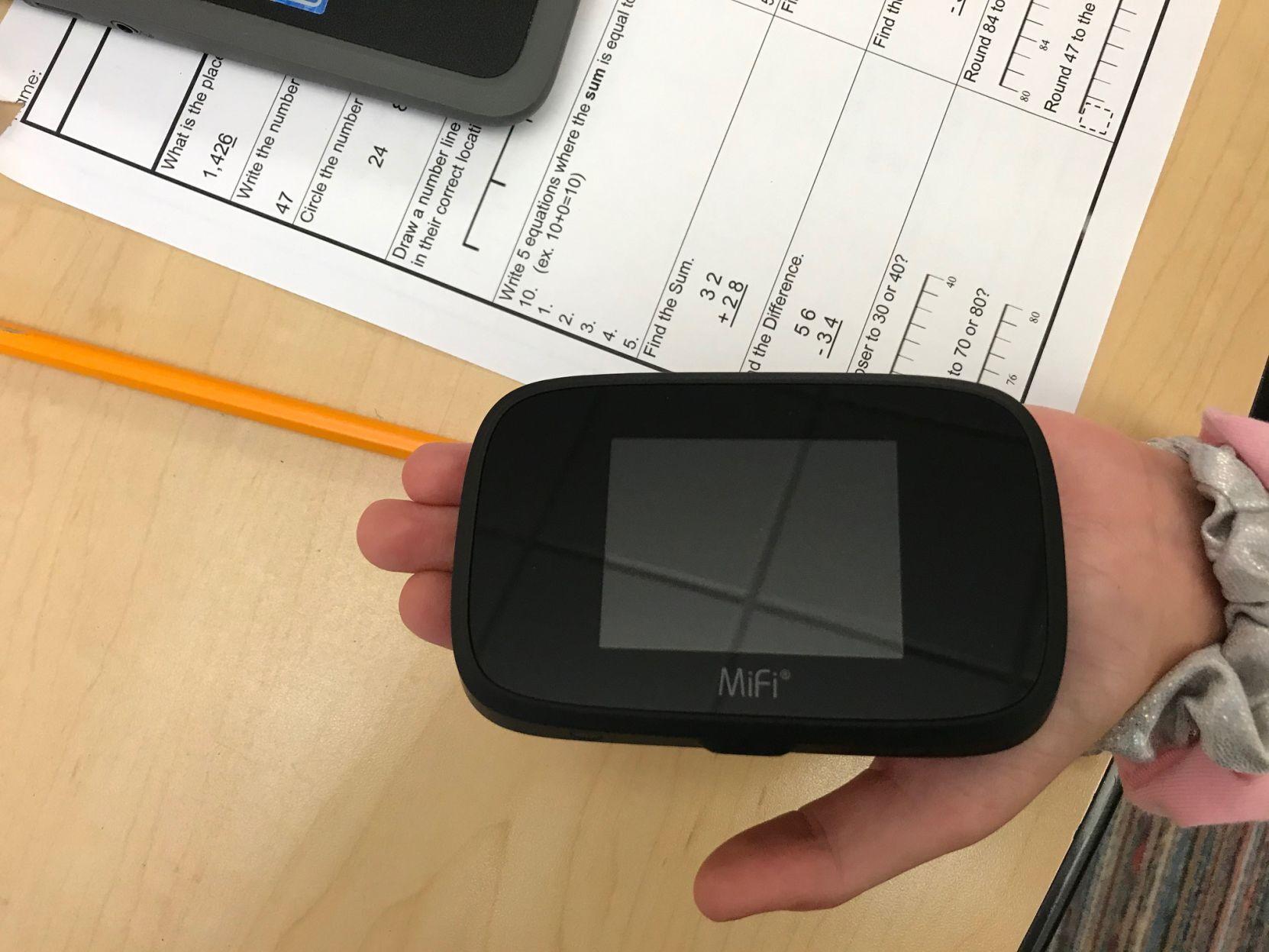 Mason City schools have given out close to 300 of these handheld hot spots.

Superintendent Dave Versteeg shared at the Sept. 7 Board of Education meeting that the community feedback has been positive and the project is going well.

“We’ve been able to help people out as they’re doing the continuous learning and teaching the class online,” Versteeg said. “That’s the worst thing that can happen is have no internet. So that’s going really well and we can get more if we need to.”

Annalisa Miner, a community member, is thankful that the district is doing this for students and families who need it. She helped her neighbors go through the school district and get set up with one.

“This family is so appreciative of the school doing this,” Miner said. “They have a freshman daughter who was just overjoyed that she had the internet because she’s never had it at home. She’s had to go other places to try to get online and they’re just so appreciative and so thankful that the school is helping them.”

In order to continue to keep the hotspots up and running, there will be more expenses. Pecinovsky says additional federal technology funds will be used to support the ongoing monthly costs associated with giving students network access.

“It’s our plan that families will continue to have access to these hotspots,” Pecinovsky said. “It isn’t a situation that we’re going to provide the hotspots and then not have the students be able to access it.”

The district is now a few weeks into the hybrid start to school. Pecinovsky says there’ve been some ups and downs in the online part of learning, and that the goal is to always to think about the future and plan for on-site learning.

“We also believe this is an opportunity,” Pecinovsky said. “What can we learn from this that we’ll want to continue to provide to our students, regardless of the structure moving forward?”

Even in the hybrid learning model, many families in Mason City can successfully stay educated with the help of these hotspots. 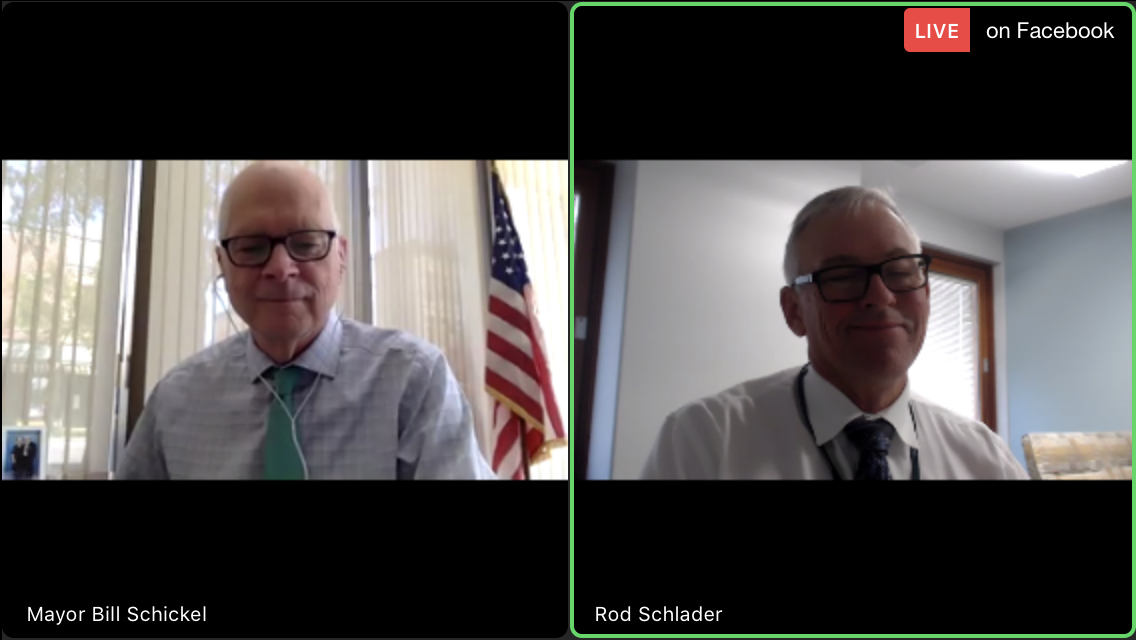 When Mason City and Cerro Gordo County Public Health officials held some of the earliest press conferences in March to keep residents informed about the then nascent COVID-19 pandemic they made sure to include MercyOne North Iowa Medical Center President Rod Schlader.

Six months later, the hospital chief executive returned to chat with Mayor Bill Schickel about what staff had learned over six months and where the facility currently stands in relation to COVID-19.

According to Schlader, right now, MercyOne North Iowa currently has 14 patients that are hospitalized from COVID-19 which is down from a peak of 27 during the worst days of the pandemic in Cerro Gordo County.

"It's been consistent... We haven’t seen that change and that probably tells us a little bit about the disease as well," Schlader said.

In part because of that kind of steadiness, Schlader told Schickel that MercyOne North Iowa hasn't been overly strained. There isn't a shortage on beds and the hospital is actually adding eight more to accommodate for any potential surge.

Right now, Schlader shared that a bigger issue for the hospital is one aspect of testing.

"We have good capacity for testing, in-house," he said. "It’s not as fast as we’d like to see in the field, in terms of turnaround time."

But even that, MercyOne North Iowa is working on. Schlader said that the hospital is working on securing two Abbott testing machines that can bring results back in minutes rather than days with the caveat being there's a slight reduction in test accuracy.

As far as what big lessons Schlader has learned over the past six months, the MercyOne North Iowa president said that he's taken encouragement from the way that individual action is able to positively affect the curve of cases.

"We’d love to get out of our visitor restriction and, to do that, I encourage people to do all of the precautions that we talk about."

He also said that there have been difficulties for staff and patients alike, not everyday is a walk in the park, but that things are in a better place now. As far as he's concerned, there isn't a safer place in the county for staff as well as for any patients that come through. 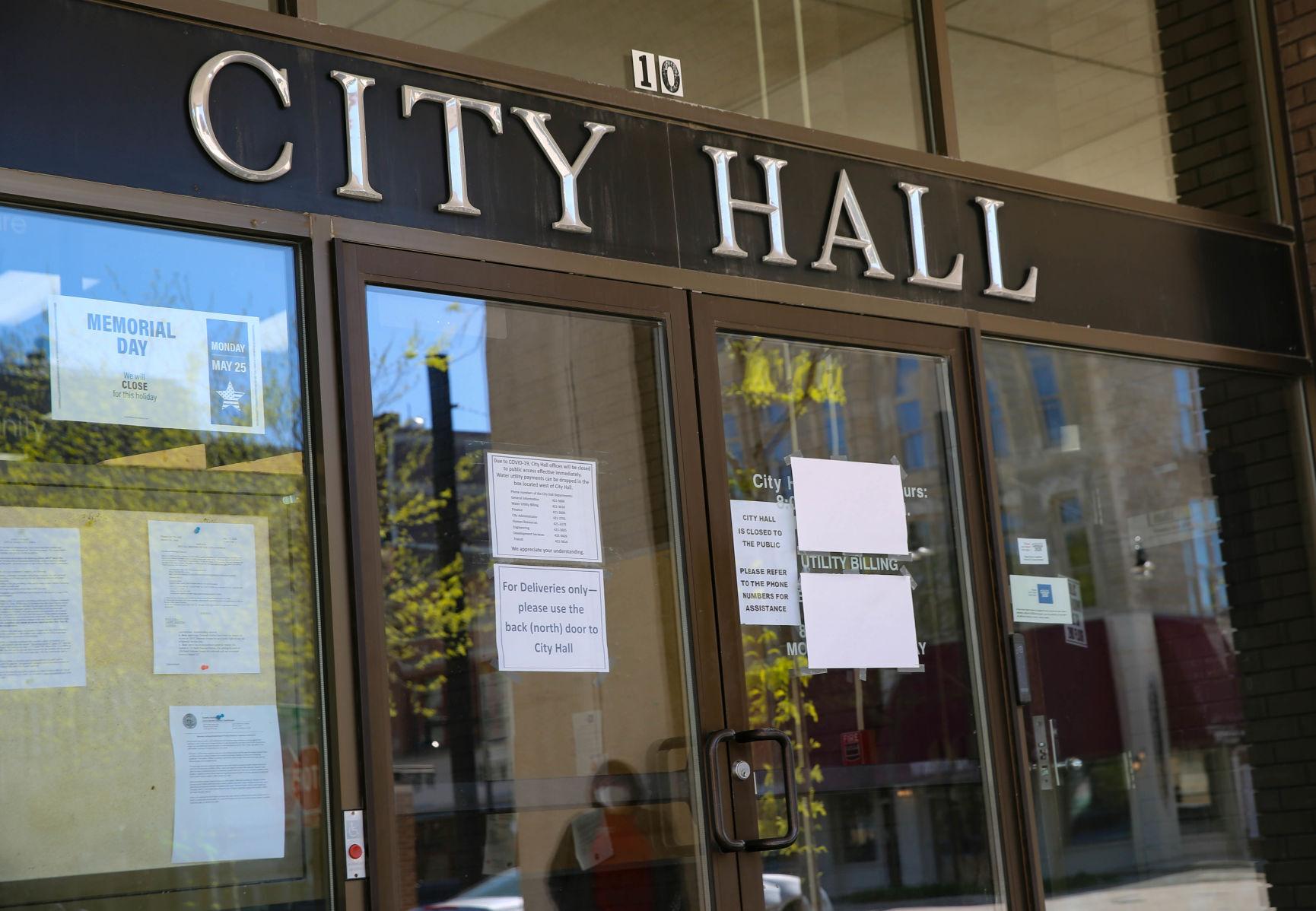 At its Tuesday night meeting, the Mason City Council approved an item that wasn't one of the costliest on the agenda but one that deals with an ongoing focus for local law enforcement officials: methamphetamine.

According to Mason City Police Chief Jeff Brinkley, the $3,000 is "passing-through money that will come through the NCINTF." Reimbursements are processed through those accounts and then given to participating agencies in the NCINTF which includes not just Cerro Gordo but also Butler, Floyd, Franklin, Hancock, Mitchell, Winnebago, Worth and Wright.

When that news broke, Brinkley put out a press release that said the arrest was "just part of this investigation." The release then went on to say that "Additional follow-up, lab testing, and investigation will be necessary as additional defendants were identified as a result of today’s activity."

Firearms and money were also seized.

A much more financially hefty item the council heard Tuesday night was an update on the ongoing Winnebago River Dam Mitigation project which intends to make the stretch through Mason City more navigable for outdoor enthusiasts and wildlife. As of now, one of the three dams on the stretch has had mitigation work completed.

Angela Kolz, who works with the consulting, engineering and surveying firm WHKS, informed the council that costs right now for completing the two dams that still need mitigation are around $603,500. However, the city won't have to cover all of that. Funding is a 50/50 split between the city and the state because both entities have an interest in mitigating the dams.

One dam down. Two to go.

According to her, the concept for Dam No. 1 is to add boulders and rocks that work as "recreation and habitat enhancement." The proposal also includes a boater channel with wave pools with rock arch rapids.

"We’re starting the permitting process now and that is going to go for several more months," Kolz said.

If permitting comes in quickly, construction could start before the year is up.

During the discussion surrounding the update on the project, Mason City Mayor Bill Schickel attempted to hammer home the intended impact the mitigation work would have on safety.

"(There's a) three-foot drop off on that dam and it's very hazardous," he said. "We’ve had four fatalities there and a number of near misses."