You have run out of free articles. You can support our newsroom by joining at our lowest rate!
Already a subscriber?
Log in or Activate your account.
Loading&hellp
No thanks, return to homepage.

Hundreds of people and motorcycles gather for the ABATE of Iowa Freedom Rally in Algona.

Thousands of motorcyclists gather each year for the annual ABATE of Iowa Freedom Rally in rural Algona. 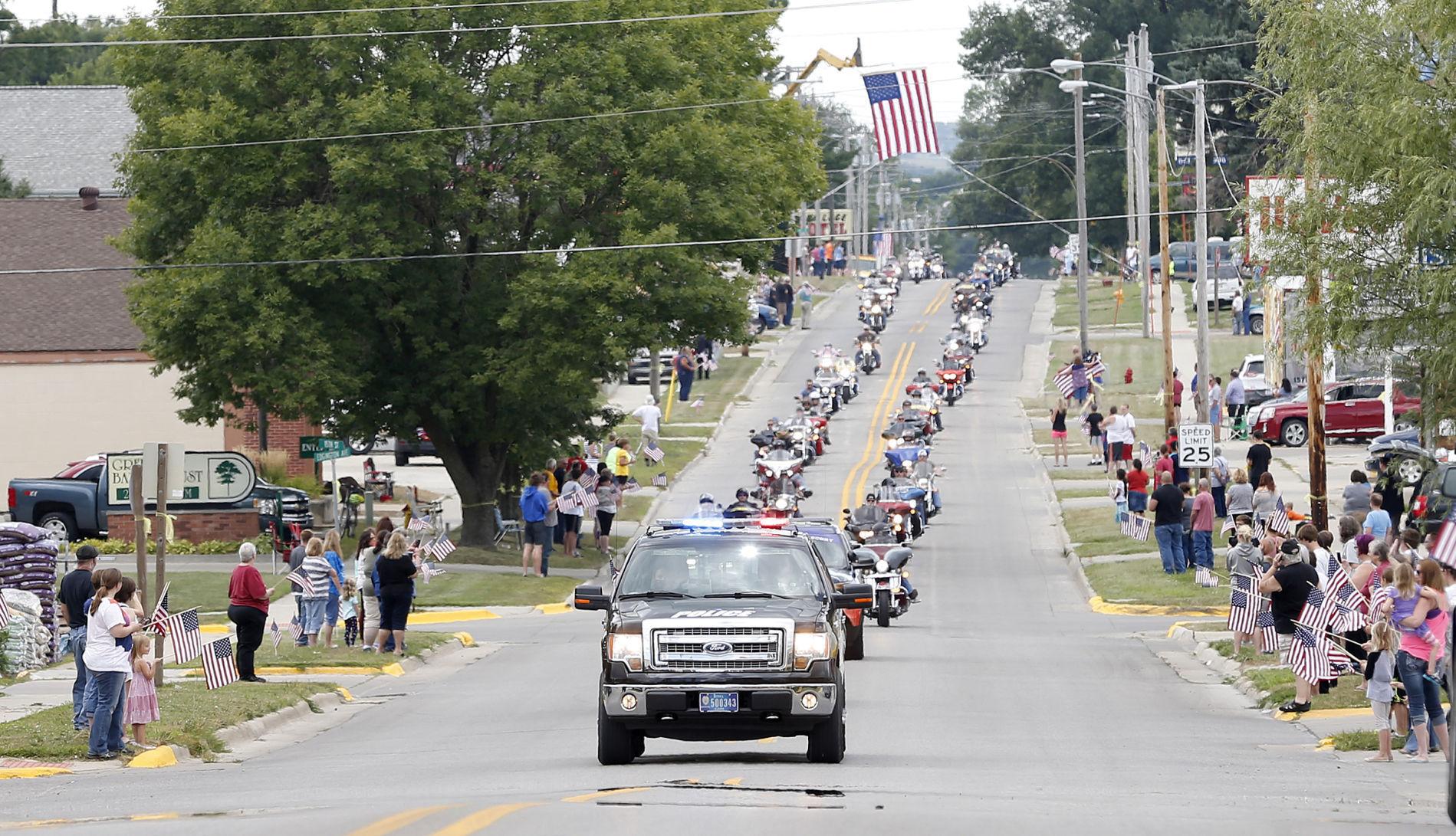 ALGONA — A group still plans to hold a three-day motorcycle rally in northern Iowa that's expected to attract thousands of bikers despite the concerns of local officials that the event could spread the coronavirus.

Local officials usually welcome the annual Freedom Rally held on a farm northeast of Algona, but this year's event planned for Thursday to Saturday has officials worried.

“We have a good relationship with them,” Algona Mayor Rick Murphy told the Des Moines Register. “The bikers are friendly. They’re fun to visit with. ... But this year, everyone is a little more on edge.”

Algona is in Kossuth County, which has had 32 confirmed cases of the coronavirus and no reported deaths, but officials think that could change because of the motorcycle rally, which typically draws 10,000 bikers.

The rally is organized by ABATE of Iowa as a fundraiser for the nonprofit group, which supports motorcycle safety and training. The annual rally was long held in Humboldt before moving in 2002 just north to Algona, a city of 5,400 about 50 miles (80 kilometers) west of Mason City.

David Duffy, the ABATE state coordinator, said the group is encouraging social distancing and is calling for riders to limit trips into Algona.

"We’re taking all the precautions necessary to make this safe,” Duffy said.

The group's website states that participants will have to sign a form that seeks to identify anyone who has been to a coronavirus hot spot and could exclude them from the event.

The website also notes Center for Disease Control and Prevention recommendations but adds, “social distancing is a suggestion by the CDC, not a law. This rally was created and called the Freedom Rally to promote freedom of choice. Attending is just that, freedom of choice.”

Large gatherings were banned earlier in the year but Gov. Kim Reynolds has allowed them to resume.

Murphy said he and other officials emailed the governor's office to suggest she reconsider allowing large gatherings but didn't hear back.

Asked about the message, Reynolds spokesman Pat Garrett said in a text message, “We are not aware of this request.”

David Penton, the Kossuth County Emergency Management coordinator, said local officials are especially worried that after keeping cases low for months, the rally could lead to the disease spreading at a time when cases are rising in other states, such as Florida.

“People are a little discouraged that that could all be thrown into the wind,” Penton said. “We don’t want to be another Florida.” 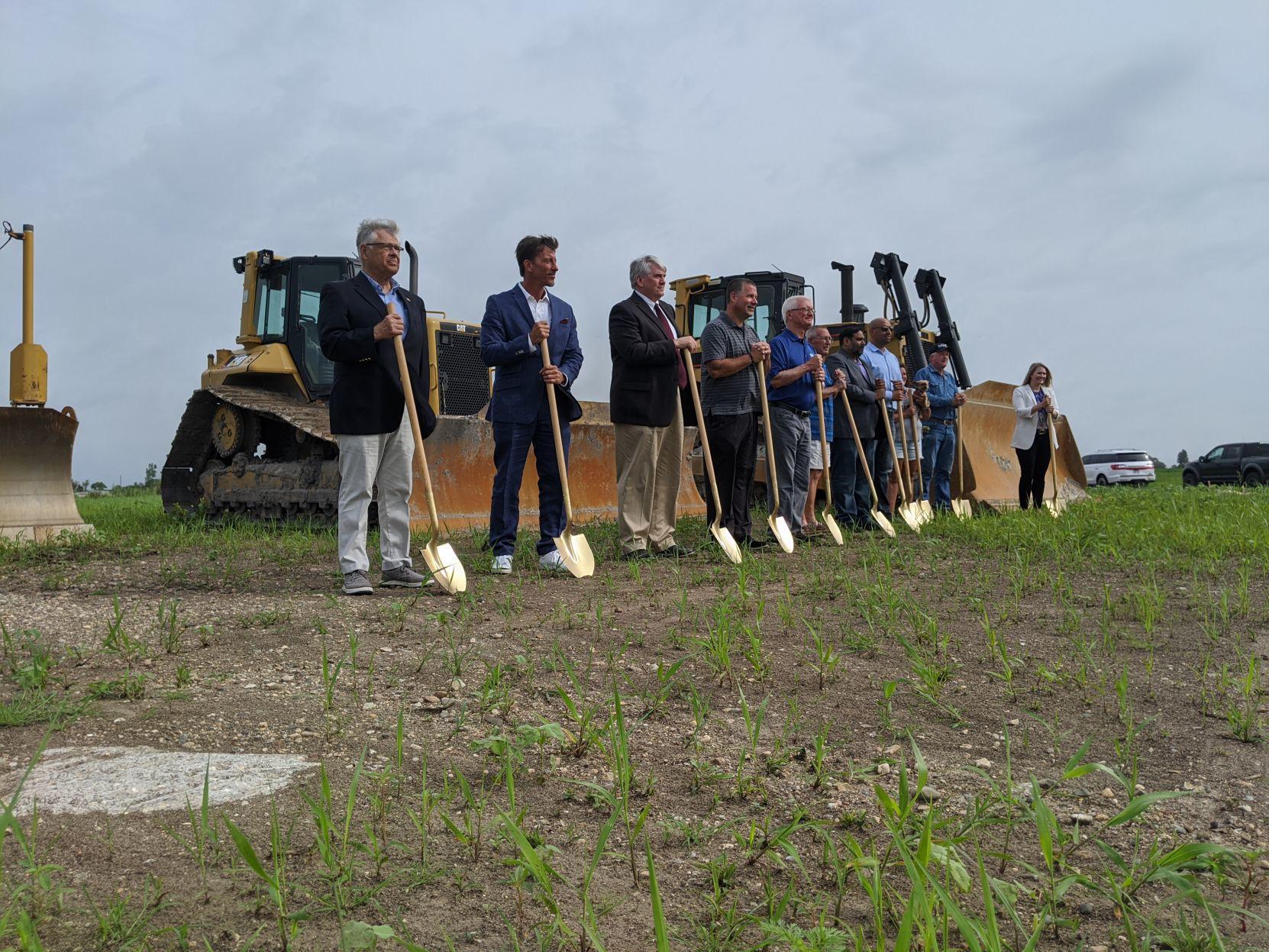 Smiles filled the faces of those involved in Clear Lake’s multimillion-dollar hotel and event center project Monday morning as 11 gold shovels dug into the dirt of its future site.

Nearly 20 individuals, including the general contractor, developer, landowners, Clear Lake staff and council and community members, attended a brief groundbreaking ceremony in Courtway Park east of Interstate 35 to celebrate the project’s start despite the economic instability caused by the COVID-19 pandemic.

“How special and important this day is to our city as well as North Iowa,” Clear Lake Mayor Nelson Crabb said opening the ceremony.

The ceremony was held two weeks after the Clear Lake City Council unanimously approved a development agreement with JSM Investment LLC, of Johnston, including the annual appropriation of tax-increment payments not to exceed $1.5 million. 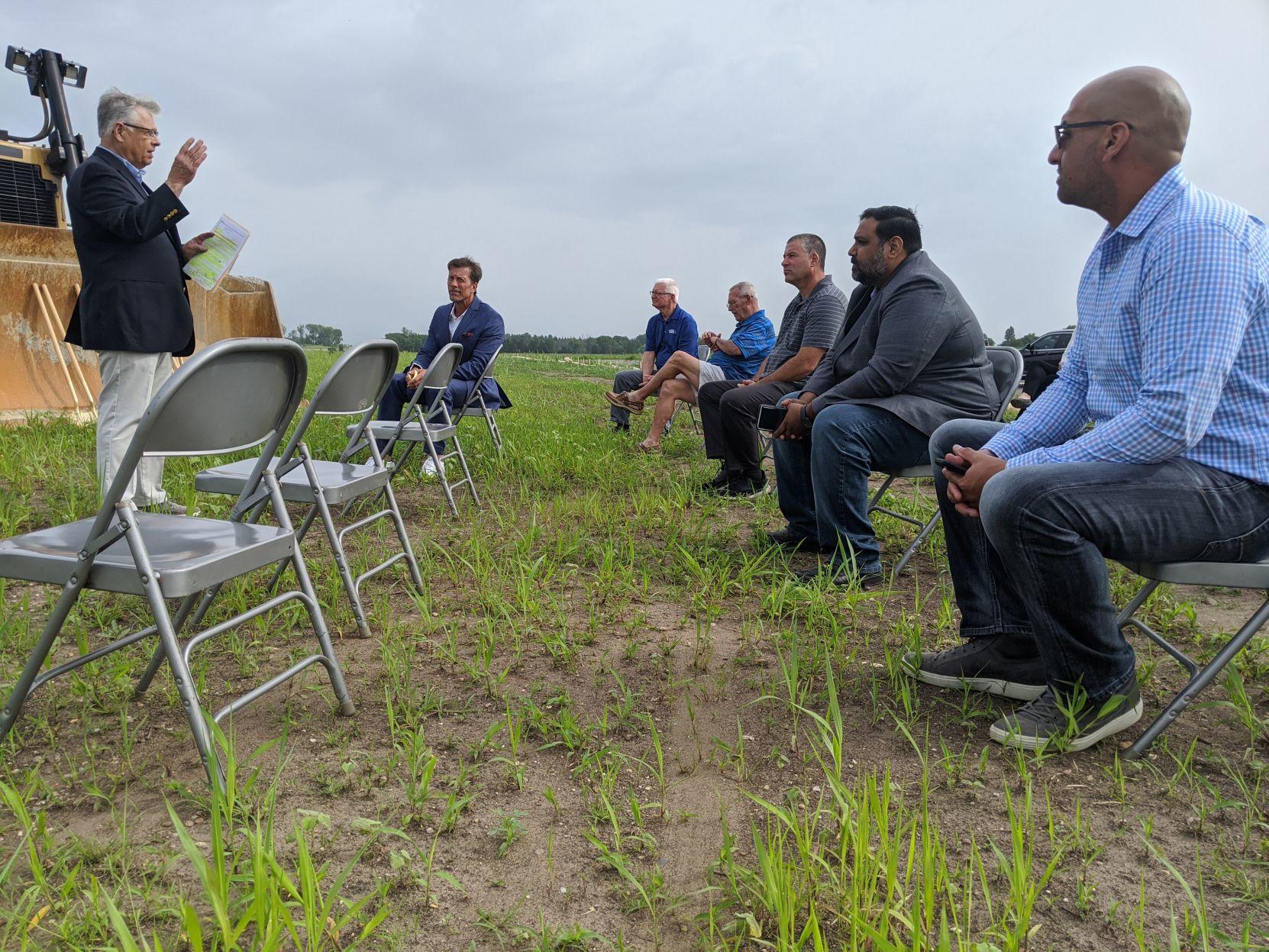 The building will be positioned on the southern four acres of Lot 4 in the Courtway Park subdivision with one entrance from Bayou Road.

The new hotel will be the city’s first in at least 20 years, Crabb said.

“We are excited about our partnership with the developer and the opportunity to bring Clear Lake a very modern and 21st-century hotel and meeting center,” he said, noting the hotel will be convenient for I-35 business travelers as well as leisure travelers. 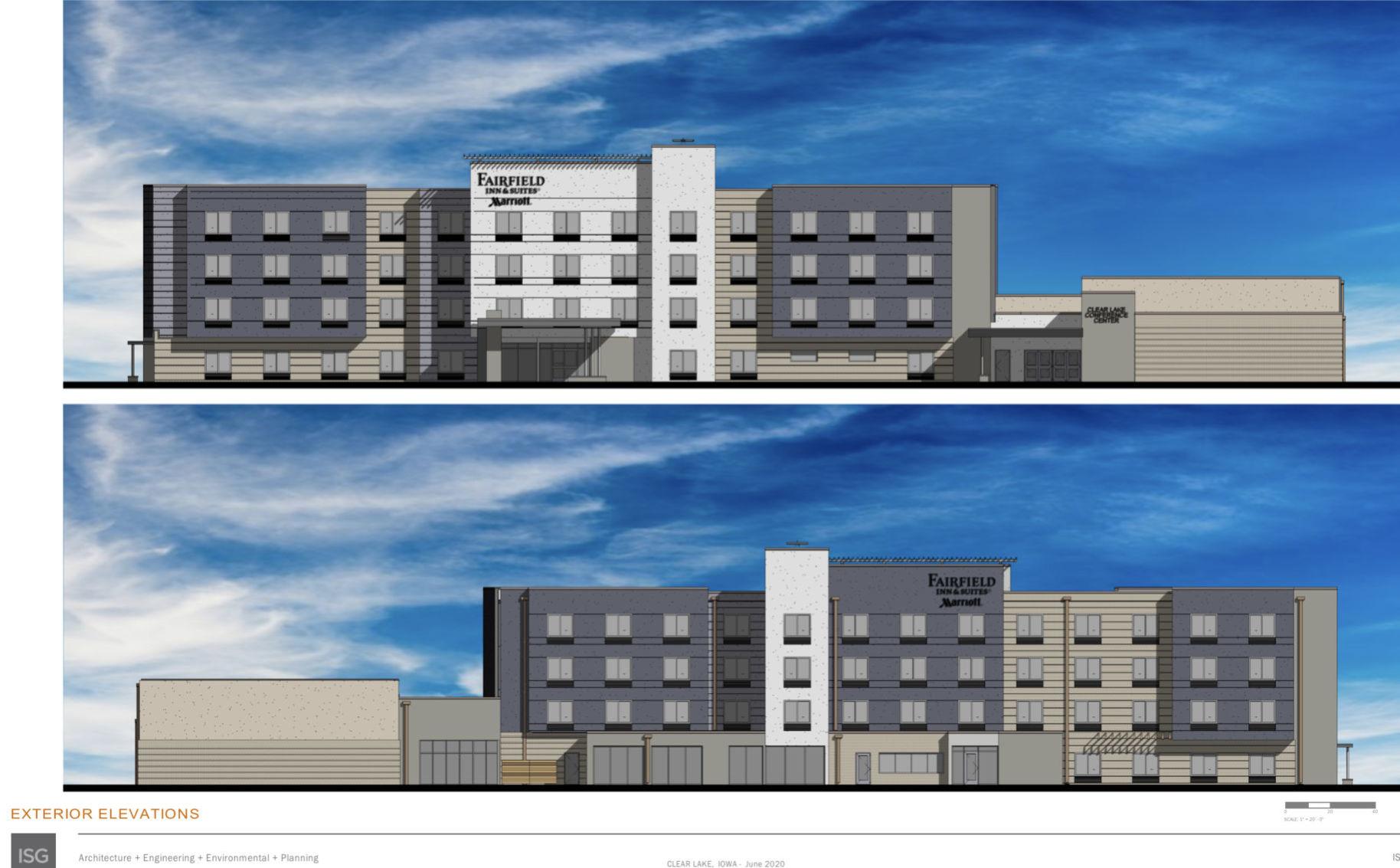 A rendering of the Fairfield Inn & Suites by Marriott hotel and event center that broke ground Monday. The project is scheduled to be completed by summer 2021.

Kalpesh Patel, CEO at VKB Management LLC, of West Des Moines, and Ryan Huegerick, CEO at HCI Hotel Supply, of Omaha, Nebraska, are the development team behind the hotel and event center project.

Both men attended the groundbreaking ceremony.

“This is going to be great,” Huegerick said. “We’re so excited.”

Patel and Huegerick described their companies as a packaged development team. HCI Hotel Supply, of Omaha, Nebraska, builds hotels and VKB Management, of West Des Moines, owns and operates them.

Clear Lake has agreed to pay the developer $150,000 if construction of the project, including at a minimum the excavation of utilities or footings, begins before June 30. Another $150,000 will be paid to the developer if the hotel is operational by June 30, 2021. 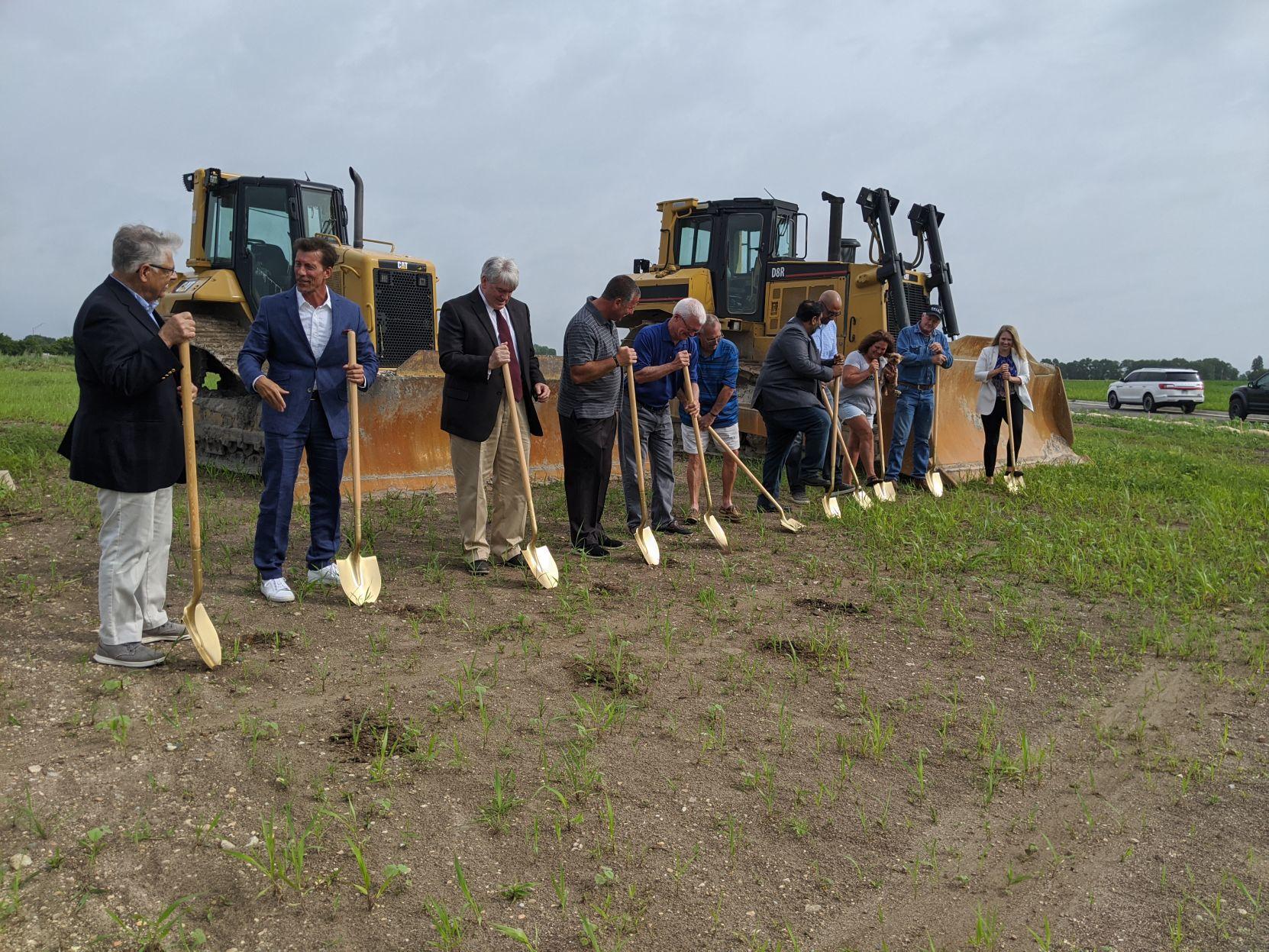 Charleson Excavating Company Inc., of Clear Lake, received the contract for excavation work at the site, which was scheduled to begin after the ceremony.

Erick Molestad, Charleson president, said it was his goal to get the “little dirt work” done by the end of the week, weather permitting.

“I don’t think any industry has been hit harder during this pandemic than the hospitality and lodging industry, so to be able to be here today and celebrate a groundbreaking on a new hotel that will represent a more than $13 million investment in our community is really, really awesome,” Flory said. 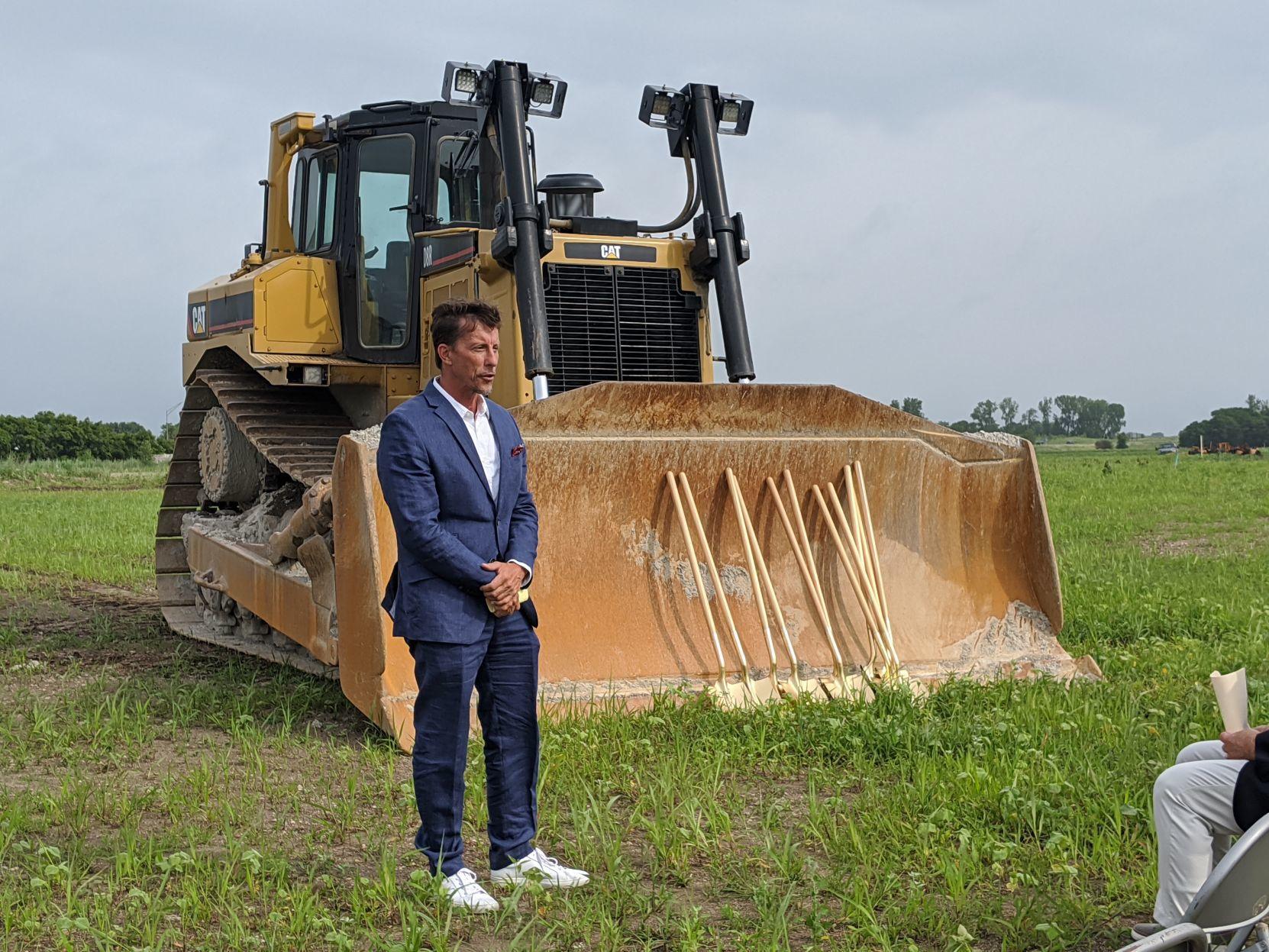 TDFUEL LLC, or Lorri and Todd Hall of Sheffield, own the land and were in attendance at the groundbreaking ceremony and received praise from Crabb and Flory for their investment in Clear Lake.

“We’re looking forward to it getting done,” Todd Hall said.

Crabb and Smith attributed the project’s launch to Flory’s leadership, the Halls’ investment and the developer’s confidence in Clear Lake.

“There have been many highs and many lows, but here we are today no longer a thought but a dream become a reality,” Crabb said to Flory. “I’d like to thank you for your time, your expertise and energy in bringing this to this point.”

The City Council approved a memorandum of understanding with JSM Investment LLC in April, which enabled Clear Lake and the developer to take the necessary steps to formally consider a development agreement.

The memorandum came about a month after the City Council approved a preliminary economic development incentive agreement with the developer in March.

Photos: Clear Lake Fourth of July Celebration over the years

News
Chloe Anderson is stepping on the gas for her hometown
Grace Zaplatynsky Summit-Tribune
06.30.20

While many seniors choose to go to college to pursue degrees such as nursing and art or to continue a career in a sport like football, one Forest City High School graduate has chosen to stay in her community instead.

Graduate Chloe Anderson from Fertile said she will be attending the North Iowa Area Community College to pursue an associate’s degree in business so she can own and properly run a gas station and convenience store in her hometown.

In Fertile, there used to be a gas station called Pronto a couple years ago that has since closed down and been sold and converted into a storage place.

“It was always a place I went to as a kid, just with my parents to go get gas, and it was always just right there,” Anderson said. I thought it was a great place, it was always so nice and my place to go to, and I’ve always just liked that memory I’ve had of it.” 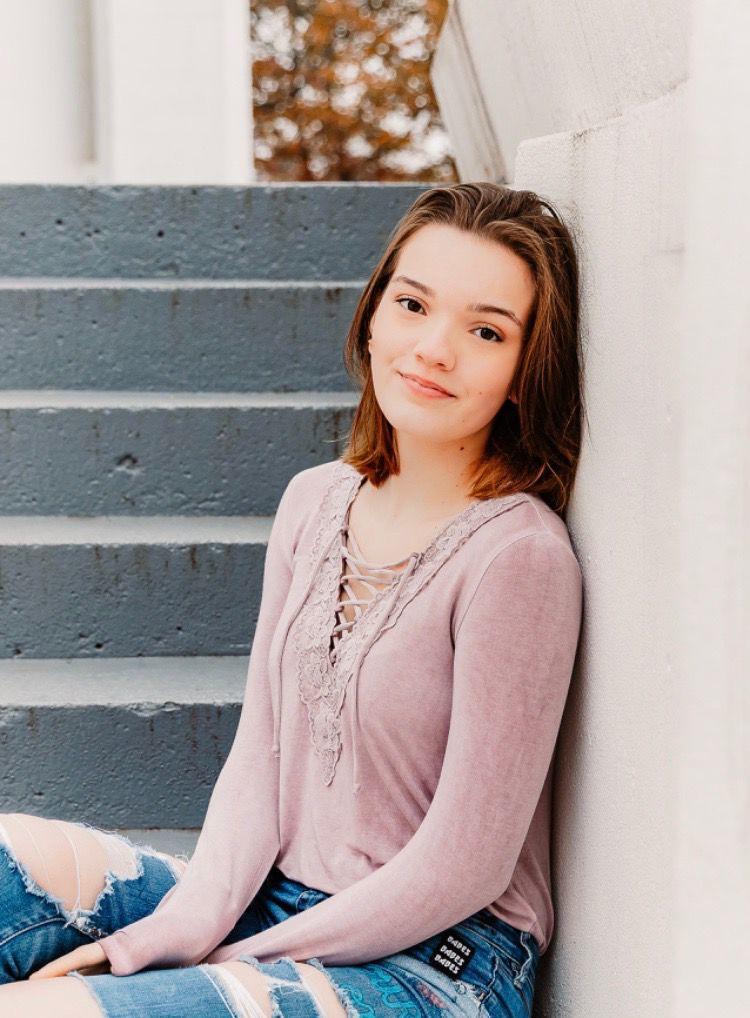 “I probably put two-and-two together somehow, and it’s been my idea for a pretty long time now,” she said.

While part of the decision was not wanting to be an employee, Anderson had another big part in her decision: she wanted her job to be more a part of her life than usual.

“I want to have a place where I could invite a part of my personal life into the gas station,” she said. “…I want to live on a farm, so the idea of having fresh cooking eggs there or some honey from a hive that I have – something like that, that I can bring into the store that’s mine and natural, like, it’s something personally from me. I think that’s what I was going for. I want to be more a part of the community.”

Anderson said she’s hoping to have her gas station and convenience store in Fertile, but there’s always a chance in which she won’t get that same building.

If she can’t get that gas station building, Anderson said there’s one in Crystal Lake she could try to get or build her own gas station, though that is the most expensive option for her.

She said she wants to stay in the North Iowa area because she has lived here her whole life and feels like she knows the people who live here and she likes the environment.

“That’s why I don’t want a gas station in the middle of a busy town,” she said. “It wouldn’t be the same to me. I feel like I wouldn’t be as part of the community as I want to. I want some place where I know I can help, I know I can do something for them, and I know that they can use my business as well.”

To achieve her goal, Anderson will be attending NIACC business classes for two years starting this fall and is currently working at a gas station and learning the business through her job.

“That’s taught me a lot already,” she said. “Right now, I’m just making definite plans, like, are you sure this is what you want to do in life? And it’s working so far, finding out the good parts, the bad parts of running a gas station and it’s working out great.”

After she graduates from college, Anderson said it’ll be a matter of getting enough money to put her feet on the ground to get everything she’ll need for the store, but she expects that to take a while and not happen right after she graduates.

“I think if I plan my money right and I’m smart then I can do it just like a lot of other people,” she said.

Her math and business teachers at the high school have always supported Anderson in her decision, as she has had the idea since she started high school and has always been talking about it, Anderson said.

“There was just a lot of support and questions that were answered for me that made me feel a lot more confident in basically my dream,” Anderson said.

Anderson said her parents have always been there to listen to her thoughts and ideas and give her ideas on some things she might not have thought about.

“They’re always there looking out for me, and they helped out a lot,” she said.