Skip to main content
You have permission to edit this page.
Edit
Return to homepage × 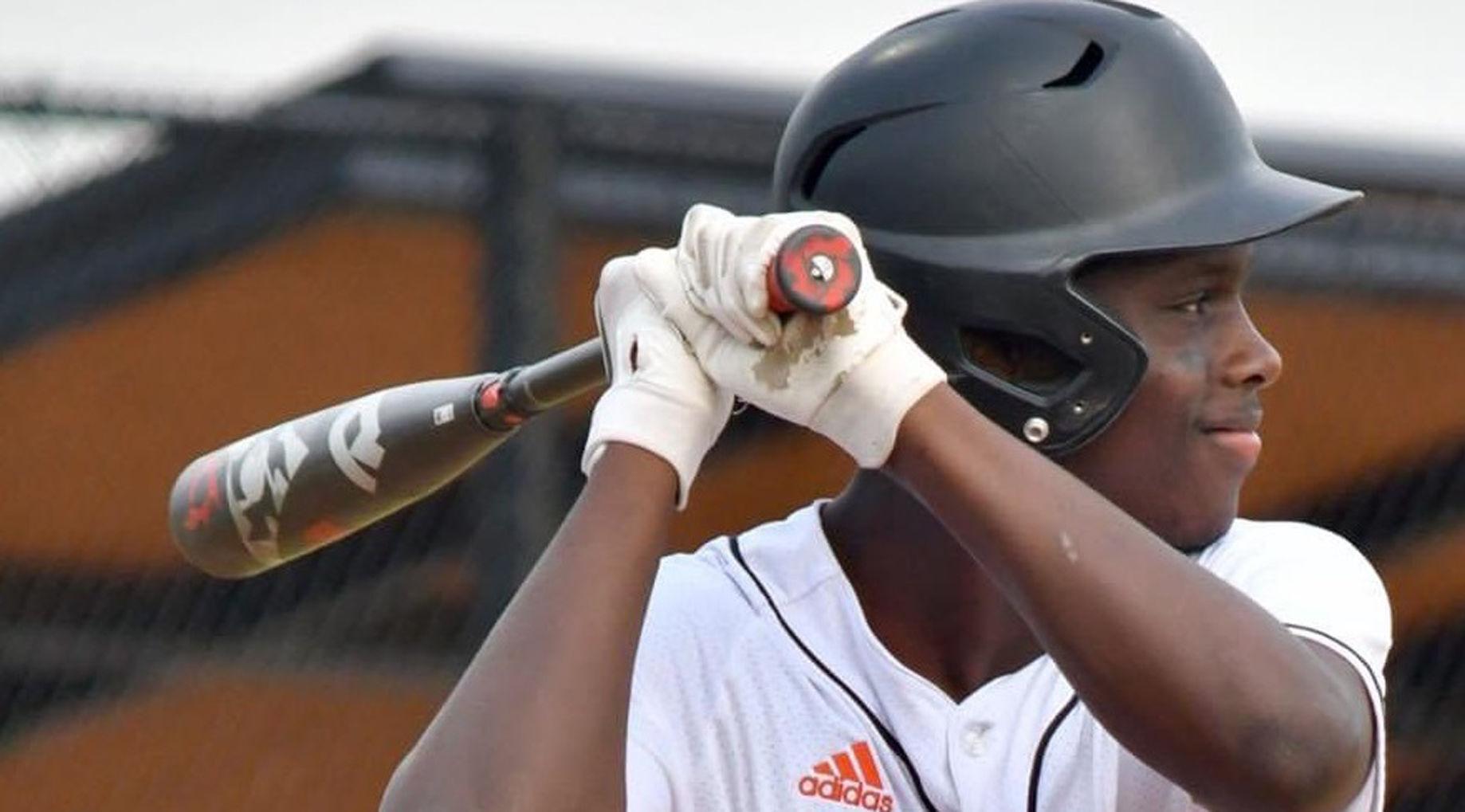 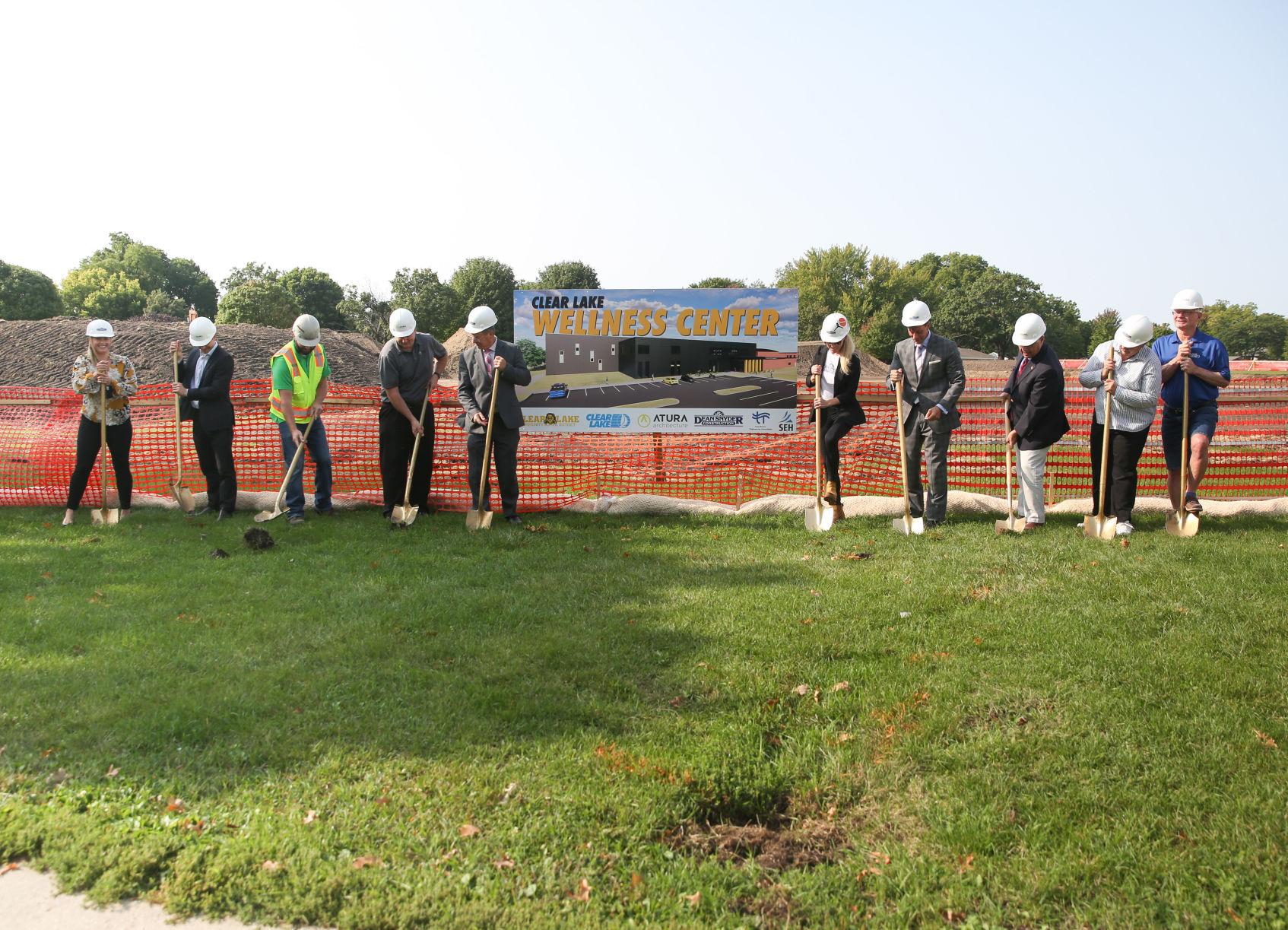 A ceremonial groundbreaking took place on Tuesday at the site of the Clear Lake Wellness Center, adjacent to the high school.

Applause filled the air Tuesday morning as the Clear Lake Community School District and the city of Clear Lake celebrated the culmination of months of discussions and actions to make a multimillion-dollar recreation and wellness center a reality.

The ceremony was postponed last week due to rain.

It was held more than six months after residents approved the district’s $18 million bond referendum during a special election in March and more than a year after city and school officials began exploring a partnership to build a recreation and wellness center last fall. 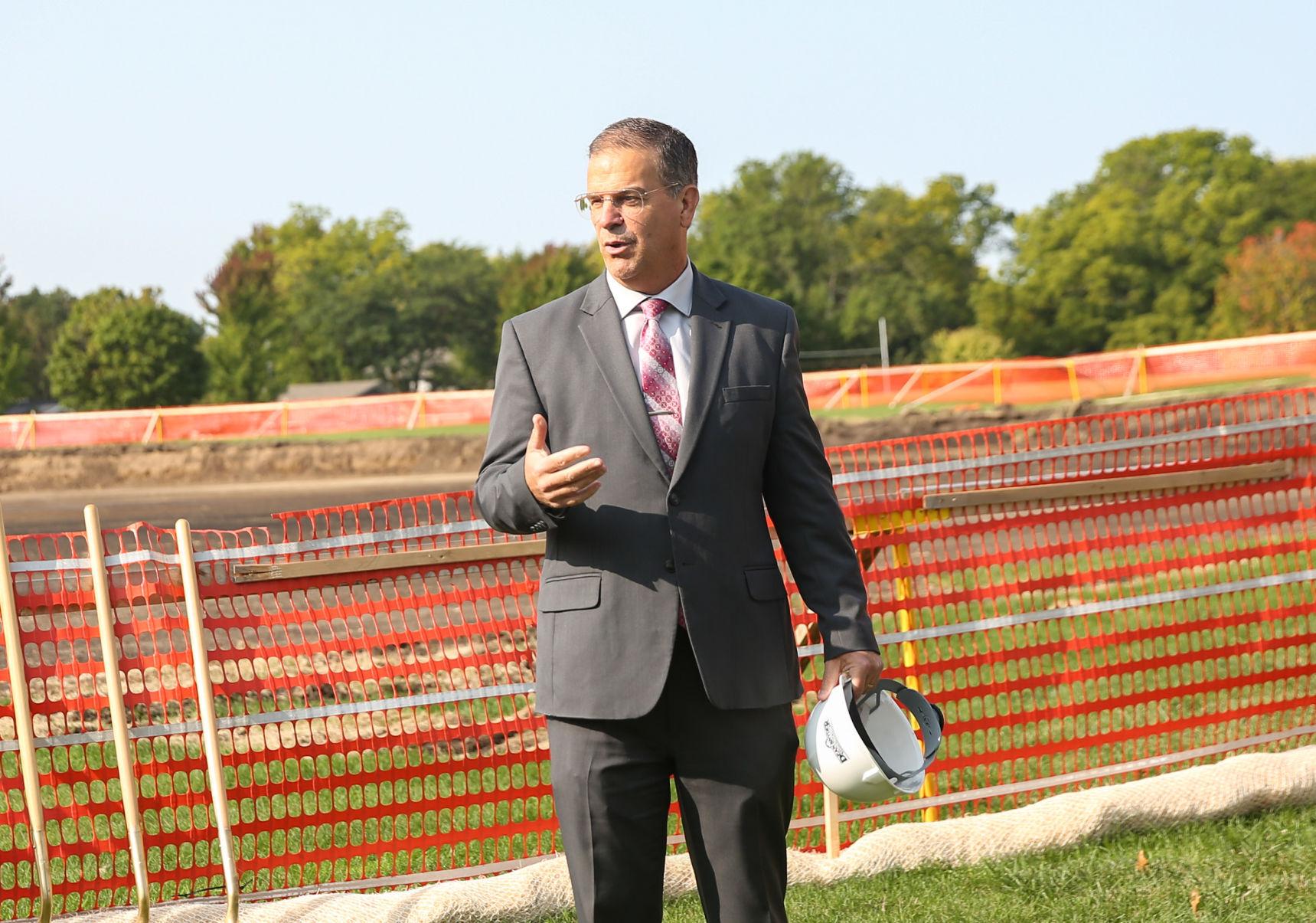 “You just don’t see that type of cooperation in a lot of cities, a lot of communities around,” Gee said. “This has been a joint effort.”

The 81,000-square-foot wellness center will feature men’s and women’s locker rooms with saunas, three multipurpose studios, an indoor playground, a wrestling room and a weight room as well as a 47,114-square-foot field house.

The field house will have a 200-meter indoor track with four lanes completely around it and six lanes in the sprint stretch. Inside the track, there will an indoor turf field marked for football and soccer, two hardwood courts and three multipurpose courts divided by retractable curtains.

“This is going to be huge for us,” Gee said. “I can tell you right now we sure could use this facility when we’re trying to social distance and we’re trying to find places for kids to practice or play games. You know we’re scrambling to find areas for that.”

He said the recreation and wellness center will be an asset in attracting more people and businesses to the community. 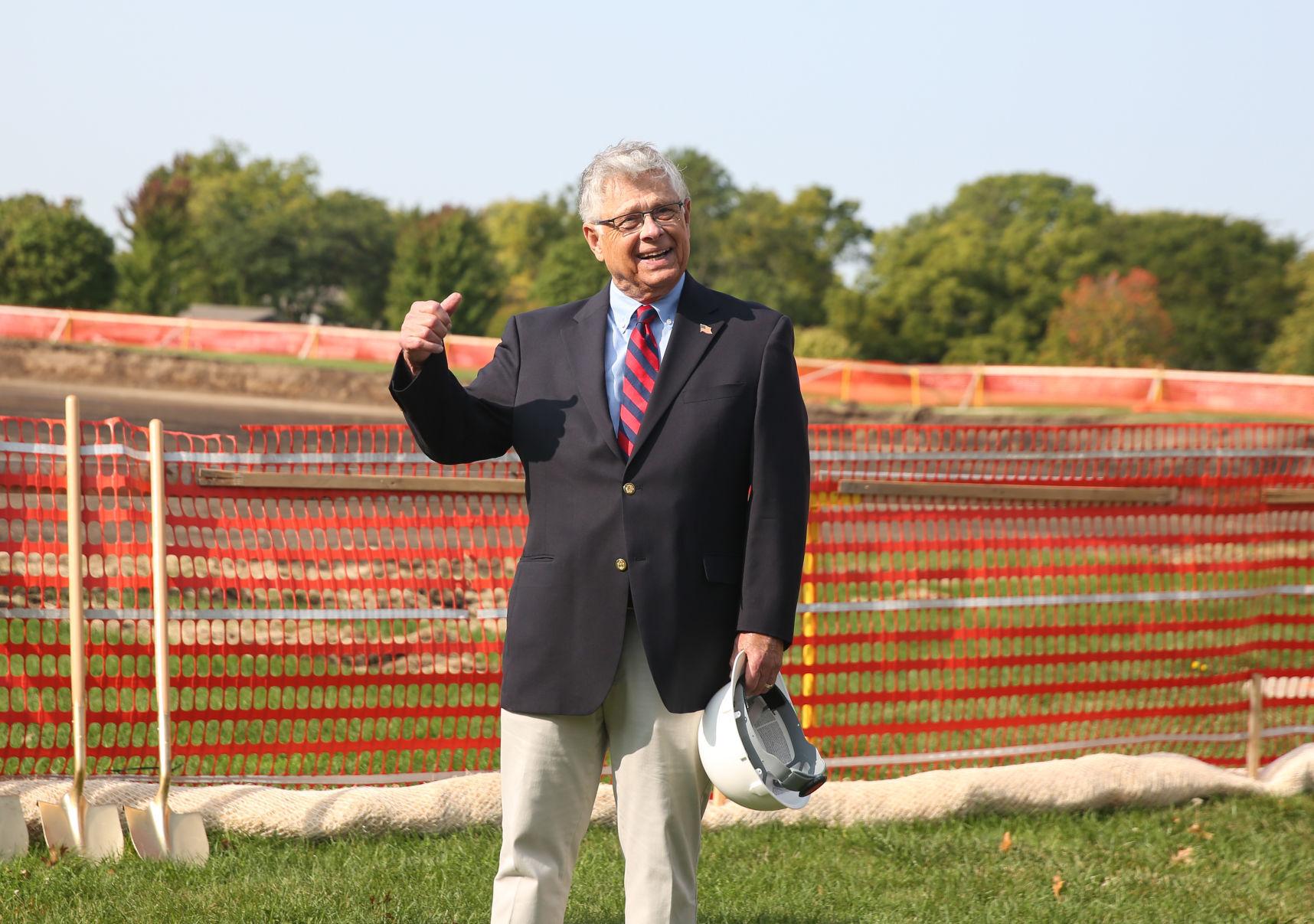 According to the 28E agreement the school board and city council approved, the district will own the recreation and wellness center, while the city will be responsible for the day-to-day operations.

The district will have priority use of all components of the building except for the elevated track, fitness and workout area and indoor playground area, which are components funded by the city.

In August, the Clear Lake Board of Education awarded the project, including six alternates, to Dean Snyder Construction for $10,624,140. 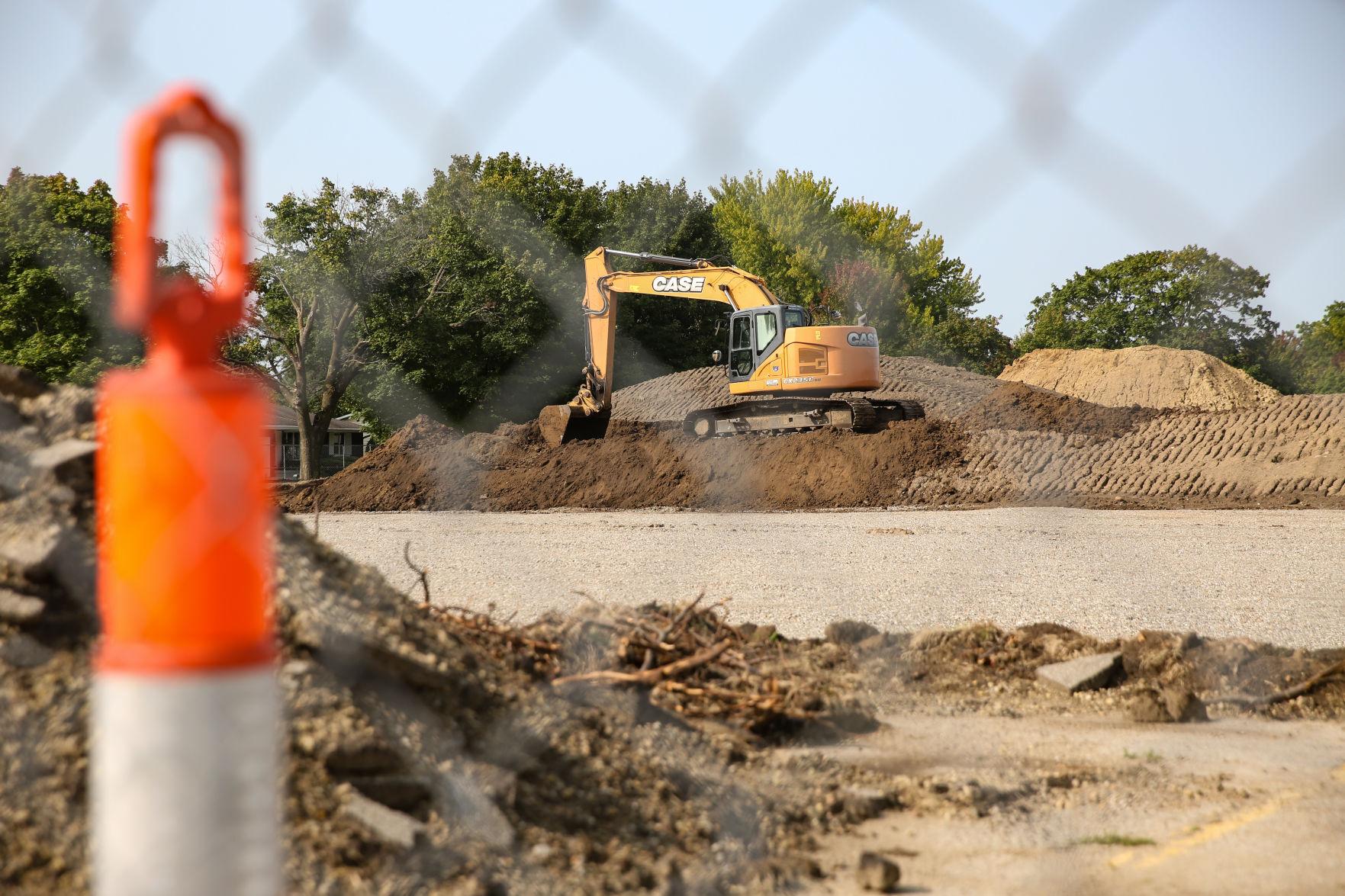 Excavation equipment can be seen at the build site of the Clear Lake Wellness Center, adjacent to the high school.

Construction on the wellness center began on Aug. 31.

Seth Meyer, project manager with Dean Snyder Construction, said last week’s rain didn’t allow the construction crew to get much dirt work done but it will “pack more into a shorter time” to keep the project on schedule.

He anticipates the facility’s footings will be placed within the next couple weeks, weather permitting.

“I just really want to thank the community and the people that were involved in this,” Gee said. “It’s just a huge, huge thing for our community.”

Despite the coronavirus pandemic, it’s been an eventful year for the Clear Lake Community School District and city of Clear Lake.

The district started — and nearly finished — its improvements at the Lions Field Athletic Complex and Clear Creek Elementary as well as built a new greenhouse and approved the purchase of new seating and lighting for the E.B. Stillman Auditorium.

The city celebrated the groundbreaking of its Marriott hotel and conference center project with JSM Investment LLC in Courtway Park east of Interstate 35 in June and the completion of its $1.4 million City Beach enhancement project, including a new splash pad, in July. 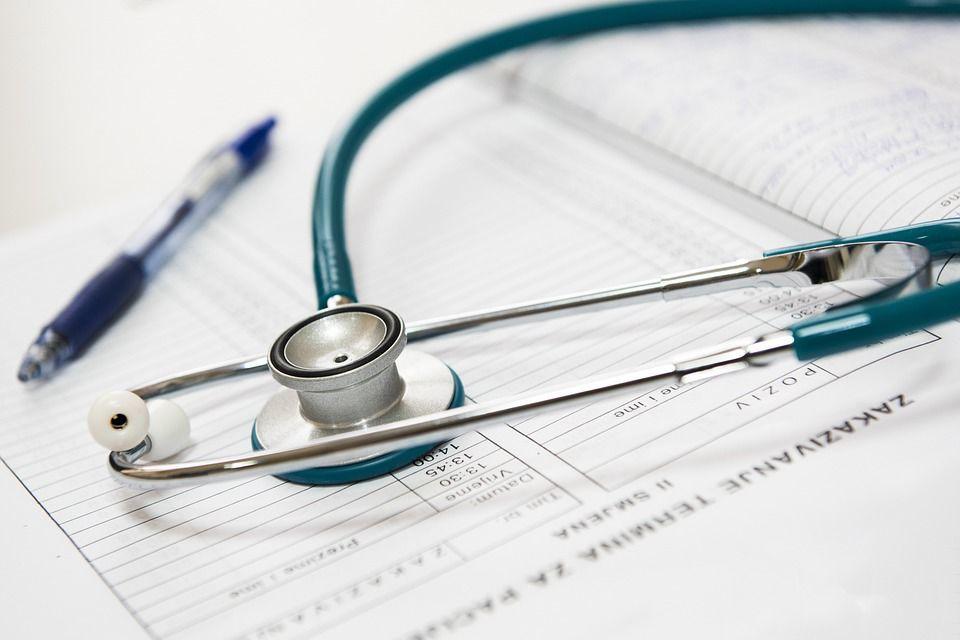 State officials projected up to 53,789 state employees and their eligible dependents will enroll between Sept. 28 and Oct. 30 in either the Iowa-based or national provider networks being offered for a projected claims total of $353.2 million in 2021 — up 2.2 percent from this year’s $345.6 million estimate. No breakdown of the split between the state and employees shares was provided.

Iowa Republicans hailed his return as they fight to re-elect President Donald Trump and U.S. Sen. Joni Ernst, but Democrats called Terry Branstad’s surprise decision to step down as U.S. ambassador to China in time to hit the fall campaign trail a sign of GOP desperation.

Single-member premium costs would be $130, or about 15 percent of the $845 monthly premium cost under the National Choice PPO, The family share would stay at 17 percent, with a contract holder paying $342 or the $1,966 monthly premium, according to Department of Administrative Services documents.

Paul Trombino III of Gov. Kim Reynolds’ office, and DAS official Jessica Lingo told the three Executive Council members present for the meeting that the co-payments and deductibles remained relatively unchanged and the employee shares were comparable and competitive with other public-sector health insurance rate plans.

“This will keep us competitive while at the same time having a fair representation between the employer and employee share,” said Lingo, who noted the state saw an $11.7 million boost in the number of large claims topping $100,000 this year.

The plan also called for a slight increase in dental rates but no change for life insurance and a 2 percent administrative fee.

During the board discussion, Fitzgerald said raising the rates and boosting employees’ share of the overall cost — even slightly — would shift more burden to employees while saving the state money at a time when state government is offering incentives, grants and bailouts to businesses, farmers and other also hard hit by the coronavirus pandemic since it arrived in Iowa last March. 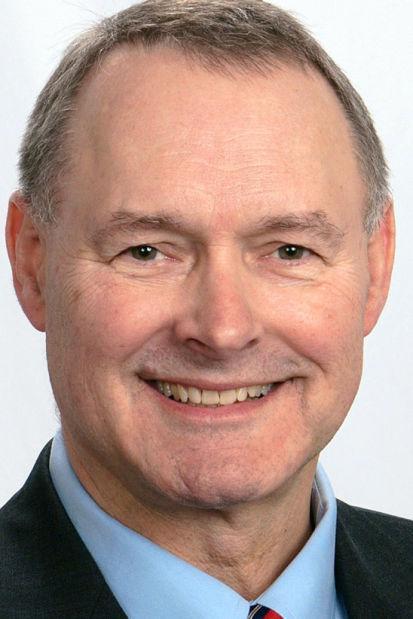 “It seems to me that it would be best I think in this horrible year that we’re going through to keep our rates the same as we did last year,” Fitzgerald said. “I just think this is the wrong year to increase these rates on the employees.”

Trombino said the plan added a fourth-tier level of prescription coverage that could add a $75 copay for some plan members but would be an incentive to help contain overall costs and provide savings in an area that increased by $5.6 million this year. He said the overall rate structure attempted to balance costs in a way that was consistent with the past.

But Fitzgerald noted that employee costs were significantly lower until Statehouse Republicans revamped Iowa’s collective bargaining law in 2017 and took away health insurance as a mandatory negotiating issue for most unionized state workers. 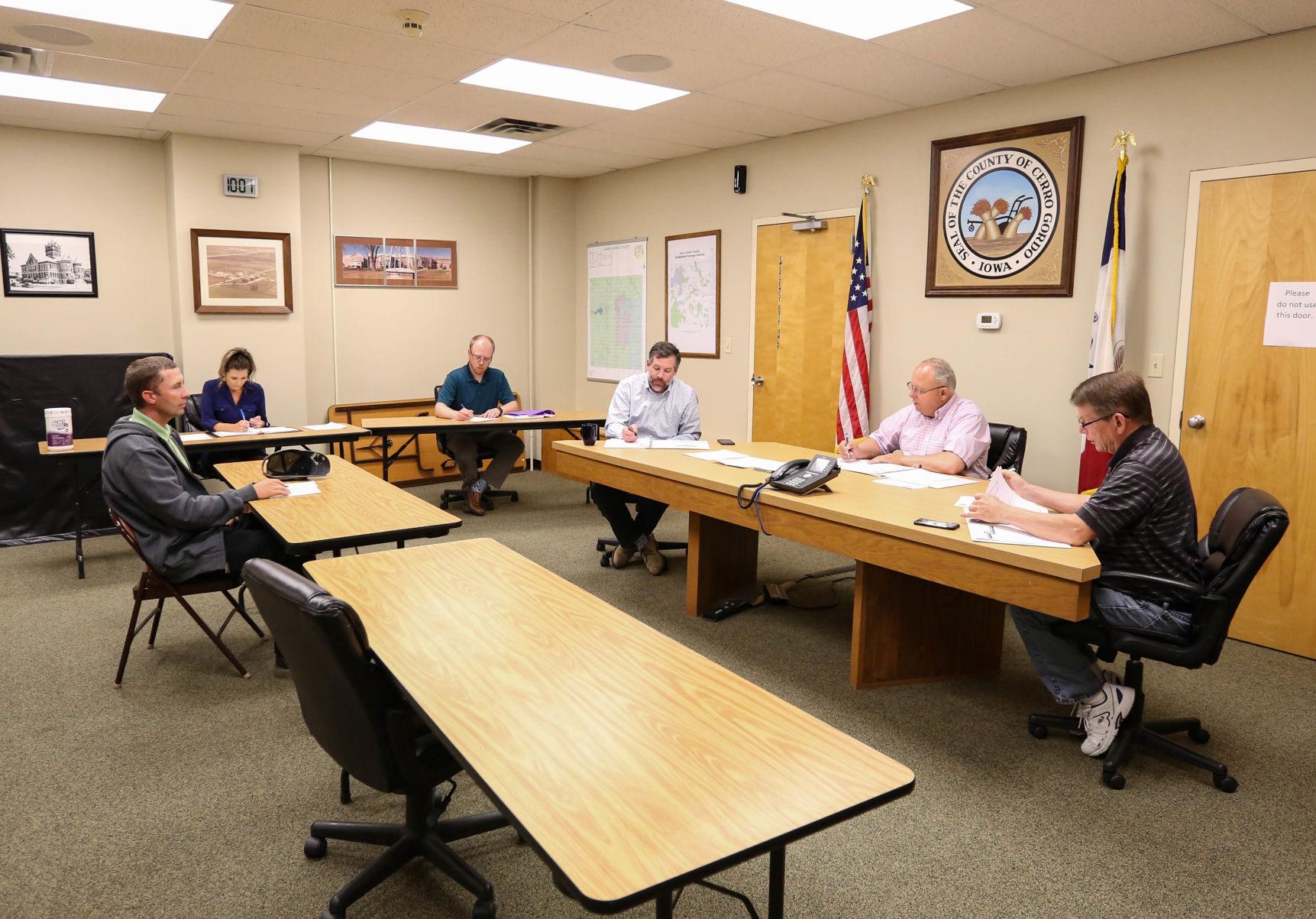 The Cerro Gordo County Board of Supervisors convene for a meeting on June 23.

Tuesday morning marked a busy day for the Cerro Gordo County Board of Supervisors.

Along with the usual reports from the county auditor and county engineer, the board made decisions on three separate items that could impact the county for a long time to come.

First, there was a continuation of a board meeting from Monday where the three supervisors made clear their intent to apply for membership in the CICS mental health region and withdraw from Cerro Gordo County's current mental health region, County Social Services. At Tuesday's meeting, the board approved the motion to formally request joining CICS.

Once CICS receives the application, it would decide at its next meeting whether or not it wants to accept Cerro Gordo into the 11-county mental health region. If CICS did approve, Cerro Gordo would join the region on July 1, 2021 when the new fiscal year starts. That gap in time exists to allow members in both CSS and CICS to adjust their budgets accordingly.

"Nobody wants anybody to pull out and leave the region hanging," District 3 Supervisor Chris Watts said. "By doing this, it’ll be a good move to keep everybody happy."

The end result could be an expansion by North Iowa Cooperative, east of Thornton, that would add jobs and expand the tax base.

Along with the possible mental health region switch, the county board also moved forward on a proposed expansion east of Thornton for North Iowa Cooperative that would allow the business to upgrade its large-scale grain bins and its shipping operations.

For this work, the county had already entered into an agreement with the North Iowa Area Council of Governments (NIACOG) which allows the governmental body to provide the needed services for preparing a new urban revitalization plan that would make an economic expansion possible. As Cerro Gordo County Planning and Zoning Administrator John Robbins explained at a previous meeting: the urban revitalization area is an economic development tool in Iowa Code that allows for partial tax abatements on improvements to land.

According to Robbins, the co-op has been in talks with the county about an economically feasible project that would create a future tax base and support several new jobs. The way that the county is moving forward would allow for that.

However, all planning for that project isn't finished yet. There are still utility matters to consider along with a second plan that needs to be adopted in October.

The official announcement of a new facility in Mason City comes at a time when there's already major, multi-million dollar developments in town.

The third major item that the county board considered was a potential reclassification of an entire county drainage district that includes the $35 million Bushel Boy facility.

Kent Rode, a senior project manager for the civil engineering firm Bolton and Menk, said that the recommendation for full reclassification is primarily due to changes in land use by the Bushel Boy property.

"There’s a lot of overland (water) flow that didn’t occur prior to this development," Rode said. Preliminary reclassification for the district would total about $15,000 while improvements on drainage tiles, which remove excess water from the soil below their surface, could cost at least $400,000 in part because most are more than 100 years old.

"My concern is how expensive the project is," District 2 Supervisor Casey Callanan said. District 1 Supervisor Tim Latham also expressed concern that "There are going to be a lot of questions here."

But all three members did acknowledge that if the city and county do plan on seeing further growth in the district they need to "get it right the first time" as Latham said.

Even if the county fully supported reclassification, Rode made sure to tell the board that if the majority of land owners reject the improvements, they can stop the improvement.

"They have to have the vote by number as well as by area," he said. "If that is received, all further proceedings would stop."