Although there wasn’t a Color the Wind kite festival in Clear Lake this year, colorful kites filled the sky Saturday.

The unofficial display attracted hundreds of spectators to the Sea Wall to enjoy kites of all shapes and sizes flying over the lake from their vehicles and from the ice. 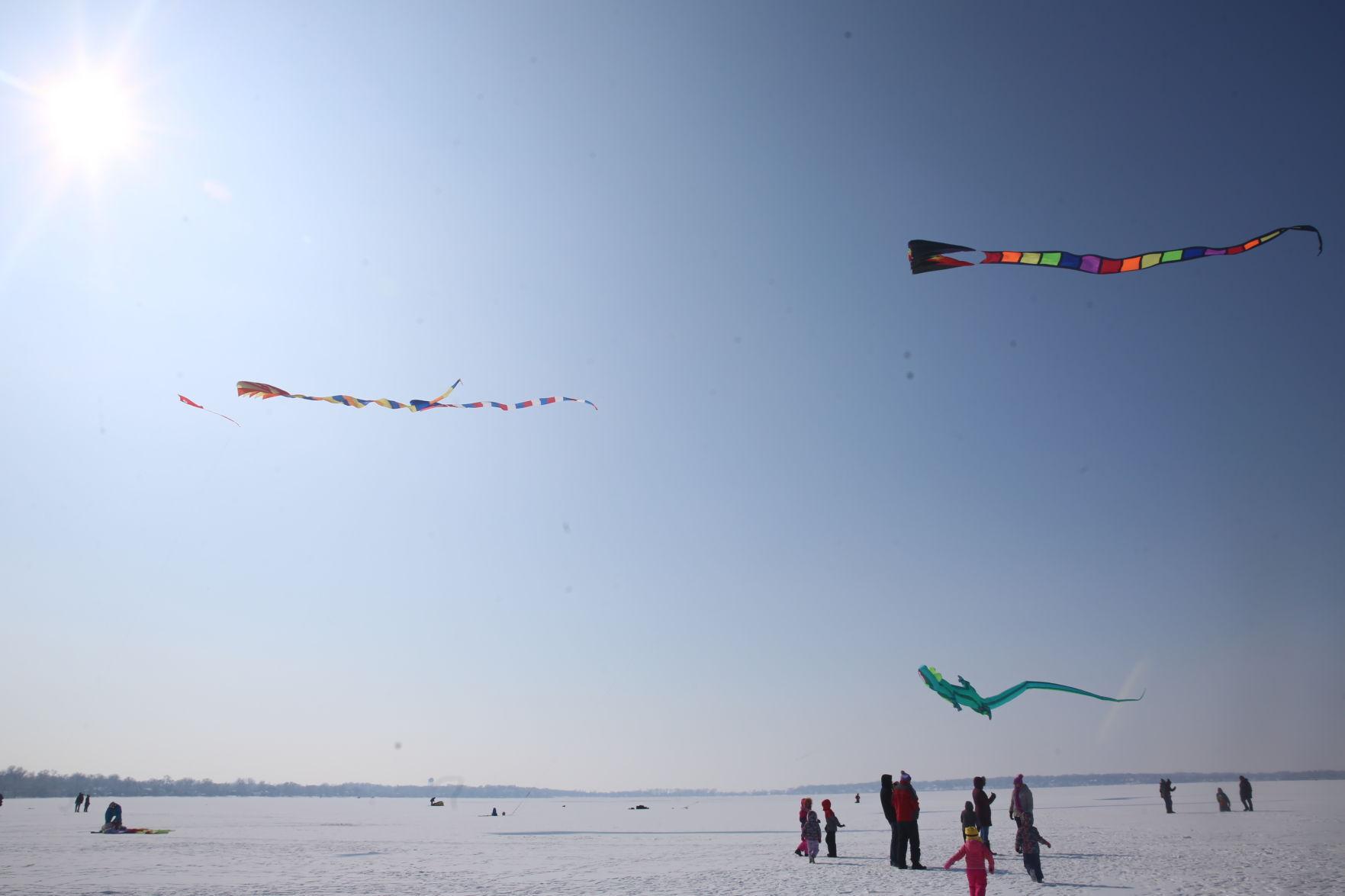 Dozens of spectators visited Clear Lake Saturday to view kites of all shapes and sizes as they filled the sky.

The Clear Lake Area Chamber of Commerce announced in November that it’d take over the kite festival in February 2022 with guidance from longtime organizers Larry and Kay Day.

The Days announced that 2020 would be their final year organizing the Color the Wind kite festival.

After the Days’ announcement, the chamber expressed interest in learning the ins and outs of continuing Color the Wind, but the global pandemic prevented the transfer of information in a timeframe that would make a 2021 event possible. 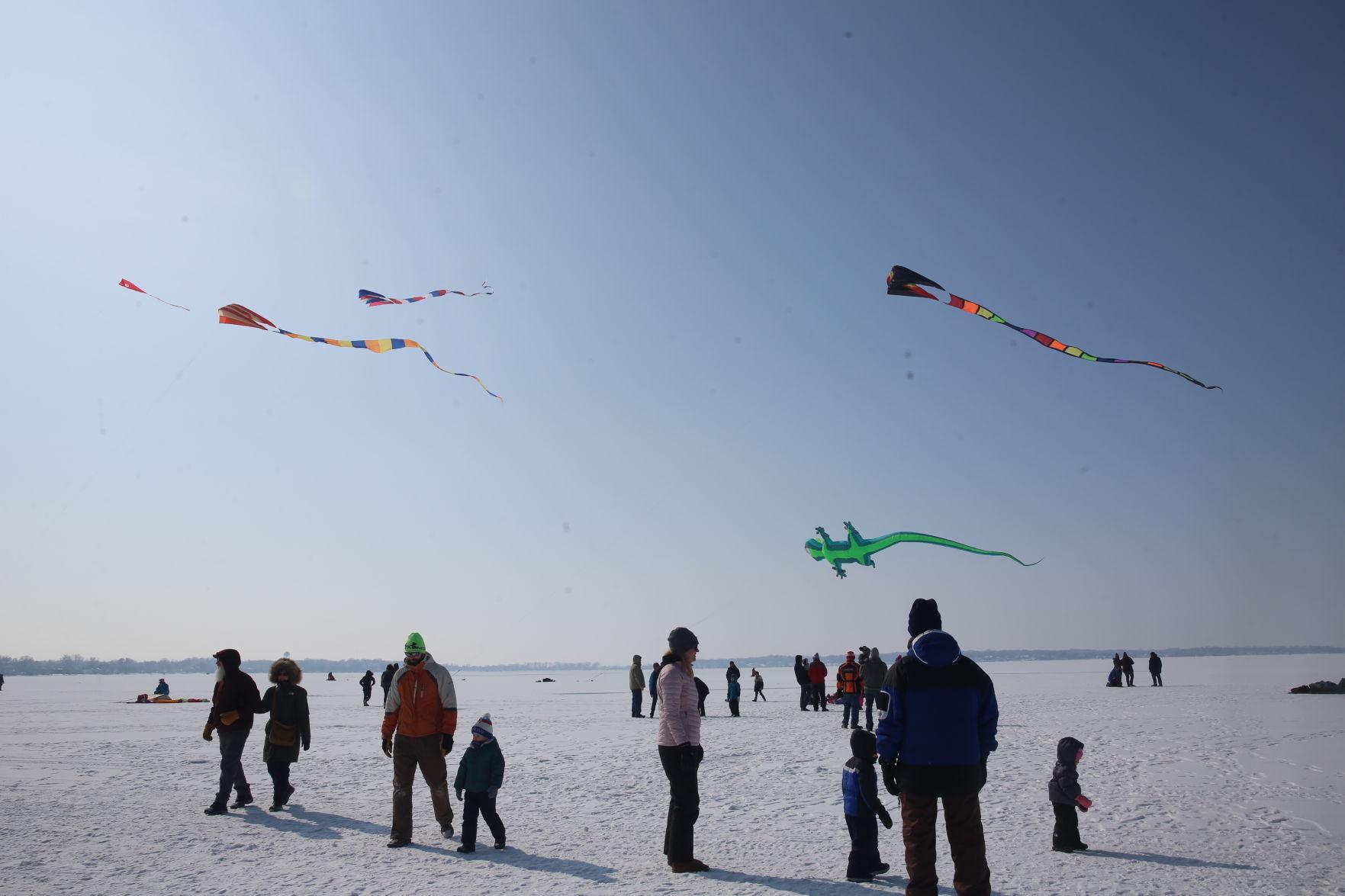 The next Color the Wind kite festival is tentatively scheduled for Feb. 19, 2022. 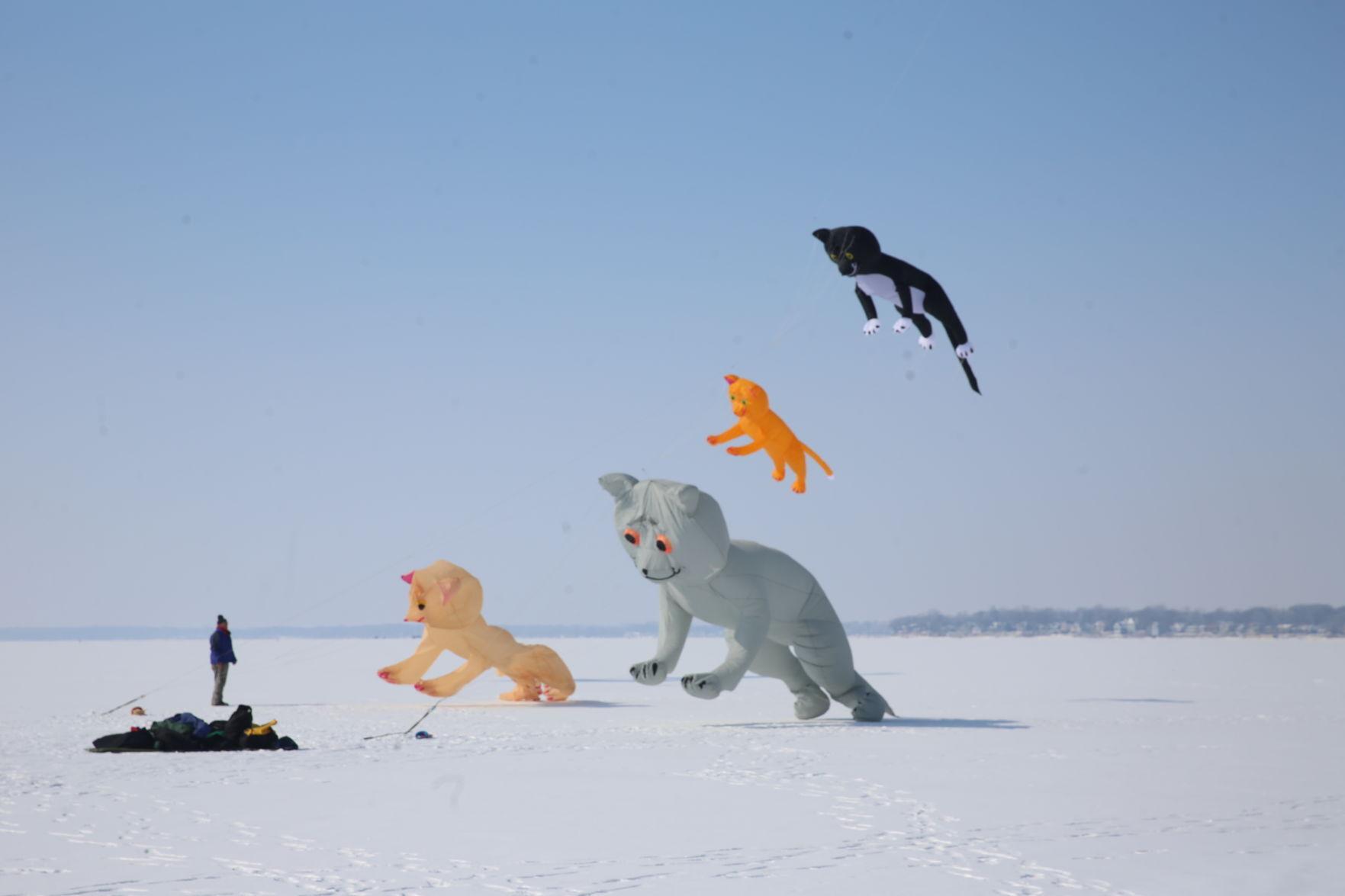 Kites of all shapes and sizes filled the sky over Clear Lake Saturday morning.

For more information about the chamber’s upcoming events, visit the Clear Lake Area Chamber of Commerce Facebook page or its website at www.clearlakeiowa.com.

On April 4, 2020, the Mason City Multipurpose Arena would hold its first concert since the venue opened months prior in December. Two cover acts were slated to tackle about six decades worth of tunes from the rock 'n' roll canon. Tickets for the gig were set at $25 and went on sale Jan. 15. For the night of, doors would open at 6 p.m. 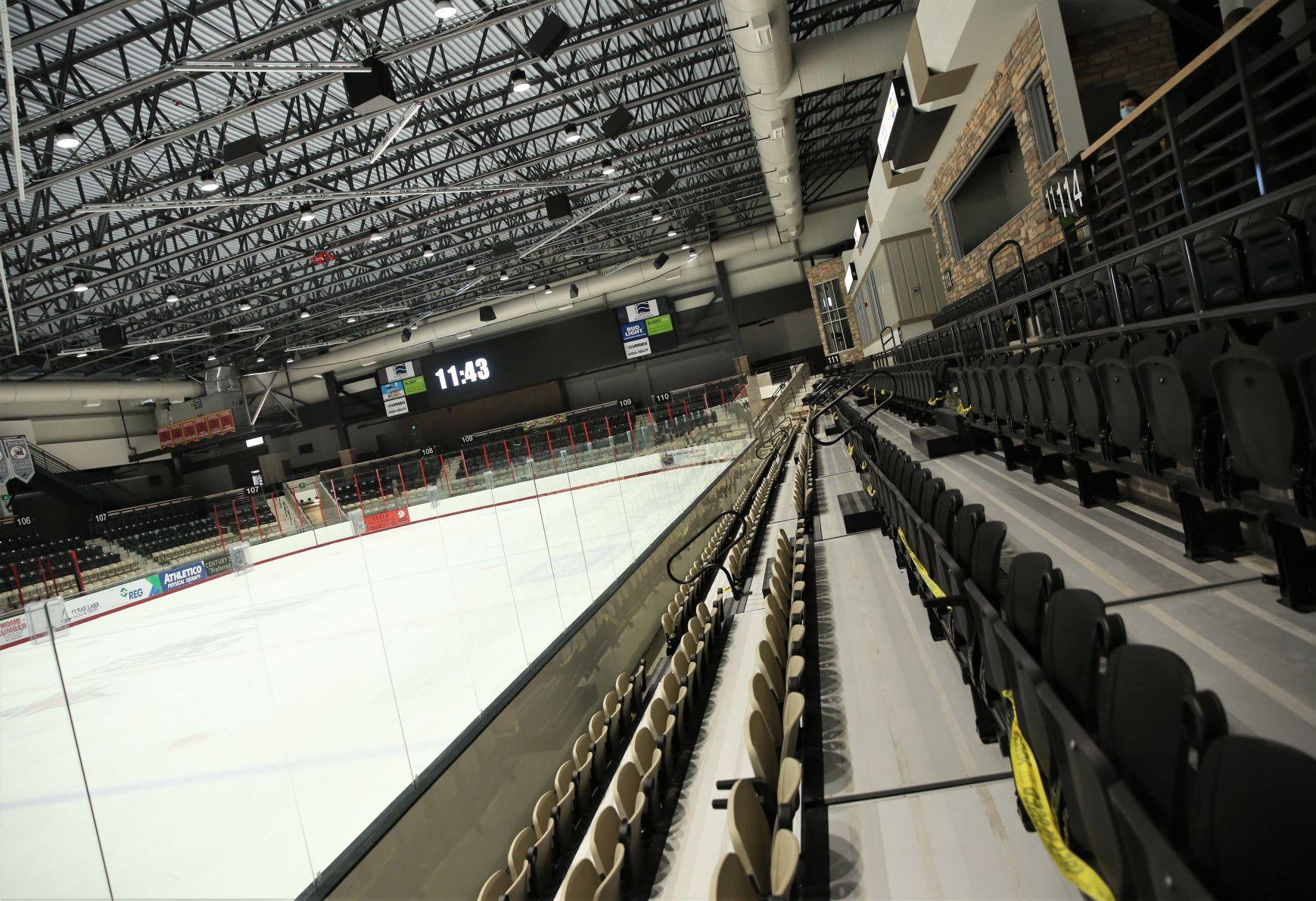 None of that happened as planned.

The COVID-19 pandemic made its presence known in early March and on March 12 concert organizers had to put the kibosh on the event.

"I’ll never forget that," said Clear Lake resident Michael O'Brien who runs the concert-promoting group Bands by O'Brien that helped put together the scrapped event. "We got close," O'Brien said.

Almost exactly a year later, it's time for take two.

According to O'Brien, the plan is for the rescheduled concert with the long-running "The Trip" and the more-recently established "The Hype" to play in the Multipurpose Arena on Saturday, April 17, with ticket prices set at $25.

"We will be a mask-mandated event with limited capacity," O'Brien said. "I’m pretty confident, unless something unforeseen happens, that by summer we should be getting a lot closer to normality."

He said that in the 40 years that he's worked in event promotion and consulting nothing comes close to what the past year has done to live entertainment in the region and across the country. O'Brien then pointed out that The Trip, which plays rock songs from the 1960s through today, maybe had two shows in the past year and that was it.

"It has been devastating to the entertainment industry," O'Brien said.

"We want to make sure we can hit the ground running."

That devastation redounds to venues as well.

Since the start of the pandemic, the Mason City Multipurpose Arena has accrued more than $100,000 in debt. Mason City Superintendent of Recreation Brian Pauly has said previously the space had more than a dozen events planned, such as the concert and a mixed martial arts night. 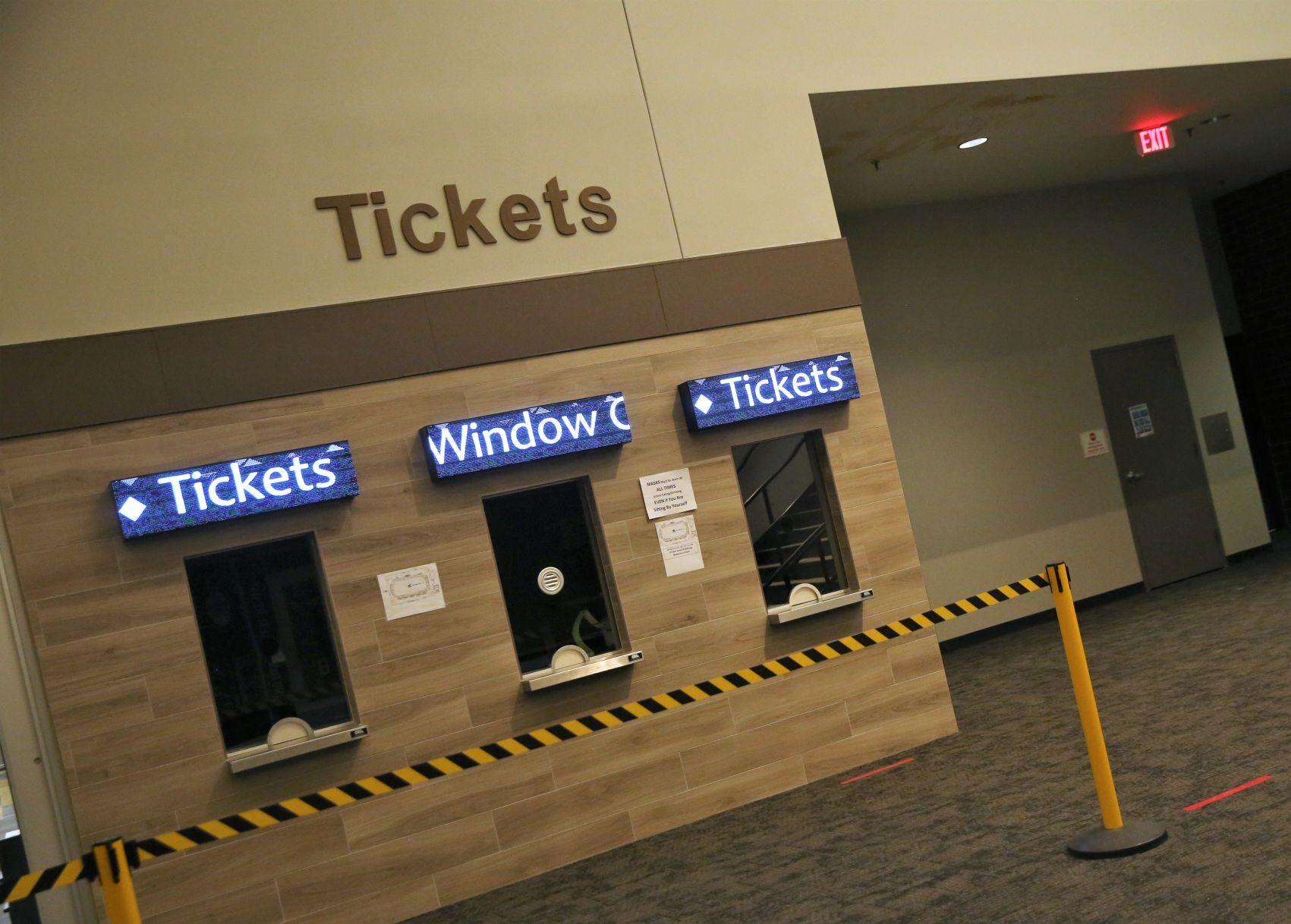 That all had to be shunted, so the Multipurpose Arena lost almost all of its revenue sources, except for North Iowa Bulls games, while still having to keep up with expenses. In the most recent meeting agenda for the Mason City Council, Mason City Finance Director Kevin Jacobson wrote that funds such as the Multipurpose Arena that were experiencing deficits would need a "General fund transfer before year end to bring them back in line." 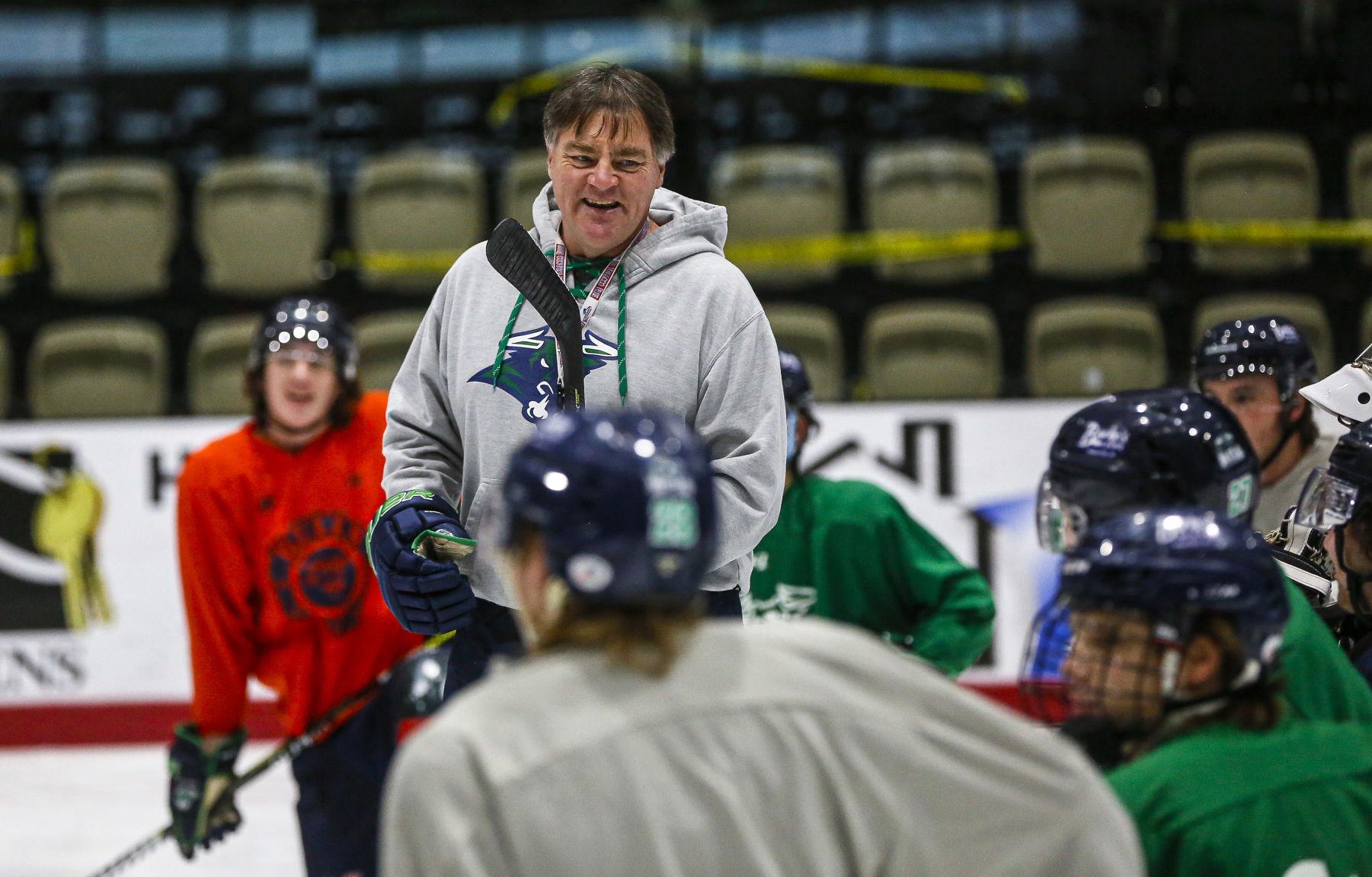 North Iowa Bulls Head Coach Todd Sanden jokes with his players as they take a knee before practice on Tuesday in Mason City. Sanden says that with a shortened season last year and with COVID-19 restrictions this year, what has helped the most is spending more time with his players. "That's really the joy of being able to do this is working with these young men and helping them prepare to become college hockey players. So, I think we've probably spent more time with our group and individually than we ever have in the past," Sanden said.

Despite such present issues, O'Brien is hopeful, not only for the concert on April 17, but for what the space means for future event planning as well.

"I think it’s going to allow North Iowa to bring higher-level national acts we haven’t had access to in the past. It’s by far the largest indoor venue for concerts in North Iowa. I hope North Iowa appreciates how nice of a facility it is," O'Brien said. He then shared that at the concert the plan is to announce three more shows for the summertime. 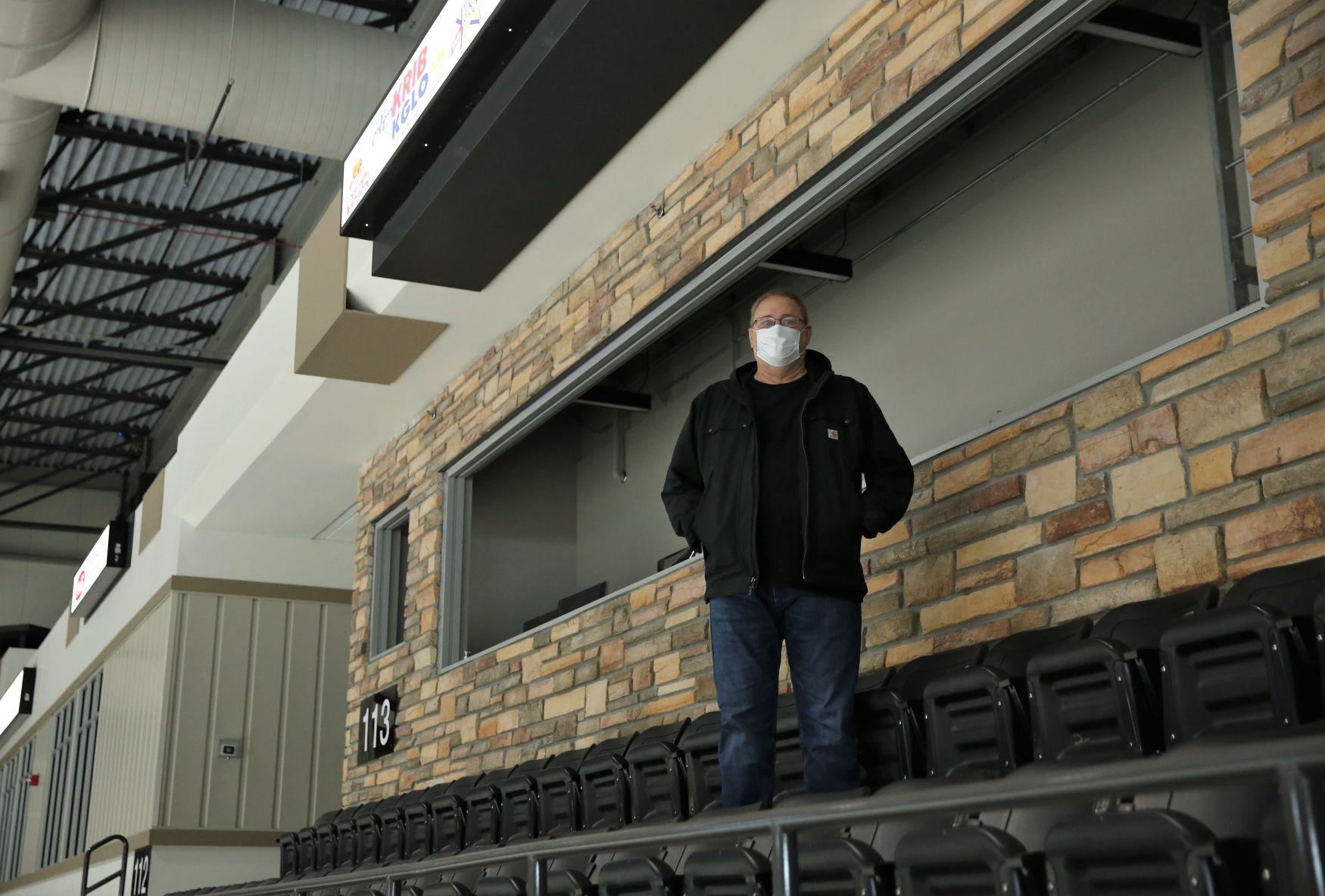 Concert promoter Michael O'Brien stands in the Mason City Multipurpose Arena, which is slated to host its first concert on April 17.

On top of that, O'Brien said he's even just excited that live music making a return to the region will mean that people will have some modicum of release in their lives again.

"Live music allows you to escape for a period of time. Escape from reality for a while and revisit a nice time in your life."

The pandemic pushed back that chance for escape but it'll be around again soon enough. 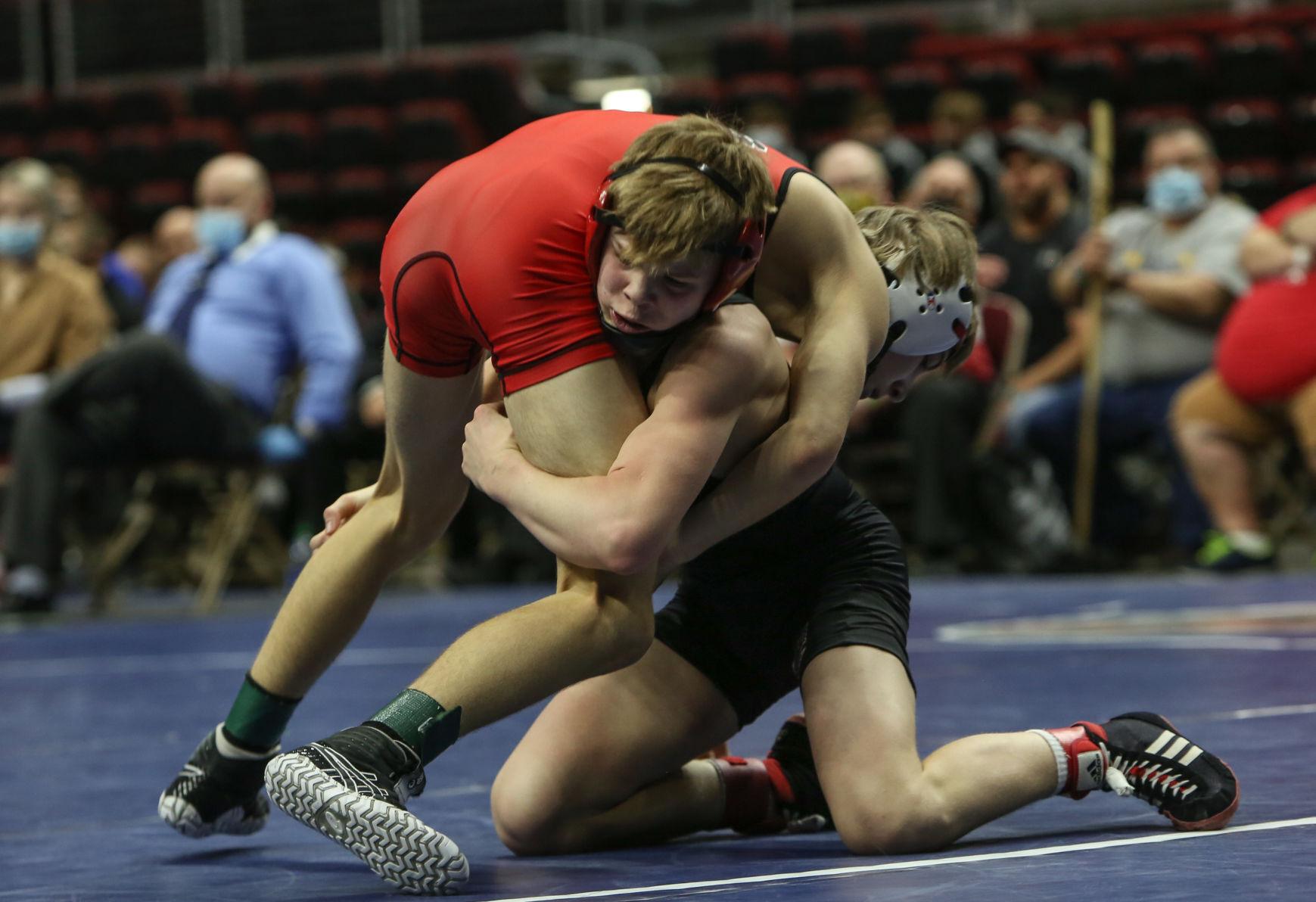 Dancing for the Dream will return to North Iowa this year.

The annual 43 North Iowa fundraiser, which was postponed and then canceled in 2020 due to the COVID-19 pandemic, will be held on June 5 at the Surf Ballroom & Museum in Clear Lake. 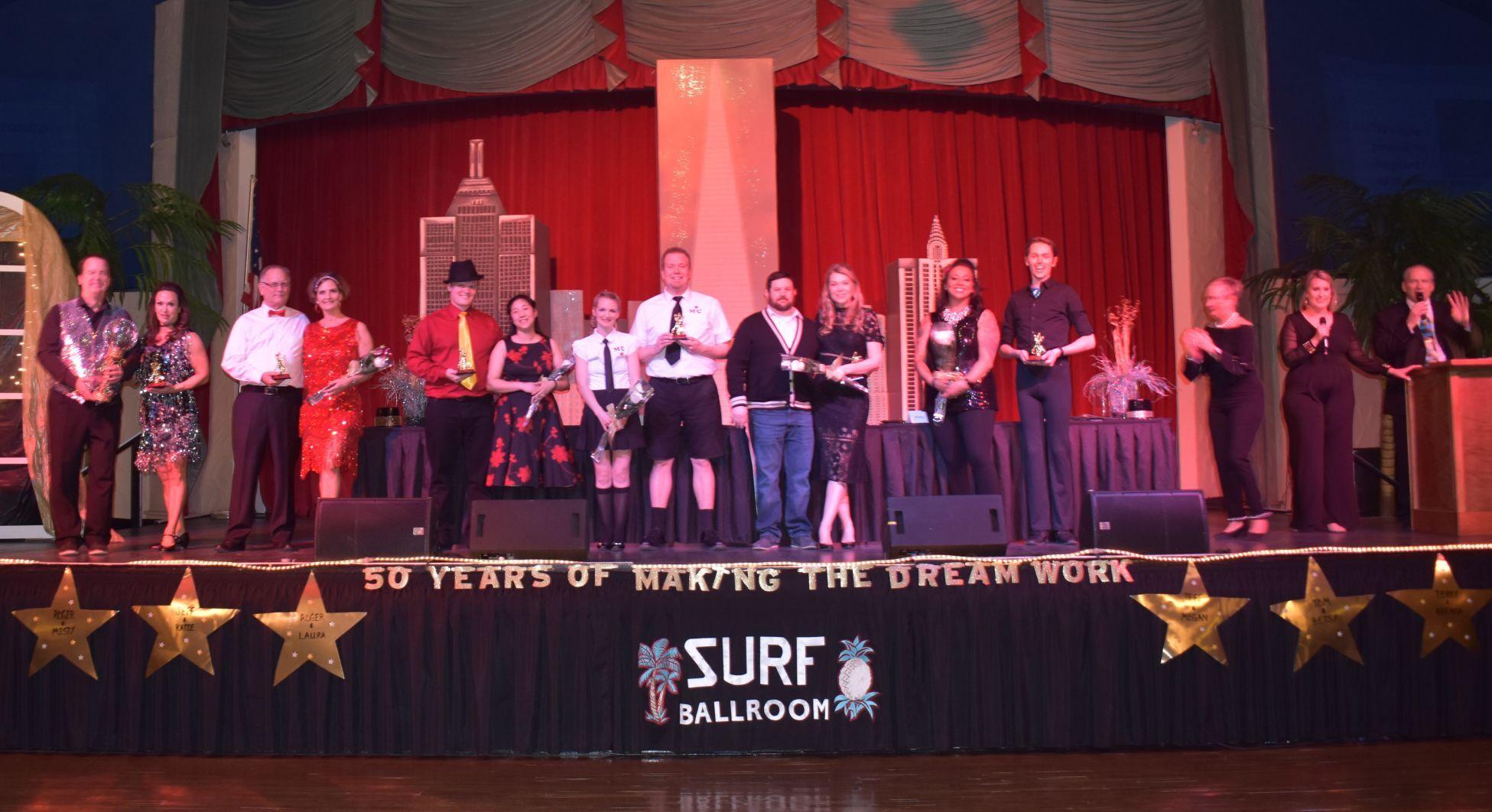 Six couples competed in the 11th annual Dancing for the Dream fundraiser for North Iowa Vocational Center at the Surf Ballroom in Clear Lake in March 2019.

“We are excited to be putting it on this year; we’re looking forward to having a good time for a good cause,” said John Derryberry, 43 North Iowa executive director.

Historically, Dancing for the Dream has taken place in March, but after conversations with CG Public Health officials, 43 North Iowa determined it was best to hold the event in June when COVID-19 vaccines were more widely distributed and warmer weather provided an outdoor alternative for the event if necessary, Derryberry said.

Dancing for the Dream is 43 North Iowa’s largest fundraiser of the year.

Since the event started in 2009, it has raised more than $300,000 to support the Mason City-based nonprofit's mission.

43 North Iowa supports the home, employment and community experiences of people with disabilities in North Iowa.

Its mission is “Helping people with disabilities find their way through home, employment and community experiences,” and it serves more than 350 people in North Central Iowa. 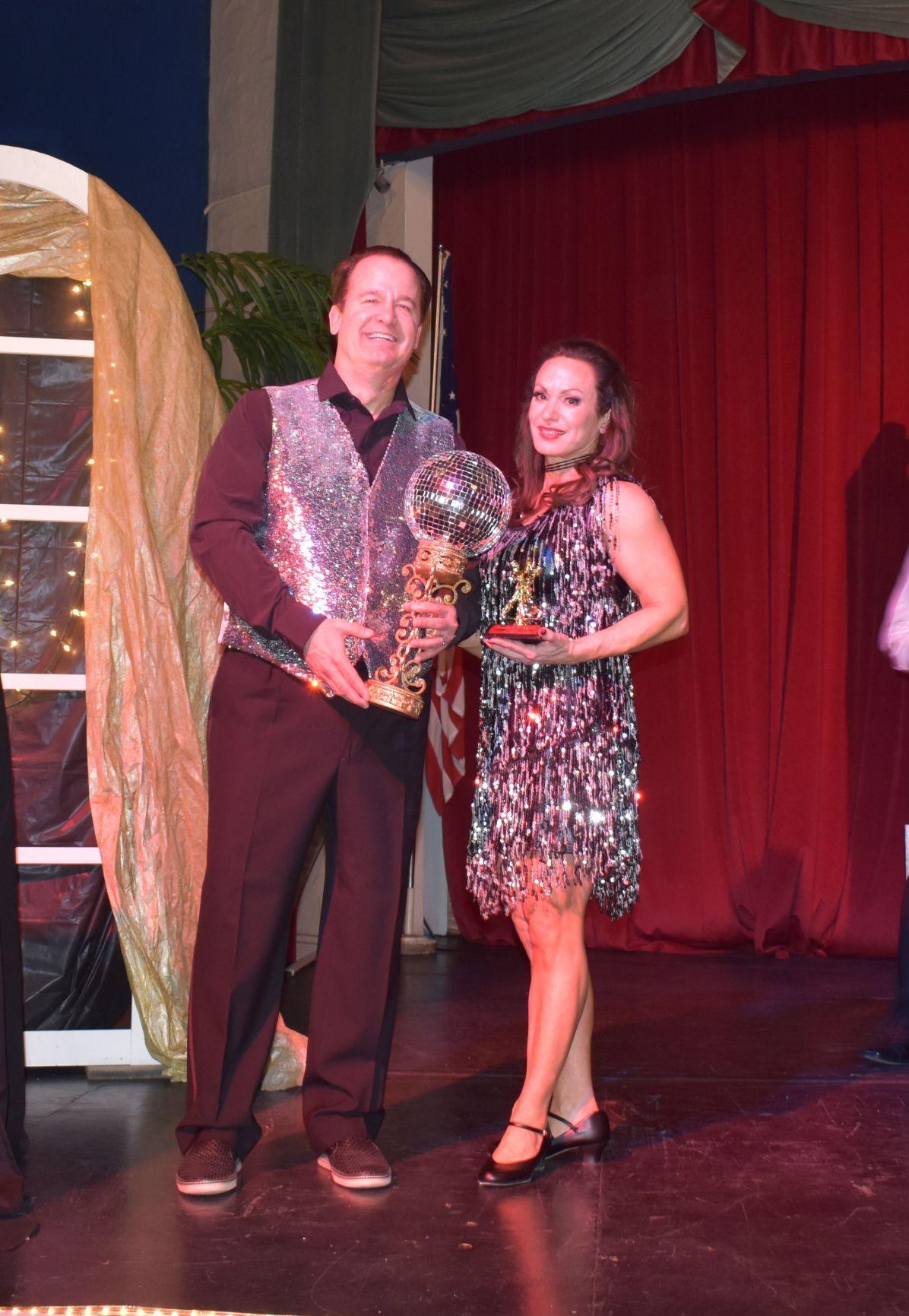 Terry and Brenda Wisner with the crystal ball trophy after winning the Dancing for the Dream competition March 30.

Although 2021 will be a new Dancing for the Dream event, many of this year’s scheduled dancers will compete for the Crystal Ball trophy for raising the most funds for the cause.

Derryberry said the event’s official lineup will be announced in the near future.

“We’re excited so many remained committed to us and we were able to stay committed to them and offer a spot to them, so they can show off a little bit,” he said.

The 2021 Dancing for the Dream will be Derryberry’s first. 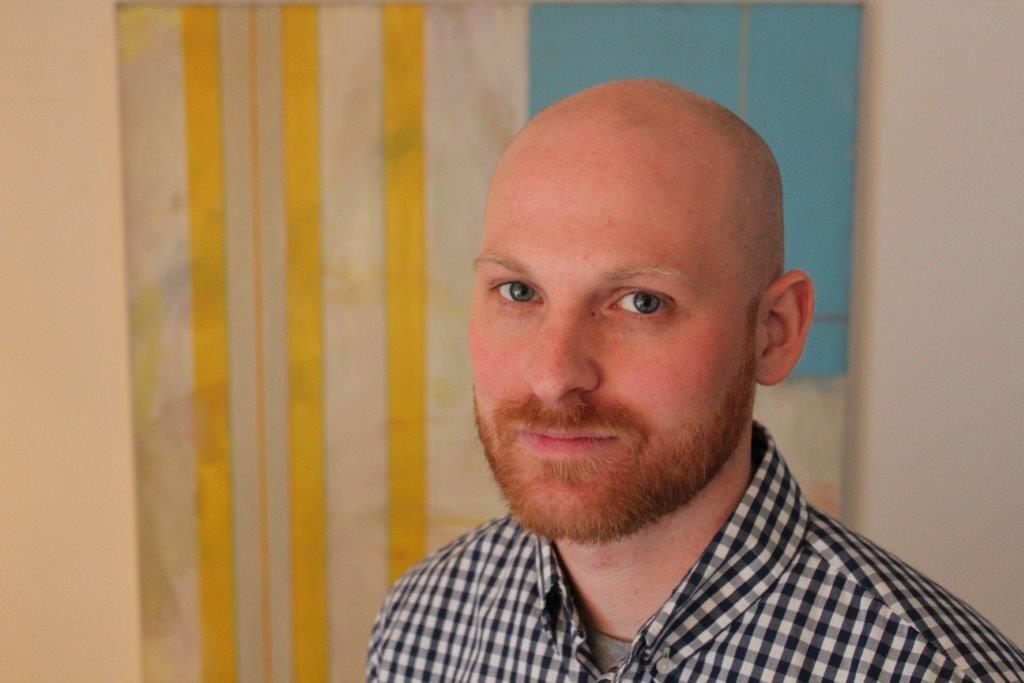 He was hired as associate director with 43 North Iowa in the fall of 2019.

“I’m excited to see how we pull it off and how the community rallies behind organizations like this and supports them,” Derryberry said.

Derryberry was among the North Iowa “celebrity” dancers scheduled to compete in the 2020 contest, and although he’s now the organization’s executive director, he still plans to dance, so he can “get the full experience of Dancing for the Dream.”