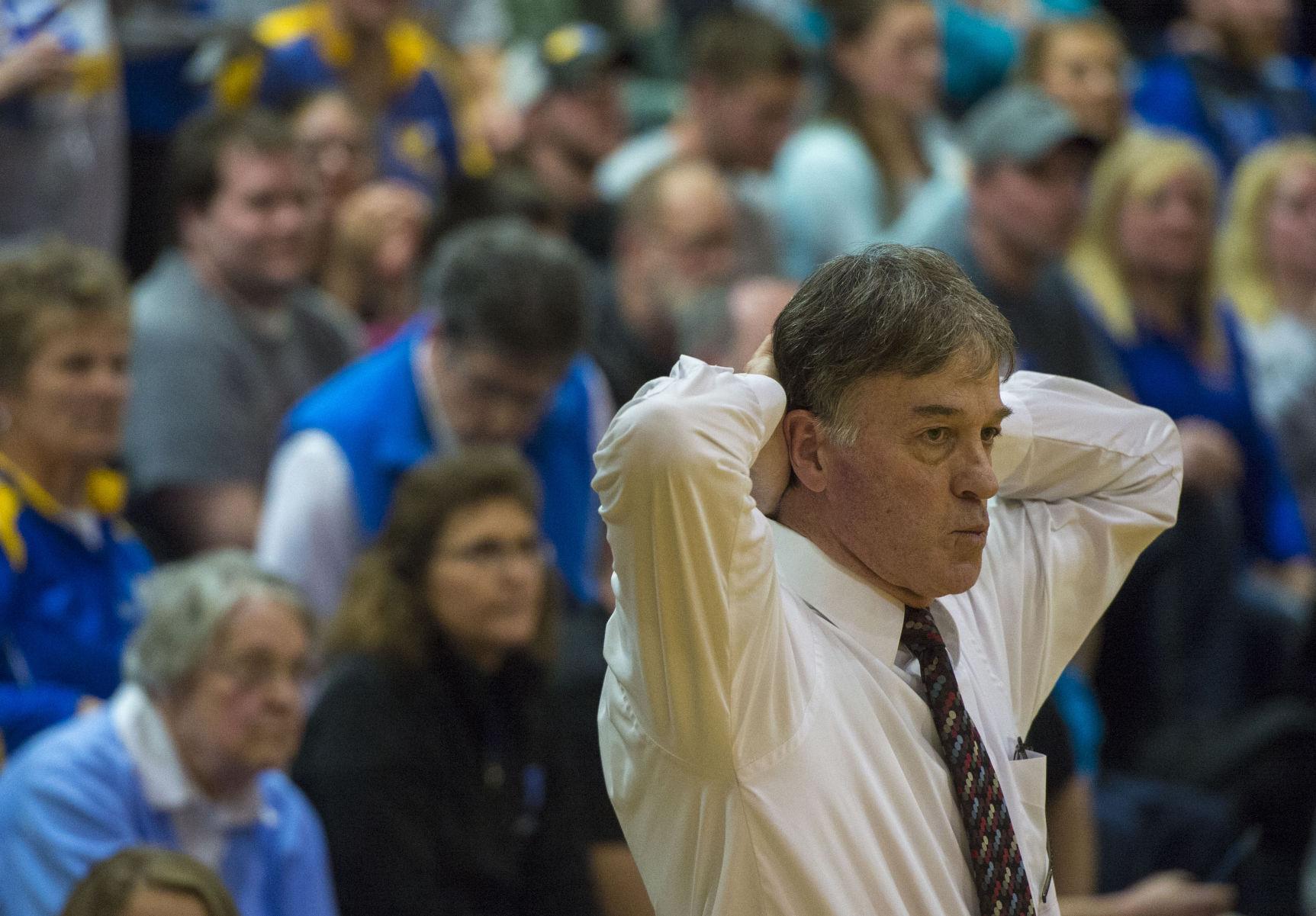 West Fork head coach Frank Schnoes reacts as the Warhawks' deficit widens in the fourth quarter during their loss against Don Bosco Monday in Clear Lake. 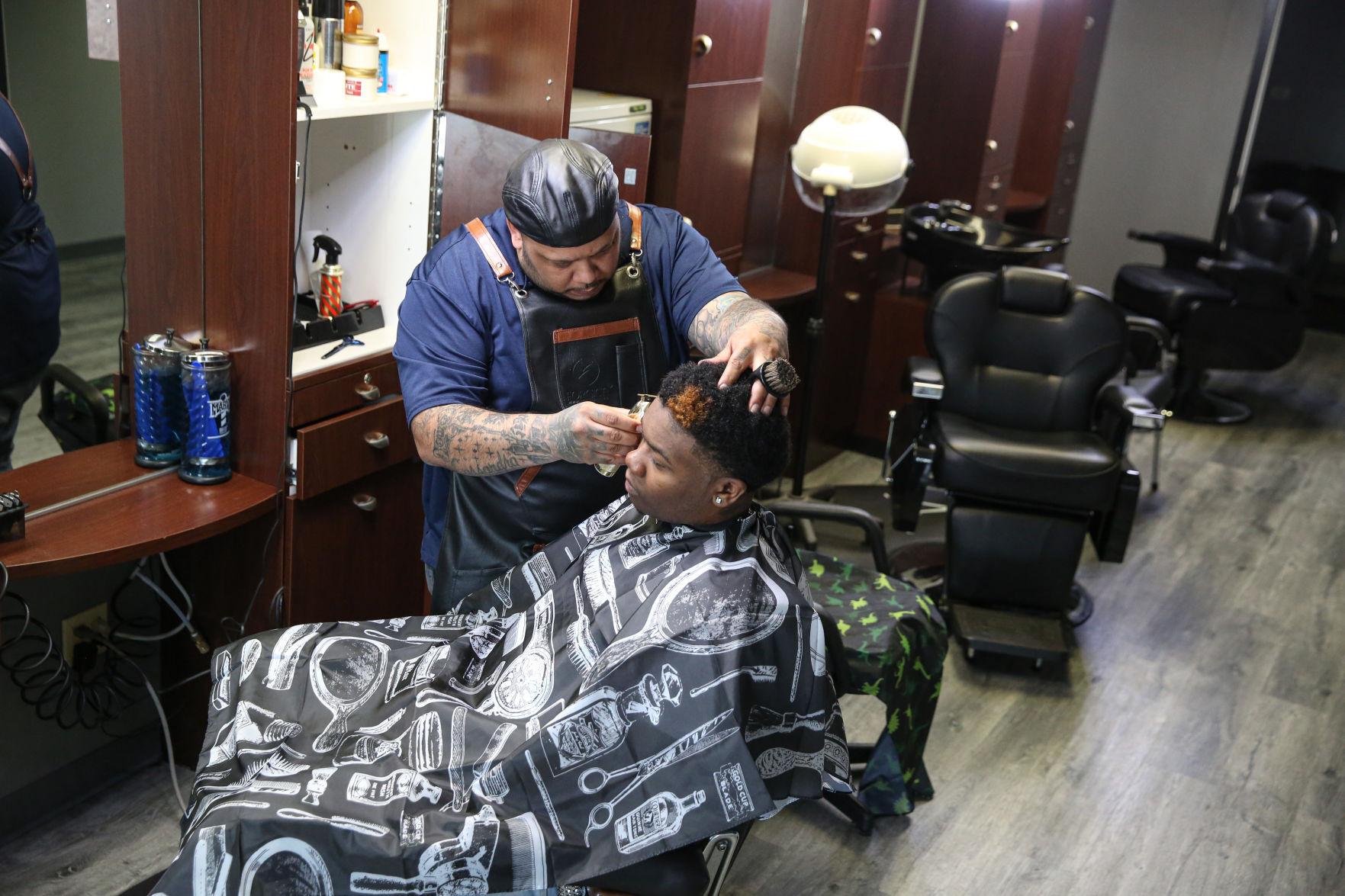 After a lifetime of haircuts, Mason City's Lee is handing over his shears

MASON CITY — At age 85, Don Lee decided it was time to pass the shears.

"I feel that for you to be a barber, you've got to be well rounded," Calaway said while tapering the sides and the back of a customer's hair "It’s a quick and easy way to get cleaned up," he said.

Being well-rounded to Calaway means being as adept at such high and tight military-style trims for men as he would be doing, say, a balayage style for women which has a steady gradation of "lightness" moving toward the ends of the hair. Calaway said that he owes that versatility to time spent at La'James College of Hairstyling in Mason City as well as the American College of Hairstyling in Des Moines for his barber's license. 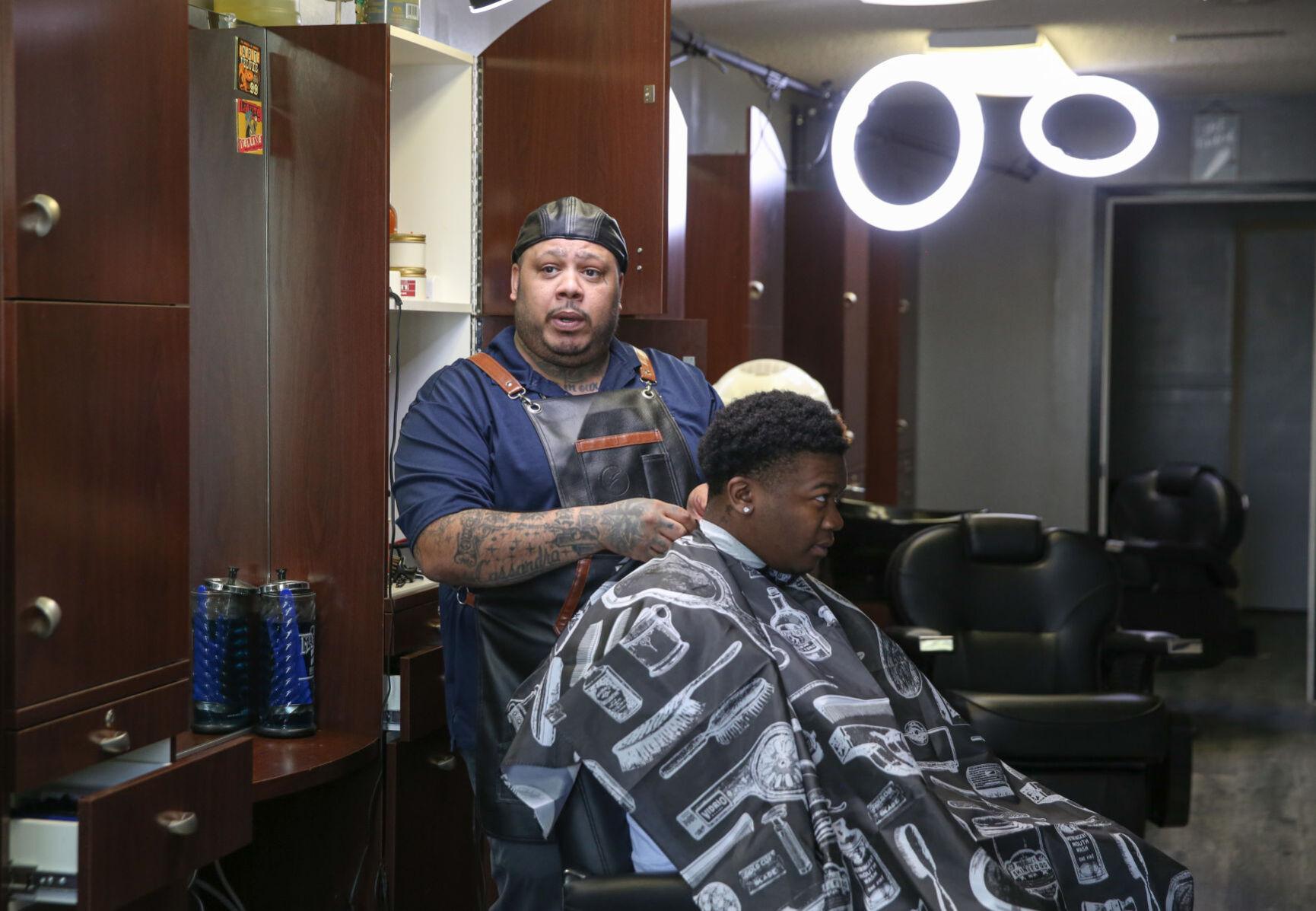 "My instructor in barber school was a Navy man and he pounded us in those areas (high and tight styles). I used to hate the old military flattop (but) he pounded me with that for two weeks," Calaway said. He then shared that the instructor would throw away a student's razor guards if he caught them with one.

According to Calaway, the time in barber school helped him land that first gig taking over for Lee on East State Street in 2016. "I cut his grandson’s hair to show him what I wanted to do and he just gave me a key and said, ‘I retire. This boy can do it.’"

MASON CITY | Don Lee is known throughout North Iowa as a man who was either holding a barber's clippers or gardening tools.

As for the newer venture, which Calaway opened near the start of April, he said that a client of his mentioned that their dad owned a space that could work and Calaway seized on the opportunity.

"I felt it was a great spot from the simple fact that I can see everything coming toward me while I’m working," he said. "And not only that, on the southside, you’ve got traffic from Pizza Ranch, the YMCA, Charlie Brown is right there, the dentist office, the bank."

While Calaway is all moved in and has been going strong for about a month, he made sure to point out that his store is by no means in its finished state yet. Upstairs, the location has a boutique called "Everything's Fashion" managed by Bianca Miles. Soon enough, Calaway said that that endeavor will be joined by a tanning salon his wife will run and nail technicians. His niece will also work at Kut$ by KZ, doing aesthetics work. 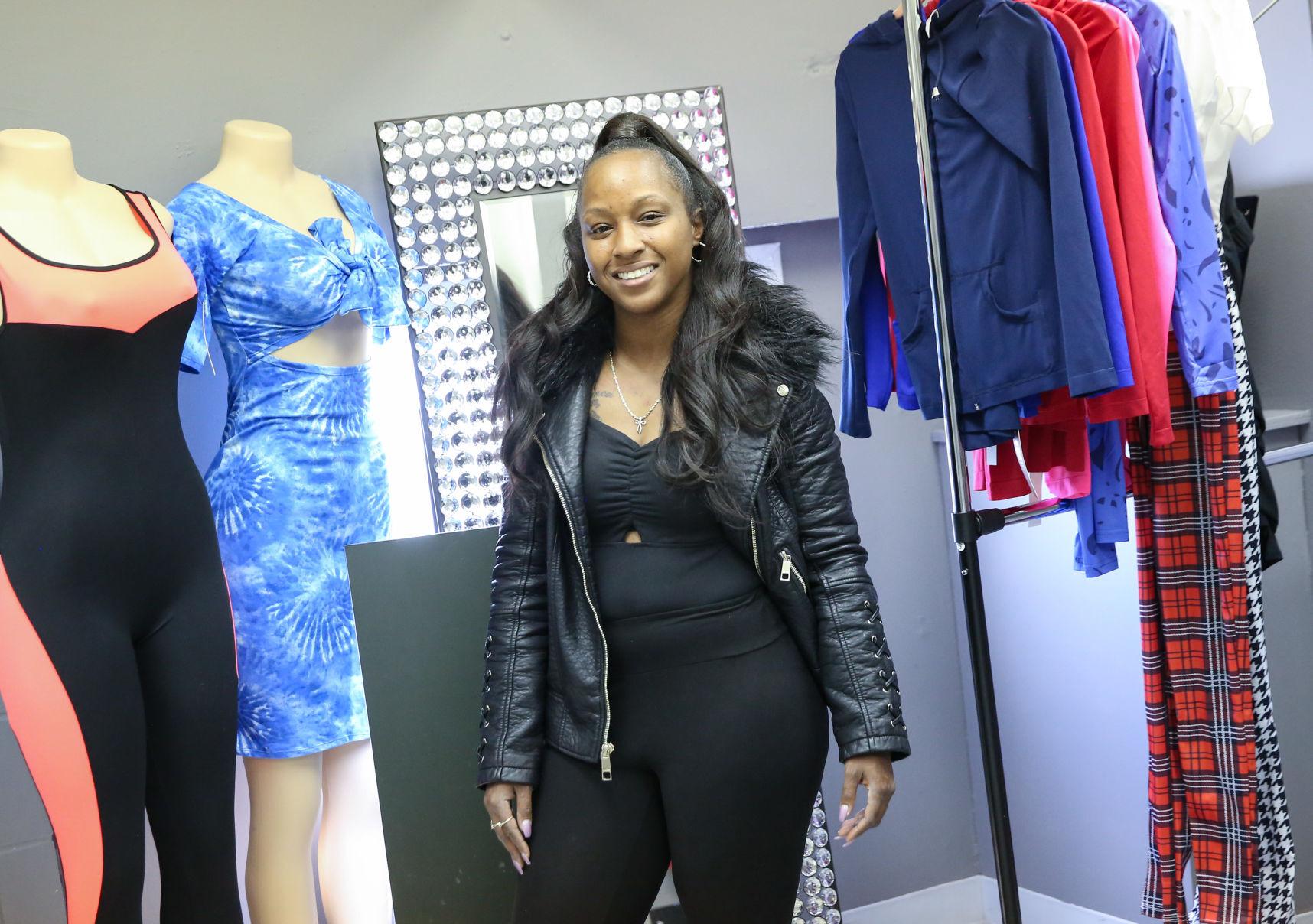 Bianca Miles stands in her boutique Everything's Fashion located above Kut$ by KZ on South Monroe Avenue in Mason City.

Part of Calaway's motivation for hiring family members is philosophical.

"I’m big on believing that everybody should work for themselves instead of working for a company. You make a better living for you and your children," he said. And he wants to try and help forge those familial connections between his customers as well, which is why he said he offers a father-son special. He wants parents more involved in their children's lives.

Calaway said that he welcomes them to his shop. Youth and adults. Men and women. Black people and white people. "In all aspects, I feel you’re not a real barber until you cut everybody’s hair: Men, women, children," he said.

Clear Lake High School Senior Cortney Griffith is attending night school and hoping to bulk up her grades before graduation.

Frequently a target of bullies, and shy by nature, Northrup would never raise her hand in class, opting to struggle on her own rather than draw attention to herself, she said.

Switching to online education through Clear Lake, Northrup's struggles were exacerbated by the COVID-19 pandemic and the need to drive to South Dakota every other weekend to visit her parents. This year, she found her goal of graduating early in December 2021 jeopardized by her grades.

Northrup is not alone. As students who spent months learning online last year due to the COVID-19 pandemic return to more traditional classroom settings, they are finding themselves behind in meeting the standards that would allow them to be successful in their next grade.

Whether it was from technological difficulties, a lack of consistency from the student or educators unaccustomed to online teaching, the pandemic negatively impacted students for nearly a year.

As students convened for in-person school in Clear Lake this fall, the gap became apparent in students' grades. One of the solutions promoted by Clear Lake High School Principal Chris Murphy was a "night school," where students could come after school and spend a couple of hours in a smaller student-to-teacher ratio setting and study.

The district committed some of its CARES Act money to the cause and four teachers, including special education teacher Sean Halverson, signed up to help.

"Night School" runs from 4 p.m.-6 p.m. two nights a week and is entirely voluntary. Halverson said teachers reach out to students who appear to need the help with the suggestion they attend. If the student doesn't show, a call is put in to the student's parents. The district also arranges for transportation as necessary, but quite a few of the students simply stay after the end of the school day at 3:15 p.m. That way, they can talk with teachers as needed for additional coaching before heading to night school at 4.

Superintendent Doug Gee touted the program in a recent school board meeting, noting that students' grades were climbing.

"They're doing some amazing things there," he said.

Between 18-22 students attend each session, Halverson said. While he believes that the pandemic certainly impacted students' learning, he thinks it impacted their mindsets toward learning more.

"They went from having 2 weeks break around the holidays each year to months off," he said. "And then we all faced a bunch of unknowns. Would we go back to school? Go online?"

Halverson said he estimated about 60 percent of the students in night school wouldn't be there in a "normal" year.

Night school began shortly after spring break and will continue through next week. For those who need it, it will roll over to summer school.

Halverson said he's seen success with the program. He said he has one student who was failing all their classes but is now earning passing grades in three of them.

"The key is to see if that success can be maintained," Halverson said. The goal is not for night school to be another study hall, but rather an all-around learning experience that teaches kids how to learn better on their own. The focus is at least as much on developing skills as it is completing lessons.

"This just gives us more time to focus," said Northrup, who hopes to get a job one day working with the horses she loves. "It's easier to do, working 1-on-1 instead of in a room full of people."

The North Iowa Band Festival promises a jam-packed weekend of a variety of entertainment — and it's now only weeks away.

In a recent press release, the Mason City Chamber of Commerce outlined entertainment plans for the festival, which takes place May 27-31.

North Iowa Band Festival activities will kick off with a Thursday night performance from the Mason City Municipal Band.

Saturday's entertainment will begin with the highly anticipated parade at 10 a.m. As a COVID-19 precaution, distributing candy, flyers and other trinkets during the parade will be prohibited this year — however, kids can still pick up candy bags at the "Instrument Petting Zoo," which will be set up in Central Park.

The Mohawks Danzers will perform at 1:30 p.m. in front of the Main Stage, which will be followed by the awards ceremony at 2 p.m.

North Iowa Band Festival activities will also include a carnival, concessions and a marketplace that will take place throughout Memorial Day in downtown Mason City.

Also, for those who want to enter the parade, it's not too late — yet. Applications received after May 10 will be subject to a $25 late fee.

Parade entries will compete for Grand Marshal honors for reflecting best use of the festival theme ("Banding Together and Marching Forward") and for the Mr. Toot award, which recognizes the best use of any theme.

The theme for the annual festival recognizes the unfortunate events of the past year with a positive wordplay: "Banding Together and Marching Forward."

COVID-19 vaccinations are encouraged for festival attendees, a press release from the Mason City Chamber of Commerce said.

"Festival-goers who receive their COVID-19 vaccination this week will be fully-vaccinated by the time of the festival," the release advised. "According to the CG Public Health officials, ample doses of the vaccine are available at distribution points throughout Cerro Gordo County and North Iowa.