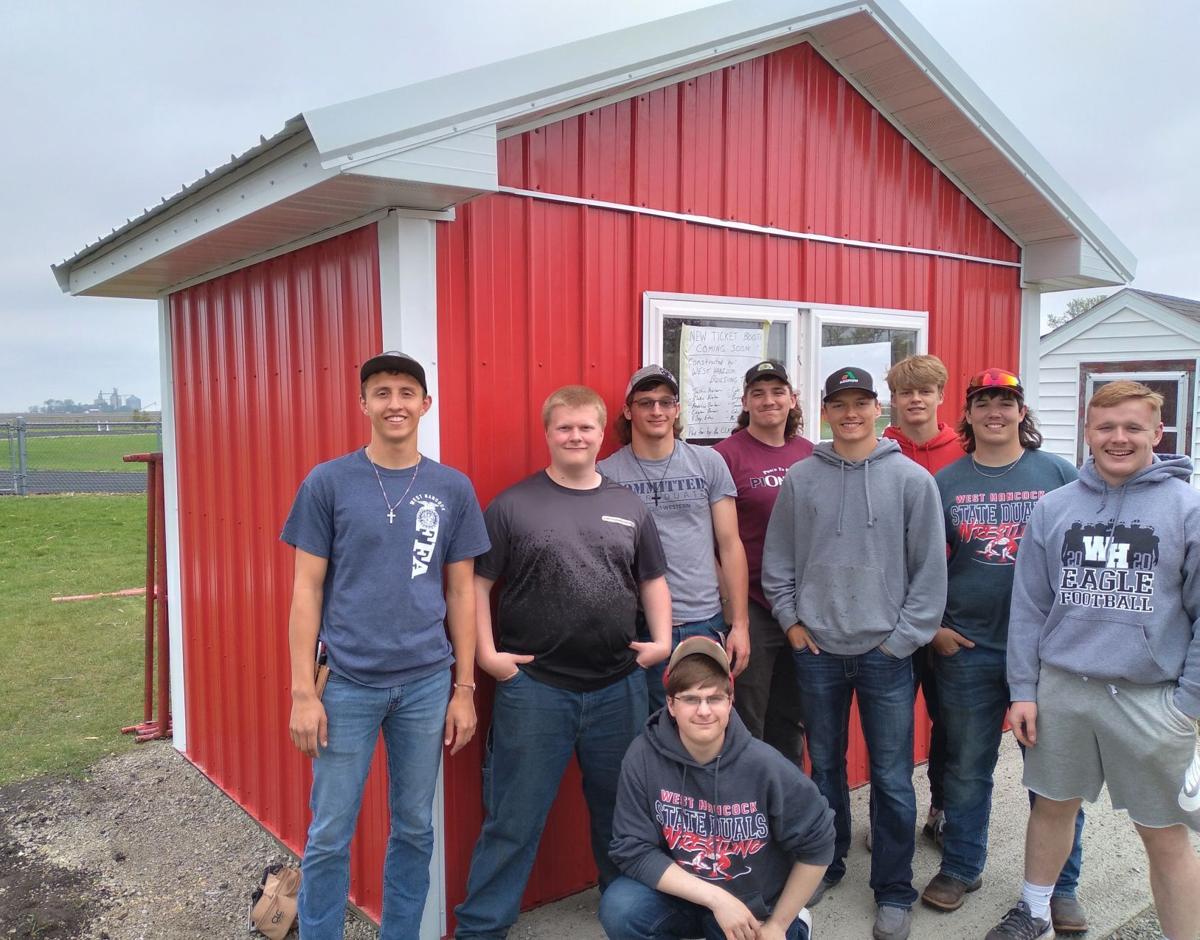 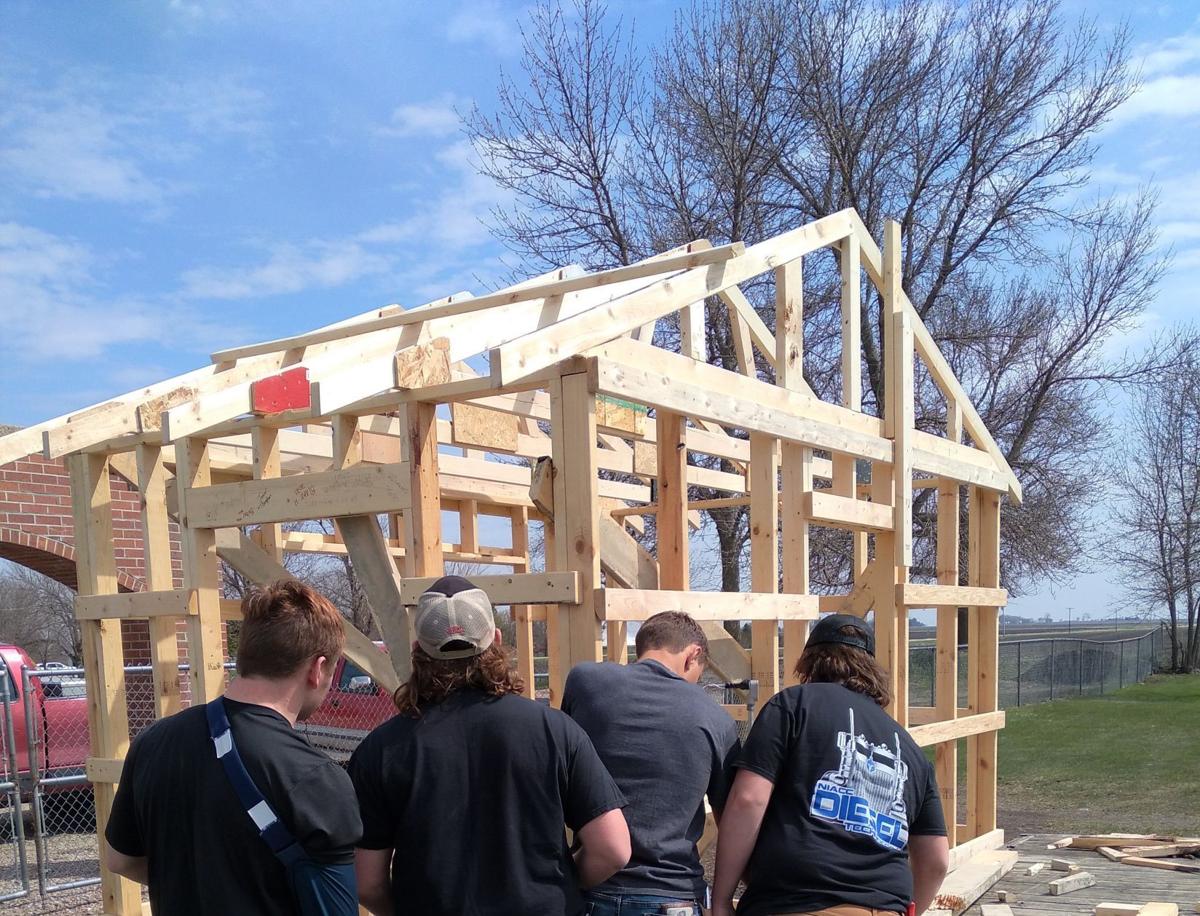 The building trades class, which part of industrial technology at WHHS, works on framing the new ticket booth that students built, utilizing fund reserves from the Class of 2020. 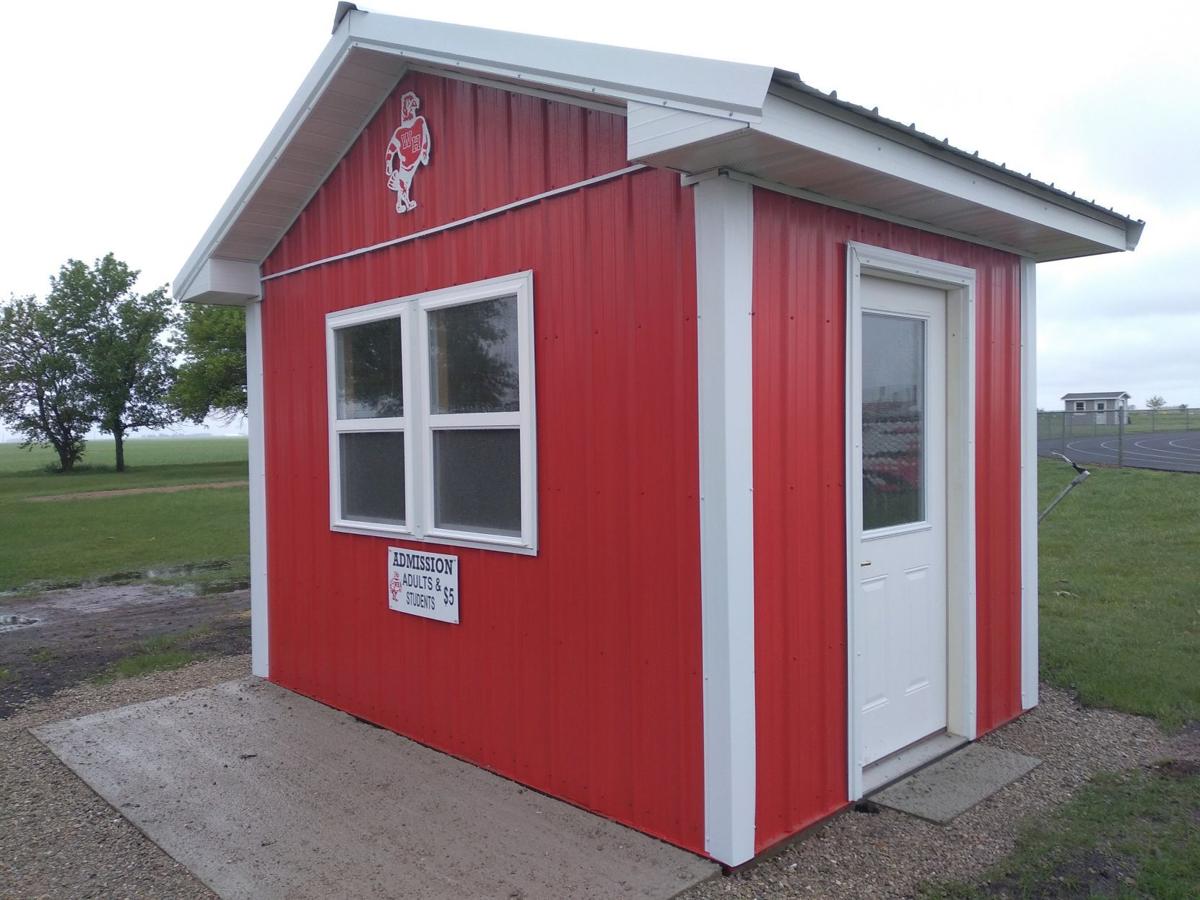 The new WHHS ticket booth on the south side of the football field resulted from reserve funds designated to the building project by the WHHS Class of 2020 and the hard work of WHHS Building Trades students. 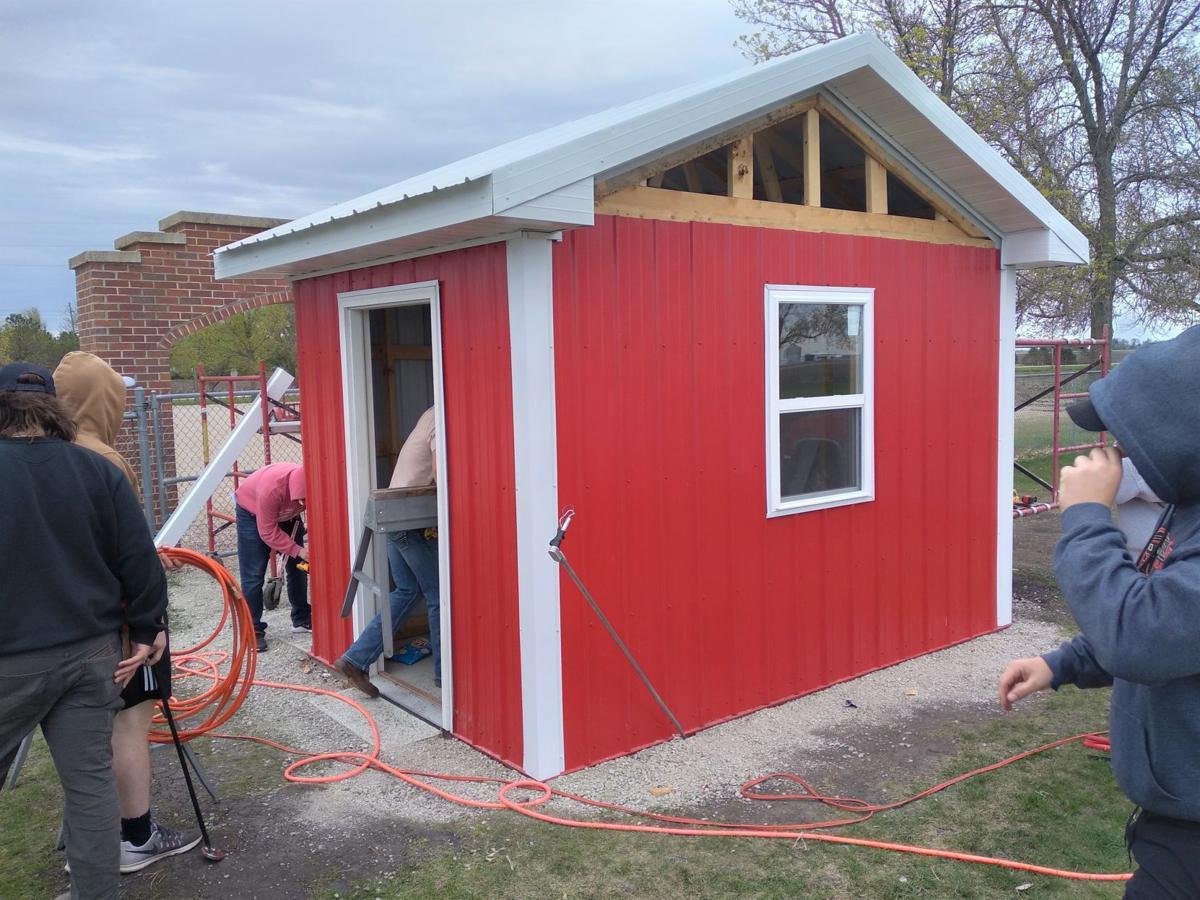 Red and white steel siding quickly went on a new ticket booth that should be used and useful for many years. Nine students from Paul Francis' WHHS building trades class completed the work. The WHHS Class of 2020 designated unused funds to make the project possible.

West Hancock High School will not soon forget its Class of 2020. This original COVID-19 perseverance class was deprived of its senior trip, senior prom, and a normal high school graduation ceremony.

So what did the WHHS Class of 2020 members do when life appeared to be handing them lemons? They made lemonade by contributing their funds that would have gone toward their memorable senior activities, instead investing in the future of their school.

That investment of just over $6,166 by the Class of 2020, along with the donated labor, skills and hard work of instructor Paul Francis’ building trades/industrial technology students, is the sacrifice that helped quickly build a badly needed new ticket booth. One of several options for using leftover funds, it now stands on the south end of the WHHS football field.

Francis’ building trades students started the construction project in early April and substantially completed its construction prior to the last day of school on May 24. Francis, agriculture/FCS instructor Carolyn Badje, and business instructor Ryan Wagner were putting some final touches on the building in the days immediately following the close of another school year. It replaces what was technically a children’s playhouse, according to Francis, but was being used as a makeshift ticket booth.

At the Dec. 21, 2020, board of education meeting, school board members approved the request of the Class of 2020 to donate its remaining/unused class funds for building the ticket booth at the football field.

Parents Kevin Eisenman and Brenda Smith addressed the board on that night, requesting that the Class of 2020 funds be used as students had voted – going toward the new ticket booth construction project with any excess funds going to the Class of 2022. Some students from the Class of 2020 were also present at that meeting.

Francis said that the Class of 2020’s financial contribution will cover the entire cost of the newly finished ticket booth building. He also said it was good to complete the project this year with rising building materials costs creating price uncertainties.

“The old one was in bad shape,” Francis said. “It was used but it was not what was needed. This one is much more functional and looks really nice. My classes have done all the work, getting the walls up and steel sheets on it. The kids have done a great job with this project.”

Francis said that upon the urging of some Class of 2020 parents, Badje and Wagner helped cut and paint some steel eagles for placement on both the front and back of the new building while he was finishing trim and tightly sealing the new building.

He said a small sign on the outside and laser engraved plaque on the inside will acknowledge the contributions of the WHHS students and the Class of 2020.

“I think they wanted to have something that leaves a legacy,” Francis said. “It will be used and useful. The sign will say that Class of 2020 funds paid for it.”

“It was such a good experience for the kids,” Francis said. “The building trades class built three other sheds first, which gave the students some experience.” He said the prior ticket booth was the first building constructed under his watch when he arrived at the school in 2003, but it had a small, non-standard sized door with few, poorly placed windows.

The new building is eight by 12 feet, but larger and functionally much better, according to Francis.

The new ticket booth has two large double hung windows on the east side for taking tickets, which can be slid up and down from the bottom during cold, rainy, or windy weather. It also has a window on the west side so events can be viewed from inside and to provide additional ventilation. There is a standard sized door with a window as well.

“They did a good thing by using their leftover money and voted to do what they wanted with it,” said Superintendent Wayne Kronemann. “The project came to fruition after going to the school board and industrial tech.”

He and students then coordinated with North Iowa Lumber and Design in Britt, which donated use of a skid loader for dirt work. Students prepared dirt and gravel, set up frames, and poured concrete for a solid foundation. They pre-framed walls indoors during cold and wet spring weather before setting up the walls and installing and bracing rafters outside. Then, red and white steel siding, windows, and soffits were installed – just before school was out of session for the summer.

The building trades class, which part of industrial technology at WHHS, works on framing the new ticket booth that students built, utilizing fund reserves from the Class of 2020.

The new WHHS ticket booth on the south side of the football field resulted from reserve funds designated to the building project by the WHHS Class of 2020 and the hard work of WHHS Building Trades students.

Red and white steel siding quickly went on a new ticket booth that should be used and useful for many years. Nine students from Paul Francis' WHHS building trades class completed the work. The WHHS Class of 2020 designated unused funds to make the project possible.