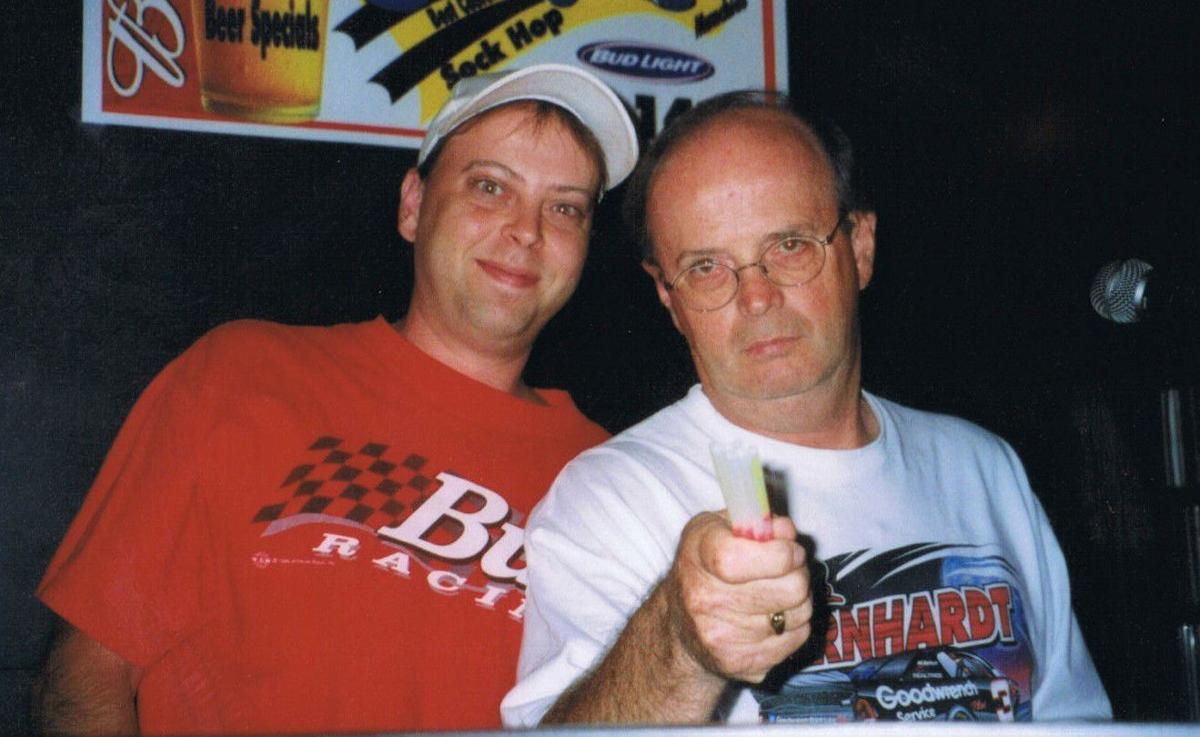 Son Shawn and father Phil Torgerson some years back at the Super Bowl in Forest City. 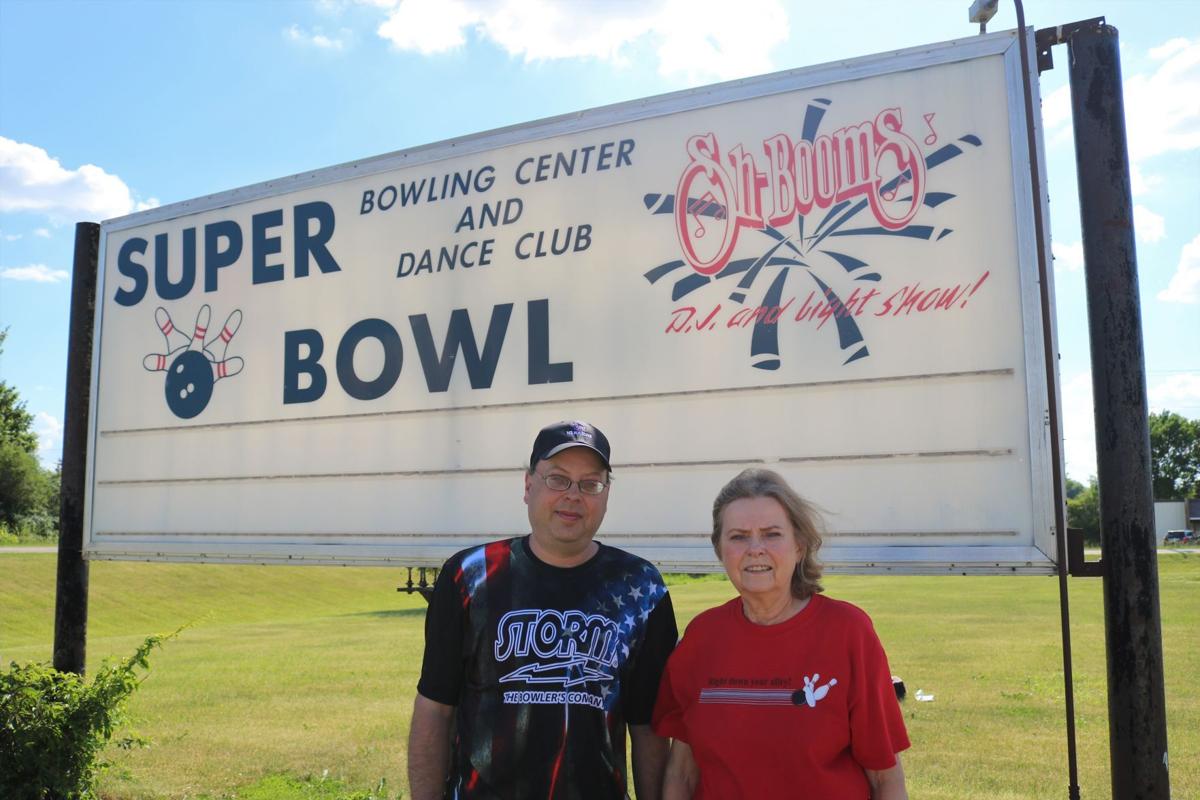 Many things have changed at the Super Bowl in Forest City in recent years and through COVID-19, but the sign out front and Shawn and Ruth Ann Torgerson have endured. 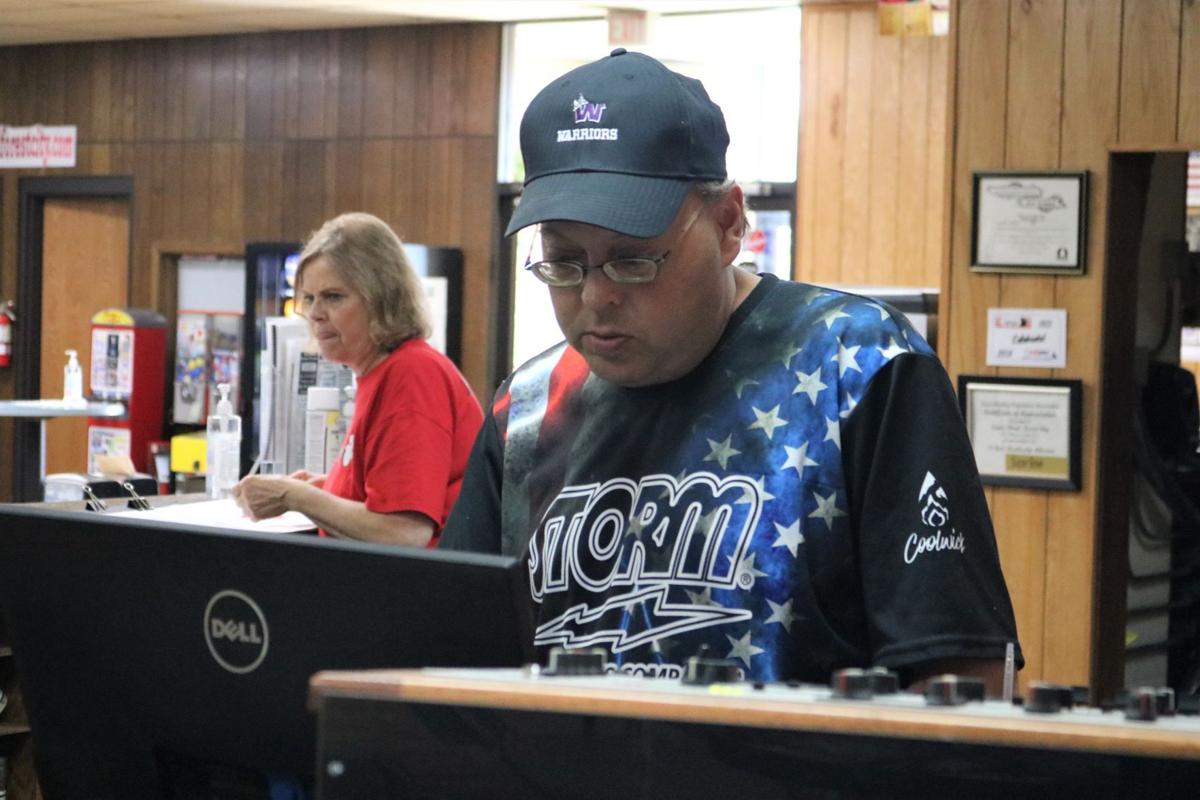 Owners Ruth Ann and Shawn Torgerson are shown working behind the front desk at the Super Bowl in Forest City on June 9. 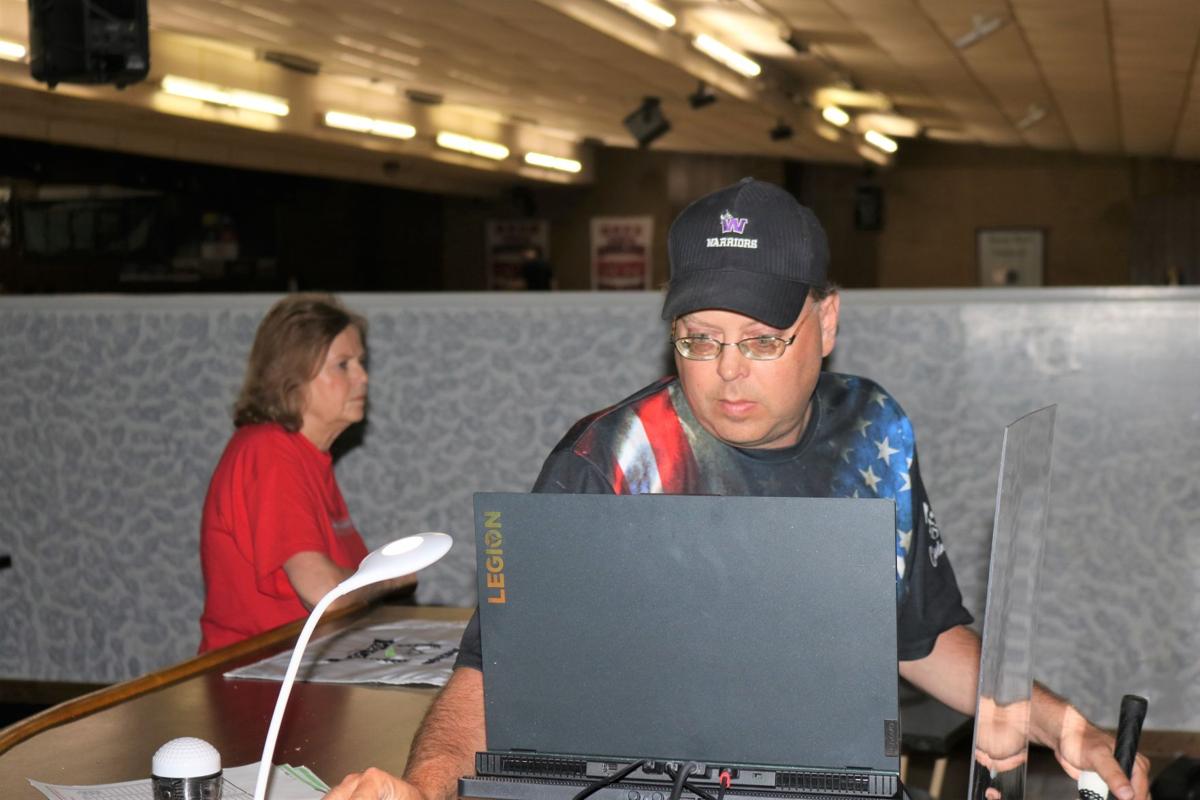 Shawn Torgerson sets the golf simulation from a computer at the Super Bowl while his mother, Ruth Ann Torgerson, watches the video screen on the bowling alley's latest attraction. 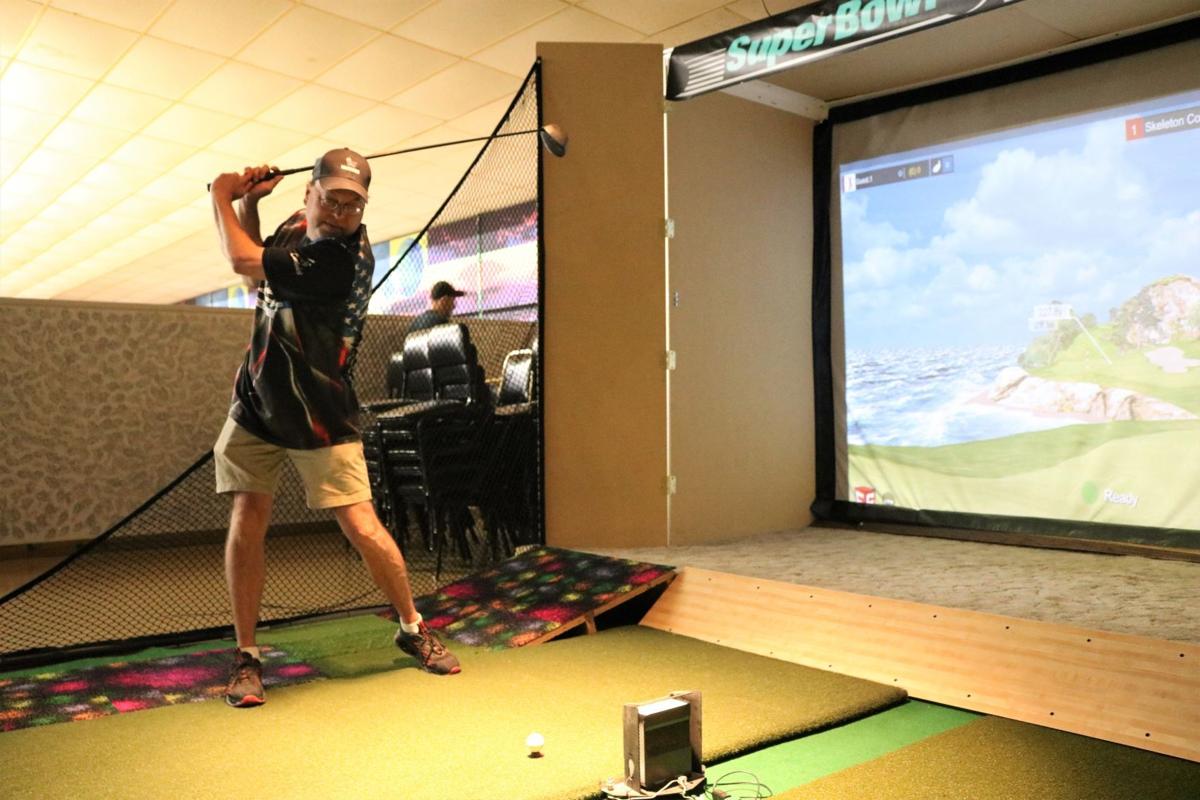 Shawn Torgerson takes a golf swing at the Super Bowl. 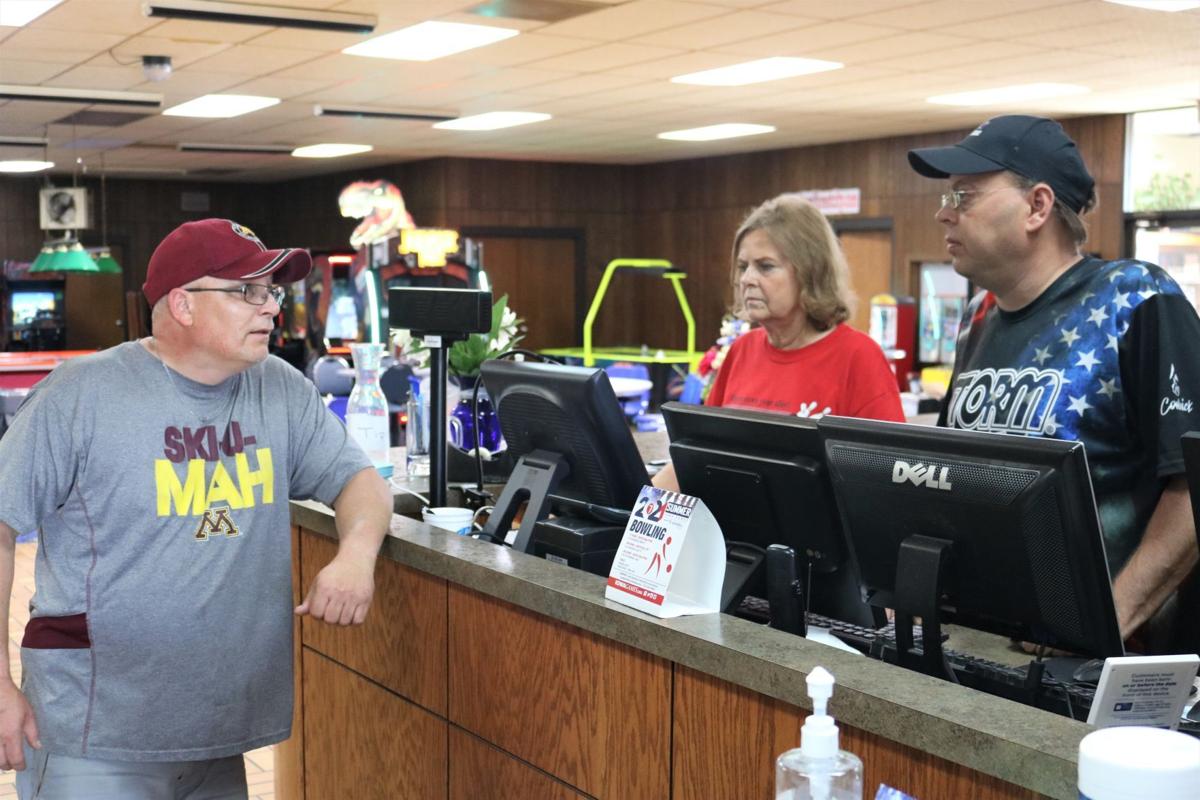 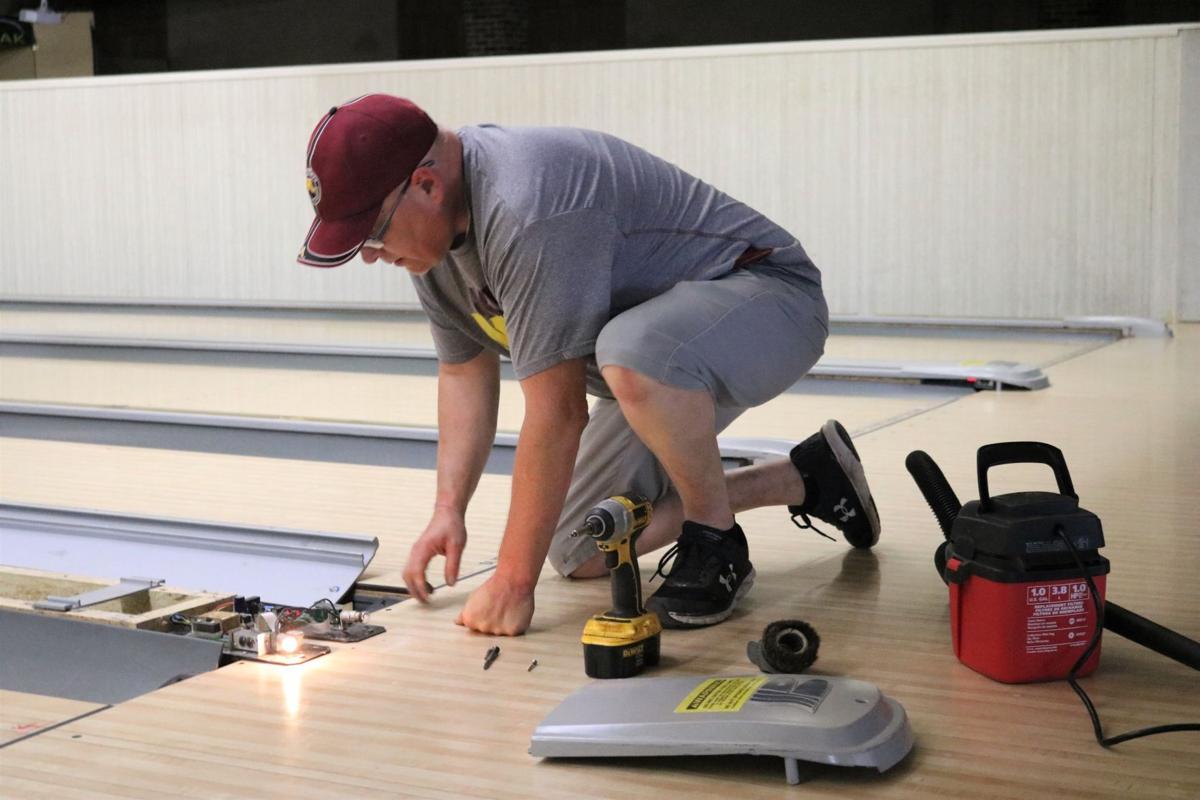 Mike Johnson was found fixing foul lights on a bowling lane at the Super Bowl on June 9. 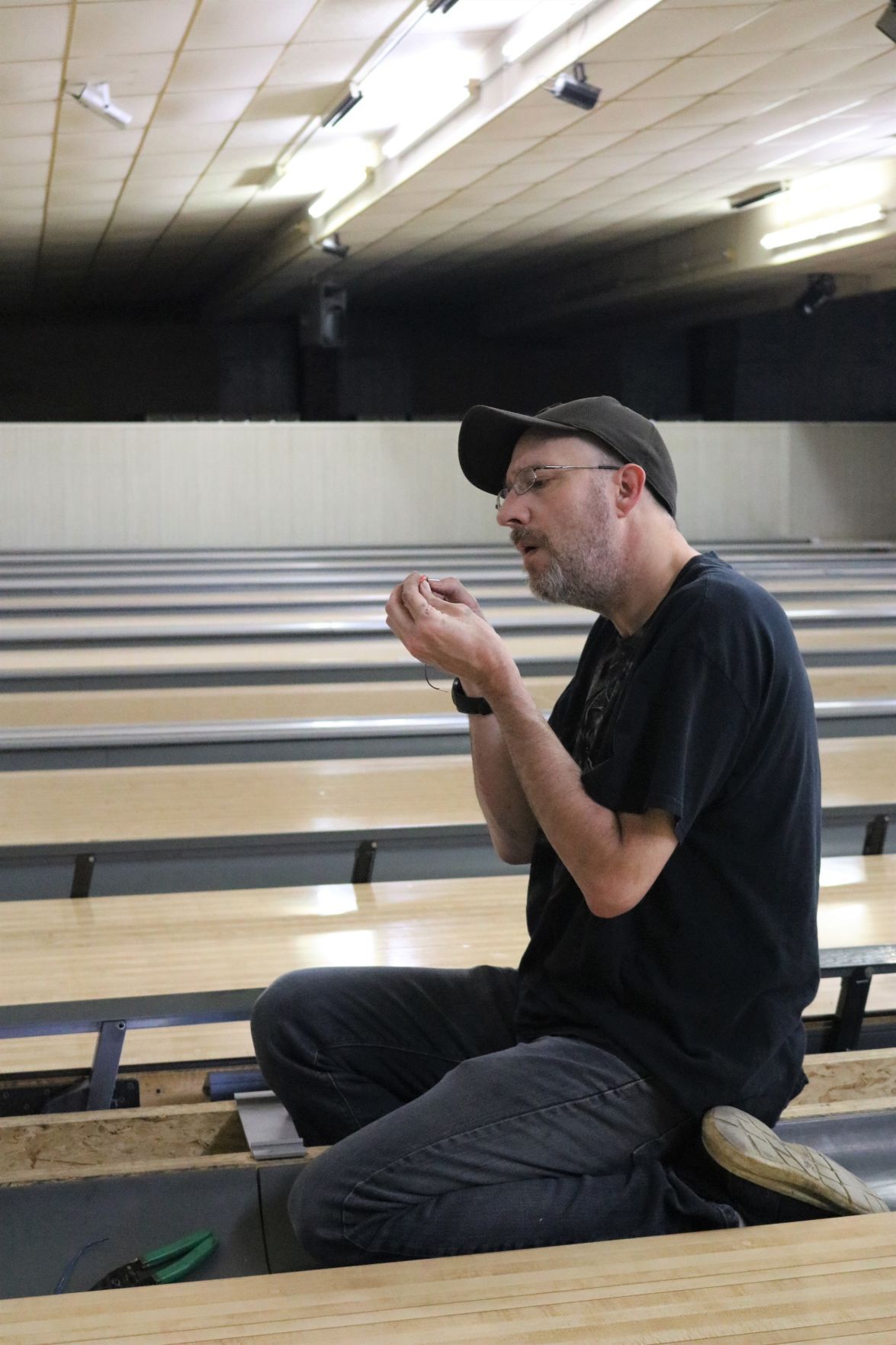 It is no longer officially the late Phil Torgerson’s business, yet it seemingly always will be. His wife and son, Ruth Ann and Shawn, have kept the local bowling alley, dance bar/lounge, and gathering place thriving through the COVID-19 pandemic that saw him leave too soon.

Phil passed away in November 2020.

The ownership change bestows on Shawn the same owner/operator title as his mother. The 1989 Forest City High School graduate and then Waldorf College graduate returned to the area in the mid-1990s working at Larson Manufacturing in Lake Mills and helping with the bowling alley part-time on weekends and, at times, during the week.

He said decided to forego promotion opportunities at the Lake Mills company in 1998 to work full-time at the Super Bowl.

“I realized I wanted to be back here,” Shawn said. “It has been the three of us since then.”

“For sure, it was a great move to have him back,” Ruth Ann said. “When it came to doing everything, it was basically just family. It’s your life. Generally, one of us is always here.”

She noted that her three daughters have done their fair share of helping with the business over the years as well. Daughter Shannon Swearingen still lives in Forest City, and the other daughters live in Minnesota – Cherie Ewald in Lakeville and Holly Smith in Farmington.

With Phil not there to help now, a couple of Super Bowl employees who are mechanically minded – Mike Johnson and Josh McClement - have stepped up to help fill the void. The two employees have been with the business for a combined total of more than 20 years.

“I really like the family, the people here, and the people who come in to bowl,” Johnson said. “It’s not like a factory where you stand in one place all the time.”

It all started back in the fall of 1971 when the bowling alley was built and opened by the ownership group of Jack Soderling, Ray Wilson and Wayne Arey, operating under the name of Winnebago Recreation Center. Phil had started working there part-time as a bartender. In April 1974, the majority owner (Soderling) asked Phil to manage the business.

Phil and Ruth Ann bought the bowling alley in 1982, renamed it, and made many changes through the years.

“Dad was always about getting the biggest and best, always ahead of the game,” Shawn said, citing a myriad of things including a disc jockey booth and dancing in the bar/lounge, cosmic bowling, and low-maintenance GSX pin setters with automatic scoring. His mother totally agreed, noting that most maintenance of lanes for bowlers is now done from the front desk.

“That was the biggest and best turnover,” Ruth Ann said of the latest pin setters, installed in 2016. “I’m glad Phil got to see it.”

It was in 2016 that the Super Bowl got the pin setters, which are much easier on the pins. That upgrade resulted from one of Phil’s many personal contacts in the bowling industry. Removed from another bowling center without much wear, they were purchased at half price from a Jayhawk bowling supply company contact in Lawrence, Kansas.

“Ours were 50 years old and this has about one-fourth the parts, less mechanics and moving parts, gears, and grease,” Shawn said.

Around the same time, the bowling alley acquired an IKON lane machine. It is cordless and cleans, vacuums, and oils the lanes.

“We’d go out to trade shows and conventions and bring ideas back from different vendors,” Shawn said. “That’s where you exchange a lot of ideas of things to try and things that work.”

One thing that worked was Phil’s ball drilling expertise, enabling especially high-end bowlers from over a larger area to have finger holes crafted to precision standards.

“There are not a lot of people that drill balls now,” Shawn said. “It’s half science, half art. Dad started doing it here in about the early 1990s, taking over for a guy who did it in Mason City. You probably would have to go as far as Waterloo or Des Moines or Mankato now.”

But of course, Shawn learned the art of drilling bowling balls himself, much of it from his father, and performs the service at the Super Bowl.

Consistent with the family decision-making for the Super Bowl, Phil and Ruth Ann and Shawn jointly chose to invest in a new Skytrak golf simulator that is operated via computer. It enables golf enthusiasts to tee off with real golf balls full tilt into a screen displaying many famous and real golf courses as well as some fantasy courses.

The computer program accurately measures trajectory, spin, speed of the hit balls. Around for many years in more primitive and expensive form, the technology improved and cost dropped enough that the investment was made. Word and excitement about the golf simulator spread on social media and by word-of-mouth.

“Golf got big everywhere last summer because there wasn’t a lot else to do (during COVID-19),” Shawn said. “People were all excited and in to this, so I thought why not. It was easier than getting people in a bowling league. Dad and I ordered within a week after we all talked. It arrived while he was in the hospital. Within a week, there were 23 two-person teams signed up to do it.”

All the use over 17 weeks and two prime time leagues battered the cloth material between the metal frame and screen, so Shawn had to rebuild it with wood inside the steel frame rather than just fabric. He is just waiting until padding arrives to complete the update, but leagues don’t start again until October.

A lifelong musician and music lover, Phil added the DJ booth to the ‘Sh-Booms’ lounge shortly after 1990 was ushered in just as the line dancing era was taking hold. It was also the height of the dancing lounge’s popularity, Ruth Ann said.

“It was a busy bar into the 2000s,” she said. “Phil said he would never do Karaoke. Boy, did he eat his words. He was always looking for the best new thing. The time came when we added Karaoke. It was big but not as big as dancing had been at one time. Social media changed everything.”

Shawn interjected, saying “people didn’t have to come out here to know what’s going on anymore, so while we get bigger groups because of social media, people used to come here to find and connect with people.”

Cosmic bowling took hold and has endured, allowing people to let loose and enjoy tunes on a souped-up sound system, enjoy some videos on a large projector screen that drops down by the wall of pins, and bowl amidst a light-show array of colors.

As Shawn approached the Super Bowl sign in the parking lot for a photo, he said “one thing that’s hard since all of this is that everything around here is his; he’s a partner in all of this.”

Then, he noted that for about 15 years, he and his father were in a group of 10 people on two teams going to United States Bowling Congress nationals.

“He usually organized it all and it was hard going last month without him there," he said.

Phil passed away on Nov. 1, 2020, at Mayo-St. Mary’s Hospital in Rochester, Minnesota. Many memorials were designated to the COVID-19 Research Fund at Mayo Clinic at the family’s request.

His love of music also led him to be a DJ at countless wedding receptions and he continued to play music from the DJ booth at the Super Bowl through his lifetime. He formed several bands that played in ballrooms and event centers.

“Phil was here for about 50 years.” Ruth Ann said. “People who didn’t know his name knew him as the bowling guy, because he was always here. You generally touch a lot of lives when you are helping with wedding dances, birthday parties, and bowling tournaments."

The mother and son owners and operators of the Super Bowl said they have appreciated the genuine support of so many people in area communities. Also, from everyone they know in the industry as the Super Bowl saga continues.

Son Shawn and father Phil Torgerson some years back at the Super Bowl in Forest City.

Many things have changed at the Super Bowl in Forest City in recent years and through COVID-19, but the sign out front and Shawn and Ruth Ann Torgerson have endured.

Owners Ruth Ann and Shawn Torgerson are shown working behind the front desk at the Super Bowl in Forest City on June 9.

Shawn Torgerson sets the golf simulation from a computer at the Super Bowl while his mother, Ruth Ann Torgerson, watches the video screen on the bowling alley's latest attraction.

Shawn Torgerson takes a golf swing at the Super Bowl.

Mike Johnson was found fixing foul lights on a bowling lane at the Super Bowl on June 9.