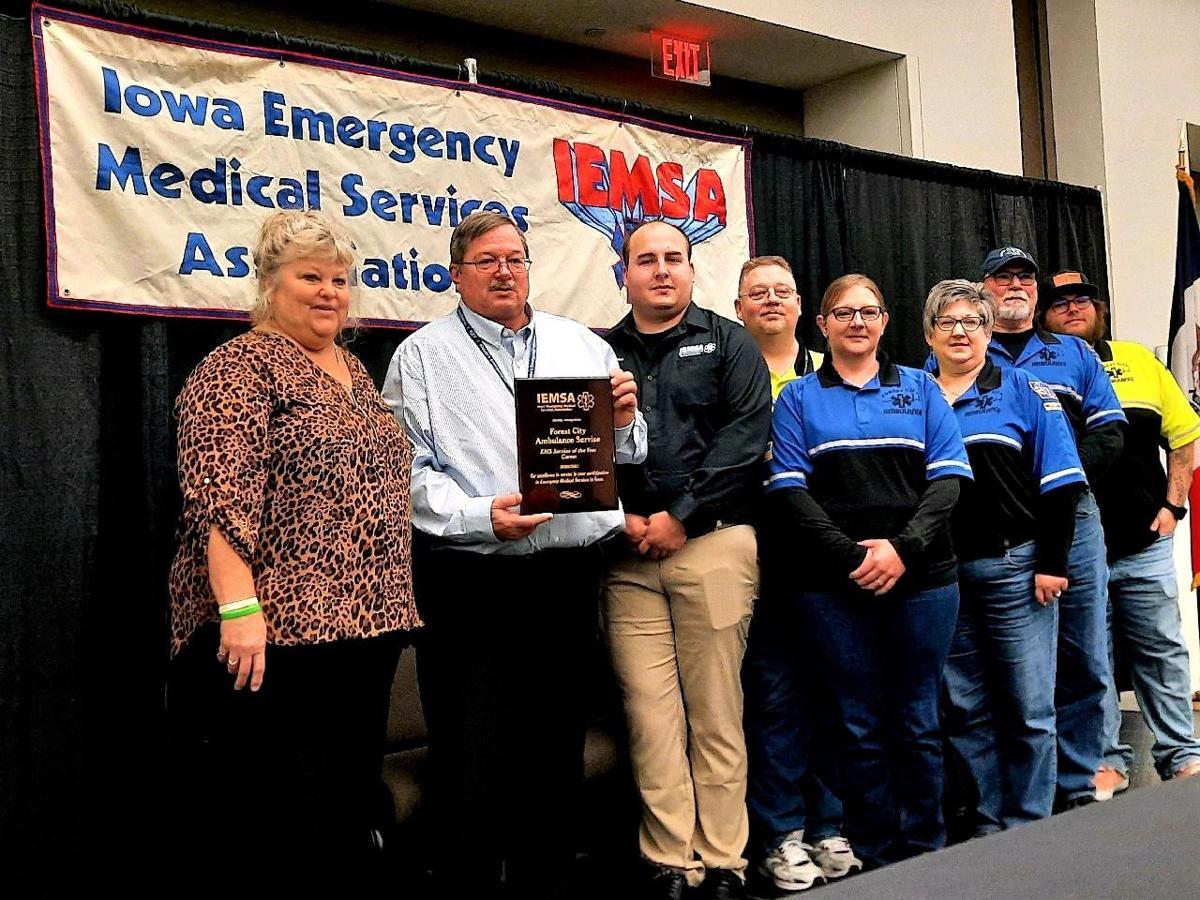 A group photo was taken at the IEMSA awards ceremony in Des Moines on Nov. 13 where the Forest City Ambulance Service received the 2020/2021 EMS service of the year award. From left are Nancy Helm, who authored a nomination letter to the IEMSA after a Jan. 1, 2019, head-on crash EMS response near her residence, and members of the Forest City Ambulance Service Dale Rayhons, Spencer Armstrong, Jon Cahoon, Jessica Cahoon, DeAnn Derscheid-Hanna, Doug Hanna, and Lee Dutcher. 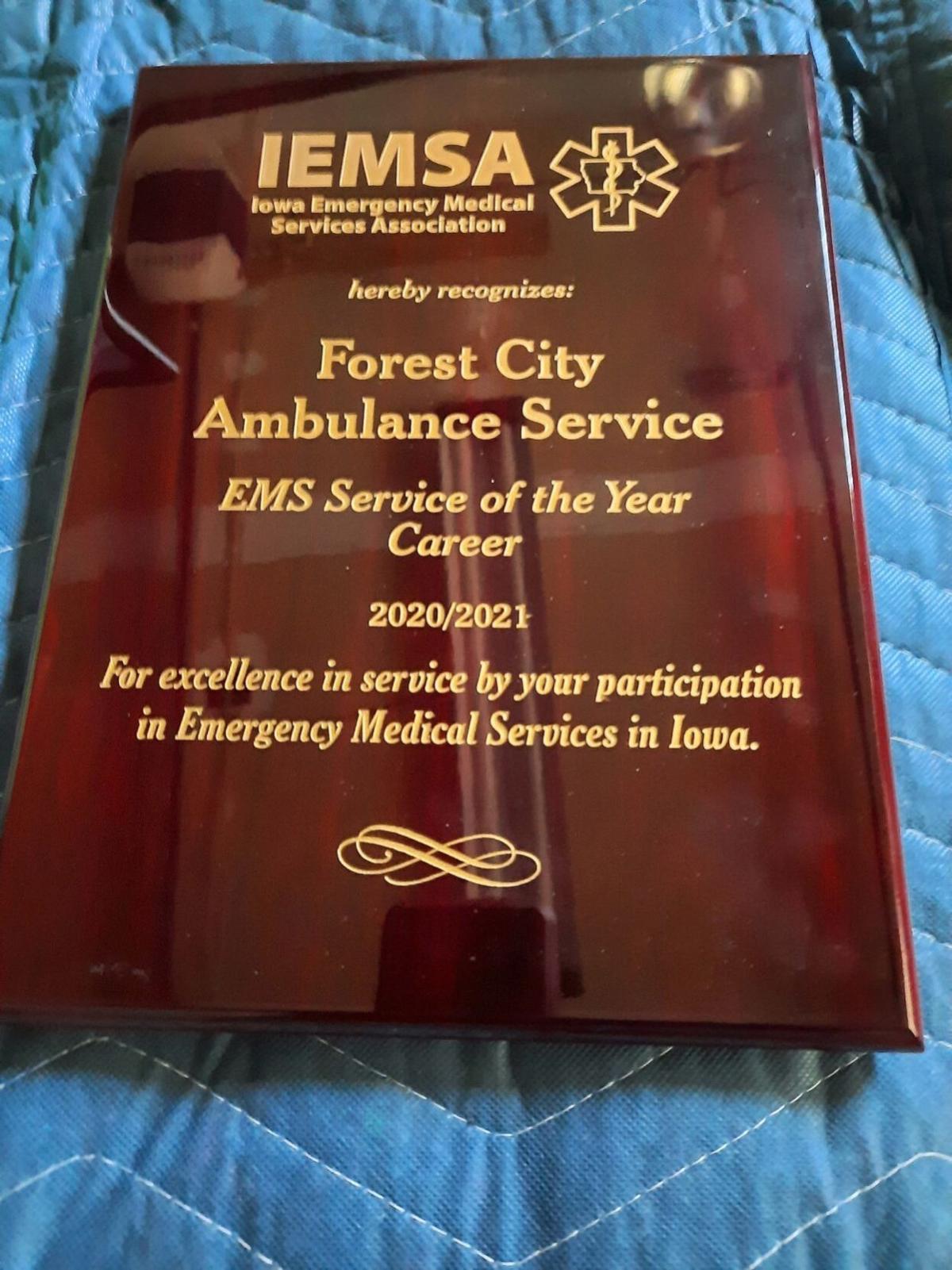 The award for service excellence was announced privately on Oct. 26. It was presented to Forest City ambulance workers at a Nov. 13 IEMSA awards ceremony held in Des Moines, with about a dozen of them attending.

“This was in remembrance of the incident that happened on Jan. 1, 2019,” Forest City’s interim paramedic supervisor Cindi Wachholz said at the Nov. 15 city council meeting. “It was less than 13 degrees outside. There was a two-car, head-on collision and gravel road in Winnebago County….”

Tearing up, she continued, “Ten kids were involved in that accident. Ten kids were taken to the hospital. All 10 kids are alive today. That is fantastic. That just goes to show you when communities come together, what volunteers and employed paramedics can do to care for our community.”

“I have spent my entire 23-year paramedic career helping the wonderful people of our community and feel that all the sleepless nights and missed holidays are worth every second when you know you have, hopefully, made a difference and gave a family or loved one a second chance,” said Forest City paramedic supervisor Dale Rayhons in an email to IESA officials upon award nomination. “The January 1, 2019, call will forever be in my mind – wind chills of minus 14, 10 critical patients in two vehicles, five different communities involved, two air flights and, by the grace of God, not one life lost. I was proud of everyone who assisted and trusted in me to lead them that night.”

In addition to Forest City, the West Hancock, Garner, Titonka, and Buffalo Center ambulance services all responded to that eventful call.

“Nancy and Steve Helm started this locally with letters,” said Forest City Mayor Barney Ruiter. “The Helm family contacted me almost two years ago now. It was nice to see that happen. It says a lot about the community and workers that we have as paramedics. The ambulance and police and fire all got involved in that thing. For nobody to die from those injuries was nothing short of a miracle. Their help made this happen. It was pretty impressive.”

“Everybody on that call was fantastic. She (Nancy Helm) sent a wonderful letter out,” Wachholz said. “I’m very proud to be a part of the service that contributes to the community like that.”

The content of the nomination letter as submitted by Nancy Helm, as a private citizen of Forest City, reads:

I am a rural resident in Winnebago County. This past New Years’ Eve there was a terrible head-on crash on our gravel road. Ten you adults in two cars. All injured. The Forest City sheriff department and EMTs did a superior job on saving lives. I think they should all be recognized for a job well done.

There were EMTs and ambulances from all the surrounding towns. They all worked together. I do believe Forest City’s EMTs took the lead, but many made it happen. Kids were taken to Britt (Iowa) hospital, Mason City (Iowa) hospital, Iowa City and Rochester, Minnesota. Some were life flighted, but needed to be transferred to a safe landing area.

In the dark of the night, a miracle happened!! When they left the crash site, all were alive. Between all the blood and not knowing for sure how many kids there were – finally they felt some relief.

If I had to guess, many of the emergency people couldn’t get the images out of their heads for quite some time. I feel like all the people that night need a pat on the back for all they did. I know if I was a parent of one of those kids, I would want them to be thanked.

Please consider everyone for efforts of the NEW YEAR’S EVE 2019 CRASH IN WINNEBAGO COUNTY.

After receiving the award, Rayhons said there is no better way to head into retirement after about 28 years as part of the service and 25 years as the longest-running paramedic in Forest City.

Battling long-haul COVID-19 symptoms, he has been on medical leave and is targeting a Jan. 8 retirement from his paramedic supervisor position.

“We’re very honored,” Rayhons said. “The whole service is proud as can be. Small-town communities rely on these unsung heroes in our communities. Many are so short-handed and it is hard to know what rural EMS might look like in a few years.”

Hardships in the time since the accident has made the recognition sweeter.

“We heard we were nominated for 2019 and COVID delayed everything,” Rayhons said. “This puts a smile on everyone’s face. It’s an honor for this service, but it was a coordinated effort with many others that worked with us.”

Of that night, Rayhons said, “We were freezing out there, yet the adrenaline was pumping. We were cautiously optimistic because everyone was alive when we left. It’s just jubilation getting this honor bestowed upon us. It is just fantastic. It’s also a nice way to end my career.”

A group photo was taken at the IEMSA awards ceremony in Des Moines on Nov. 13 where the Forest City Ambulance Service received the 2020/2021 EMS service of the year award. From left are Nancy Helm, who authored a nomination letter to the IEMSA after a Jan. 1, 2019, head-on crash EMS response near her residence, and members of the Forest City Ambulance Service Dale Rayhons, Spencer Armstrong, Jon Cahoon, Jessica Cahoon, DeAnn Derscheid-Hanna, Doug Hanna, and Lee Dutcher.