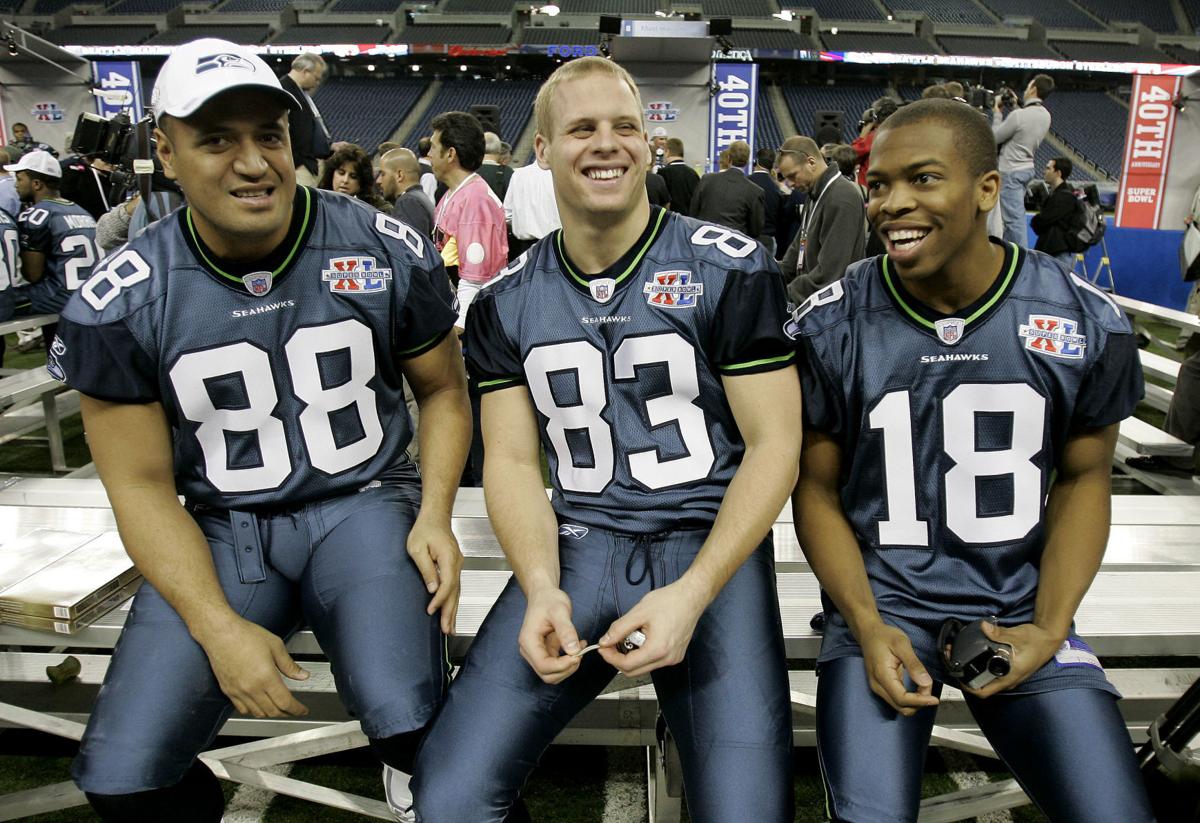 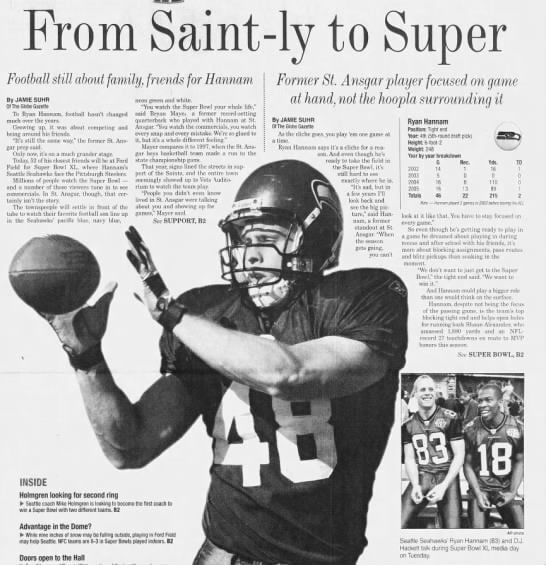 Hannam (48), on the cover of the Globe Gazette sports page from the day of Super Bowl XL. Hannam caught two passes for 12 yards in the Seahawks loss to the Pittsburgh Steelers. 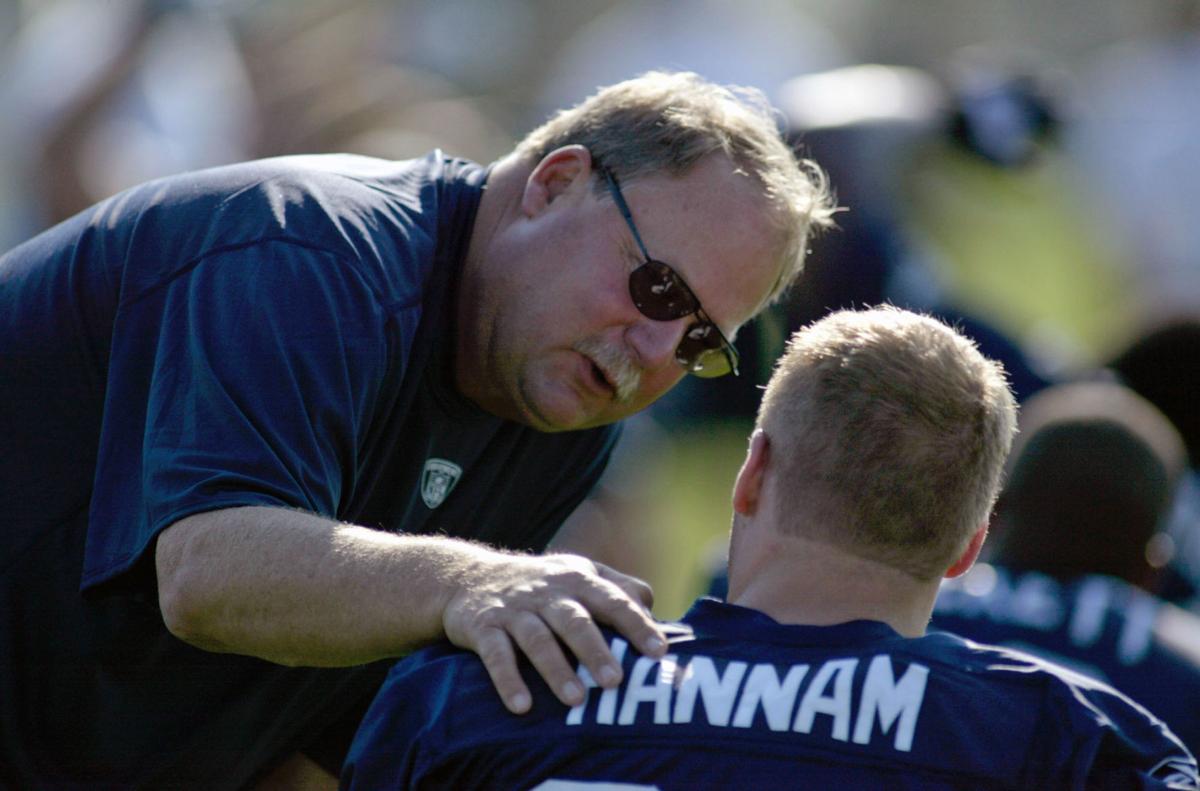 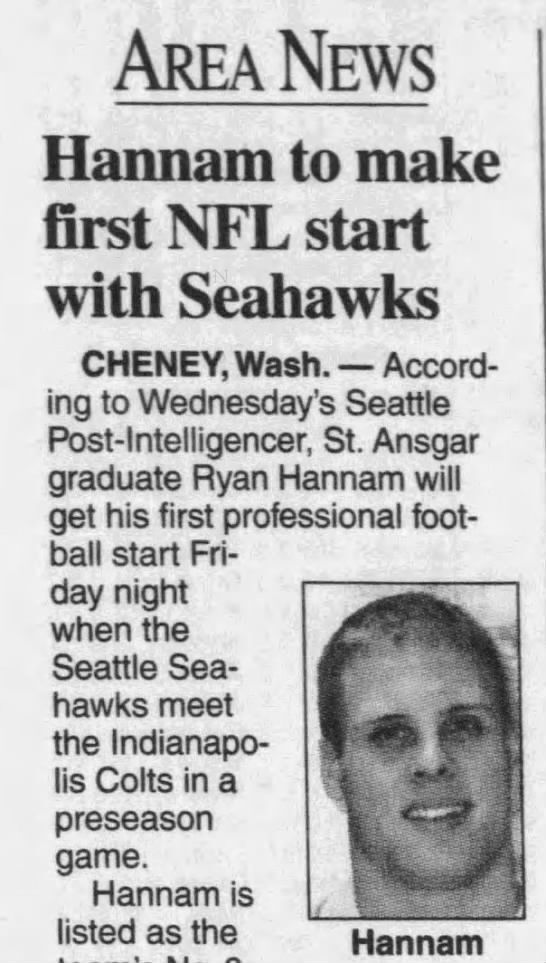 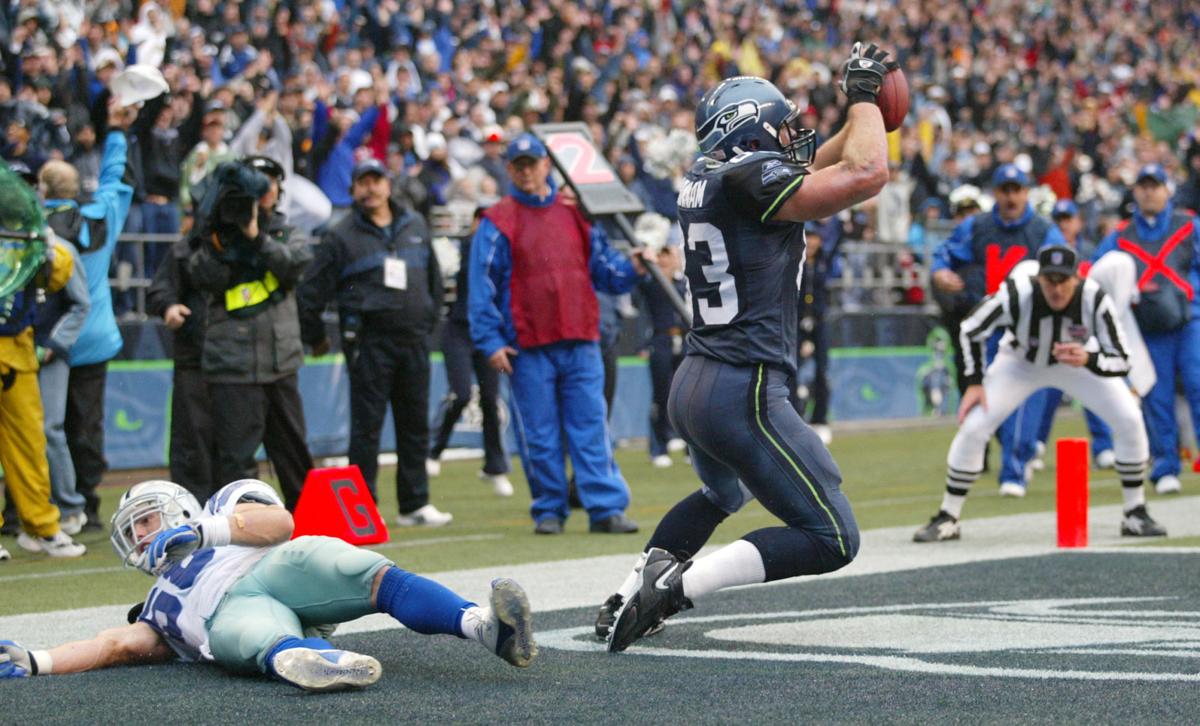 The Seattle Seahawks' Ryan Hannam comes up with the ball after catching a 1-yard touchdown pass in the fourth quarter as the Dallas Cowboys' Scott Shanle liess on the ground on Oct. 23, 2005, in Seattle. 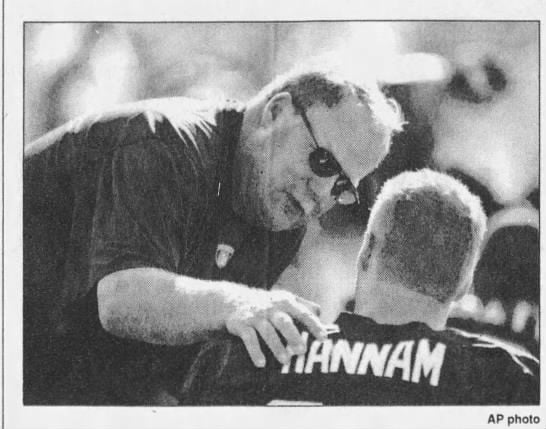 Ryan Hannam has played football on the biggest stage, but got his start in St. Ansgar, far from the bright lights of the National Football League.

Hannam, who graduated in 1998 as the Saints' career receiving leader, and the first player in program history to rush for over 1,000 yards in a season, accomplished every small-town football player’s dream, after going on to play for five seasons in the NFL.

Now, he will receive the state’s highest honor in high school football when he is inducted as a member of the 2020 class of the Iowa High School Athletic Association Football Hall of Fame.

The ceremony was originally supposed to occur on Friday during halftime of the Class 4A state title game, but has been pushed back to next year due to COVID-19 attendance restrictions.

But once next year comes, Hannam will enter the IHSAA’s hallowed halls, along with four other legendary Iowa athletes – Mike Klinkenborg of Central Lyon, Jeff Koeppel of Urbandale, Darin Naatjes of West Lyon, and Kevin Sanger of Britt.

For Hannam, the honor was unexpected, but much appreciated. He has been swamped with calls, texts and social media messages over the past few days, congratulating him on his accomplishment.

“People are excited because they think it's not just a reflection on any individual, but also some recognition for the town and the school as well,” Hannam said. “I’ve been getting a lot of messages and calls and texts saying congratulations. It’s fun to hear from some people that I haven’t heard from in awhile and that were a big part of my life back in the days where I was a St. Ansgar Saint.”

After he left St. Ansgar, Hannam went onto the University of Northern Iowa, where he was a four-year letter winner and a second team All-Conference selection his senior year. He was drafted by the Seattle Seahawks in the fifth round of the 2002 NFL Draft, and played for the team for four seasons as a tight end.

The highlight of Hannam’s career came in early 2006, when he had two receptions for 12 yards in Super Bowl 40, which the Seahawks lost to the Pittsburgh Steelers, 21-10.

“There are those few moments that stand out as special moments,” Hannam said. “Being out there on the field in the Super Bowl, I definitely had that moment of a 'This is really happening right now’ type of thought going through your head. As much as you try to focus and remind yourself it's a game, and play it like you do any other game, when it's something you’ve been dreaming about your whole life, it's a pretty awesome experience.”

In 2007, Hannam signed with the Dallas Cowboys. He appeared in two games, and retired after that season.

He still keeps in touch with the St. Ansgar program, and head coach Drew Clevenger makes sure to keep him and a lot of the other Saints’ alums apprised on the team’s happenings.

For St. Ansgar, a town of just over 1,100 people, Hannam is the second athlete to be inducted into the IHSAA Football Hall of Fame. Matt Sherman, a 1993 graduate who went on to play at the University of Iowa, is the other.

Clevenger, who was hired in as the program’s head coach in 2000, says that Hannam’s story is an inspirational one for every small-town football player. Hannam battled injuries his senior year, but still went on to succeed in Division I football, and eventually the pros.

“You have to credit UNI for seeing something in him that maybe a lot of people missed,” Clevenger said. “When he got to UNI, he had a very successful career, and went on to be a fifth-round draft pick and played five years in the NFL. It’s quite a remarkable story, and one that a lot of people don’t think about. It happens from small towns and places like St. Ansgar. Certainly, it’s a credit to Ryan, and his ability, character and determination.”

Now, more than two decades removed from high school and 13 years since he last put on the pads in the NFL, Hannam will be enshrined for all time as an Iowa high school football great. He has fond memories of UNI and of his time with the Seahawks, certainly, but the memories of his high school days are some of the most precious.

“Looking back on it, you realize what a great time it was, just to be out playing sports you love with your friends,” Hannam said. “There is something very pure and innocent about high school athletics. Those are the memories you take with you for the rest of your life.”

The Mason City Mohawks hockey team is shutting down for at least the next three weeks, following new restrictions on sports activities announc…

Hannam (48), on the cover of the Globe Gazette sports page from the day of Super Bowl XL. Hannam caught two passes for 12 yards in the Seahawks loss to the Pittsburgh Steelers.

The Seattle Seahawks' Ryan Hannam comes up with the ball after catching a 1-yard touchdown pass in the fourth quarter as the Dallas Cowboys' Scott Shanle liess on the ground on Oct. 23, 2005, in Seattle.