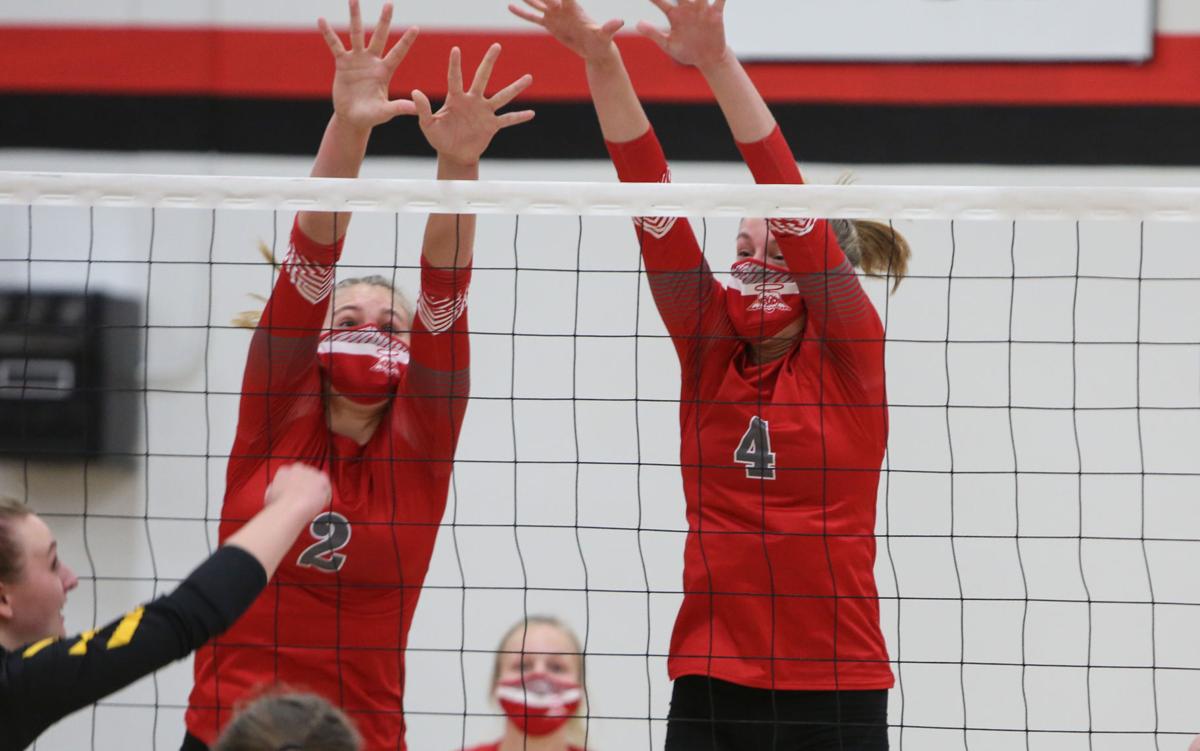 Madison Hillman (#2) and Gracie Urbatsch block against Wapsie Valley at the regional finals game in Nashua on Wednesday. 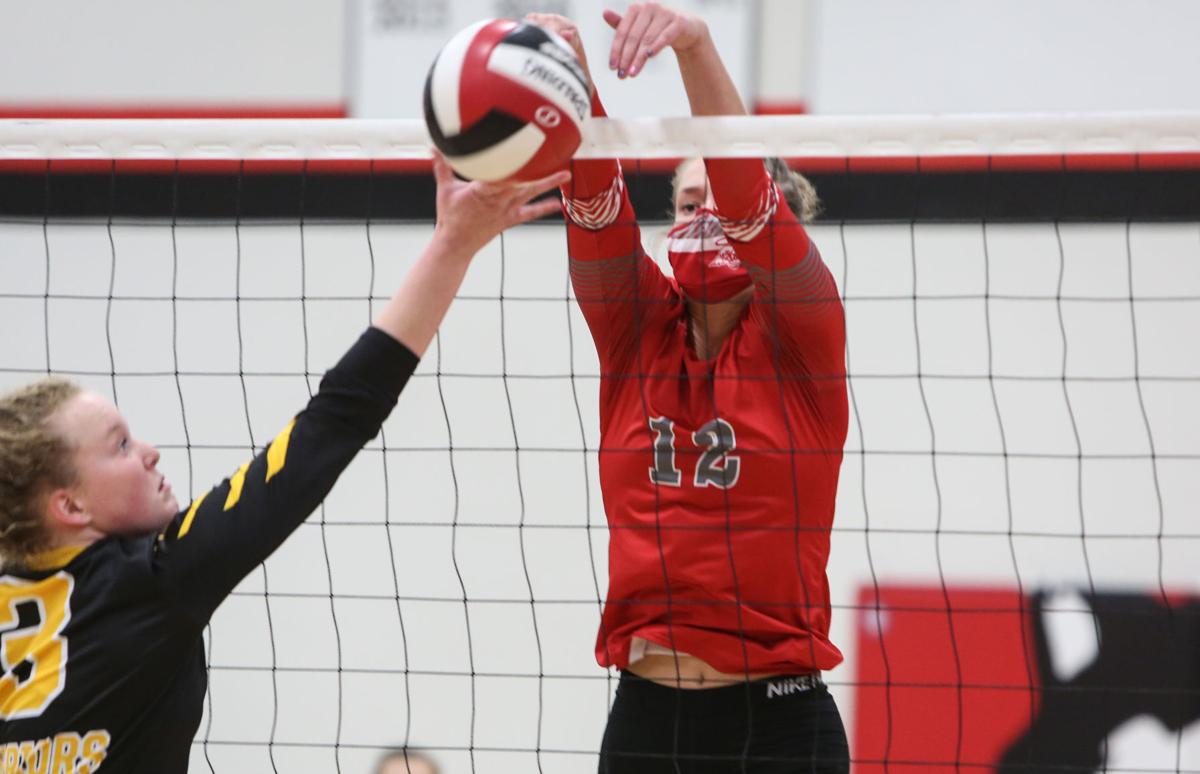 Brooklyn Hackbart tips the ball over the net at the regional finals game against Wapsie Valley on Wednesday in Nashua.

For the St. Ansgar volleyball team, the end of the road in 2020 came on Wednesday night at Nashua-Plainfield High School, as the Saints lost in the Class 1A, Region 6 finals to No. 2 ranked Wapsie Valley, 3-0.

The loss meant the end of the Saints' 17-game winning streak, and a season in which the program made it to the regional finals for the first time since 2000. For coach Tyler Johnson and the team’s seven-member senior class, the loss was a tough way to finish off a strong season.

But according to Johnson, the team still has a lot to be proud of, both on the volleyball court and in other athletic endeavors.

The senior class, led by Brooklyn Hackbart, Blayne Koster, Hali Anderson and Gracie Urbatsch, took the team to the cusp of its first state tournament in 32 years, has gotten the softball team to state each of the past five years, and secured a state tournament spot in girls basketball for the first time since 2001.

That is a lot of history for one class.

“We’re proud of the fact that this senior group has two regional finals in softball, one in volleyball now, and a state basketball tournament,” Johnson said. “That is something that is pretty rare. They should cherish that, because they earned it.’

Against the Warriors on Wednesday, the Saints couldn’t get their offense into a rhythm and struggled on defense against Wapsie Valley’s big hitters. Warriors’ junior Lydia Imbrogno had a team-high 12 kills. On defense, the Warriors finished with 44 digs and eight blocks.

On offense, the Saints finished with an offensive efficiency mark of .068 and were led on offense by senior Blayne Koster, who had seven kills. After a strong start where the Saints got out to a 12-8 lead, the Warriors dominated, winning set one 25-15, set two 25-16, and finishing the game off with a 25-14 win in set three.

Johnson knew that the No. 2-ranked team in the state was going to be tough. The Warriors play in the North Iowa Cedar East, a conference that sent five teams to the state tournament, and face top competition all season long, and St. Ansgar’s season ending schedule may not have prepared them for a battle-hardened team like Wapsie Valley.

“To be honest with you, we ended our season playing a lot of teams down the stretch that had losing records, and the hard part is that that doesn’t prepare you for suddenly playing teams that are kind of battle hardened the way they are going to be,” Johnson said. “We’ve just got to get used to that. Once we get to the regional final, everyone is going to be good, so you’re going to have to step up and play.”

Although the team will lose a significant chunk of its starting lineup to graduation, the Saints’ program is in a good place going forward.

The Saints have most of their back row returning, and have juniors and sophomores will plenty of varsity experience that should be ready to fill the holes left by the seniors’ departures. With a St. Ansgar sports program that encourages athletes to play sports all year round, Johnson thinks that the team should have no trouble maintaining success in the future.

“They have bought into that culture,” Johnson said. “Even our football coaches that do the summer stuff with them in the weight room kind of help push a lot of that culture. All it can do is help that slow build. Then you can get classes like this that can kind of come through and take you on a fun little ride.”

After the loss to Wapsie Valley, the team stood hugging their family members on the court at Nashua-Plainfield High School. Though their volleyball season is now over, there is still plenty of time for this group to play together. They still have a basketball season to play.

They’ve already made history. Who knows? With basketball season coming up, maybe they can do it again before the year is over.

“As a senior, it’s really cool that we left our mark and got to where we were,” Hackbart said. “A lot of good players have come through and not been able to do that. It always hurts to lose, when you are so close, but I think we did a good job.”

The Saints finished the season 22-5 overall. Wapsie Valley will play Burlington Notre Dame on Tuesday at 5:30 p.m. in the first round of the state tournament.

Whenever Charles City cross country runner Kiki Connell competes this season, she doesn't run alone, despite her usual position far ahead of t…

For close to 30 years, the Riceville building and grounds committee have had a vision to build a new activity center for the community and school district.

Madison Hillman (#2) and Gracie Urbatsch block against Wapsie Valley at the regional finals game in Nashua on Wednesday.

Brooklyn Hackbart tips the ball over the net at the regional finals game against Wapsie Valley on Wednesday in Nashua.