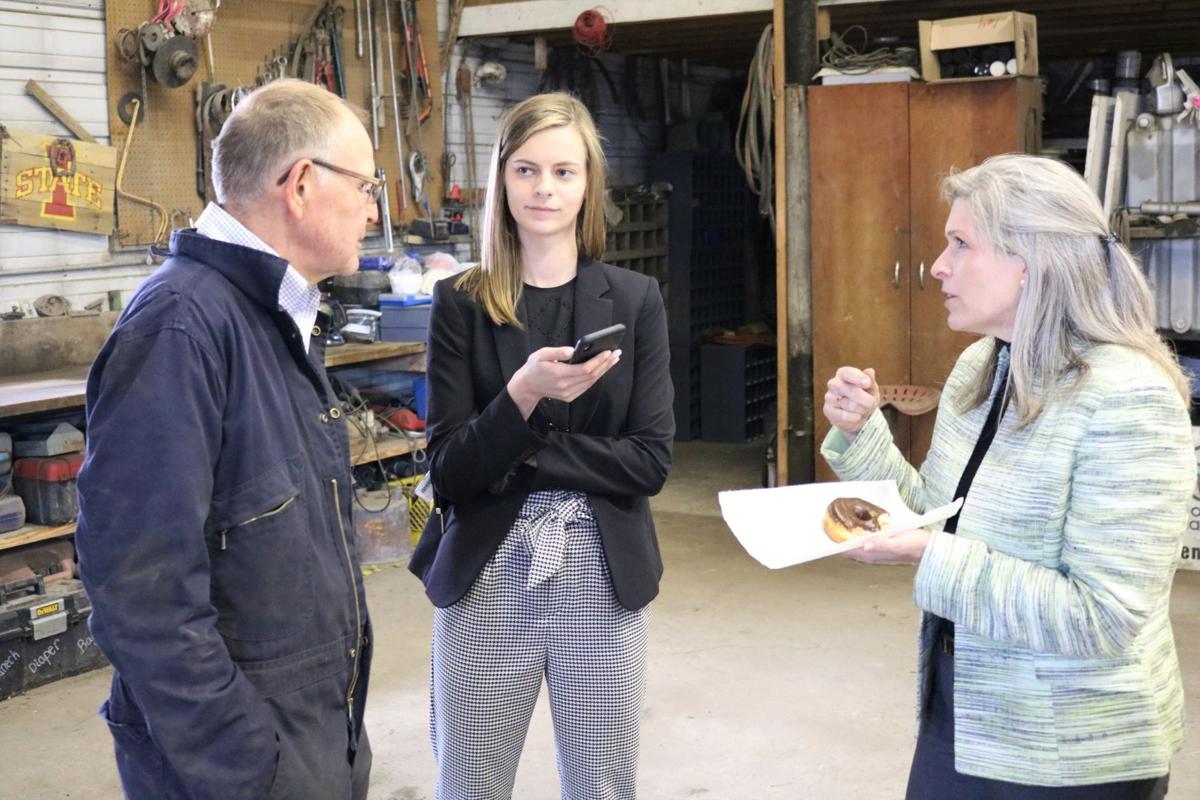 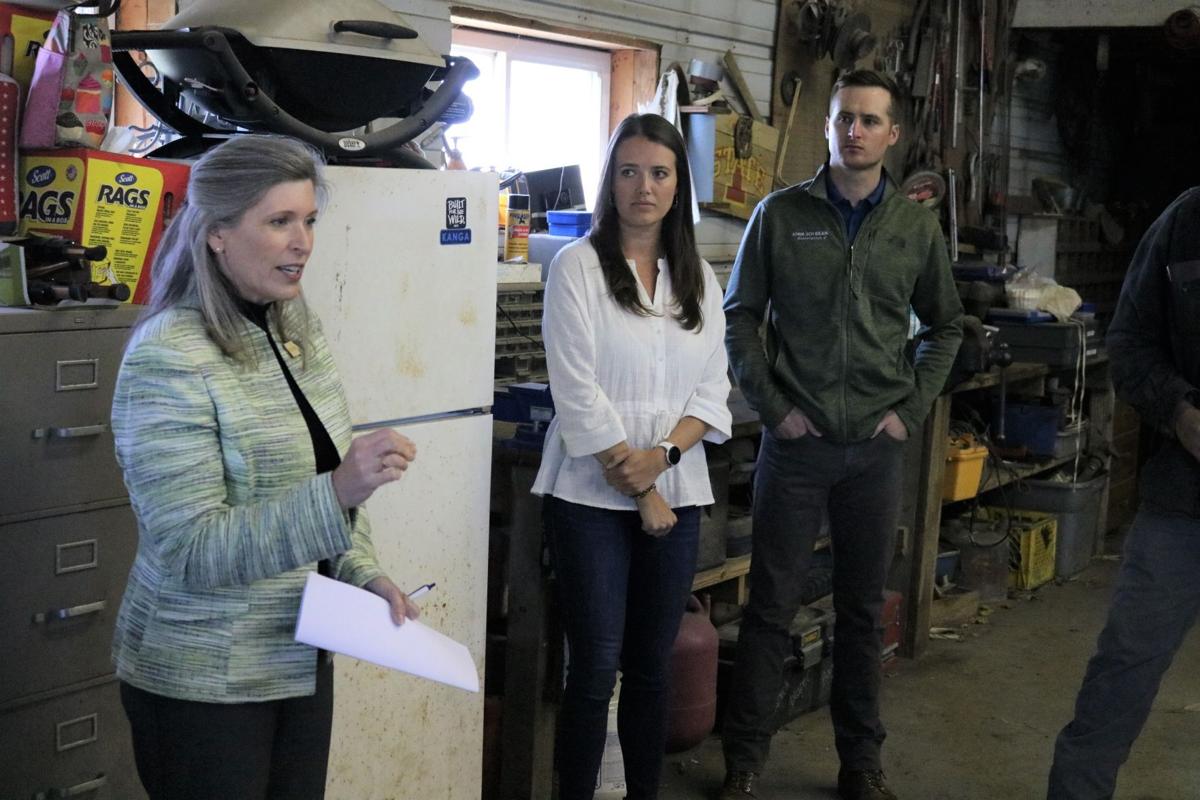 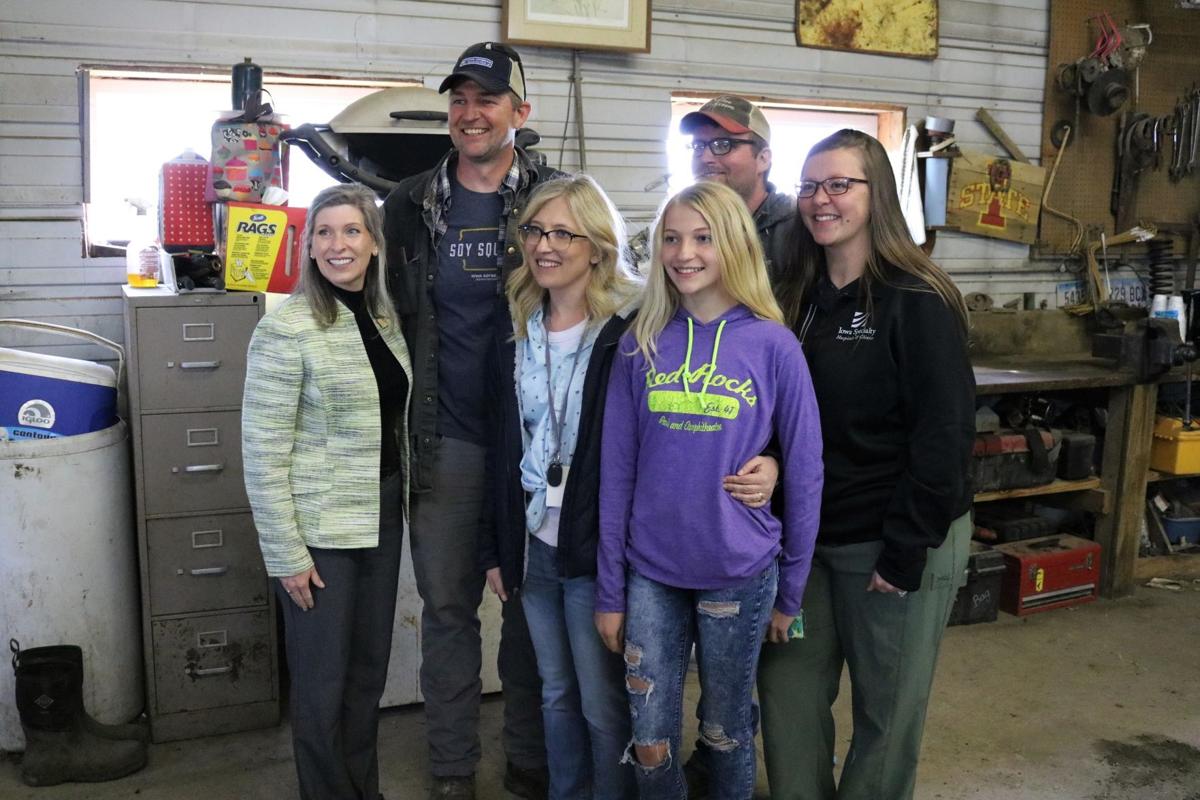 Sen. Joni Ernst with the Renner family in their farm workshop on May 4 in Hancock County. 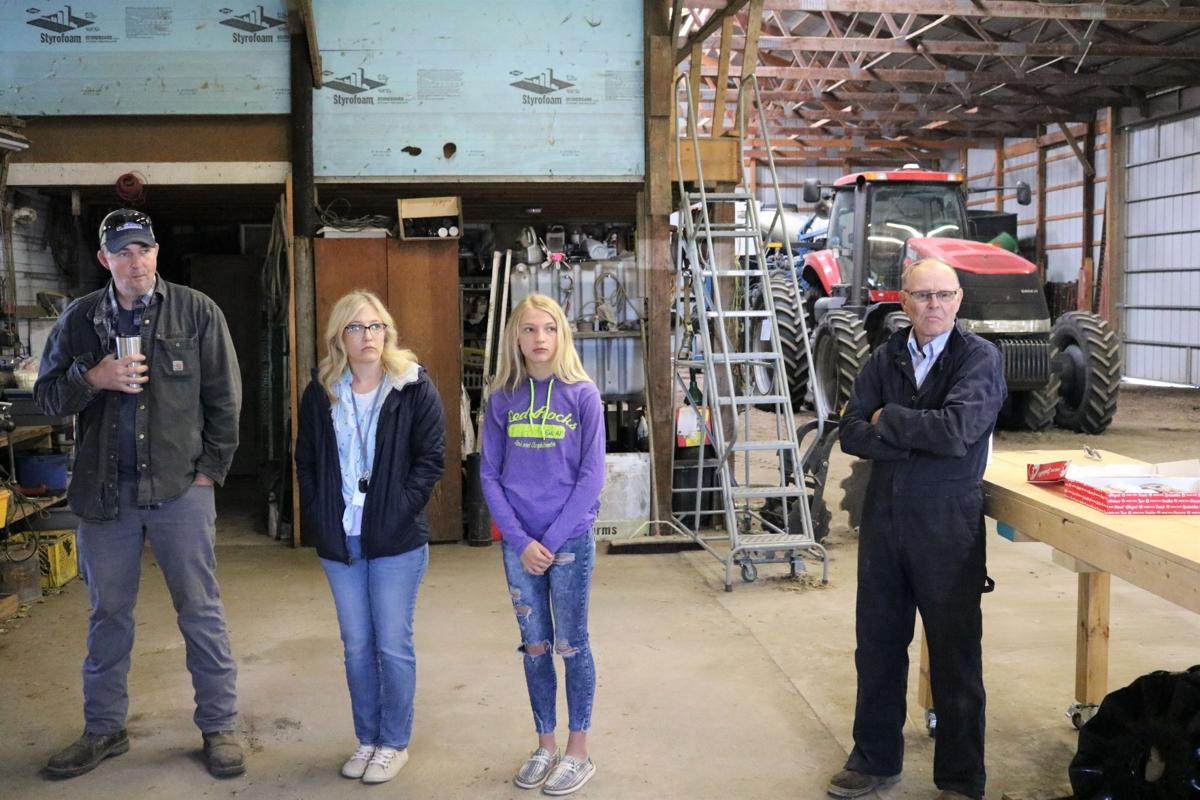 The Renner family, flanked by Brent Renner, left, and Tom Renner, right, received a visit to their farm from Sen. Joni Ernst on May 4. 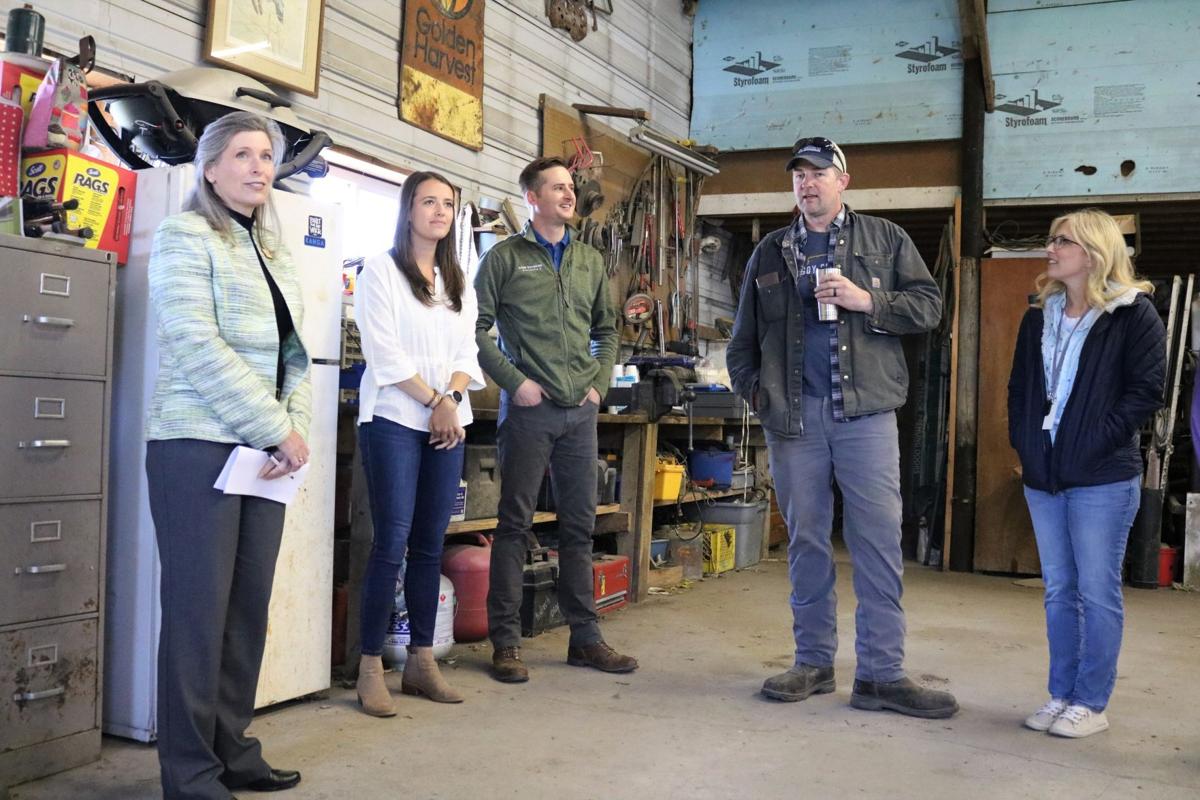 Sen. Joni Ernst leads a coffee discussion at Renner Family Farm near Klemme on May 4.

U.S. Sen. Joni Ernst, R-Iowa, shared concerns about the stark contrast in agricultural policies under President Joe Biden compared with the previous administration as she visited with a small group of Hancock County farmers at the Renner family farm near Klemme on May 4.

Ernst cited efforts to move up to 30% of farmland into the Conservation Reserve Program acres by 2030.

“This is an issue where CRP originally was intended for vulnerable acres, and now people are retiring and putting all their land into it,” Ernst said. “Yes, it is good, but we should not let too much productive land sit. Thirty percent of our land is twice the size of Texas across the United States. I don’t even know how you achieve that.”

Ernst said while participation in the program is voluntary, it could expand similarly to the Waters of the United States environmental rules, leaving some unable to farm up to 50% of their land. She said the government should not expand control over farmland by passing rules via agencies, especially when so many issues are not codified.

Brent Renner has been heading the farm operation since his father, Tom Renner, retired in December. He asked how the new administration and the Democratic Party plan to achieve goals Biden raised in his recent presidential address to Congress and how they plan to pay for everything.

Ernst said it is their intent that government provide everything for individuals, including free child care, community college, and “whatever.” She said when government controls resources and industry, it is socialism. She lumped efforts to pack the courts and lower the eligibility age for Medicare, creeping closer to Medicare for all, into the same category.

“We’re trying to work as many initiatives as we can with as many people as we can because it is all about maintaining a balance,” said Ernst. She expressed frustration over drastically reduced access to the president and executive branch officials compared with the prior administration.

“With President Trump, I could engage him any time I wanted,” said Ernst. “He would get on his topics and he was driving the train, but he was always willing to work with us. Within an hour after meeting, I would usually get a call back from the president. Now, I don’t even get an opportunity, and I am referred to staff.”

Ernst said she has been unable to get direct access to Biden. Another concern is the push for electric vehicles and policies like the Green New Deal and the resulting impacts on renewable fuels.

“They’re not talking about biofuels,” said Ernst. She said she and Sen. Chuck Grassley, R-Iowa, have pressed administration officials on the topic. “I’m very concerned where we’ll be at with the biofuels industry in another 10 years or so.”

She cited requirements that new cars be electric in California in the next decade, noting minerals for electric vehicles are coming primarily from China. She said the batteries are not yet renewable, and human rights issues related to the mining industry and related emissions are being ignored.

“They’re not being realistic about the infrastructure they would need for their ‘utopia’ to happen,” said Brent Renner, who thanked Ernst for standing up for farmers.

But Ernst and the local farmers noted there are opportunities for bipartisan cooperation on issues such as cover crops and carbon sequestration to address soil health and climate change.

“It would be nice to be rewarded for those type of efforts,” said Brent Renner. “We were planting soybeans here on Saturday and we had 70 mile per hour winds. You could see the dust leaving those other farms, but our cover crops were fine.”

Renner said he is in the midst of a five-year transition to a full no-till operation on farms of about 1,800 to 2,000 acres.

“We’re trying to navigate the challenges with cover crops being this far north,” he said. “Germination can be a challenge.”

Some in attendance said they were encouraged by the use of cover crops across Iowa, which is increasing slowly but surely. They said more focus on waterways and buffer strips is warranted.

“It is for sure an honor to have her here,” said Tom Renner. “I’ve enjoyed seeing her work and have supported her politically.”

“We’ll give you a tractor ride next time,” Brent Renner told Ernst. “Let us know what we can do to help you fight."

He said he is glad Ernst is a self-proclaimed optimist because many policies coming out of Washington, D.C., recently are challenging his optimism.

“I do think we’ll see a shift back to the middle in the next election due to the radical switch in policy,” said Ernst, who maintained she and other Republicans would hold the line until then.

Sen. Joni Ernst with the Renner family in their farm workshop on May 4 in Hancock County.

The Renner family, flanked by Brent Renner, left, and Tom Renner, right, received a visit to their farm from Sen. Joni Ernst on May 4.

Sen. Joni Ernst leads a coffee discussion at Renner Family Farm near Klemme on May 4.