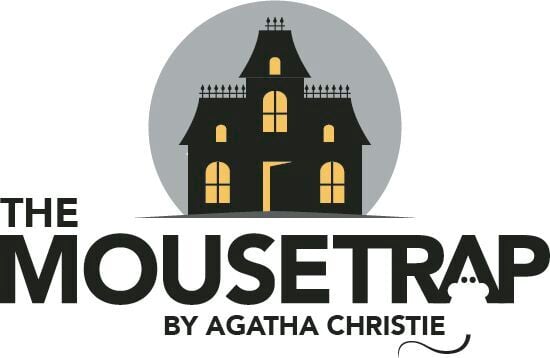 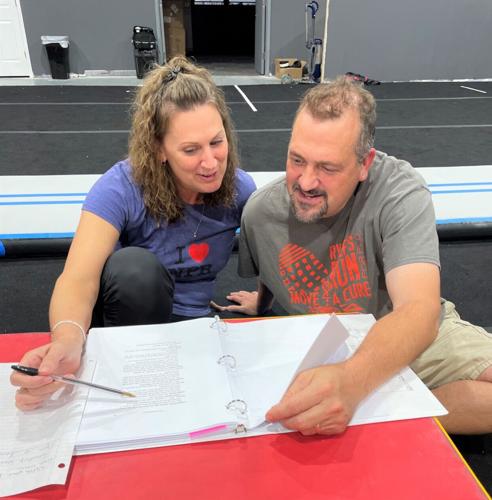 Daniel and Shandra Sarasio Meyer met during a theatre production at Augustana College in Sioux Falls. However, BrickStreet Theatre’s production of Agatha Christie’s The Mousetrap marks the first time the couple will work together as co-directors.

“It is great directing with Dan, as he is my favorite person to spend time with,” said Shandra, who was recently stage manager for BrickStreet’s It’s a Wonderful Life. “I’m thankful I can lean into his knowledge and directing experience, as I have a lot yet to learn.”

Dan has directed the spring play for Forest City High School the past 23 years. Now he and Shandra lead a cast of eight adults as they bring this classic whodunit to life.

“While adults have fewer scheduling conflicts and take greater responsibility memorizing lines, there are many similarities,” said Dan. “For instance, with both high school and community theatre, you have a mix of skill levels with everyone helping and learning from one another.”

The Mousetrap cast members come from five North Iowa communities and represent a range of experience from novice to seasoned performer.

“That’s what community theatre does especially well,” said Dan. “There’s a wealth of experience and wisdom mixed with the fresh energy of those newer to the stage. As a director, it’s a privilege to help it work together.”

Shandra notes that the melding together creates an excitement and synergy.

“Everyone gets invested,” she said. “They might not have known one another a few weeks ago, but now you see people pairing off when not on stage to run lines or staying after rehearsal to chat.”

The Sarasio Meyers have also brought in crew members new to BrickStreet.

“One of the things I hope happens with The Mousetrap is for audience members to see the show and think ‘I could do that. I could help make something like this happen one day,’” he said.

Shandra added that the intimate feeling of BrickStreet’s new space on Highway 69 South helps create that type of experience. The space is described as having a Blackbox feel.

“Audiences are so close to the action they are practically on stage already,” she said. “While BrickStreet shows have a professional atmosphere, their production and rehearsal processes are tailored to everyone who has a love of theatre.”

Both directors are fans of Agatha Christie. When presented with the opportunity to direct, they looked forward to bringing the author’s skilled storytelling to life.

“I’ve always enjoyed her masterful twists and character development,” said Dan. “Her characters have depth with very few shallow moments. This is a particularly masterful script with magnificent turns and twists.”

Shandra noted that while the story is about solving a murder, author Christie managed to slip in humorous moments as well.

“There are some great comedic parts that our cast does a great job with,” she said. “I think audiences will enjoy the mix of intrigue and humor.”

In The Mousetrap, an unlikely group of diverse travelers learn about one another when they become snowbound together. Five of the Monkswell Manor tenants become murder suspects along with the lodge’s owners, a newlywed couple who struggles to keep panic at bay.

The show holds the distinction of being the longest, continuously running play in the world. The Mousetrap opened in London’s West End in 1952 and ran continuously until a global pandemic shuttered it in March 2020. BrickStreet’s version of this murder mystery runs Sept. 30, Oct. 1-2, and Oct. 7-9. The curtain opens at 7 p.m. on Fridays and Saturdays and 2 p.m. on Sundays.

This production will be performed in BrickStreet Theatre’s new location at 1305 Highway 69 South in Forest City. The space houses the organization’s offices, costumes, props, and scene shop. The organization currently has a capital campaign under way to raise funds for improved theatrical lighting, sound, and audience seating. Tickets are available at www.brickstreettheatre.org or at the door, if still available. They may be also purchased by leaving a message with the BrickStreet Box Office at 641-585-1800.

Emerald ash borer (EAB) has been discovered in Mitchell County for the first time. Since its original detection in 2010, the invasive, ash tre…

Thousands of people will flood downtown Britt for the last Britt Car, Truck, Bike and Tractor Cruise of 2022 between 6 and 10 p.m. on Sept. 21…

Hancock County supervisors on Sept. 19 received an update from Derek Montgomery of Summit Carbon Solutions on the company’s proposed pipeline …

In an earlier-than-usual homecoming coronation, Dru Hagen and Jackson Johnson, were crowned as the 2022 West Hancock High School queen and kin…