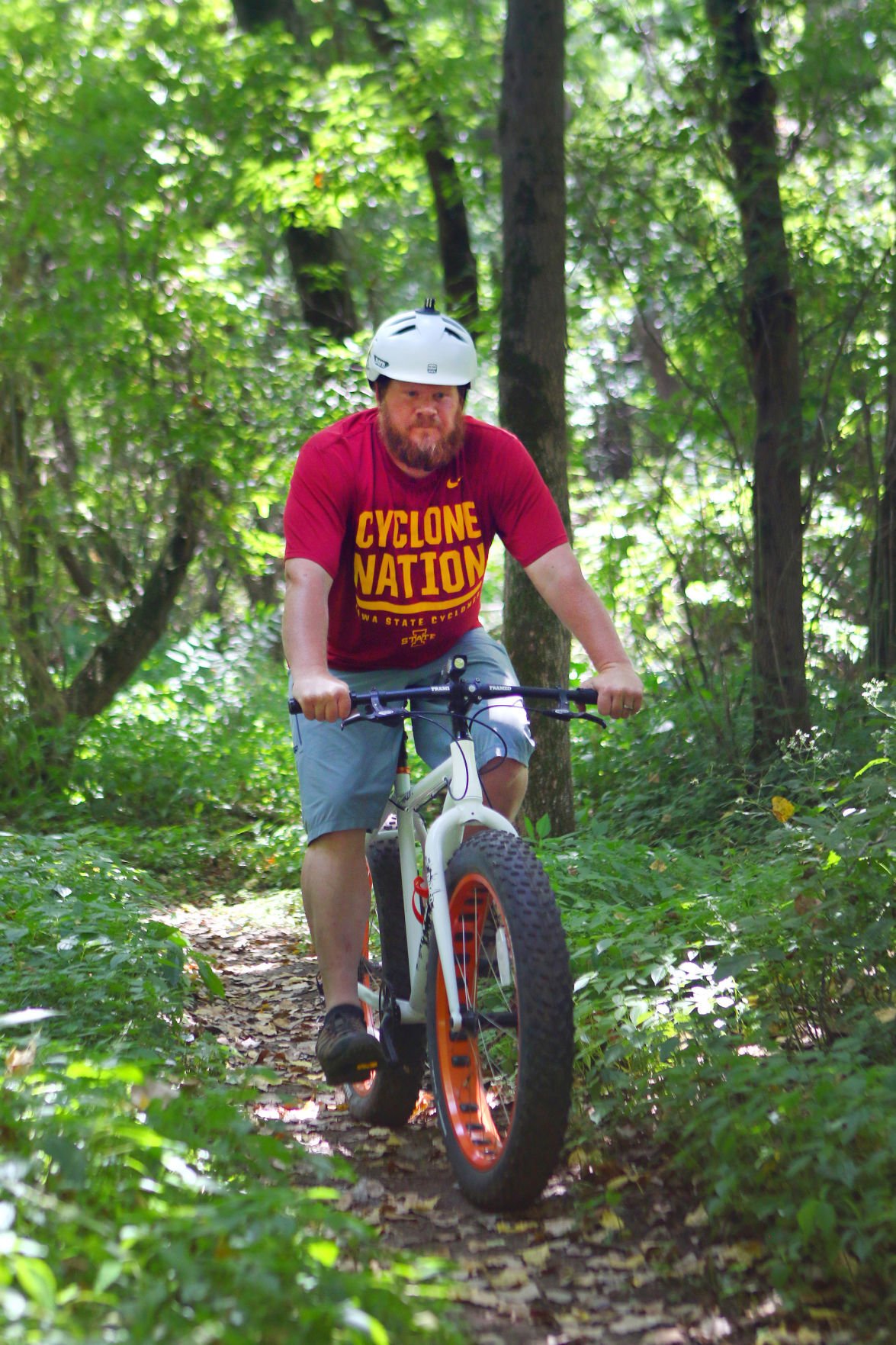 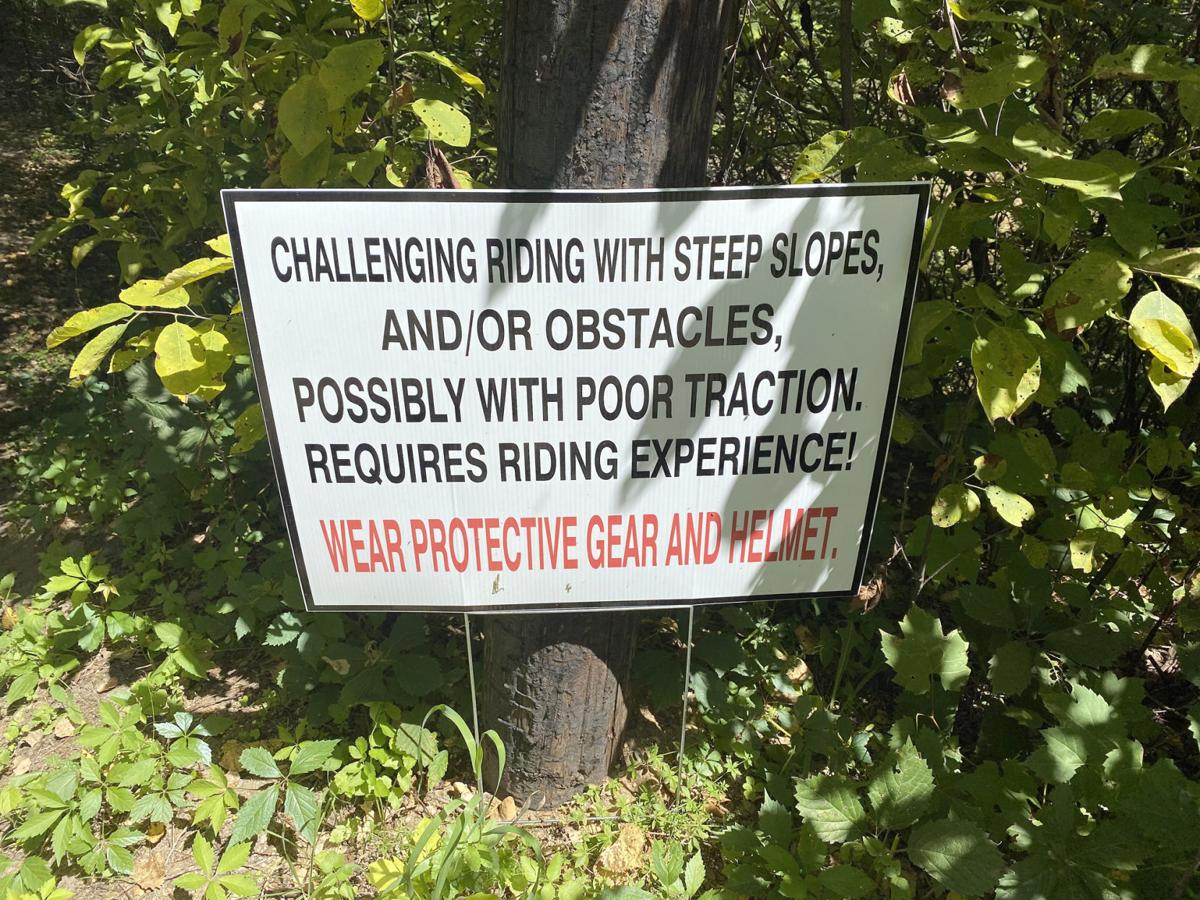 One of the signs that greet riders of the Junkyard Goat single-track off-road bicycle trail in Mitchell County.

Derek Mauser and the other members of the Mitchell County Mountain Goats bicycle club had selfish reasons for wanting to complete two new single track off-road bike trails in the county.

"We simply just love to ride the trails," said Mauser, as he and a few members prepared to mount up and ride the 2-mile Junkyard Goat trail near the entrance of the Mitchell County Conservation Board on Thursday.

But all agreed that there was even a bigger reason for building the trails than a passion for riding fat tire and mountain bikes on bumpy, uneven wooded terrain.

"We're trying to get people here to North Iowa," Mauser said. "We want to promote tourism and things to do in Mitchell County and this is a fun and exciting way to do that. It's a positive thing all around."

Mauser and a couple of the other stalwart members of the club who put in the work to make the trails a reality got the inspiration for the project after riding similar trails in Wisconsin last year.

"We rode at Levis Mounds in the Black River Falls and those are wonderful trails," said Mauser of the 32-trail system. "We got to talking and all of us agreed that we needed to do a smaller version of those trails in Mitchell County. So we did a smaller-scale project."

Once it was decided to move forward, fat bike enthusiast Andy Tates dove head first into the project. In his capacity as an employee of Mitchell County Conservation, Tates delivered the good news that the county would donate the land for the Junkyard Goat trail, which was once a junkyard.

"I said, 'Derek, we have some land down here that would make a great bike trail,'" Tates said. "It really is a perfect spot."

So last fall, after going to Mitchell County Conservation with a PowerPoint presentation, the final plans were approved and work began immediately. It wasn't long after that enthusiasts were riding the trail.

After Mauser came out with blue flags and walked the land and marked out the trail, volunteers wielded leaf blowers, rakes and other landscaping tools and carved out the single-track, off-road trail for all to enjoy.

Then came the fun part. The group started adding obstacles such as teeter-totters, up-and-overs (bridges over large logs), and bridges over the low-lying swampy areas. They even shaved the tops off of large fallen logs for riders to go over.

"At the same time, the City of Osage approached us and asked us if we could do the same thing on the existing Harry Cook Trail," Mauser said. "We immediately started working on Pine Run, a mile and a half trail that ends at Spring Park."

The two new trails are a part of the Cedar River Greenbelt System, that according to mycountyparks.com, is a four-mile limestone trail that parallels the west side of the Cedar River from Interstate Park at Mitchell to Falk's Wildlife Area 1.5 miles west of Osage at the Mitchell County Headquarters and Cedar Bridge Park location.

Mauser said the trails are "blue-rated" because of the degree of difficulty, with black diamond being the most difficult. He said riders should have some experience before traversing the trails.

He also says that there are ways around the obstacles for people who don't feel comfortable going over the added features.

Most of the materials to build the bridges and other obstacles were donated, and the City of Osage donated all of the signage on both trails.

As the club continues to grow, so do plans to add more obstacles to the existing trails. Mauser said the trails are a work in progress, as is the approach to make them better and in some cases, more challenging.

"Right now, we use the natural land features," Mauser said. "We could do more in the future, like trail engineering, but that takes money. We continue to reach out to the biking community and more and more people are showing up to help and using the trails."

One of the newest members of the club is Adam Nieman. He bought two new bikes just so he could enjoy the trails and be a part of "something big" in Mitchell County.

And while Nieman enjoys watching others navigate the trails, each time out he is becoming more comfortable and confident with his off-road skills.

"Every ride is different," he said. "I challenge myself every time out, and I have gotten much better. I continue to grow, and so has this club. We've reached a great spot and we'll continue to grow."

For Tates, one of the best things to come out of building the two single-track trails is watching the number of younger riders use it. He also enjoys the community aspect of the club and the returns on that.

"If people use this natural resource, they will protect it more," he said. "We really wanted to promote the county and the city. It's another thing for people to enjoy in Mitchell County."

Two of the younger riders Tates spoke of were at Junkyard Goat on Thursday. Both Henry Mauser and Franklin Bielecki said they were not really into school sports but like to stay active. The two new trails offer the 13-year-olds a way to do that.

"This is the go-to thing if you don't participate in sports here," Bielecki said. "It's fun and challenging, and you can do it on your own time. They are great trails."

Catch up on the stories from this weekend you might have missed:

As seen on Instagram: Stories from the Globe Gazette

Find the story that piqued your interest on Instagram here.

Catch up on the news you might have missed this week:

Carpenter nurse: 'I am answering the call'

Each day, Andrew Wilder sees his wife head into COVID-19 hot spots, and to him it has the same feel as a soldier going into battle.

There was never a doubt in Gayle Nelson's mind that this year's "Main to Main" marathon would happen.

Autumn Artistry, which marks its 20th year on Saturday, Sept. 19, is arguably one of the biggest events of the year for many Osage retailers a… 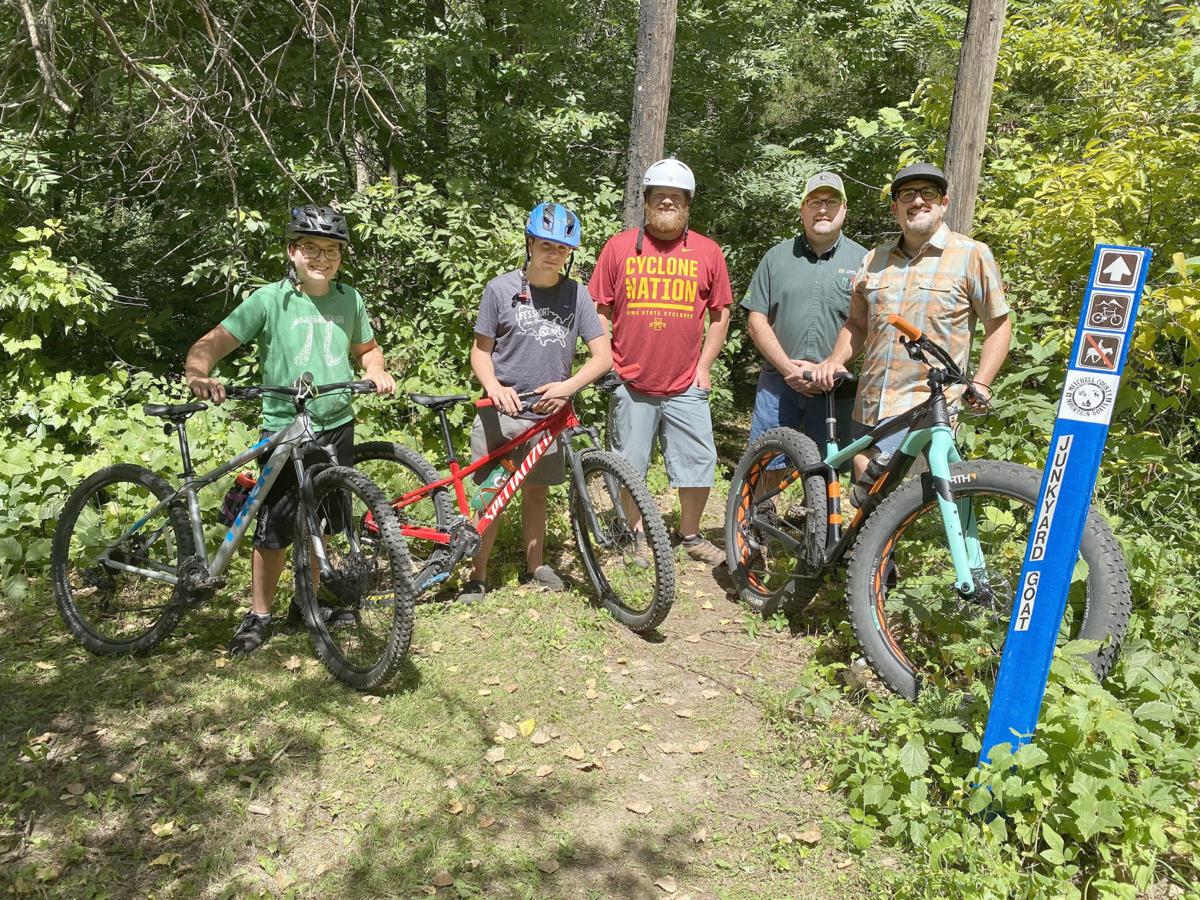 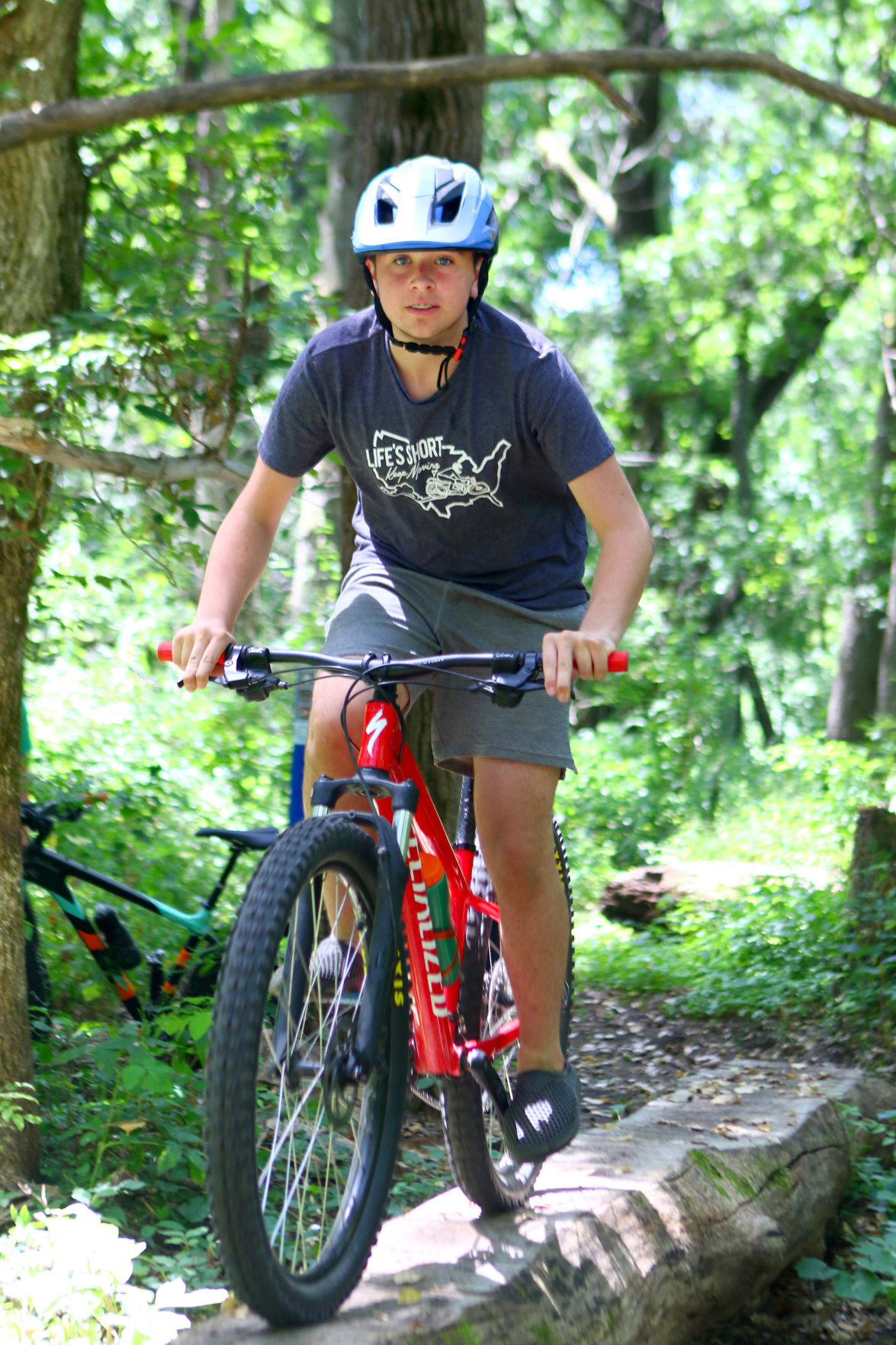 Franklin Bielecki, 13, tries his skills on one of the shaved log features on the 2-mile Junkyard Goat single track off-road bicycle trail in Mitchell County. 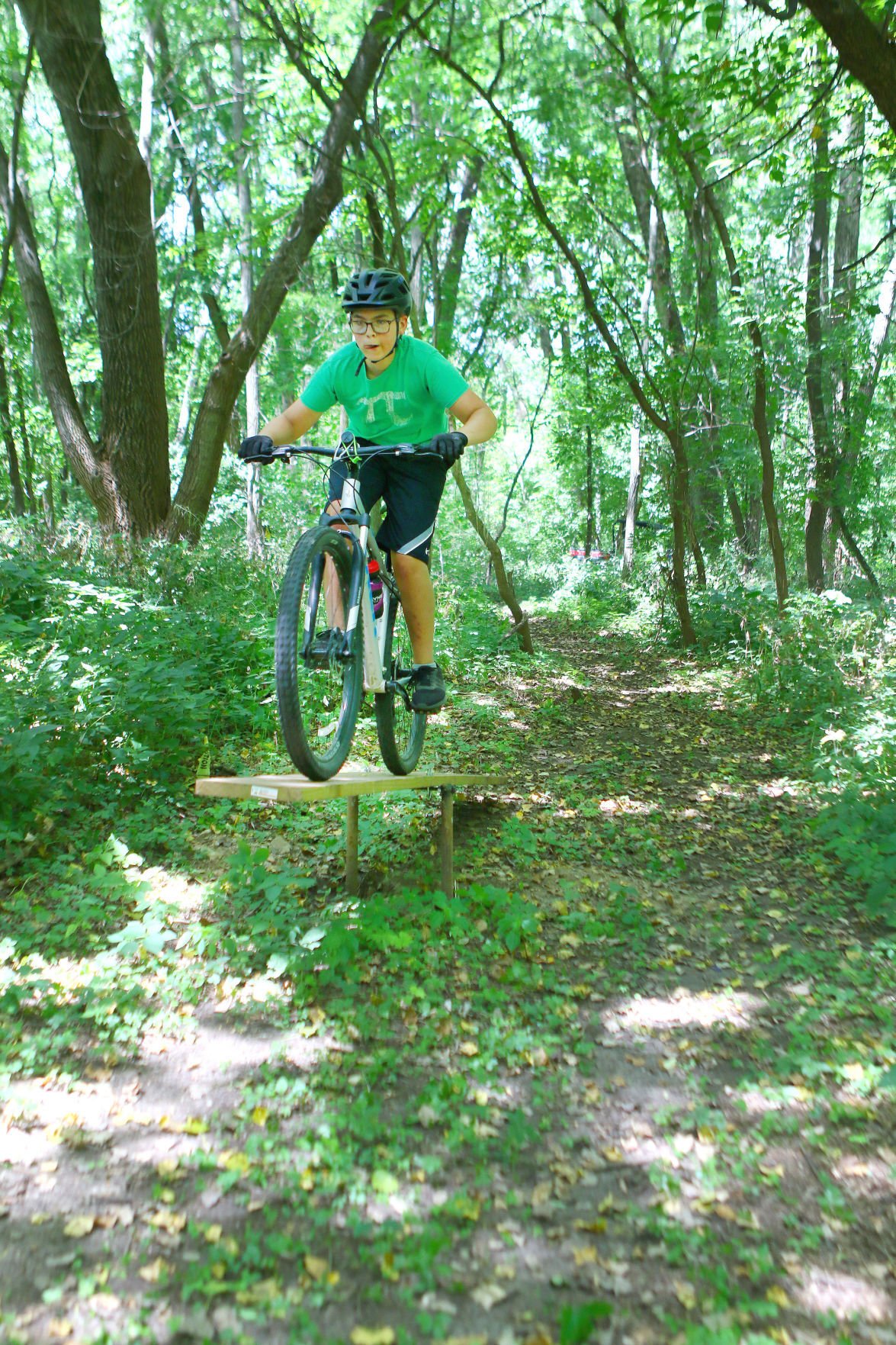 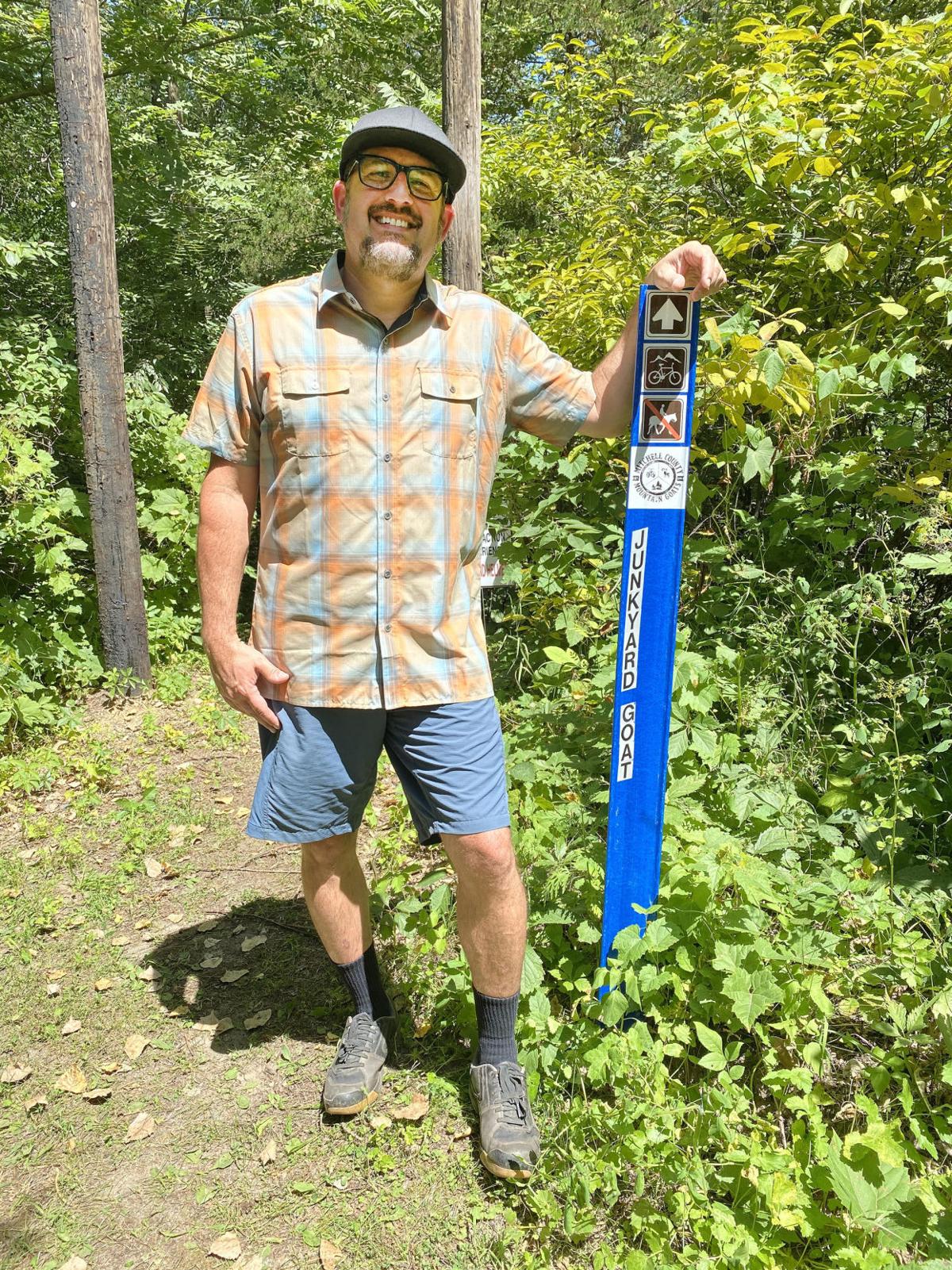 One of the main architects of the Junkyard Goat and Pine Run single-track off-road bicycle trails, two new trails that are a part of the Cedar River Greenbelt System, is Derek Mauser.

One of the signs that greet riders of the Junkyard Goat single-track off-road bicycle trail in Mitchell County.