The Knights beat Assumption, 9-4, and was handed its first loss of the season against Class 4A, No. 6 Dowling Catholic, 12-3.

In the Knights' win over Assumption, the two teams were scoreless through two innings. Newman Catholic scored at least one run in the next five innings and took home the victory.

Doug Taylor started on the mound and went over six innings, posting six strikeouts. There were no offensive stats on VarsityBound for the Knights.

In the loss to Dowling Catholic, the Knights got out to a 2-0 lead after one inning. The two teams were tied at three runs apiece after three frames of action.

Newman Catholic (10-1) is now ranked No. 1 in Class 1A in the latest rankings released on Monday.

The Lake Mills baseball team hosted three area teams on Saturday for a weekend tournament. Outside of the Bulldogs, St. Ansgar, Northwood-Kensett and Hampton-Dumont-CAL took part in the tournament.

Against HDC, the Saints got out to a 4-2 lead after four innings and never gave it back up. Ryan Cole led the Saints with three hits, a home run and four RBIs. Payton McNealy led the Bulldogs with one hits and two RBIs. The Saints are now ranked No. 9 in Class 1A in the latest rankings released on Monday.

Both Hampton-Dumont-CAL and Lake Mills finished 1-1 on the day. HDC beat Lake Mills, 11-0, in the head-to-head matchup between the two teams in five innings. Cal Heeren and Payton McNealy each had three hits to lead HDC. Mario De La Cruz pitched four of the five innings and struck out eight batters.

The Lake Mills softball team was the home of four area softball teams on Saturday. Lake Mills, Clear Lake, Garner-Hayfield-Ventura and Riceville all competed, with Riceville posting the best record of the tournament at 2-0.

The Wildcats earned an 11-0 win over Lake Mills and a 2-1 win over Clear Lake.

Riceville needed just six innings to beat Lake Mills. Callee Fair had the best day at the plate offensively, posting three hits and three RBIs. Morgan Fair went five innings and struck out five. The Bulldogs only managed one hit in the game.

Tied at 1-1 against Clear Lake heading into the bottom of the seventh inning, the Wildcats needed to make something happen. Riceville did exactly that by earning a walk-off run to win it. Fair and Josie Gansen each had a hit to lead Riceville.

Outside of the loss to the Wildcats, the Lions earned a 16-3 win over GHV. There were limited stats for the game on VarsityBound, but Maddie Graham earned two hits and an RBI to lead the Cardinals.

Similar to Clear Lake, GHV went 1-1 on the weekend. The Cardinals beat Lake Mills, 6-5, in their only win. Ally Derr led the Cardinals with two hits. For Lake Mills, Madison Edwards had three hits and three RBIs. Lake Mills finished the tournament with an 0-2 record.

The Mason City softball team struggled to get things going at the tournament in Humboldt on Saturday. The Mohawks lost 11-1 to Humboldt and 9-2 to Estherville Lincoln Central.

Against Humboldt, the Mohawks had five different players get a hit. However, the Wildcats proved to be too much and ended the game early in the fifth inning by the 10-run rule. Shaye Theobald had the lone RBI for the Mohawks.

In the loss to the Midgets, the Mohawks struggled offensively. Sam Norcross posted two of the team's three hits and also had an RBI. The Midgets scored four runs in the fifth inning and three in the sixth to put the game out of reach. Mason City is now 1-7 on the season.

The Charles City softball team had a solid day at the North Fayette Valley tournament. The Comets earned a 10-9 win over Solon and a 12-5 win over Union.

The Comets went into the bottom of the seventh inning against Solon trailing by two runs, but managed to score three to earn the walk-off win. The Comets posted 16 total hits, with Rachel Chambers leading with three hits and two RBIs.

In the win over Union, the Comets got out to a 5-3 lead after two innings and never looked back to earn the seven-run win. Chambers again led the Comets at the plate with two hits, a home run and four RBIs. Natalie White went four innings in the circle and struck out seven.

Juhl thrives on mound for St. Ansgar softball as an eighth grader

Lance Schutjer was not planning on using Josie Juhl this much in the circle to this point in the season.

One team entered Thursday's Top of Iowa non-conference softball contest batting over .400 while the other was hitting a collective batting ave… 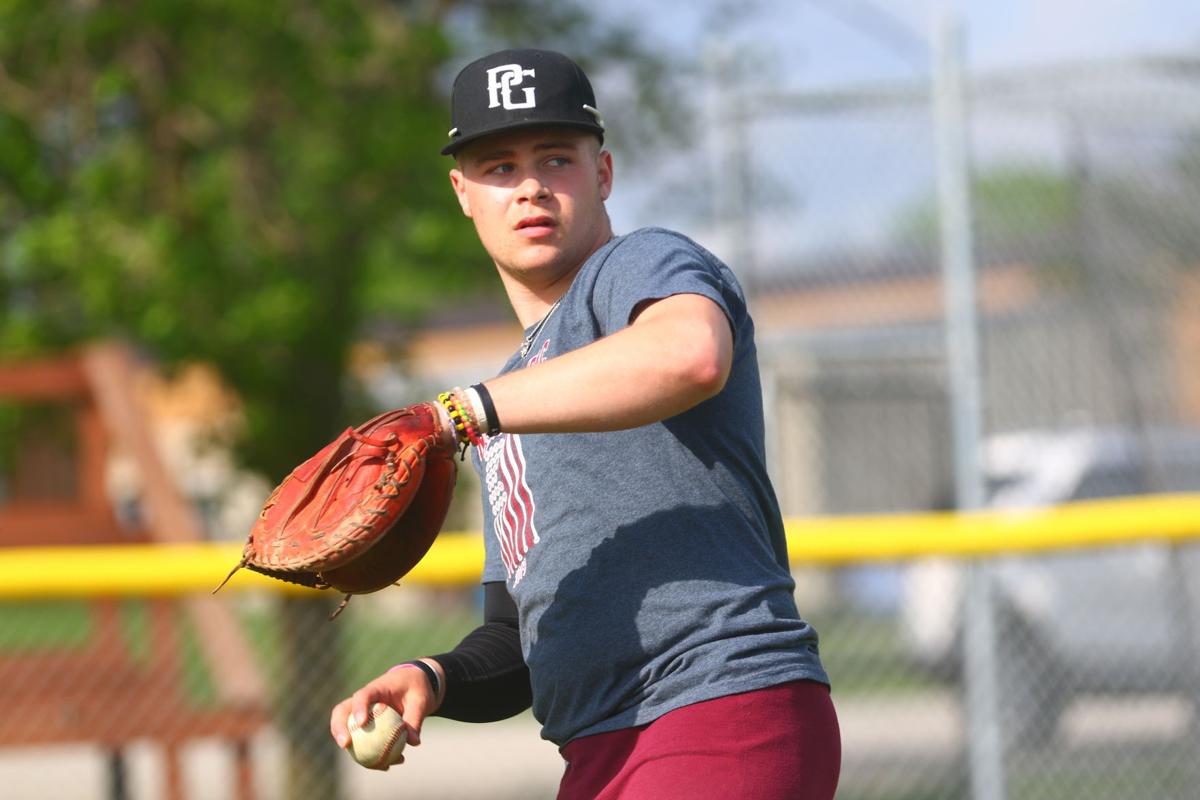 Max Burt loads up to throw a baseball at an earlier practice this season.