Father Bill married Carol Ann Deml on October 2 1981. In 1985 they adopted two Korean siblings, renaming them Charles and Lawrence after their grandfathers.

In 1989 he was recalled to ministry-this time by the Traditional Anglican Communion-where he served the people of St. Dunstan's Anglican Church in St. Louis Park, Minnesota for 16 years. His great love for the Scriptures along with his three visits to his “home office” in Israel gave his parishioners and weekly Scripture students fresh impressions for private reading, study, prayer and meditation.

Laughter followed him wherever he went throughout his life because of his story-and-joke-telling. In his retirement years, Bill kept his mind occupied with weather forecasts and music on the radio, and regularly could be found in his recliner watching television programs featuring religion, history, politics, movies, football, baseball and world affairs. A WWII buff, he could beat anyone at Trivial Pursuit, enjoyed a game of 500 with friends or cribbage with Carol. He built his own HO train table, cars and buildings which moved with him and was set up home after home.

This homemaker could make the aromas in the kitchen Greek, Italian, Mexican, Korean and anything gourmet that might strike his palette. In addition, he baked bread at least weekly, was a master gardener who canned and froze much of his produce, while his flower gardens won a Blooming Boulevard award in South Minneapolis.

His son Charles knew of his love for nature and Christmas-gifted him with bird feeders, which lured a glory of winter birds, including five pairs of cardinals. Spring, summer and autumn mornings, he could be found lounging on the deck he designed, watching deer, turkeys, eagles and birds of each season.

Unafraid of new ventures, he read up on how-to projects. Following the research, he did electrical updates, re-piped his entire Bloomington Avenue home and painted both indoors and outdoors.

Joy and sadness fill the hears of those who love this gentle man. He holds a special place in the hearts of his wife Carol of St. Ansgar, IA and his sons: Charles (Suzie) and Lawrence of Minneapolis, MN. He is preceded in death by his parents and five brothers and sisters. He is survived by sisters-in-law Rose (Dick) Trochlil of Winchester, VA; Cathy (Joe) Goetz of Forest Lake, MN and Lori (Doug) Haberman of Woodbury, MN; as well as dozens of relatives, nieces and nephews, grand-nieces and grand-nephews.

Mass of Christian Burial will be held on Friday, November 8, 2019 at Visitation Catholic Church in Stacyville, IA at 11:00 a.m. with Msgr. John Hemann officiating. Following the Mass, his body will be cremated and his ashes interred at Sacred Heart Cemetery in Owatonna, MN.

+1
To plant a tree in memory of William Sisterman as a living tribute, please visit Tribute Store. 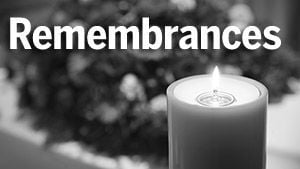