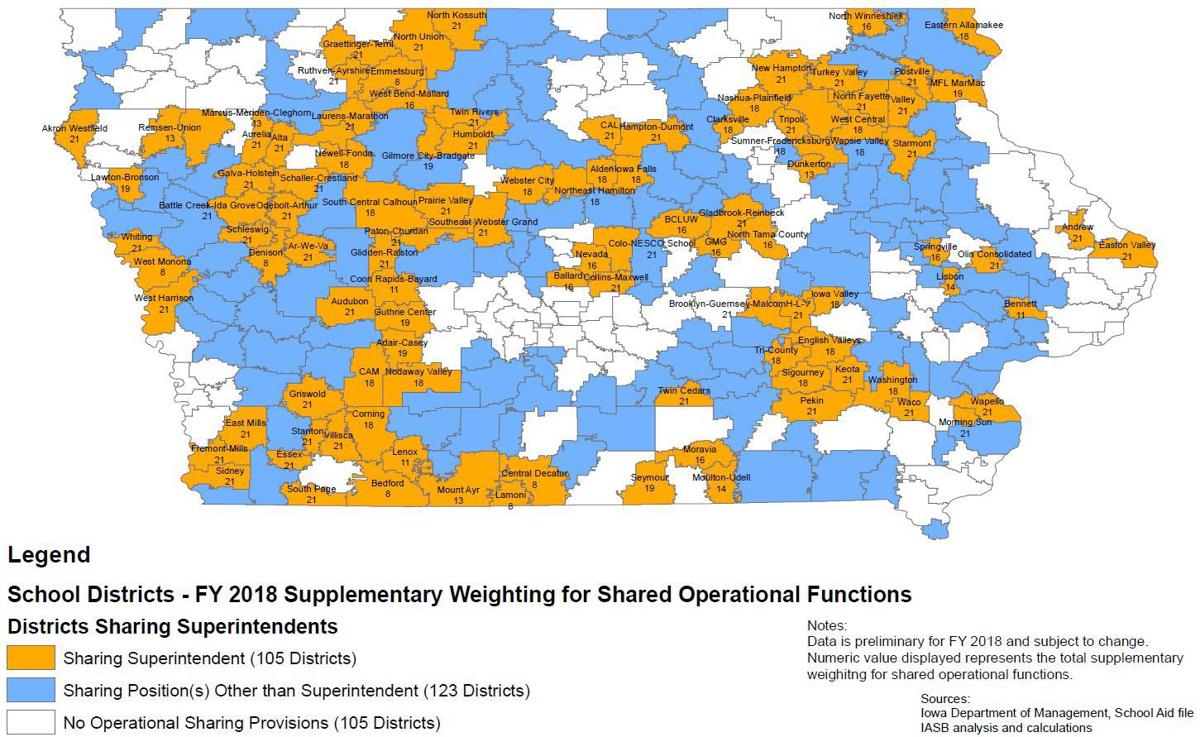 This map shows school districts in Iowa that are sharing superintendents and other positions. 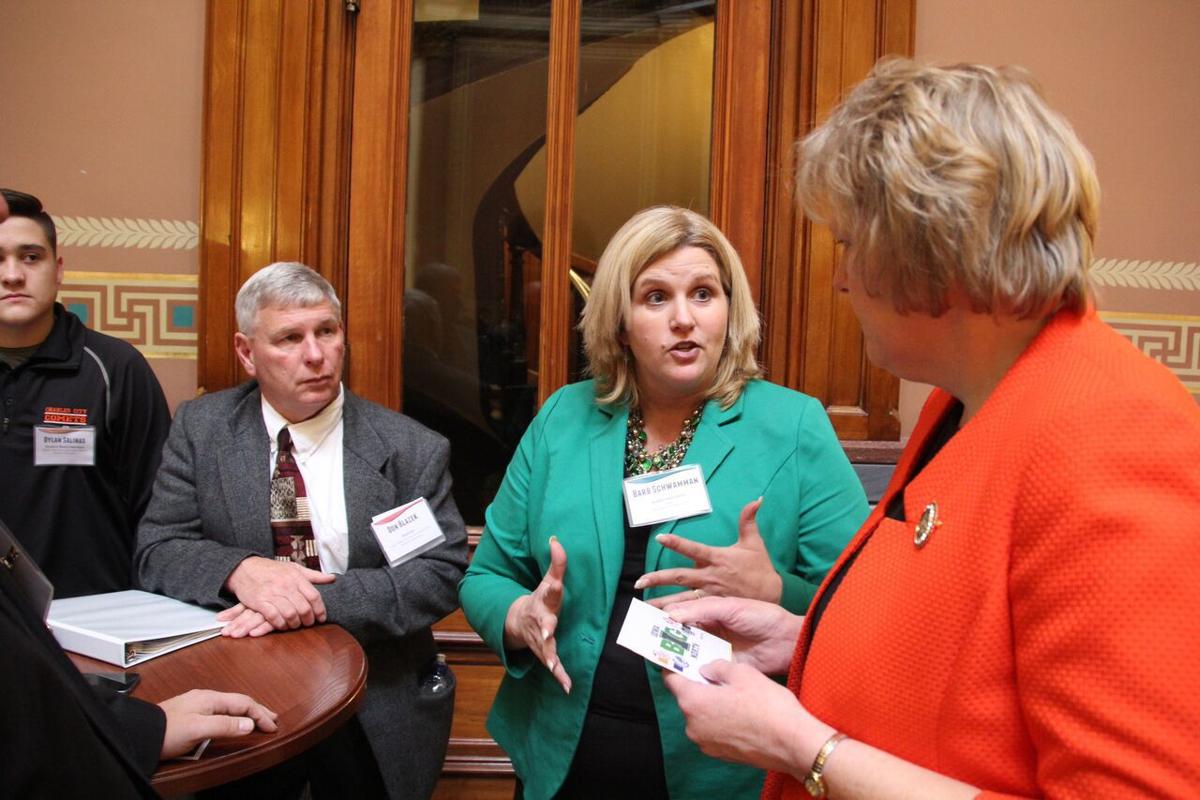 Osage Superintendent Barb Schwamman advocates for schools during the Iowa Big North's Advocacy Day at the Capitol in Des Moines.

DES MOINES — The number of Iowa school districts that share superintendents more than tripled over the past decade as more small, rural districts in particular looked for ways to save money.

The spike in shared superintendents largely can be traced to three factors, according to multiple school officials:

• A program started in 2007 that provides incentives by increasing state funding to districts that share administrative personnel.

The number of full-time superintendents in Iowa whose work and salary was shared by multiple school districts has increased from 16 during the 2007-08 school year to 52 this year, according to state Department of Education data.

The Riceville School Board had been faced with replacing its current superintendent, Steve Nicholson, who retired earlier in the year.

“I think this will make both of our districts stronger,” Schwamman said during an Osage School Board meeting in March. “We are not looking to shut them (Riceville) down.

“It’s always about what’s best for, not only our students, but all 2,200 students in Mitchell County.”

The St. Ansgar School District has created an online academy for German as well as for Spanish. With the departure of a Spanish teacher at Osage High School, students, this fall, will participate in the online Spanish option with St. Ansgar.

The overriding reason districts decide to share a superintendent is to curtail costs, school officials said. The average superintendent salary this year was $147,825, according to state data. By sharing a superintendent’s salary, districts can save money for costs more directly tied to the classroom.

The decision to share superintendents is tied to a web of fiscal factors, school officials said.

Many times, the districts that decide to share a superintendent are facing declining student enrollment. That causes a drop in available money because schools receive state funding on a per-student basis.

But perhaps the biggest driver in the spike in shared superintendents is the state incentive program, created in 2007, that adds state funding to districts that share administrative personnel. The program provides additional funding by counting extra students for each administrative position a district shares, up to 21 students. Districts that reach the maximum allotment would receive roughly an extra $140,000 in fiscal year 2018, according to calculations by the Iowa Association of School Boards.

So participating districts not only reduce spending by sharing a superintendent’s salary with another district, they get extra funding from the state incentive program.

After the program was implemented, it took only two years for the number of shared full-time superintendents in the state to nearly double.

The state incentive program allows districts to receive the extra funding for five years, and the entire program is scheduled to expire after fiscal 2020. School officials are lobbying state lawmakers to remove the five-year limit and extend the program into perpetuity.

“If this funding goes away, districts who regularly rely on it, should be concerned,” Schwamman said. “They key to all of this is state supplemental aid. We need to see an increase.

“State property taxes continue to decline, which causes districts to have to make up the difference, by increasing local property taxes. We see it across all social service settings.”

She mentioned some districts have been using the incentive funds for many years. “What a testament to the schools in Mitchell County, who haven’t had to rely on the funds for operation.

“However, collaboration is a good thing. We need to always be working smarter, not harder.”

Sharing a superintendent comes with its challenges. The individual is doing the work in two districts; that can mean double the school board meetings, paperwork and other duties. It often means a shared superintendent is not able to spend as much time interacting with the public.

And it means the districts involved, especially the school boards, must work closely together.

“The members of the Osage School Board knew we needed to be creative, as a district, for the best of our students,” Schwamman said. "It was an unanimous decision to share with Riceville.”

When districts enter into a sharing agreement, they determine how much time a superintendent will spend in either district. In order to qualify for the state incentive program, the sharing agreement must include at least 20 percent of the administrator’s time spent at one of the districts.

“Technology makes communication easier than it was in the past, when superintendents were first being shared,” Schwamman said. “The day(s) of the week, in each district, isn’t as important.

“It is about the communication and flexibility with both districts.”

Part-time superintendents have nearly disappeared in the past decade; there were 30 in the 2007-08 school year and only seven this year, according to state data.

For recruiting purposes, school boards have found it easier to attract one candidate to work full-time but be shared by two districts than to find a superintendent candidate willing to work part-time.

And shared superintendents said they would rather perform the same job functions in multiple districts than be in one district but have multiple jobs.

“Burn out is always a concern,” Schwamman said. “From my previous experiences, I worked for six years in a district with a shared superintendent.

“I saw what worked and what didn’t work well. It is a decision you don’t take lightly.”

-Jim Cross, Editor of the Mitchell County Press-News, contributed to this story

This map shows school districts in Iowa that are sharing superintendents and other positions.

Osage Superintendent Barb Schwamman advocates for schools during the Iowa Big North's Advocacy Day at the Capitol in Des Moines.