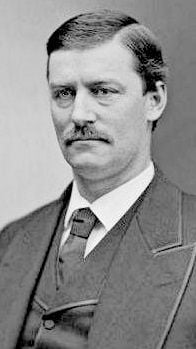 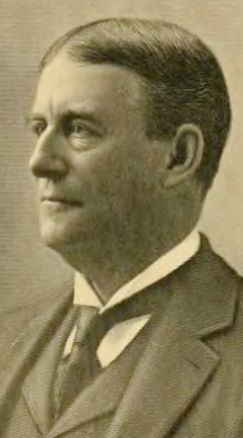 (Editor’s Note: 2015 marks the 150th anniversary of the Mitchell County Press-News, founded in 1865 by Thomas Atherton. We will be highlighting some of the early history over the course of the year, and other significant events covered by the Press-News).

But there was a day when the name of Stilson Hutchins – an early newspaper editor in Mitchell County – was famous for not only his founding of the Washington Post some 20 years after he left Osage, but for his influence and wealth that today can still be felt in the nation’s capital.

Hutchins was one of a legion of early newspaper editors who flooded into new territories in the 1850s – and if not a peer of Thomas Atherton, founder of the Mitchell County Press-News, they certainly knew one another.

But why Hutchins, a native of New Hampshire, came to Osage at all remains cloudy. It is known that his stepfather, Hiram Somerby, lived, at varying times, in Mitchell and Howard counties. Another clue may be in his mother’s maiden name: Eaton. A. K. Eaton was an early Osage pioneer who was appointed the receiver for the Land Office that was moved from Decorah to Osage in the 1850s. It is noted elsewhere in the histories that the North Iowan had “a large share of land office notices.” However, the shared name may be nothing more than coincidental.

One history says he was 19 when he arrived in Osage; others say 17. The reason for the discrepancy is the variance of years he was said to have arrived in. Some say he came as early as 1854; others say as late as 1857.

The one thing they all agree on is Hutchins first worked on the “Osage Democrat” before establishing “The North Iowan” with another journalist by the name of Snow.

By the time he came to Osage, after attending Harvard for a year (other histories say he graduated from Harvard), he already had some newspaper experience. He worked for a short time as a reporter for the Boston Herald.

In Osage, some reported in later years that Hutchins “was a brilliant, spicy writer and his paper was universally liked.”

Problem was, Hutchins probably wasn’t apparently thrilled with Osage. He left town sometime in the late 1850s (one history puts it as late as 1860). The pioneering spirit may have been dampened severely in the winter of 1856-57 – a season so severe that sub-zero temperatures chilled and blizzard winds buffeted the North Iowa area for months.

“People in the village were lost within two blocks of their homes” due to the white-outs and one stagecoach got so badly lost that all passengers were in danger for their lives. Only a wily stagecoach driver who refused to stay in the coach was lucky enough to spy a light in a window and successfully made his way to it. Farmers lost entire herds due to the cold.

Whatever the reason for leaving, Hutchins made his way to Des Moines (State Journal) Dubuque (Daily Herald), and then St. Louis (The Times) to work on papers. He was a fervent Democrat who had no problem taking President Abraham Lincoln to task for starting the Civil War.

After a brief turn as a state representative, he made his way to the nation’s capital in 1877 and established the Post, which he operated until 1889, when his son Walter took over. He eventually rid himself of all his newspaper properties – he owned the morning newspapers and one evening paper – to pursue the development of the linotype, a machine that created hot metal type that was used for decades after and created by Ottmar Mergenthaler. The enterprise made Hutchins wealthy.

He turned to other pursuits to beautify the nation’s hometown – he donated statues that stand to this day – and operated in real estate and development. At one point, he returned to New Hampshire, purchased another paper and again was chosen representative to the legislature. The Granite Magazine of the era called him “a vigorous and forceful speaker, as well as a writer. His style was lucid, compact and comprehensive, carrying both point and weight.”

Hutchins died one month after suffering a cerebral hemorrhage, on April 21, 1912.