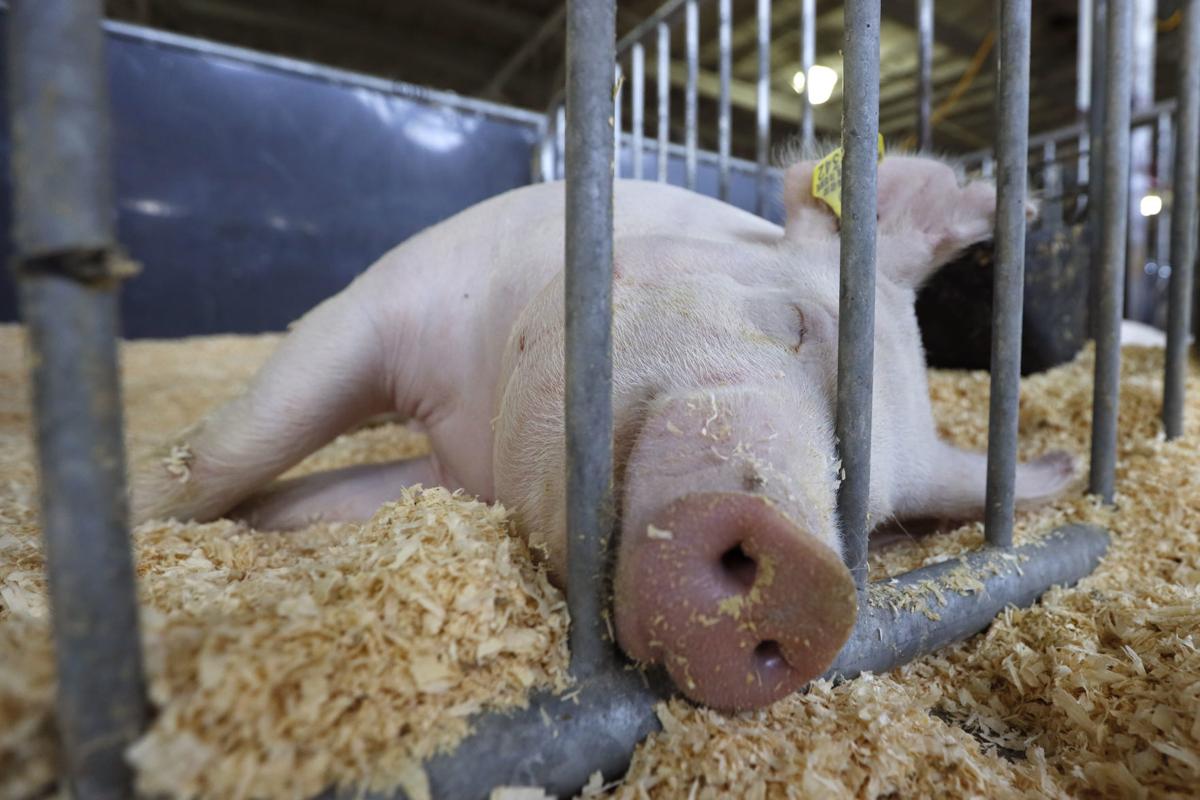 A hog sleeps in its pen before judging at the Iowa State Fair swine barn on Aug. 8, 2019, in Des Moines. 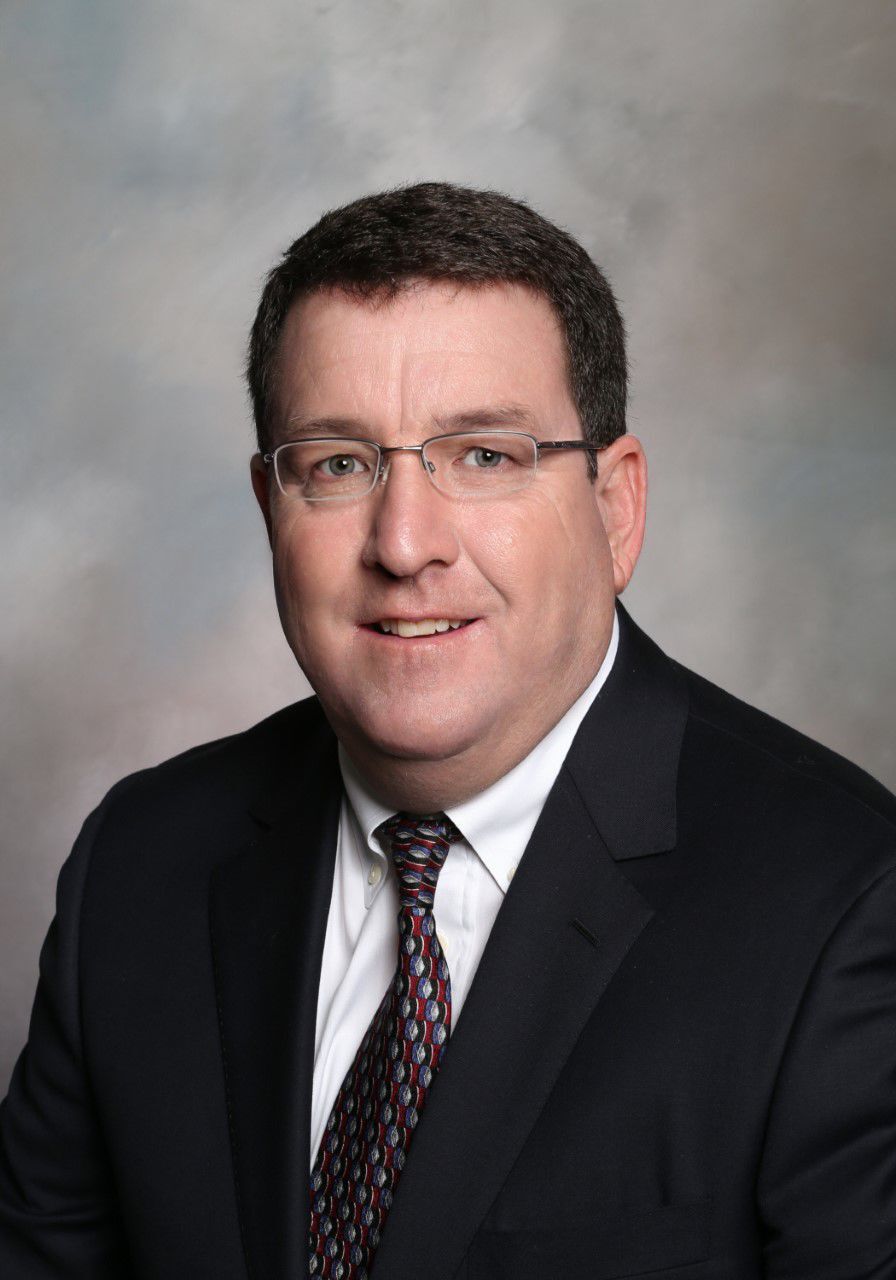 McGonegle who was raised on a diversified grain and livestock farm near Vincent, has been the CEO of the Iowa Pork Producers for the past five years. He participated in both 4-H and FFA. He graduated from Iowa State University (ISU) with a major in Animal Science.

He also spent time in the commercial feed industry before becoming CEO of the Iowa Pork Producers in 2015. Today he and his wife Julie live in Urbandale, and their two children currently attend ISU.

Here is what he had to say about issues facing the pork industry:

In the Pork Producers recent economic impact study, it was found that 5,500 farms in Iowa have pigs on them. The pork industry is credited with employing a workforce of 147,000 workers, which includes farmers, feed mill workers, veterinarians, truckers, and others who help get pork to consumers’ tables.

At any given time there are around 24 million hogs on Iowa farms, and swine producers in Iowa are responsible for about one-third of the hogs raised in the U.S. Twenty two percent of the corn and soybeans produced in Iowa are consumed by Iowa Hogs.

Minnesota is the second largest producer of hogs in the U.S, followed by number three North Carolina.

“If you add Minnesota and North Carolina together, their total production gets pretty close to us,” said McGonegle. “I think it is important to share with neighbors and friends what the pork industry provides in jobs, economics and taxes for the state.”

African Swine Fever is of great concern for hog producers, even though the disease hasn’t been discovered on this continent. Over the past several years, the virus has been credited with destroying over half of some Asian countries and China’s swine herds. Though China swine production is beginning to recover, there is constant fear of another outbreak somewhere else in the world.

“African Swine fever has been in the news over the last couple of weeks as it was discovered in six wild boars in Germany," McGonegle said. "Once the disease is discovered in a country, exports markets are closed. Iowa exports about 25 percent of its pork, and it would have a huge economic impact on the industry and on the State of Iowa if the disease came to the U.S.

“The disease is passed mostly by nose to nose contact in live hogs, but the disease can also be carried in food, meat, and feed products which are imported. We have to practice high bio-security on farms, and support boarder protection. We can’t take risks of it coming in through food or feed products. We also need to be prepared if we do get it.”

Trade with China and other importing countries

“The Chinese buy pork from every major processor in the country. Smithfield is a major supplier, but not the only supplier. It’s basically product dependent,” said McGonegle. “One good thing is they buy tails and feet and other products that US consumers aren’t interested in. I was in one grocery store in China and pigs feet were more expensive than pork chops.

“One benefit of traveling to foreign markets is to see their product needs. Every country has different needs than we have here. Processors have to change products to meet export markets.”

Two of the major environmental projects that pork producers are working on is water and air quality.

“We are working to put cover crops on with manure, which holds the nutrients in fields. A number of producers put buffer strips on the edges of their fields, and some stay a distance from fence rows when applying manure," McGonegle said. "They are also working with low-disturbance knives that don’t disturb the soil as much and prevents erosion. Variable manure application is also being used by some producers.

“Nutrition can help with both odder and water quality. A lot more trees are planted around barns to help control odder, as well as the use of electrostatic screens. There is new technology beyond that which is being worked on. We want to be both good neighbors and economically viable.”

McGonegle also encourages producers to contact the Coalition to Support Iowa Farmers, which provides all the latest information on environmental issues.

“One of the fun things in the Iowa Pork Industry is there is a place for 4-H and FFA kids, Niman Ranch producers, big commercial units, and show pig producers. I celebrate diversity rather than saying you can only raise hogs one way,” said McGonegle, who encourages consumers to look for current bargains that are being run on pork products during October Pork Month.

When Jim Wherry was growing up, he thought often about leaving his native Mitchell County for something bigger and more sprawling. But 45 year…

Al Winters is focused on the future.

Dave Stauffer, a Mitchell County resident of more than 42 years, is clear about his intent in running for a seat on the board of supervisors.

Hearing the City of Osage was concerned with two deteriorating monuments at the Osage Cemetery, Betty McCarthy has offered her services to hel…

New Osage shop graduates to brick and mortar from online

In honor of National Cooperative Month in October, Northern Country Coop is continuing its participation in the Land O’Lakes Foundation Member…

No criminal charges for Tyson in video of alleged animal neglect

A video that sparked social media outrage fell short of demonstrating criminal activity, according to the Mitchell County Attorney's Office.

Those with cravings for meat sticks, cheese curds or even steaks from S&S Meats and Spirits in Osage can now get them even when the store …

A hog sleeps in its pen before judging at the Iowa State Fair swine barn on Aug. 8, 2019, in Des Moines.