For 16 years, Erin Wilson served as Osage Community High School’s mathematics instructor. But she is hanging up her abacus for a new role.

This is Wilson’s first year as high school counselor. While it might seem an odd transition, Wilson believes there is an intersection between math and shepherding teenagers.

“Over the past years, I found more and more students were coming to me to ask questions about college and scholarships,” Wilson said. “I was writing a lot more recommendation letters. I think they felt comfortable with me. They also knew I had originally graduated from Osage and I came back to the community. I feel they trusted me to give them honest and concise answers, and help them figure out their own answers.”

Wilson graduated from Osage in 1998, and she earned her bachelor of science degree in mathematics from Upper Iowa University in 2002. For three years, she was a high school math teacher at Lake Mills before coming home.

In the spring of 2020, Wilson made a leap of faith and applied to graduate school at Buena Vista University for school counseling. She expects to earn her degree this May.

For Wilson, being honest and clear is just part of being a math person. If she does not have the answer, she possesses the problem solving skills to find it.

“I miss being in the classroom,” she said of leaving math behind. “I miss having time to meet with 20 students to build that relationship. Whereas here in counseling, I build relationships outside of class, in the hallway, or the kids come to me."

“I’m in between a friend and a parent. Sometimes I have to say things they don’t want to hear. But I don’t turn anyone away, either.” said Wilson.

Currently, she is working with a large group of seniors who are applying for scholarships. Her duties as high school counselor involve more than just the ACT and FAFSA, it involves mental health.

When Wilson returned to Osage, in addition to teaching math, she was the middle school cheerleading coach for three years, the result of her mother being high school coach. Unlike her two sisters, Wilson had not been a cheerleader. However, she participated in basketball and softball for the Green Devils.

In her return to Osage, she ran an ACT math prep group and a math fundraiser to buy classroom graphing calculators.

For a decade, she has been involved in Osage Homecoming, planning and running the community pep rally. Her duties expanded last fall to planning the week, including the halftime show at the football game.

Wilson was able to acclimate herself to her counseling job before the start of the schoolyear, working with students over the summer break.

There is more alone time in counseling as opposed to math, Wilson says, as she works in her office with credit counting and credit checks to make sure students are on track to graduate.

Different grades have different problems. At the beginning of the year, freshman are disoriented and anxious about a new school. By the end of the year, seniors applying for college and watching a chapter in their lives closing and can be overwhelmed with the transition.

“I feel like everything I do is a new experience,” Wilson said, as she creates classes and builds schedules. “This year, I’m just trying to learn as much as possible, and I’m focusing more on college and career readiness.

“Next year I hope to expand and focus more on social and emotional learning and mental health, and teaching positive coping strategies for anxiety and depression and stress, which is a lot of what students have indicated they need.”

Mental health has become an area of focus and worry not only for Wilson, but for the entire school district. A survey from 2021 sheds light on the seriousness of the issue. The numbers concern Wilson. In a needs assessment for students, staff and parents, around 65 percent of students said they needed help with coping strategies for either depression, anxiety or stress.

As guidance counselor this schoolyear, Wilson has sent out surveys to students and staff for what she describes as a ‘temperature check.’

“Where are you now? How are you feeling? The students have indicated they have high levels of stress and anxiety,” Wilson said. “Some kids just need someone to hear them, to listen.”

Occasionally, Wilson must send students to mental healthcare providers. The goal for everyone is to prevent a tragedy. In college, Wilson studies suicide assessment. All staff at school must complete mandatory training on suicide.

The students have also indicated they do not have the appropriate coping skills and strategies, and they struggle with identifying and dealing with emotions. Wilson believes there is an urgent need for mental health counseling, and the COVID-19 pandemic has made problems worse.

“In society in general, everyone is overwhelmed,” she said. “Either overwhelmed with information, or with stress from their own personal trauma.”

Social media is part of this new environment.

In research throughout her coursework, Wilson has found significant data showing a correlation between social media and teenage anxiety and depression.

“I think constantly being connected increases anxiety and depression among adolescents,” she said. “I don’t think some adolescents can appropriately handle social media. They need some guidance.”

Forums such as Facebook can bring not only friends, but instant negativity.

Wilson says she does not have the silver bullet for social media, but she believes education could be a preventative measure.

“As a parent, when my child gets to be that age, we will have rules and guidelines,” she said. “I always ask kids if they have a time where phones must be put away at night, or if they go to bed with them.”

Wilson has noticed social media affecting sleep patterns and the quality of sleep, leaving some students in a drugged state.

“We have an excellent school counseling program in art,” Wilson said. “She does a good job of identifying emotions and helping students express them in a healthy way. It’s followed up by the middle school as well.”

Sharon Reinardy is Osage’s middle school counselor. At a May school board meeting, Amy Abels was announced as the shared social worker, with the goal to increase social worker availability from one day per week to two days.

“That’s because of the increase of mental health needs we have in the district,” Osage Superintendent Barb Schwamman said.

“I feel like I don’t get as many of those issues because they’ve laid the foundation,” Wilson said. 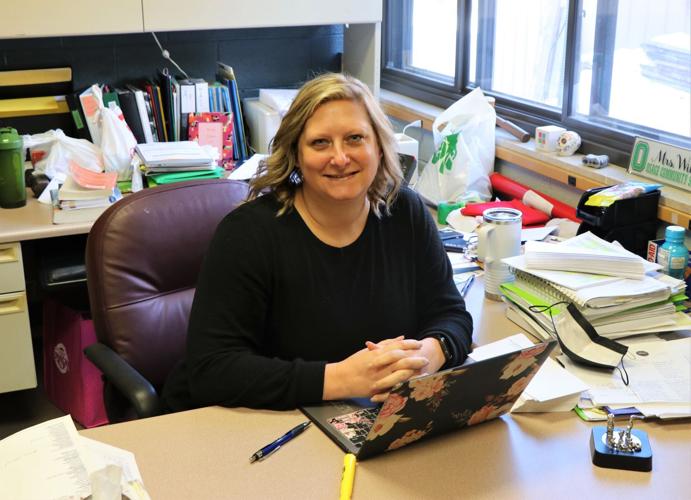 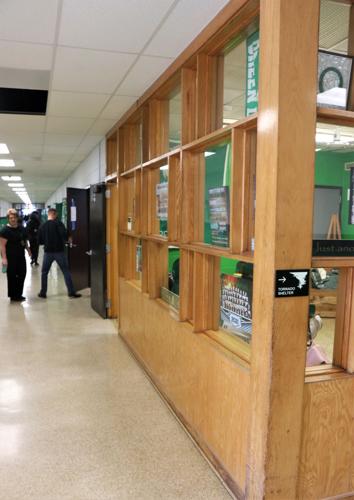 Students file through the hallway outside of Erin Wilson's office at the Osage high school/middle school.