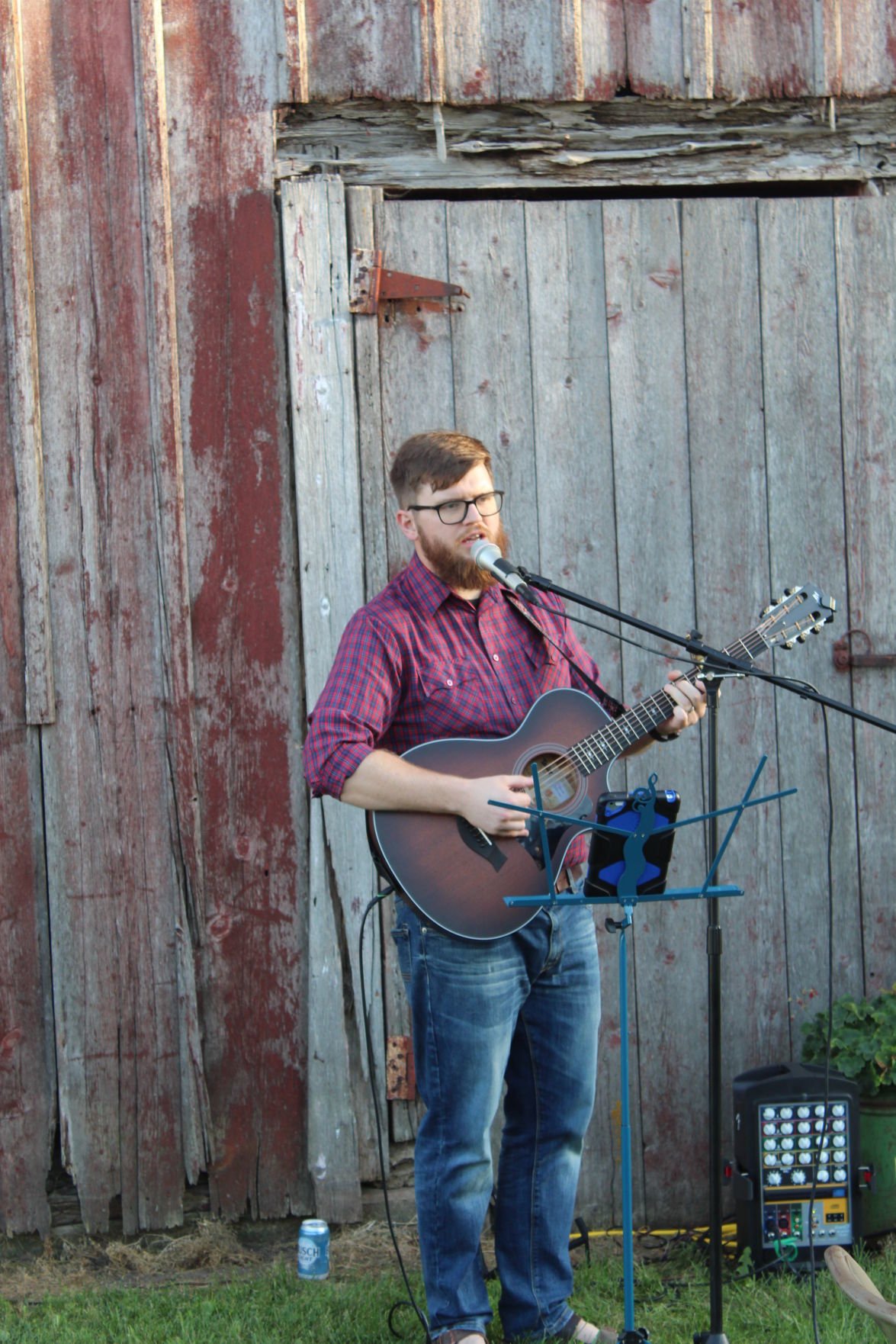 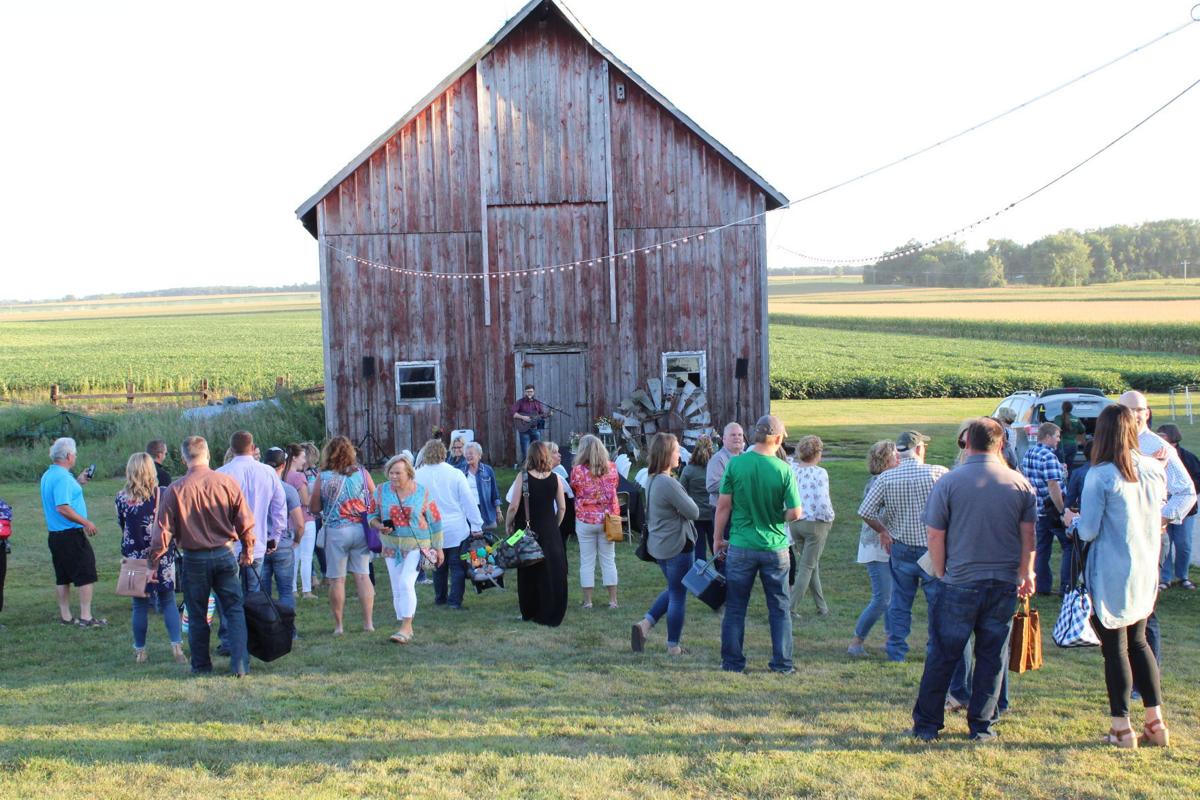 The guests arrive at the Amundson Farm. 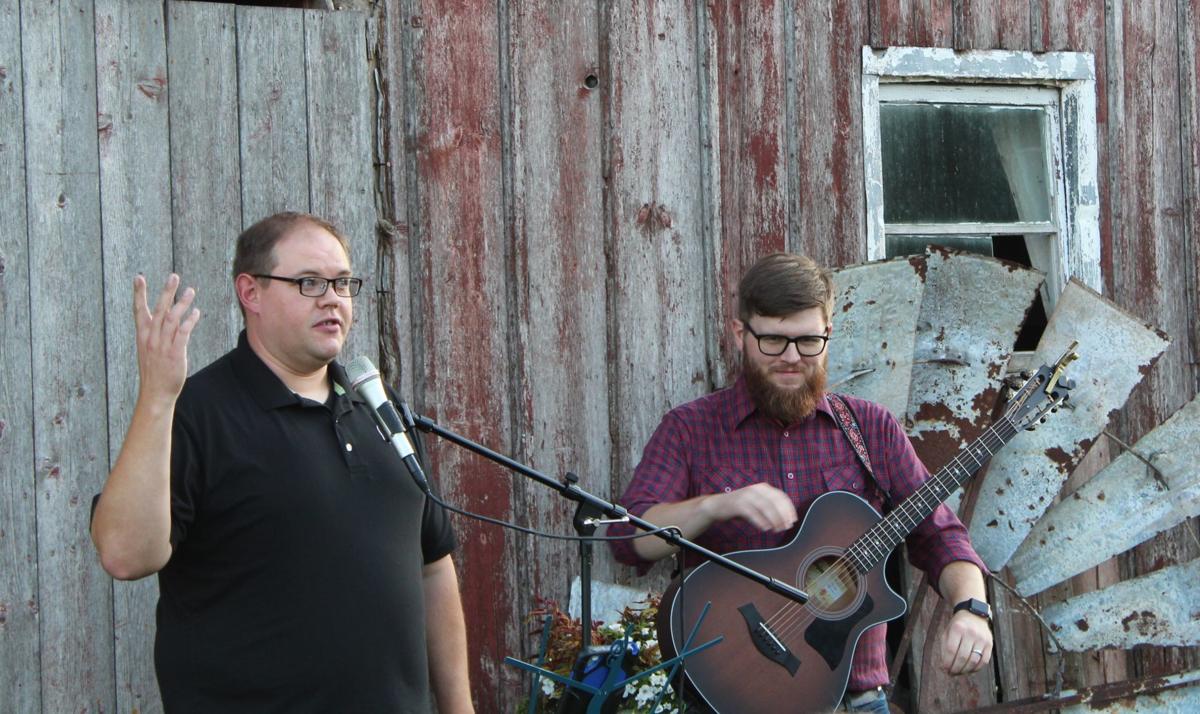 Steve Strasheim, owner of Twister River Farm, was the coordinator and emcee for this year's event. 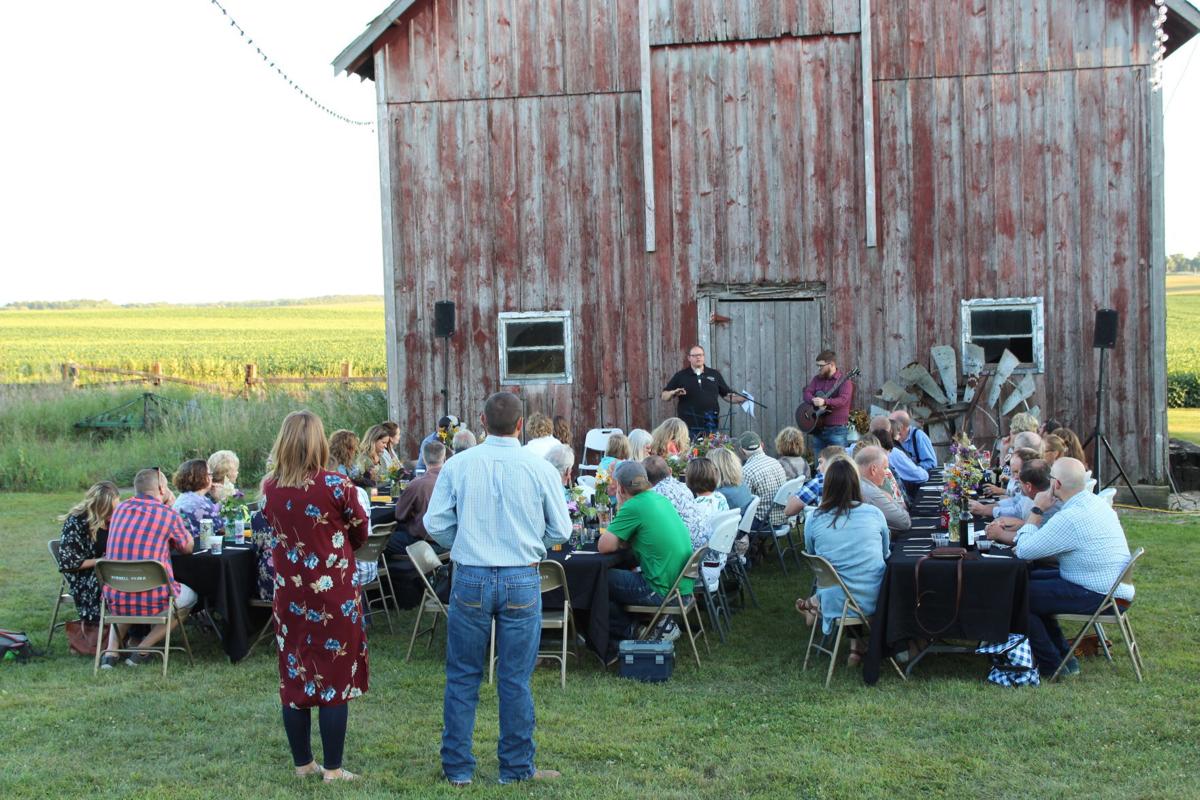 Strasheim speaks to those in attendance at the Farm to Fork event. 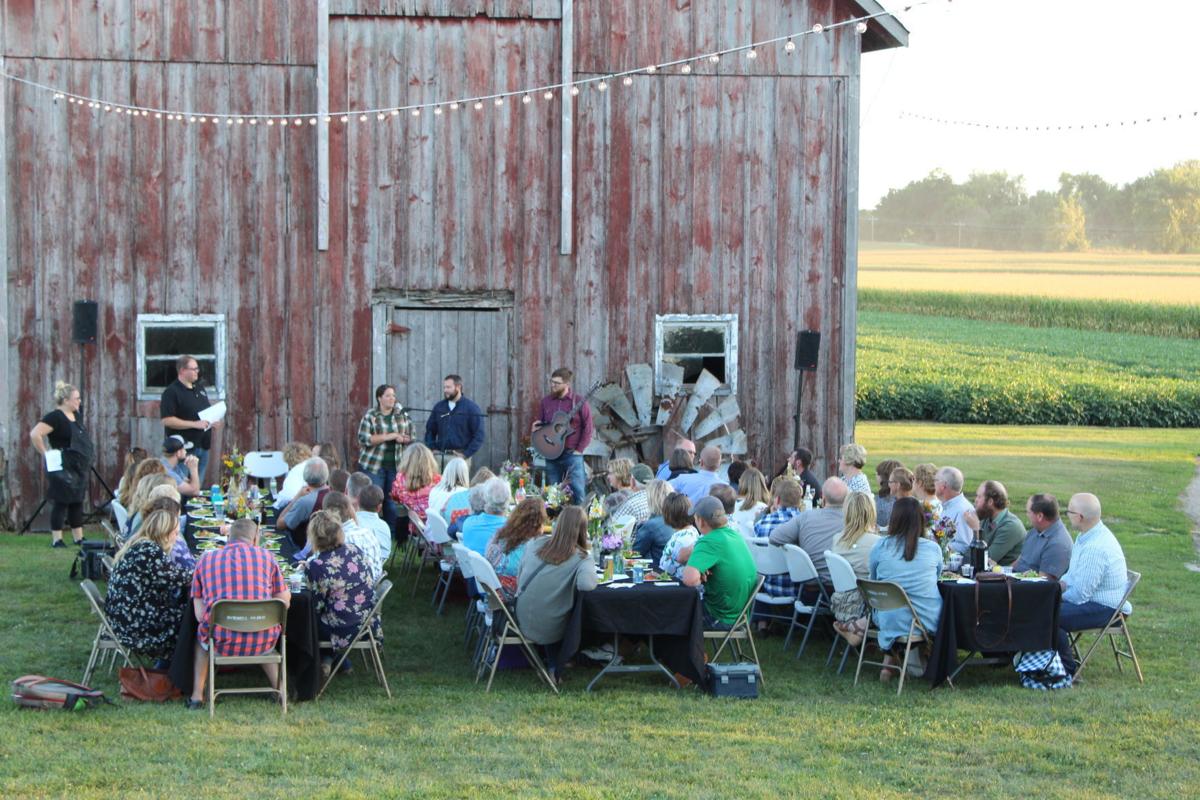 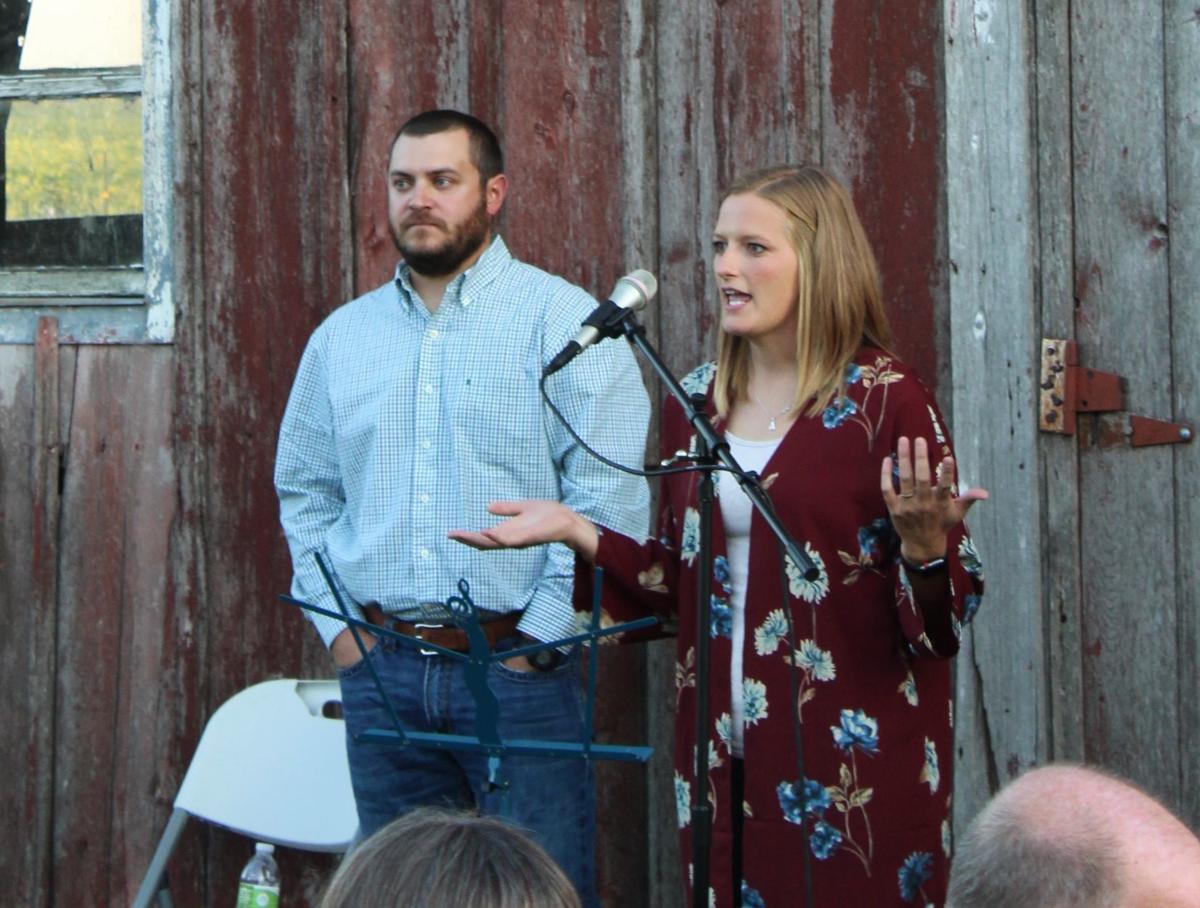 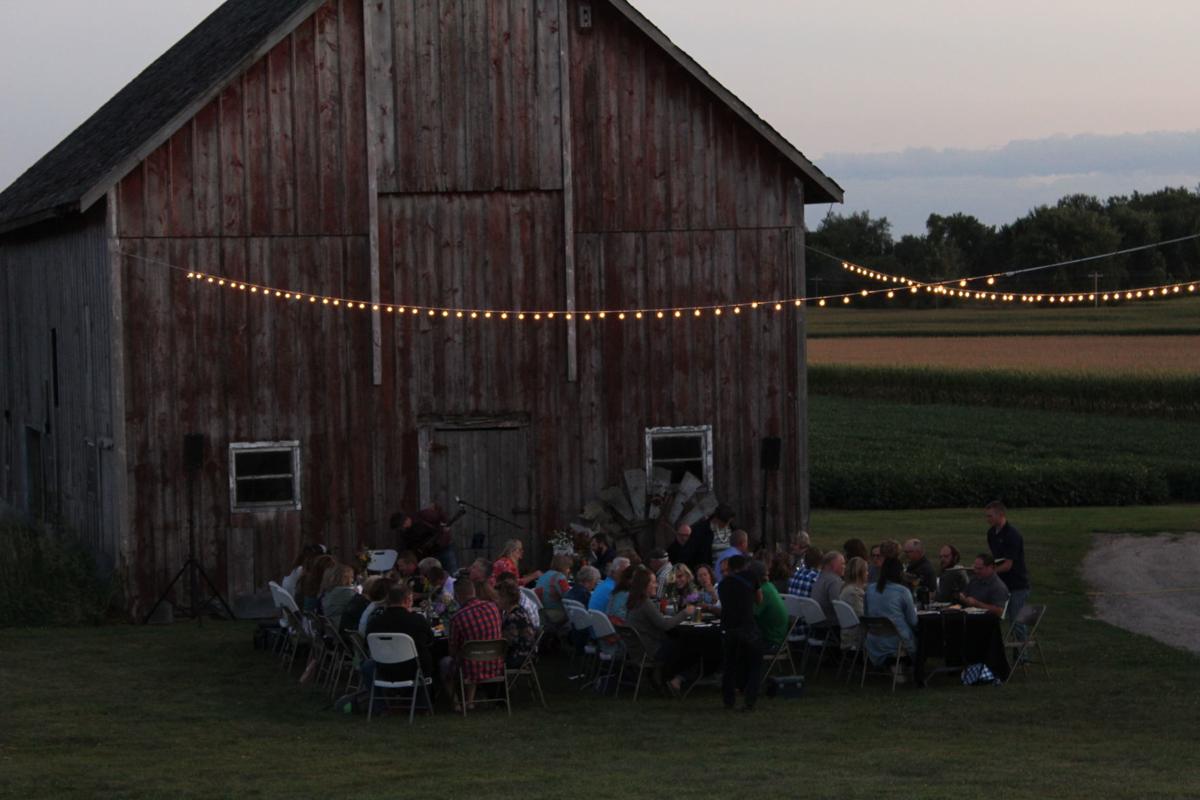 Darkness comes as the guests at the Mitchell County Farm to Fork Dinner enjoy their main course and dessert.

The third annual Mitchell County Farm to Fork Dinner was held on the Amundson Farmstead, located southwest of Osage, with 56 people in attendance.

The event, held on Thursday, Aug, 29, was sponsored by Healthy Harvest of North Iowa. The organization provides community members with an opportunity to converse with local food producers.

The event began first at Taste, in downtown Osage, with attendees then being bused to the Amundson farmstead for the remainder of the evening. Guests were seated at festive decorated tables in the open air. Once seated the evening began with the music of Brian Odeen.

Several speakers then provided brief comments about their involvement with and support of the local food movement. Steve Strasheim, owner of Twisted River Farm in Mitchell, served as this year’s chairman and Master of Ceremony for the event.

“These Farm to Fork Dinners are used to connect producers with other people interested in local food production,” he said. “It’s about connecting local food and community. The benefit of these events is creating more local farms. Five years ago we didn’t have the diversity or availability of product that we have today.”

Aaron Thomas, of Kensett, who ventured into food production several years ago, told attendees how he became involved in the local food movement after watching documentaries on television. Eventually, he and his family moved from a metropolitan area to rural Kensett, where they now produce locally-grown livestock.

Speaking on conservation, Mitchell County Naturalist Chelsea Rowcliffe said, “We have some really amazing farmers in Mitchell County, doing some amazing things. They are thriving while doing it. The butterfly count is up this year and it’s all because of you farmers.”

The hosts of the event, Alec and Rachel Amundson, have long had ties to the farming community. Alec grew up in New Hampton, but had two sets of grandparents who farmed. He went on to obtain a degree in Agriculture System Technology at Iowa State University (ISU).

The farm where the event was held was purchased by Steve and Jolene Norby in 1988. Rachel (Norby) Amundson, who grew up on the farm, attended Osage High School. She went on to obtain a degree in Agriculture Studies from ISU. The Amundsons moved to the farm after the Norbys moved from the homestead.

Commenting on the strong conservation practices the Norby’s initiated, Amundson said, “We strive to create a green cover all year around. Most of our crops are planted into green cover crops. We don’t lose organic matter, but build organic matter.”

“The Norby Family has had a long history of conservation and we are continuing that legacy,” Alec said. “We are dedicated to soil health.”

Steven Smolik of rural Osage recently made the discovery of a lifetime while walking in the Little Cedar River.

St Ansgar fire victim counts his blessings, thanks his rescuers

“Life can change in a flash,” is no longer a quaint saying for Michael Esdohr, of St Ansgar.

Osage couple operates woodworking biz out of their home

Lance and Michelle Bushbaum’s woodworking business, which they started out of their home in Osage a year and a half ago, has taken off mainly …

An innovative move in resurfacing Mitchell and Worth counties' roads has won Engineer Rich Brumm the national spotlight.

Autumn Artistry in Osage brings the sense of 'a new normal'

The 20th annual Autumn Artistry event in Osage took place on Sept. 19, despite the COVID-19 pandemic.

Steve Johnson says the local Farm Service Agency Office will be one of the busiest places in town in the next six months.

Quilts of Valor North Central Iowa presented four quilts to veterans from Osage on Sept. 6 at the Veteran’s Memorial at the Courthouse.

CUSB Bank has been selected as one of Iowa’s Top Workplaces by the Des Moines Register.

ST. ANSGAR – Two candidates for the Iowa Legislature and one for the Mitchell County Board of Supervisors made their case to voters at a meet …

The guests arrive at the Amundson Farm.

Steve Strasheim, owner of Twister River Farm, was the coordinator and emcee for this year's event.

Strasheim speaks to those in attendance at the Farm to Fork event.

Darkness comes as the guests at the Mitchell County Farm to Fork Dinner enjoy their main course and dessert.