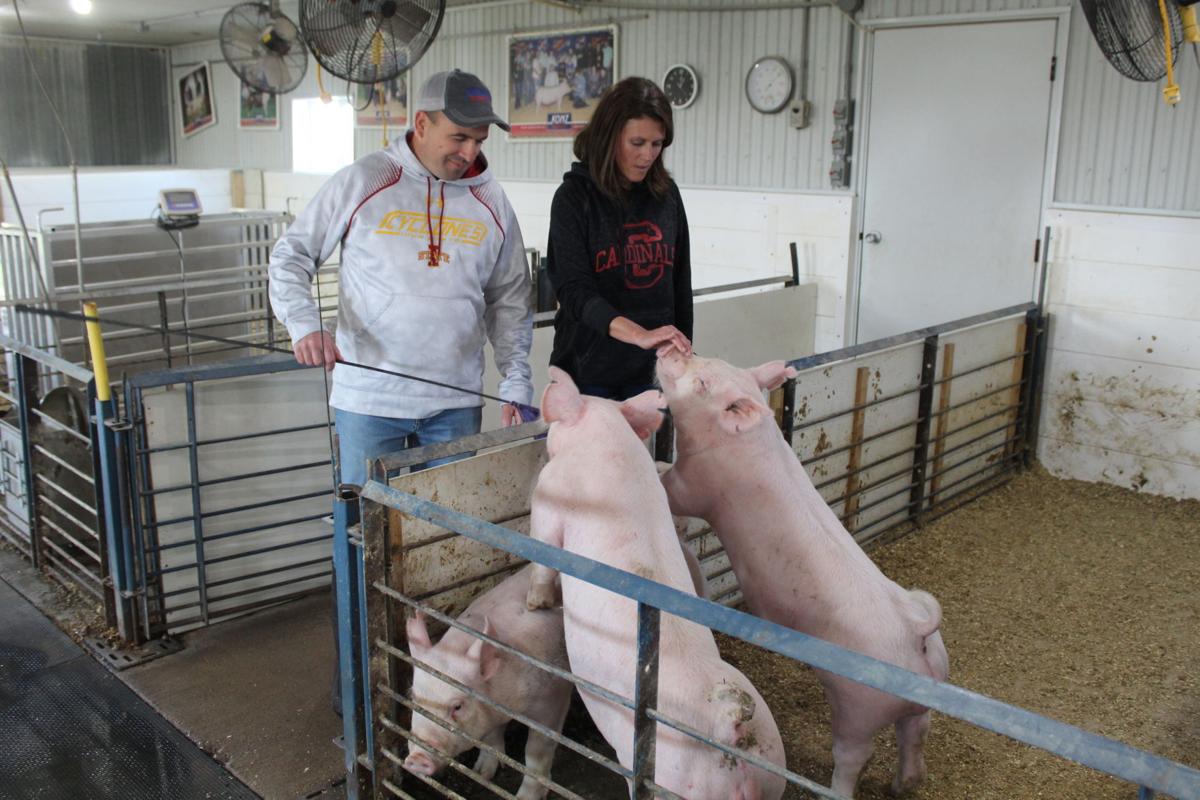 Brian and Heidi Konz pet some of the registered Yorkshire pigs they are raising. 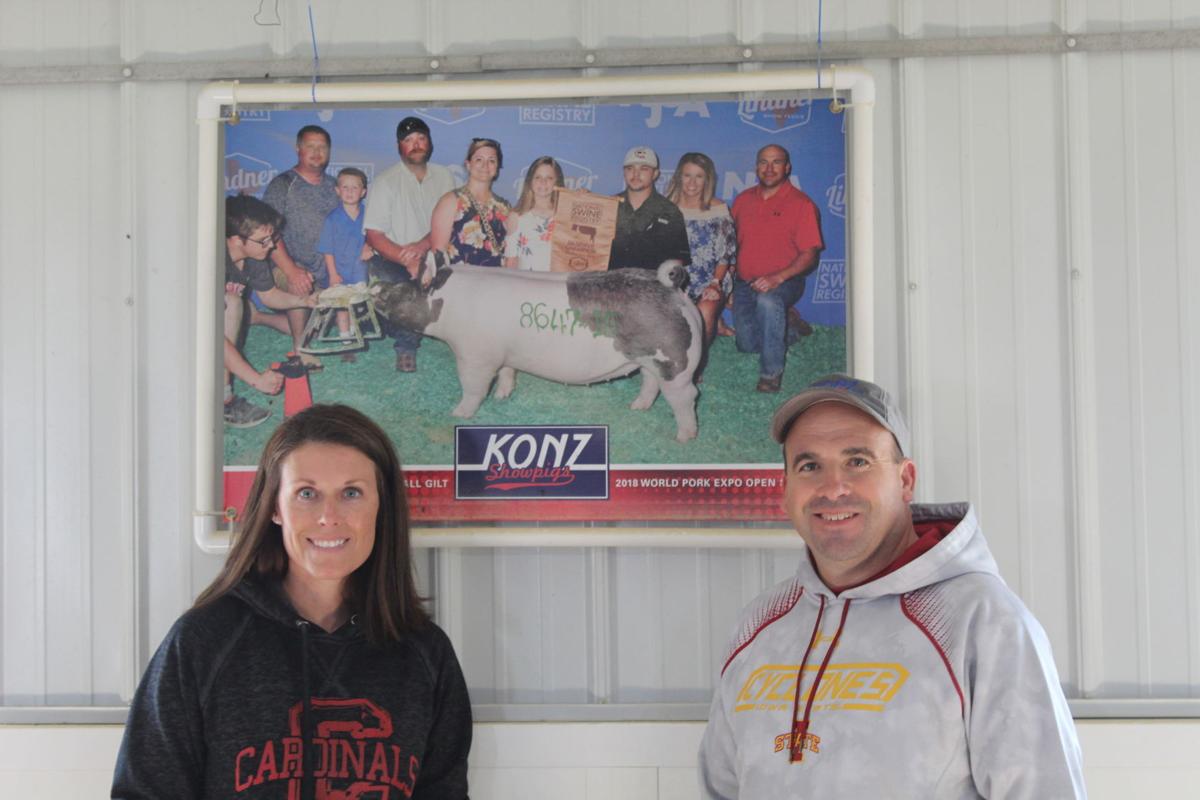 Brian and Heidi Konz stand in front of a gilt produced on their show pig farm. The gilt went on to win three major shows in Texas. 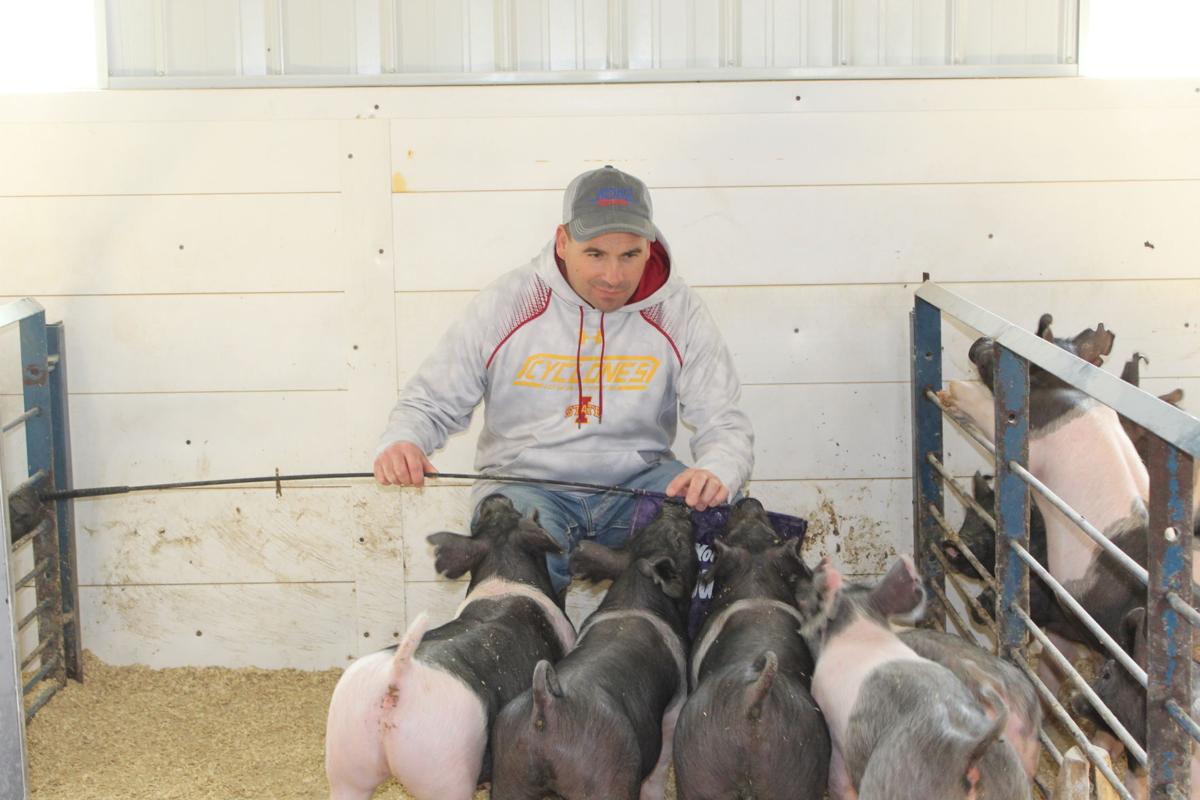 Brian in a pen of his show pigs. 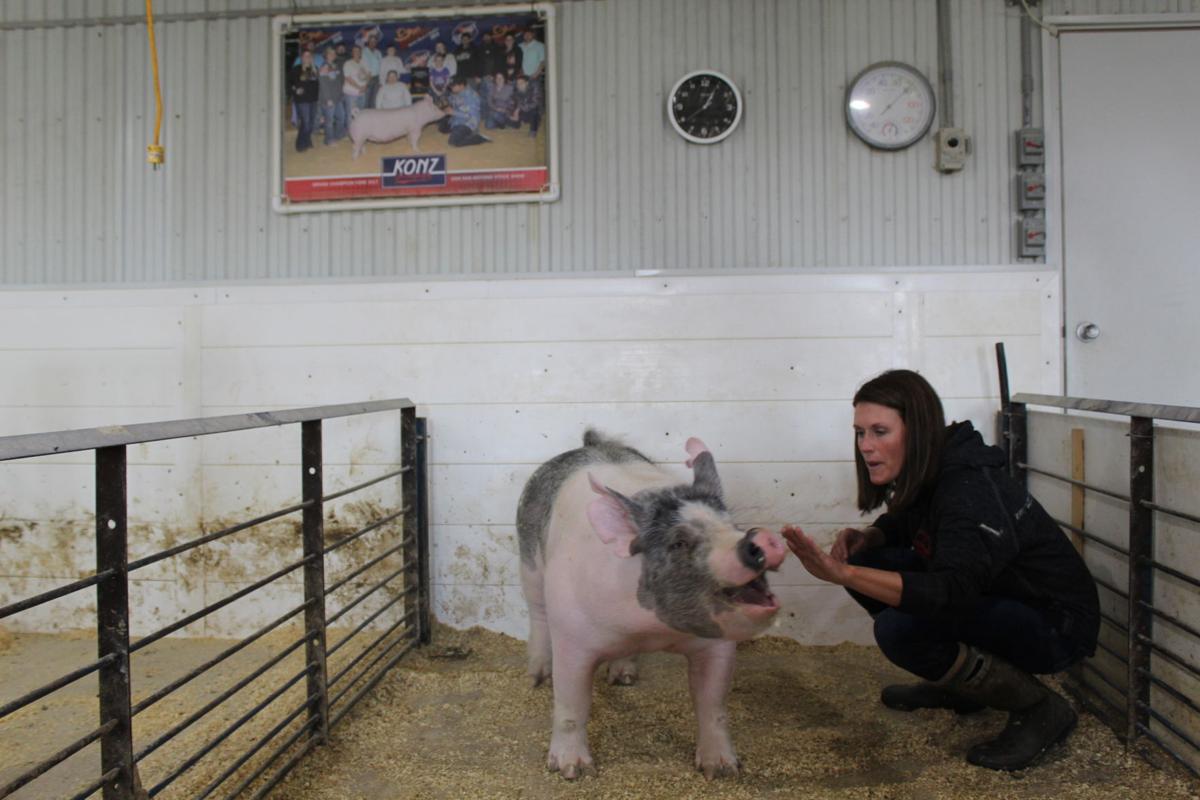 Heidi pets one of their raised gilts. 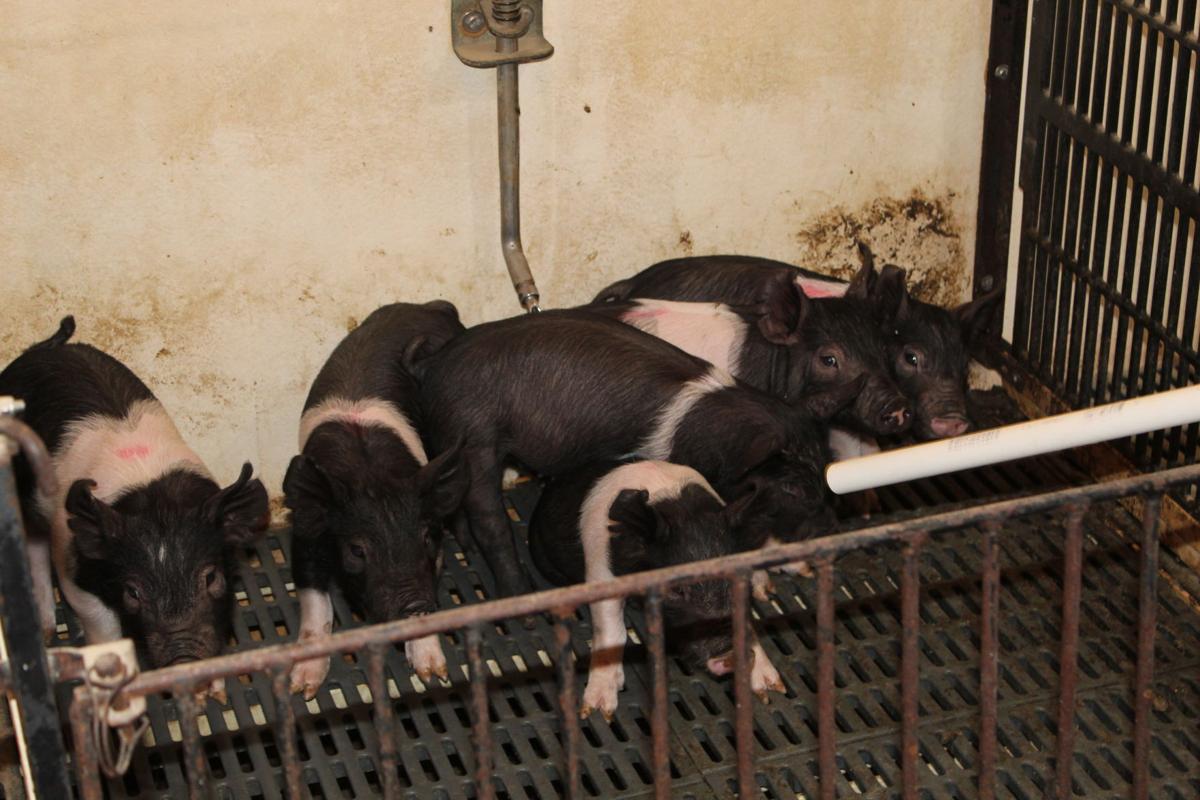 Young show pigs are kept in a nursery after they have been weaned. 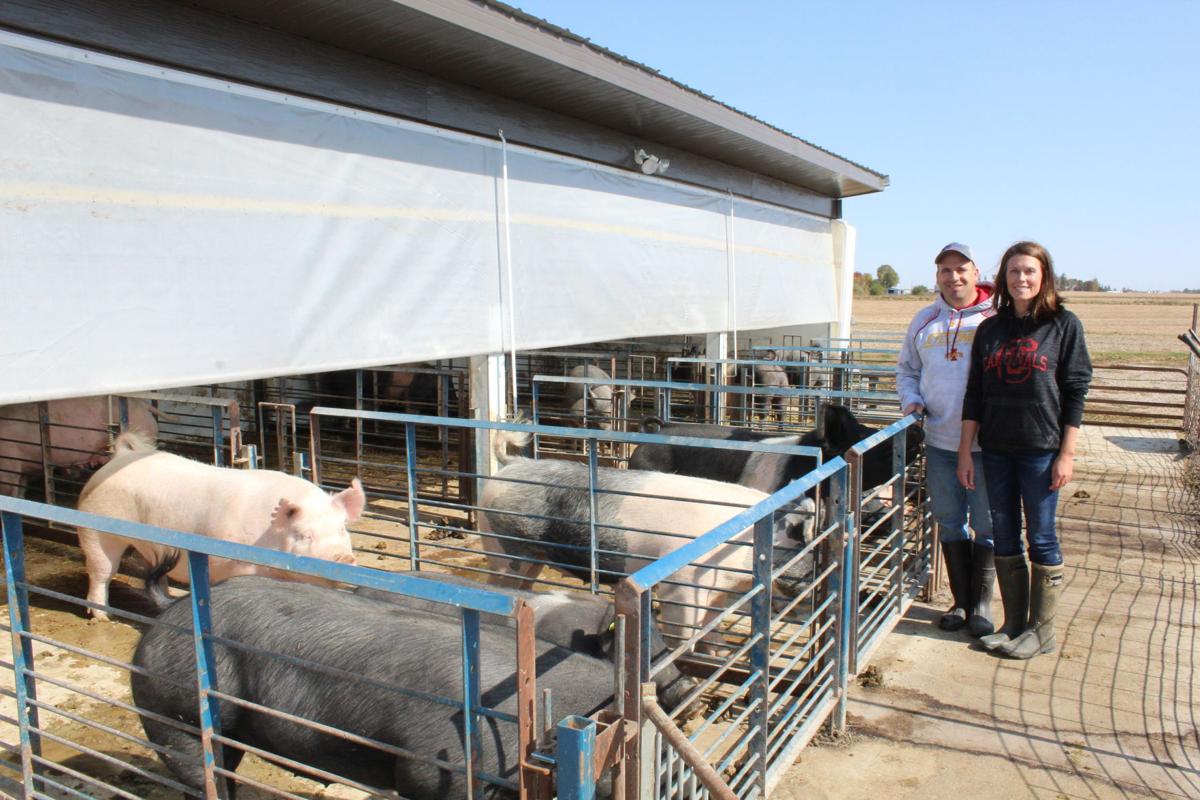 Brian and Heidi Konz stand in front of their gestation house where sows and gilts are kept until they get close to farrowing.

If one reviews the heritage of Brian and Heidi Konz, it’s apparent why their show pig business has succeeded.

Brian grew up on a diversified livestock farm near Red Oak in southwest Iowa, and was active in 4-H and FFA. While at home, his sister showed the overall champion hog at the 1991 Iowa State Fair.

Heidi Greiman was raised on a diversified livestock farm southwest of Garner. Active in 4-H and FFA, she showed livestock at fairs, and her dad and uncle were Purebred Duroc Breeders and exhibited hogs.

Heidi attended ISU and received a degree in Agriculture Studies. While at ISU, the couple met and later married.

Today, the couple and their three sons Dalton, Gage and Tye, operate a successful show pig operation southwest of Garner. Along with the pig operation, Brian works with swine nutrition, and Heidi is actively involved as a board member with Hancock Extension and Outreach.

In 2011, the Konz family purchased a small farm three quarters of a mile west of Heidi’s childhood home. They tore down old buildings and constructed a new home and swine facilities for their show pig business.

In early 2013, they purchased their first Purebred Yorkshire Gilt. That gilt later produced the champion barrow, which was driven by son Dalton at the National Barrow Show in Austin, Minnesota, in September 2013.

Viewing photos of other champion pigs they’ve raised hanging in their show barn proves many of their customers have also had success in the show ring.

One photo shows a gilt sold to a Texas customer. That Yorkshire gilt later won the San Antonio, St. Angelo and Houston Gilt Shows in 2020.

Konz show pigs have also been sold to customers in the Dakotas, Kentucky, Colorado, Georgia, Oklahoma, Texas, Florida, and throughout Iowa and surrounding states.

The Konz operation is family oriented.

“The reason we started is so we could get some good female stock built up so our boys would have something to show," Brian said. "The boys are an important part of the operation. They work in the farrowing house and pig nursery helping with giving shots, and with daily hog care. They are also involved with training the animals to drive."

Heidi, who grew helping her dad farrow and raise hogs in A-shaped hog-houses, plays an important role in the farrowing.

“I have long arms and skinny hands,” said Heidi, who assists in birthing when a mother has trouble. Once she delivers a piglet, she hands them to her husband or one of their sons to dry off.

Those who are familiar with the show pig industry know that being available during farrowing is critical, because show stock sometimes has difficulty giving birth. Aware of these challenges, the Konz family has developed practices to make farrowing easier.

“We don’t breed our gilts until they are a year old. We change gestation rations and pull out all soybean meal and replace it with soybean hulls, and we feed less feed at the end of gestation to reduce protein and feed intake before farrowing," Brian said. "This way pigs don’t grow as big in the uterus, and birthing is easier. We also induce all our mothers so they farrow in 114 days, so the pigs don’t get too large."

The show pigs business isn’t all work. Traveling and participating in hog shows at the county, state, and national level allows the family to enjoy time together.

“It’s like going on a small vacation and kind of a sport for our sons," Heidi said. "You get to see a lot of new people and old friends. It’s good for our kids, too, as they get to work on showmanship."

“I use these show as opportunities to learn about feeding techniques, genetics, and touch base with our customers,” added Brian. “We have put a lot of investment in facilities and genetics these first few years."

Looking at the photos of champions that line the walls of the Konz show barn, it’s evident those investments have paid huge dividends.

Brian and Heidi Konz pet some of the registered Yorkshire pigs they are raising.

Brian and Heidi Konz stand in front of a gilt produced on their show pig farm. The gilt went on to win three major shows in Texas.

Brian in a pen of his show pigs.

Heidi pets one of their raised gilts.

Young show pigs are kept in a nursery after they have been weaned.

Brian and Heidi Konz stand in front of their gestation house where sows and gilts are kept until they get close to farrowing.