For the Osage High School drama department, there is no such thing as a small production. For these students, everything is big time, even in polyester.

This year’s November play was "Mama Mia!" One of the characters in the story was the music of ABBA. The bandmates behind the 1970s hit "Dancing Queen" came from Sweden with a song in their hearts and bell bottoms around their feet.

“I feel supported,” Garrelts said of her fellow directors. “I don’t feel like I’m carrying the burden alone.”

Last year, in a time of great tragedy for those living in Mitchell County nursing homes due to COVID-19, the crowd was limited to families and forced apart by social distancing.

“When half your face is covered, it really changes the story,” Garrelts said. Depending upon the tone of the set, actors either wore blue or black masks. Cloth muffled their voices. They smiled with their eyes only. They could not even livestream Mary Poppins because of Walt Disney Company copyright restrictions.

One reason the directors chose "Mama Mia!" for 2021 was to lift spirits.

“Because it’s been really hard with COVID,” Garrelts said. “Seeing people’s faces is a big deal.”

For three days, the crowd was packed into the Krapek Family Fine Arts Center at the Cedar River Complex.

“It’s very rewarding for us as music and drama educators to see our students work hard and take pride in their performance and feel good about the process,” Kirkpatrick said after the first post-COVID-19 variety show earlier this year.

This is Garrelts’ 10th year at Osage and ninth year as drama director.

“They asked if I wanted to do this, and I was crazy enough to say yes,” she explained.

Appropriately enough, that first show was called, “Who’s Crazy Now?” and it took place in an insane asylum.

“Laurie (Hoeppner) said, ‘Why don’t you help us with the musical?’ and then I fell down the rabbit hole.”

Hoeppner helps tell the story through music. She directs the live band that plays during the show, which includes four keyboards, two percussionists and a guitar.

“She makes sure everyone sounds amazing,” Garrelts said. Together, Hoeppner and Garrelts choose which musical to perform. “Without her, there wouldn’t be a show," Garrelts added.

Preparation for the production begins at the end of the previous schoolyear. That is when directors hold auditions. Students read a few lines. They sing and dance.

“So we can judge all their skills,” Garrelts said. “Obviously we need people singing and dancing in a musical.”

In one week, the roles are cast. Scripts and materials are procured, and the students can begin learning their lines for the following autumn. Rehearsals begin on the first day of school.

Any Osage High School student who wants to audition can. The stage is big enough to welcome all who wish to participate. The tryout portion, however, is more exclusive. This year, 15 students auditioned for the main role of Donna Sheridan.

Older students generally have an advantage over their younger peers. The cast is full of upperclassmen.

“They have more confidence and more experience on stage,” Garrelts said. “Most of the freshmen have never done anything like this before.”

This year, there were around 70 student participants. The cast skewed slightly female.

“One of the reasons we chose 'Mama Mia!' is because it provided a chance for more people to have big parts,” Garrelts said.

Before arriving in Osage, Garrelts was a nanny. After attending the University of Iowa, where she studied comparative world literature and film studies, she accepted a position taking care of a Manhattan family’s children. It is unclear what she used most in this vocation, world literature or film studies. Regardless, working as a nanny was several years of excellent training for dealing with teenagers.

Upon her return to Iowa, she accepted an opportunity to teach English and speech at Osage High School. There, she received one of the best gifts of her life. Though not quite in the spotlight, she could nudge others toward it. It is a tremendous joy for Garrelts.

“Especially the kids invested who want to put on a really good show," she said. "They’re great to work with because they want to do the best they possible can. They’re dedicated to telling a great story for the audience.

“Unlike a lot of sports, they don’t get a game every single week. They get three performances to show off their hard work. It’s a lot of pressure. We try to make sure it goes off without a hitch, but if it doesn’t, the show must go on.”

The show must go on even if an actor ad libs and in the process gets the wind knocked out of him. In this case, the thespian was playing the high school bad boy. He improvised, sitting his chair on a desk. He sat, leaned back and instantly fell. The audience thought it was all part of the performance, with excellent stunt work at that.

“I was freaking out, but everyone else thought it was hilarious,” Garrelts said. “Something always tends to go wrong on stage.”

Stage fright is real. Students understand the fear of speaking in public. Most move past stage fright after enough practice. The younger students struggle. Garrelts uses breathing exercises, but most of that is just to destress after a long day of school. The principal actors center themselves before rehearsal, breathing, focusing on the moment.

“You always want them to do well, so you’re nervous for them," Garrelts said. "You know they know what they’re doing, they rehearse it enough, but you wonder what’s going to happen – Murphy’s Law.”

The show must go on. During an epidemic, that axiom is more apt. And it might as well be to disco music. 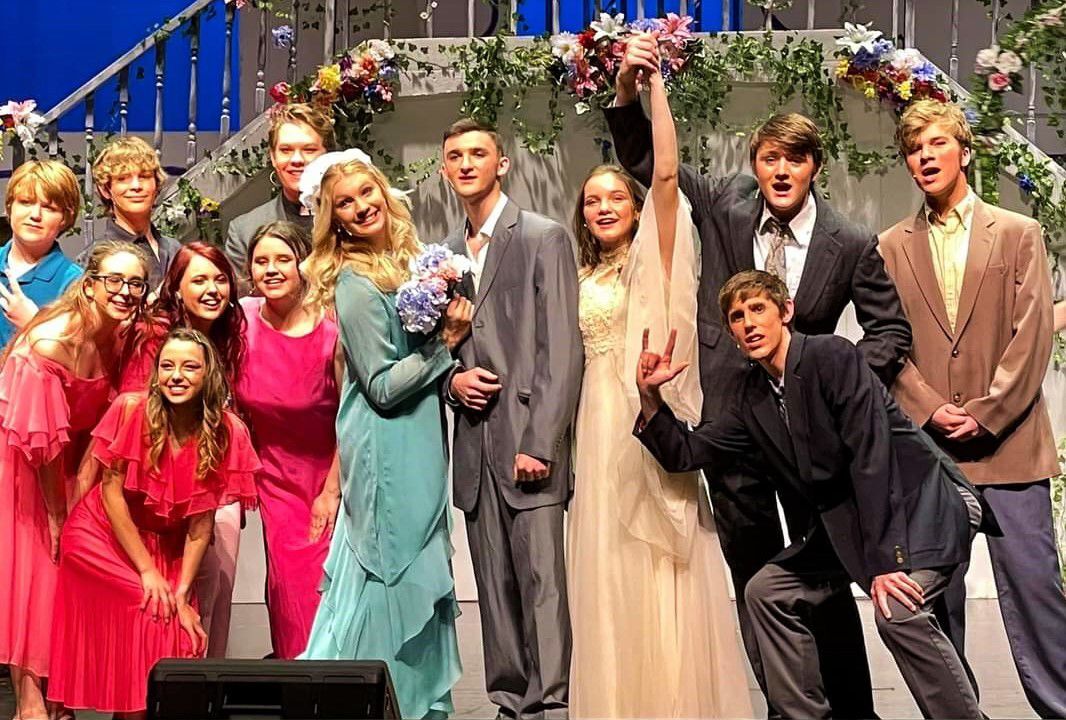 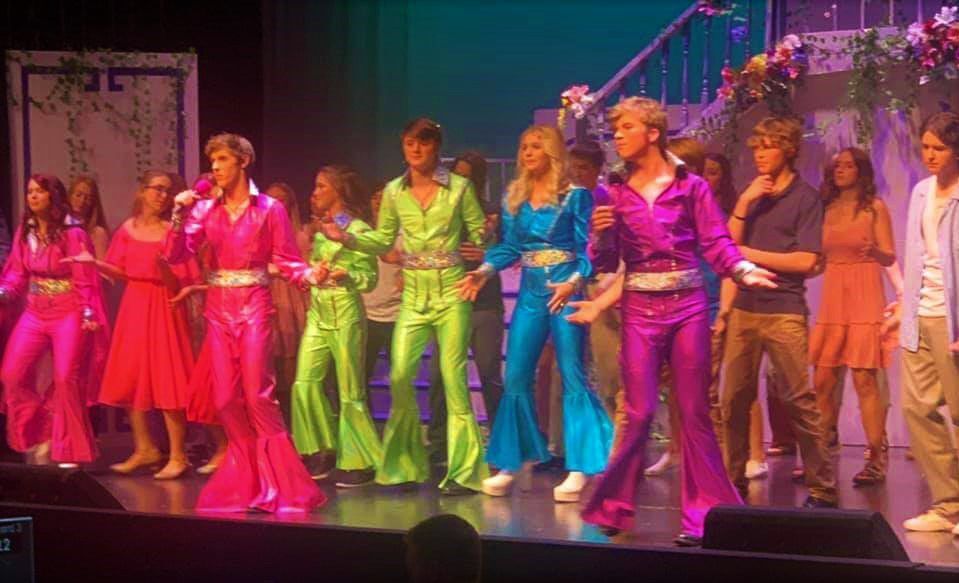 The technicolor cast of Mama Mia! The musical was performed in November by Osage Community High School students. 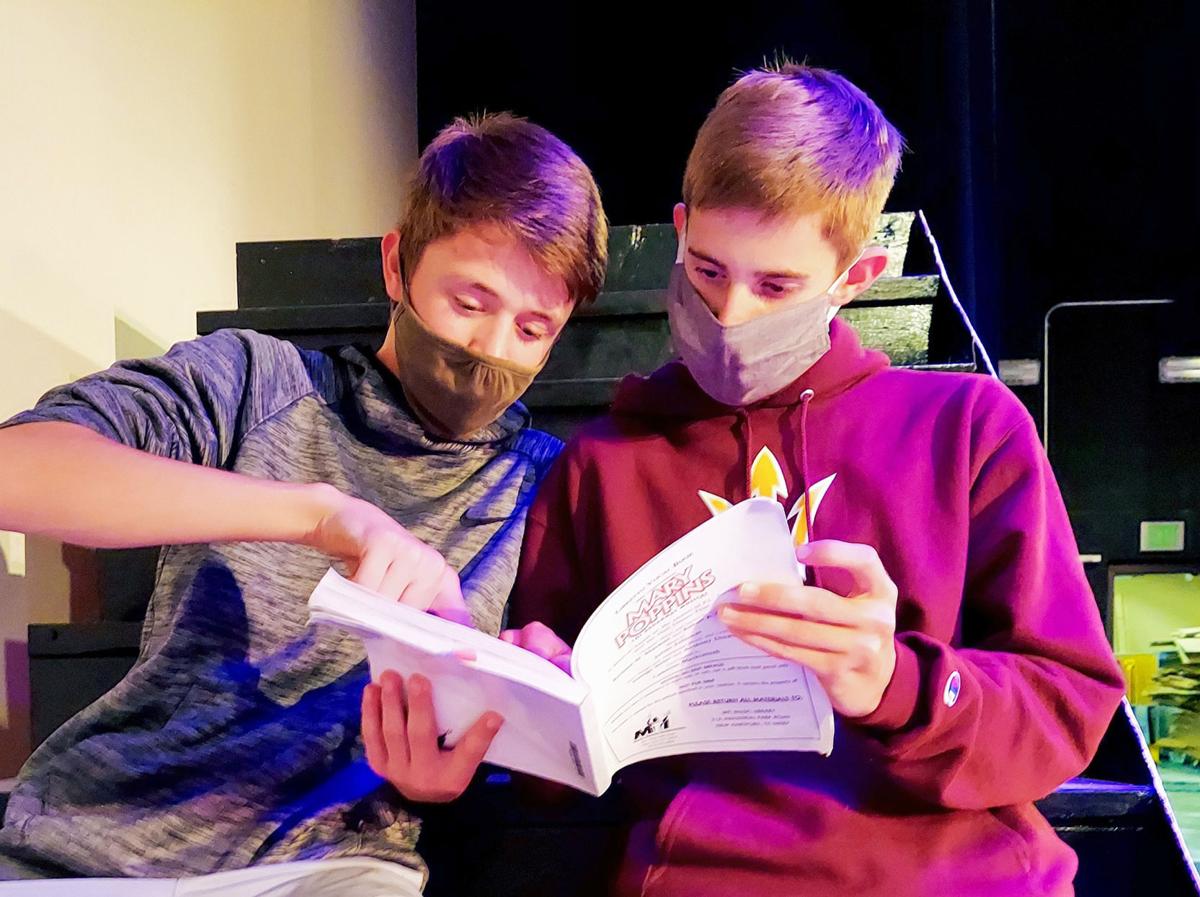 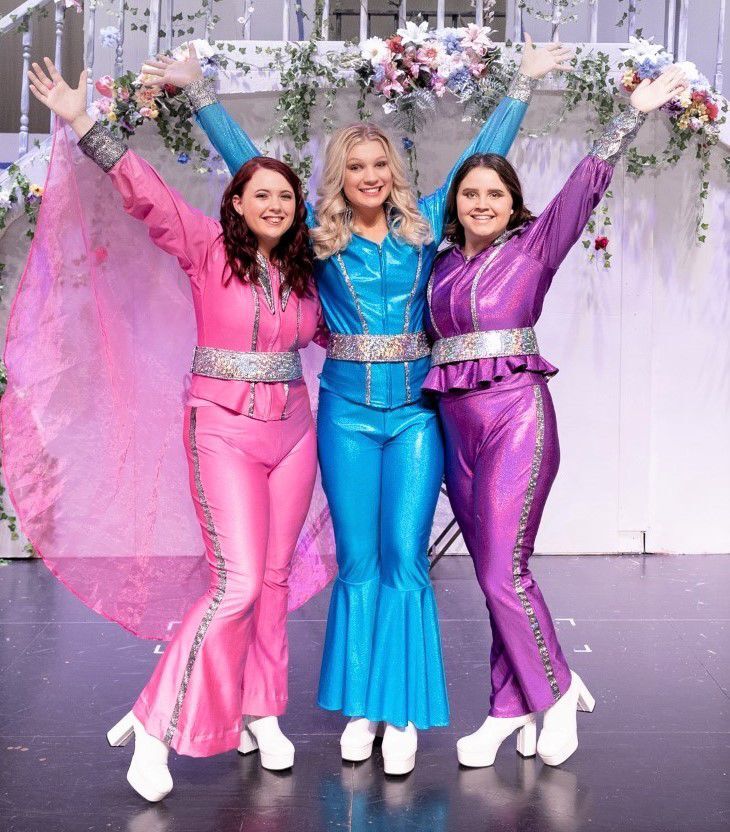 The November production of Mama Mia! was filled with colorful bell bottoms and disco music. Pictured above are Emma Blaha, Claudia Ashenbrenner and Bailey Nasstrom.