Jessica Baldus made her world premiere on national television this week, and  Emmy award winning restaurateur Guy Fieri was her co-star.

The journey began almost two years ago for the Osage business owner, when without her knowledge, a friend’s mother submitted Baldus’ name to appear on Guy’s Grocery Games.

So therefore, it was a real surprise when the Food Network program contacted her.

And at first, Baldus was hesitant.

“Even here on a daily basis, I get the luxury of working behind the wall,” she said of her Osage businesses, "Taste," "Piggyback Smoke Shack" and the "Bakery," which operate under one roof on Main Street. “I love people, I just don’t like being front and center.”

But her friends and family were relentless, telling her she could not pass up the chance. At the same time, it was her family that made her hesitant to leave. She had a business. How would they manage without her?

Their persistence paid off, however, and Baldus relented. After all, the profession chose her from humble beginnings. Her first job in food service was washing dishes at her parents’ restaurant. Before long, she was a master chef.

“Serving up warm dishes on those chilly Midwest [nights],” as Fieri said.

How could she disregard her next culinary calling?

The show was perfect, because on a daily basis she transforms whatever disparate items she can find into beautifully conceived dishes. Local producers drop food at her back door. The morning of the premiere, Baldus received the gift of trumpet mushrooms.

“It’s the challenge of taking different ingredients and creating an experience,” she said.

During the final selection process, it took months being passed from one producer to the next. She submitted photographs, including action shots (Baldus did her own stunts for the show).

In January of 2020, she found out she had been chosen. They would fly her to California in March.

Then the coronavirus pandemic hit, and the world changed. Baldus no longer heard from Guy’s Grocery Games, and she assumed it was over, that they had lost interest or were another victim of COVID-19.

In July of 2020, she received a phone call. The voice on the other line told Baldus the show had indeed come to a halt. However, the cameras would soon be rolling again.

Originally, her husband Jereme was scheduled to travel with her, but COVID-19 took that away. It left her without a safety net.

The day after a family reunion, she was on a plane.

It was a short turnaround, as Baldus landed in San Francisco the first week of August 2020, before being chauffeured to Santa Rosa on set. She described the experience as a kidnapping straight out of a Hollywood movie.

“It was an intense process,” she said. “I was anticipating an itinerary. I sincerely did not know where I’d be going, where I was staying, nothing. If felt like a blinded escapade.”

At one point, she began leaving bread crumbs. She created a secret group on Snapchat, occasionally slipping out a teaser of where she was and what she was doing, as far as her television contract allowed.

“At one point, my chauffeur was driving through this big, long tunnel,” Baldus said. “And I’m Snapchatting, ‘This seems like a weird, mysterious kidnapping.’”

There was an immediate difference from Iowa due to the climate of COVID-19.

“Once I got to California, masks were mandatory everywhere, including on set,” Baldus said. “While there is normally a makeup and hair artist, a lot of that was eliminated because of COVID.”

Baldus and her competitors were not allowed near each other because of social distancing.

While she was not as familiar with Guy’s Grocery Games, she is a big fan of the Food Network, and meeting Fieri was a pleasant surprise. In this show, four chefs compete for a chance to win $20,000. For this episode, they could only cook using items from the frozen food section.

“I’m getting chilly just thinking about it,” Fieri said.

“He has such an intense personality that you see on camera,” Baldus said of Fieri. “He is just as energetic off camera, and very compassionate. We hung out. He was just as interested in us as we were of him.”

Her three competitors were from Dallas, Los Angeles and Tamp Bay, a combined population of 8.5 million. She is from Osage, population 3,500. She was the underdog. They had been to culinary school. She had not, but she wanted to show what a small town girl could do.

Fieri told them individually why they had been selected for the show. He knew Baldus’ name, her husband’s name and her 2-year-old son Harrison’s name. He was interested in Baldus’ business model of having a restaurant and a bakery under one roof.

“Your episode, to date, has been the most challenging episode we have ever planned and filmed,” Fieri said.

He gave Baldus and her competitors a pep talk before the show.

There was a surreal moment as she spoke with Fieri when a grasshopper became interested in one of her feet, and she tried to fight him off.

Later, there was another strange moment during the contest when Baldus had to swing a hockey stick to win a can of chili. The goalie: food critic and television celebrity Troy Johnson.

The show started for Baldus with a fist bump from Fieri. Later, he asked what she would do with $20,000.

Since Baldus was young, she has visited an audiologist for difficulty hearing. Back home, when her staff found out about the show and how much money was at stake, they told Baldus as a joke, “I hope you get hearing aids with that.”

“All joking aside, that also motivated me to go,” she said. “To win some of that cash to get hearing aids.”

A few years ago, Baldus visited her audiologist and found out she would need to pay $15,000 out of pocket for what insurance would not cover.

“What 35 year old wants to admit on national television that she needs hearing aids?” she said.

The day of the shoot began at 6 a.m. and lasted 15 hours, with around four hours of filming. That footage would then be condensed. She tried to guess what would be kept and what would be cut.

“It was a fun job, but it was a job,” Baldus said. “Any given time, there were 15 different camera angles on you.”

The next morning, the four competitors relaxed together, talking about food. They shared stories and advice. They began a messaging group. Later, on the day of the premier, the group kept in close contact.

Four days after filming began, Baldus was back in Iowa with a secret to keep.

For a while, the first rule of Guy’s Grocery Games was you do not talk about Guy’s Grocery Games. The show swore Baldus to secrecy. She was not allowed to tell who won the $20,000 or reveal the names of the three food celebrity judges, who turned out to be Antonia Lofaso, Justin Warner and Jet Tila.

“On a winter day, this is exactly the kind of thing people crave,” Warner said of Baldus’ first dish.

“I actually think you used the chili best today,” Lofaso said of her second effort.

At 8 p.m. on Nov. 3, all was revealed. A crowd had gathered in Osage to find out the results. After the first half hour, Baldus had survived the cutting board, moving on to the final round. In the end, once the scores were disclosed in dramatic fashion, she had finished third.

“It was surreal and really fun to see how they shrunk it all down into such a quick episode,” Baldus said.

And just like that, her 15 minutes of fame were over. However, for Guy’s Grocery Games, minus commercials, it was more like 45 minutes.

For one day, for one episode, Baldus was the star of the show.

The Forest City community celebrated preservation of the former Irish Hospital, turned police station and law enforcement center, and, by next… 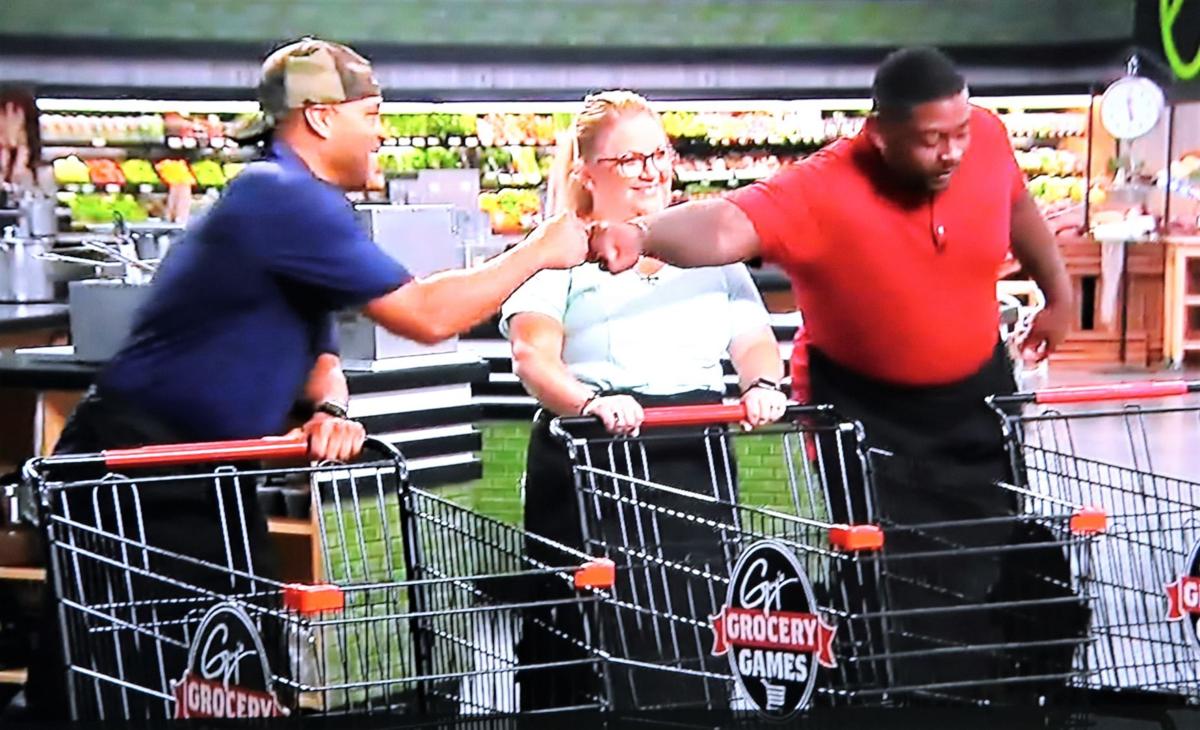 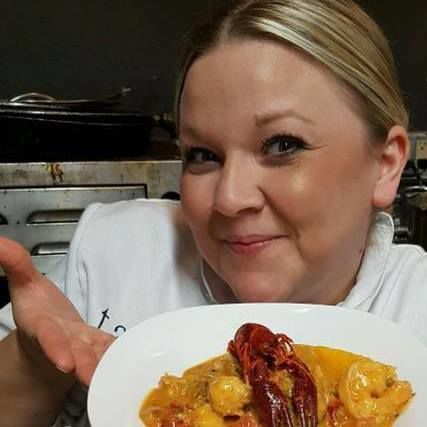 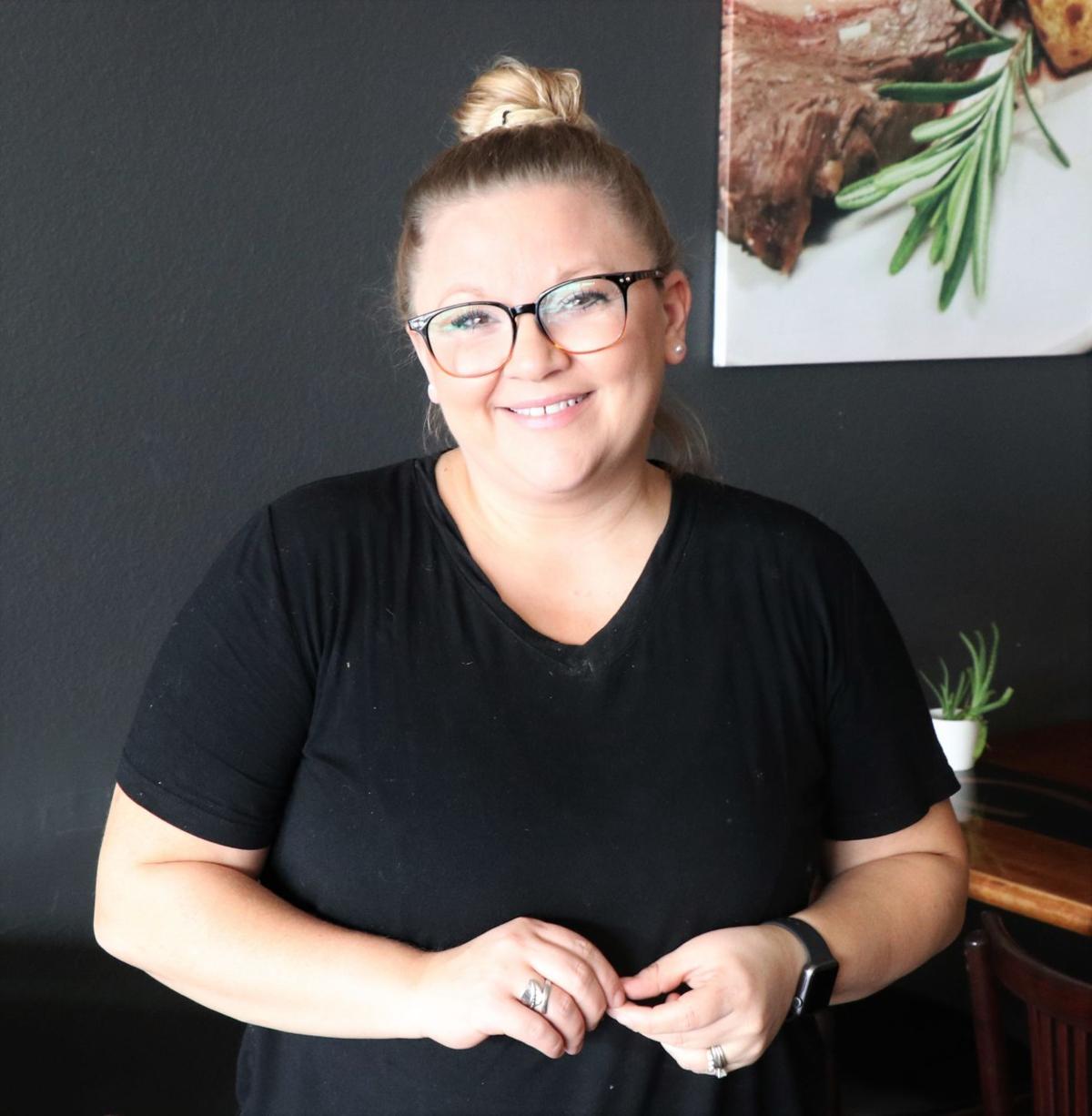 Jessica Baldus in Taste the day of her world premiere.