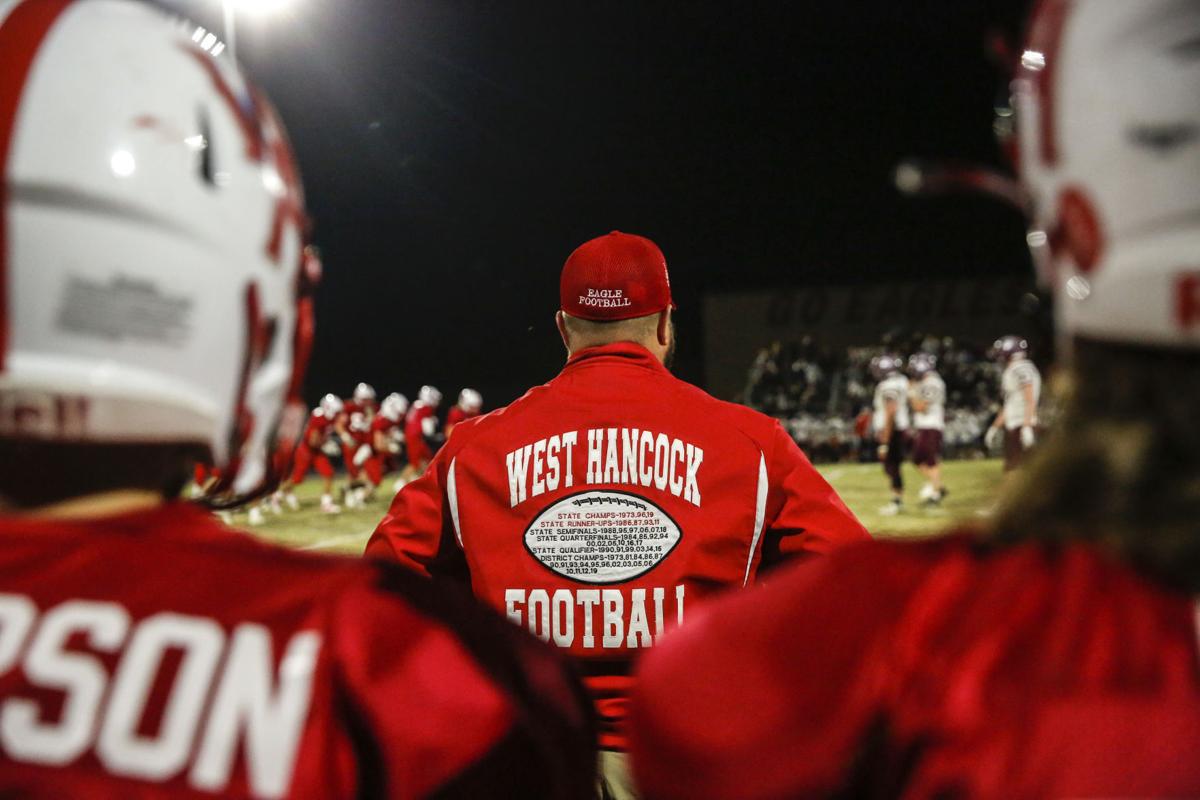 A patch on the back of West Hancock football coach Mark Sanger's jacket shows the number of times the Eagles made it to state. Mark's brother, Kevin Sanger, will be inducted into the Iowa High School Athletic Association Football Hall of Fame, as the All-State player helped lead West Hancock to two consecutive state runner-up finishes in 1986 and 1987. 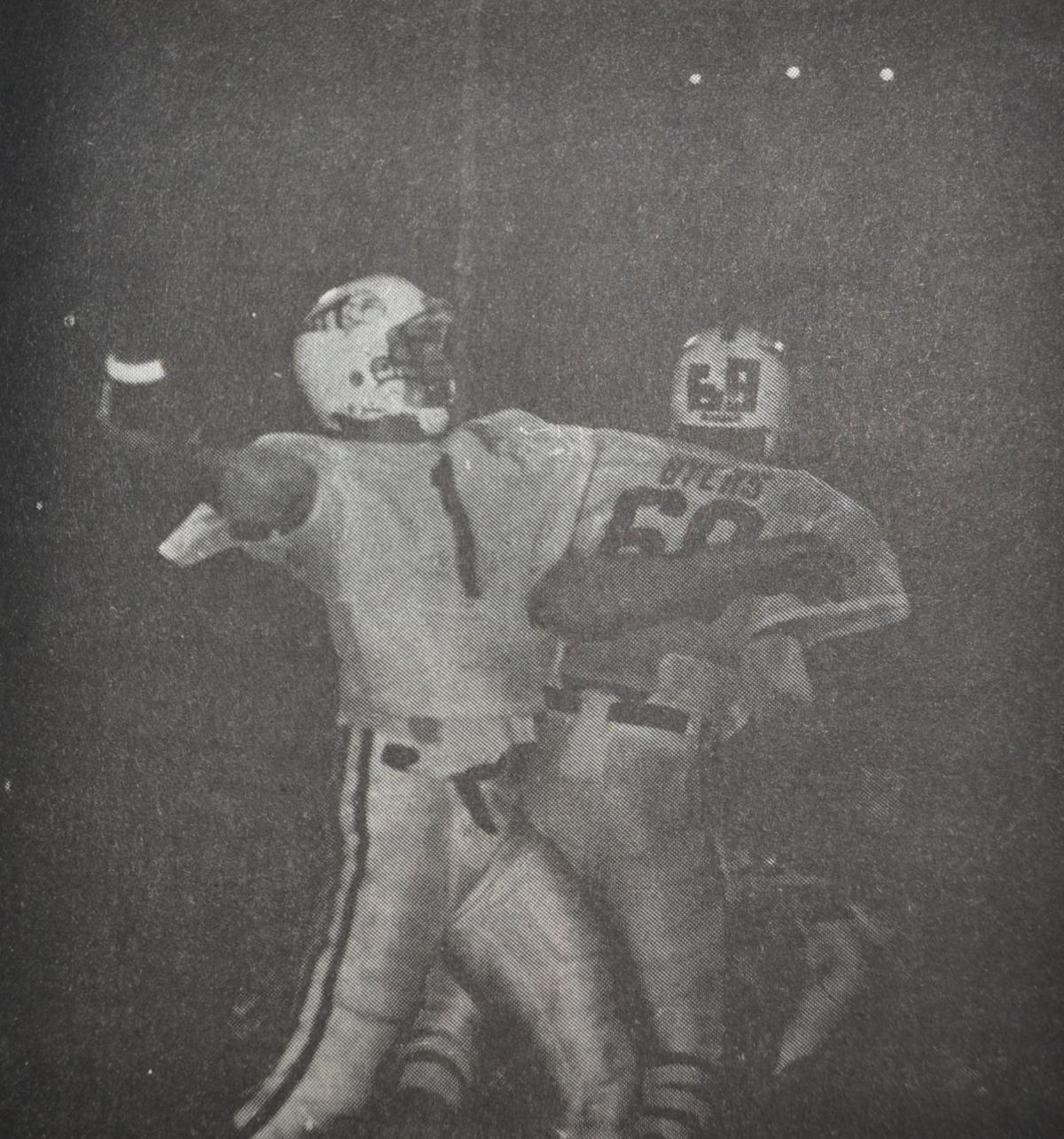 30 years ago: Kevin Sanger loads up to pass as Greg Byers provides protection against Northwood-Kensett.

In the long, successful football history of West Hancock/Britt High School, the program had never had a player inducted into the Iowa High School Athletic Association Football Hall of Fame.

Sanger is the oldest son of longtime Eagles’ head coach Bob Sanger, and brother of current West Hancock coach Mark Sanger, and graduated in 1989, back when the school was known as Britt High School. He was a four-year letter winner, as well as a two-time first-team All-State linebacker.

Sanger was a part of the 1986 and 1987 Eagles’ squads that finished runner-up at the Class 1A state tournament, and also led the team to the state semifinals in 1988.

“I really didn’t have any expectations that it was going to happen,” Sanger said of the IHSAA honor. “I never even thought of it, to be honest with you. I look at it from a program standpoint, we’ve had a lot of deserving players in our program, really good players. I think it's due to a lot of people’s work, loyalty, and dedication to our program.”

After high school, Sanger went on to play football at Central College, where he was an All-Iowa conference honoree in both football and track and field. In his time at Central, the Dutch football program went 36-5, and the track and field program won three league titles with Sanger competing in the shot put and discus.

Sanger went on to coach track and field for Central College for 12 years, and was a football assistant coach at the school for 14 years. After leaving Central, Sanger was an assistant football coach at Minnesota State University for five years in Mankato, Minnesota, where he now lives.

“I’m proud of my brother,” Mark Sanger said. “He is a guy that has done things the right way his whole life. I think he is very deserving of the honor. He was a very big part of our program, and was the first of four boys in our family, too. My dad relied a lot on him as well, and him and my dad are a lot alike. He’s very deserving. He’s a special type of guy, a heck of a good high school football player.”

All four Sanger sons, Kevin, Rickey, Jeff, and Mark, played for Bob, who patrolled the sidelines in Britt for 52 years, and led in the Eagles to three state championships.

Bob, who died in February at the age of 74, put up a career record of 358-160. According to Mark, Bob would’ve been proud, but not surprised, about his eldest son’s induction. The program has been a football talent machine over the past half century, which left the coach with a lot of stories to tell his boys.

To Mark, it is a surreal feeling to see his oldest brother be the first Eagle inducted.

Since stepping away from the sideline in 2017, Kevin has worked as a financial advisor in Mankato, with an office in Britt as well, and is thrilled about the chance to finally put his business degree to good use.

No matter what, Sanger will always have a connection to his hometown and its football team. As the program’s first Hall of Famer, he is now a program legend.

“It’s been pretty overwhelming, the messages and texts I’ve got,” Sanger said. “To be honest, it has kind of brought tears to my eyes, with the correspondence you get, and hearing from people I haven’t heard from in a lot of years. It’s a neat deal.”

The Mason City Mohawks hockey team is shutting down for at least the next three weeks, following new restrictions on sports activities announc…

A patch on the back of West Hancock football coach Mark Sanger's jacket shows the number of times the Eagles made it to state. Mark's brother, Kevin Sanger, will be inducted into the Iowa High School Athletic Association Football Hall of Fame, as the All-State player helped lead West Hancock to two consecutive state runner-up finishes in 1986 and 1987.

30 years ago: Kevin Sanger loads up to pass as Greg Byers provides protection against Northwood-Kensett.