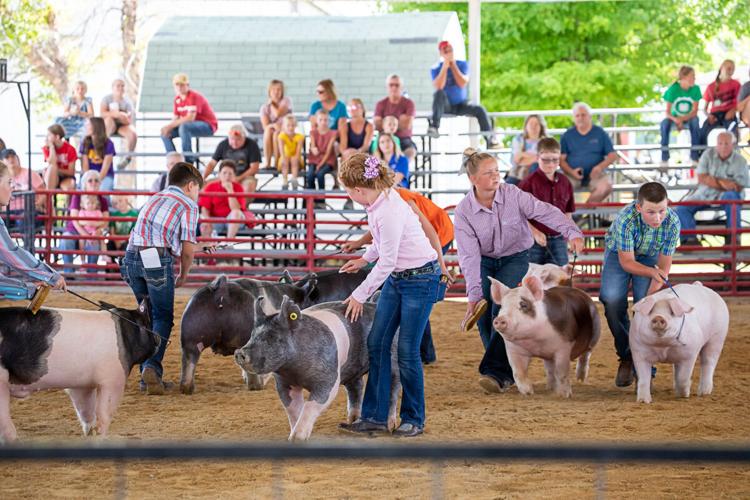 Young showmen and women ready their pigs in the show ring at Britt. 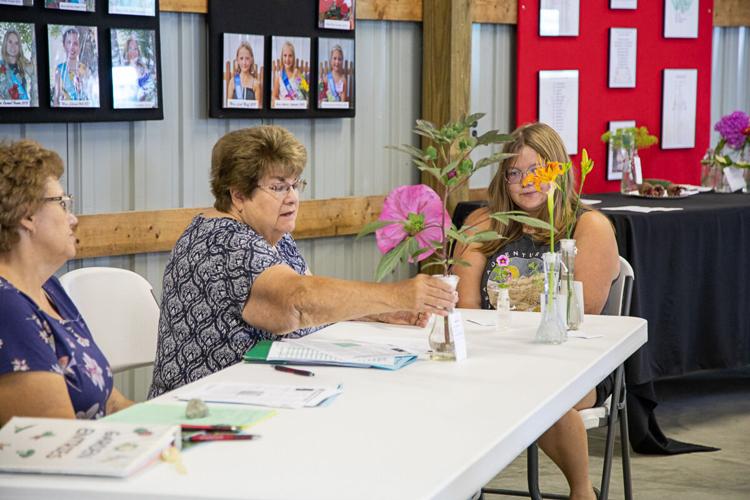 Garden judging is shown at the Hancock County District Fair. 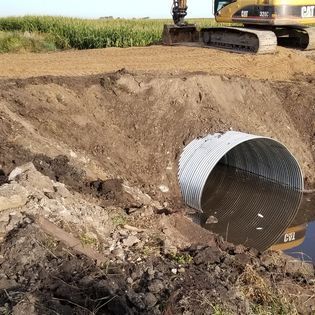 There is typically some sort of drainage district work taking place in Hancock County during construction season. 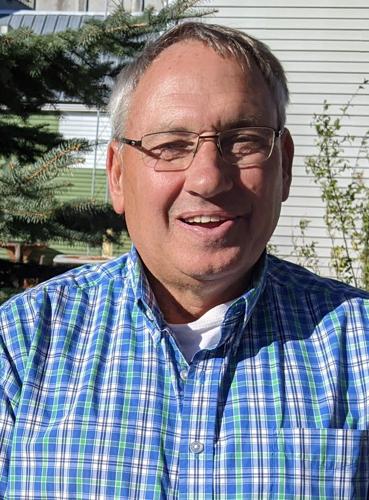 Evan Beshey of Hancock County Ag Society noted that the amount of funding support has not increased from last year despite a lot of improvements being made at the fairgrounds. He provided supervisors with the past year’s financial statements, which also include the race track at the fairgrounds in Britt.

“We appreciate the support from the past,” Beshey said. “It definitely helps us out with a lot of repairs and maintenance.”

Beshey said the biggest upgrade project currently is a three-phase electric update, which will be ongoing for some time. It will bring new electrical connections to barns and other areas on the grounds.

“It’s getting aged,” said Beshey of the electrical system at the fairgrounds. “Last year, we had a critical outage. The other big concern is parking space.”

Beshey estimated that the electric project could cost $60,000 to $70,000 per year “until we get it where we want it. It’s all hinged on the fact that we can get the supplies.”

Beshey said that many weddings, graduations, and other events continue to be booked through the Three Seasons Building. He also noted that there will be a Jeep and camping show this year. He said that more than 40,000 people attended on the last Saturday night of the 2022 Hancock County Fair, calling it a good fair despite a tractor pull rainout.

Beshey also said that a couple of roofs were updated at the fairgrounds in 2022, including the show ring.

“We showed a profit for 2022,” said Beshey, noting that plans for the upcoming year include Tuesday races and Wednesday tractor pulls. Beshey also said that the organization is also trying to book a certain country singer, whose name he did not reveal.

Supervisors took no action on the funding request at the meeting. They will review it and make the final budget-related decision at a later meeting.

The Board also heard from Tom Christianson of Jaspersen Insurance regarding continued steep increases in the county’s insurance rates for the coming year. Christianson said that in talking to municipal carriers, they reported unprecedented weather-related losses statewide in the past year. He said some insurance carriers are going out of business with many insurance chains seeing large losses.

Christianson said that Iowa Communities Assurance Pool (ICAP), which is the county’s insurance carrier, is looking at about a 25% percent increase for a second straight year. He recommended that the board consider EMC Insurance, which he said should have only about a 12% increase this year. He said it is the second year in a row that EMC’s rates have increased significantly less than ICAP.

Supervisor Jerry Tlach noted that when the board chose to go with ICAP, it was supervisors understanding that they were pretty locked in with the carrier. He noted that a lot also went joining ICAP.

Christianson noted that he must adhere to a 60-day written advance notice process, if he is bidding for the county for the coming fiscal year that starts July 1.

“You have to be careful in what year you choose to leave the pool,” Christianson said. “Even if it is a good time price wise, it may not be the right time based on other factors.”

That could include active and anticipated claims, making for a more difficult transition. Supervisors also noted that they are also entering the sixth year with the current provider, would be fully vested, and would have to restart if they left.

“Once you commit to this, you are really kind of committed,” Tlach said. “That was my understanding.”

Christianson agreed to continue to work with the board with the understanding that the insurance rate situation will be more closely evaluated before July 1 draws nearer. Supervisors agreed it would be good to look at options. That will include assessment inspections of county buildings and facilities that are insured. Christianson said it would take him most of 60-90 days in advance to pursue whatever is deemed to be the best interests by the board.

“I want you to know we’re trying to do our due diligence for you and the county,” Jasperson said. “I didn’t want this to catch you off guard.”

Supervisors heard the engineer’s report for a drainage district 8, lateral 4 open ditch replacement and unanimously approved the recommendations of Tyler Conley, Bolton & Menk. The ditch replacement is in Section 19 of Erin Township, south of Britt.

Conley said that he didn’t have any qualms with the quality of work that done in the ditch replacement, but he said that an additional 12-inch tile should be installed to serve lands that flow in from the east end of the watershed there. He said it would adequately serve all 168 acres that drain into the area, according to published documentation. Conley said that the contractor should be able to continue with that tile work, using a different type of tile that is still available, during the 2023 construction season.

Supervisors also unanimously approved a work agreement with A1 Excavating and Drainage of Joice for miscellaneous small project assignments/general open ditch maintenance in 2023. The contractor will provide a machine excavator and qualified operator for an estimated total bid price of $2,275. It is based on estimated costs for 10 open ditch excavations, five bank leveling interventions, and mobilization.

Supervisors also set three public hearings pertaining to work in drainage district 66. They will be held on Feb. 27 with an 11 a.m. hearing for annexation of lands, an 11:15 a.m. hearing on reclassification, and an 11:45 a.m. completion hearing for drainage district 66. Rogness Brothers Excavating of Lake Mills is the contractor for the project work.

Collin Klingbeil of Jacobson-Westergard (engineers) said the drainage district 66 project contract price was $434,970, but increased to $440,745 due to a necessary $5,775 change order that was mostly due to a much-higher-than-anticipated number of tile connections. He said there were about 42 tile connections when only about 20 were expected.

Klingbeil said that $429,620 of work was completed and the county secondary roads department would be paying the contractor directly for a portion of costs that are its responsibility. Also, payment of a small retainage has not yet been approved. There were no crop damages as the project began after the fall harvest.

On Jan. 16, the Forest City council accepted the resignation letter of Chad Reece from the Parks and Recreation Board he served for 25 years, …

At the Jan. 9 meeting of the Osage City Council, Joe Krukow was announced as the new fire chief for the Osage Fire Department. He replaces the…

Young showmen and women ready their pigs in the show ring at Britt.

Garden judging is shown at the Hancock County District Fair.

There is typically some sort of drainage district work taking place in Hancock County during construction season.