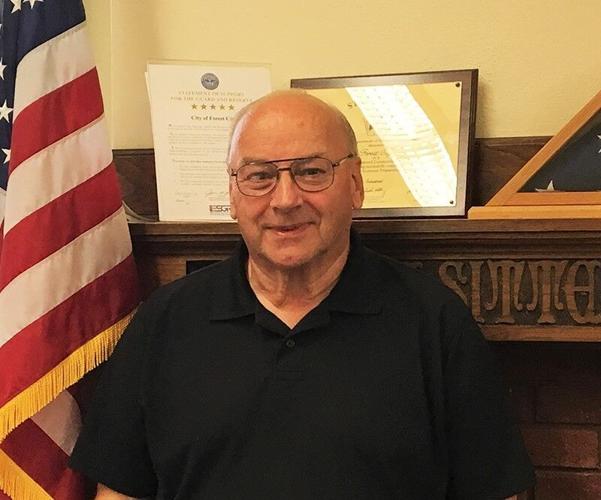 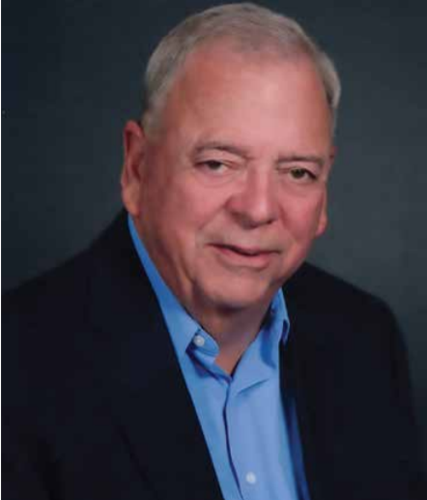 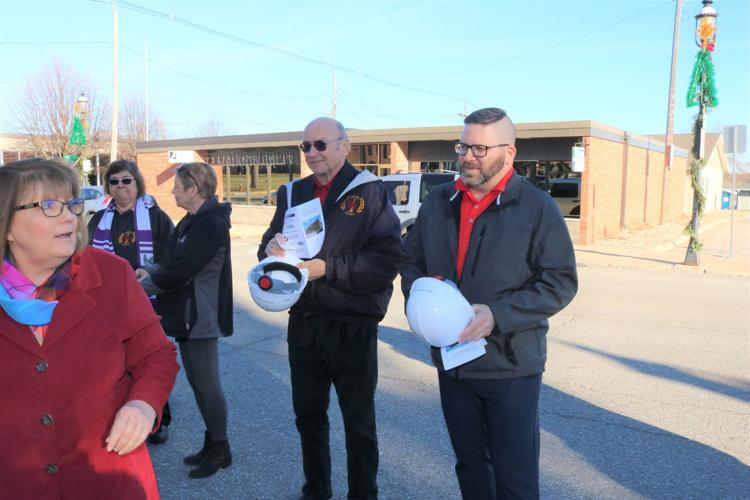 Barney Ruiter is shown at center, representing the City of Forest City at the groundbreaking of the Irish Hospital Apartments in November 2021. His wife Barb Ruiter, is shown behind the shoulder of FCED Director Beth Bilyeu, who is pictured at left. 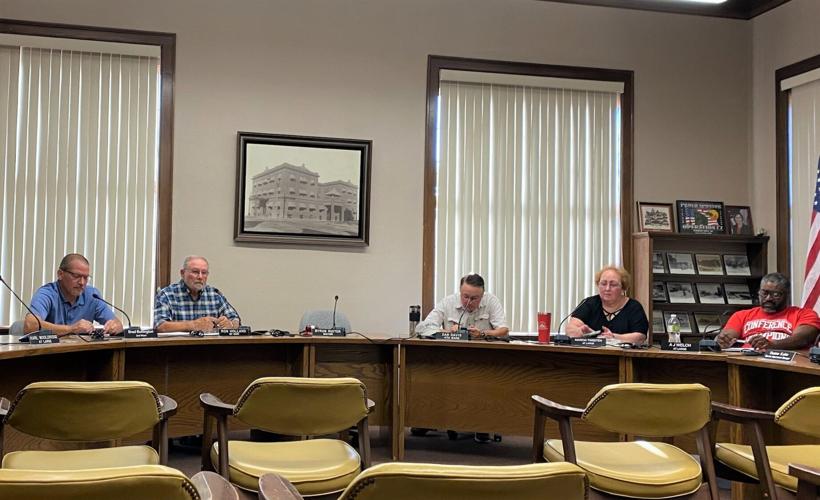 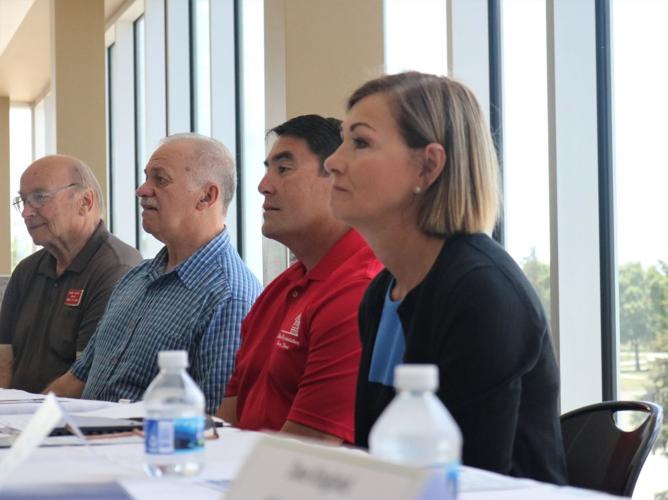 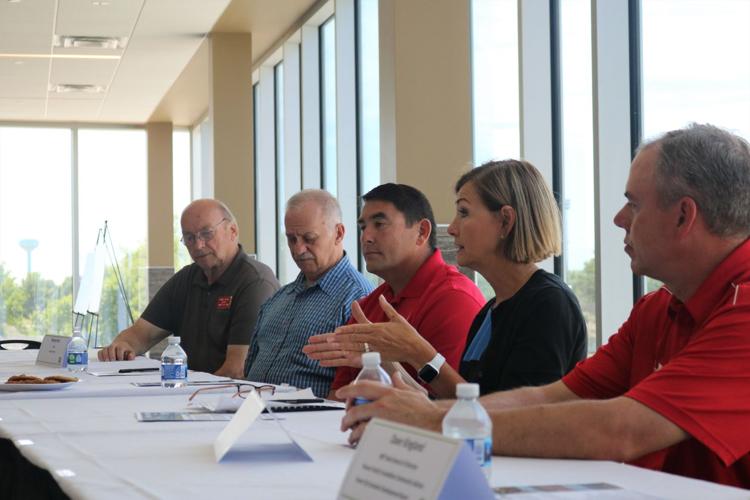 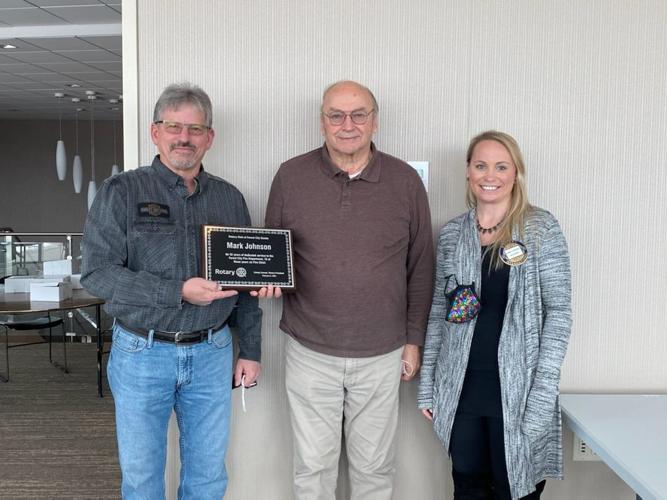 From left, Forest City Fire Chief Mark Johnson was recognized for 35 years of service, 15 as fire chief, by Forest City Rotary on Feb. 2. Barney Ruiter and Linsey Current presented him with an award plaque.

Like all of you, I was deeply saddened by the sudden and unexpected death of Mayor Barney Ruiter. As news of Barney’s death spread, it was like a pall of black smoke hung over the community. I think everyone in the community liked and respected Barney.

How do we best define this man’s life? What is his legacy? I think I can best answer those questions by quoting from the commencement address I delivered a couple of years ago at Waldorf University:

“I also want to talk to you about success — what it is and what it isn’t. It’s not about making a lot of money, becoming CEO of a large corporation or reaching the pinnacle of social status. The real definition of success is a life and work that bring personal fulfillment and lasting relationships and make a difference in the world. It is being the best person, best spouse, best parent and best friend that you can be. Nelson Mandela said: ‘What counts in life is not the mere fact that we have lived. It is what a difference we make in the lives of others that will determine the significance of the life we live.’”

Barney was a native of Forest City, having graduated from high school here in 1967. Barney worked for the city for 43 years and for 40 of those years he was the superintendent of streets and sanitation. As far as I could tell, he did a flawless job in this position. I recall many winter nights of heavy snow, but Barney and his crew always worked through the night and everything was cleared by morning. He expected his people to work hard, but he treated them fairly and with compassion, and they all liked him.

I can safely say that there will never be another mayor like Barney. Based on our conversations, I concluded there was virtually nothing about Forest City that Barney was not fully knowledgeable. Barney worked just as hard in retirement as he had when he was employed, with the major difference being that he was only paid a nominal salary. But money was never the driving force for Barney. Rather, he loved his community and wanted his legacy to be that he left Forest City better than he found it. Let there be no doubt he succeeded! But Barney was a very humble man, and he would no doubt be embarrassed that so many great things are being said about him now.

I knew Barney for many years, but it is only over the last several years that we became really well acquainted as we served many of the same organizations and clubs. We made it a point to usually sit together at Rotary Club meetings. As you might guess, we often talked about community matters, but we also got better acquainted on a personal level. We discovered that we had both gone through Army basic training at Fort Polk, Louisiana, and that we both hated the place. We talked about our families, and I could easily sense his love for Barb and the rest of his family. He was so very proud of his granddaughter, Lilly. Lilly just recently finished her freshman year at Drake University and Barney’s face lit up when we talked about her being named to the dean’s list both semesters.

I could go on and on. I don’t think it’s possible to think of the Legion in Forest City without thinking of Barney. I really cannot recall any Legion event where he was not in attendance. He was always willing to give of himself.

He has left us far too soon, but we need to focus on how well he lived, not how long he lived. Let’s go back to my definition of success. Was he successful? Oh my, was he ever! Let us thank Barney for a life well lived!

Raymond Beebe served as vice president, general counsel and secretary of Winnebago Industries for 38 years. He is currently president of the Forest City Education Foundation and board chair of the Waldorf University Foundation.

Barney Ruiter is shown at center, representing the City of Forest City at the groundbreaking of the Irish Hospital Apartments in November 2021. His wife Barb Ruiter, is shown behind the shoulder of FCED Director Beth Bilyeu, who is pictured at left.

From left, Forest City Fire Chief Mark Johnson was recognized for 35 years of service, 15 as fire chief, by Forest City Rotary on Feb. 2. Barney Ruiter and Linsey Current presented him with an award plaque.