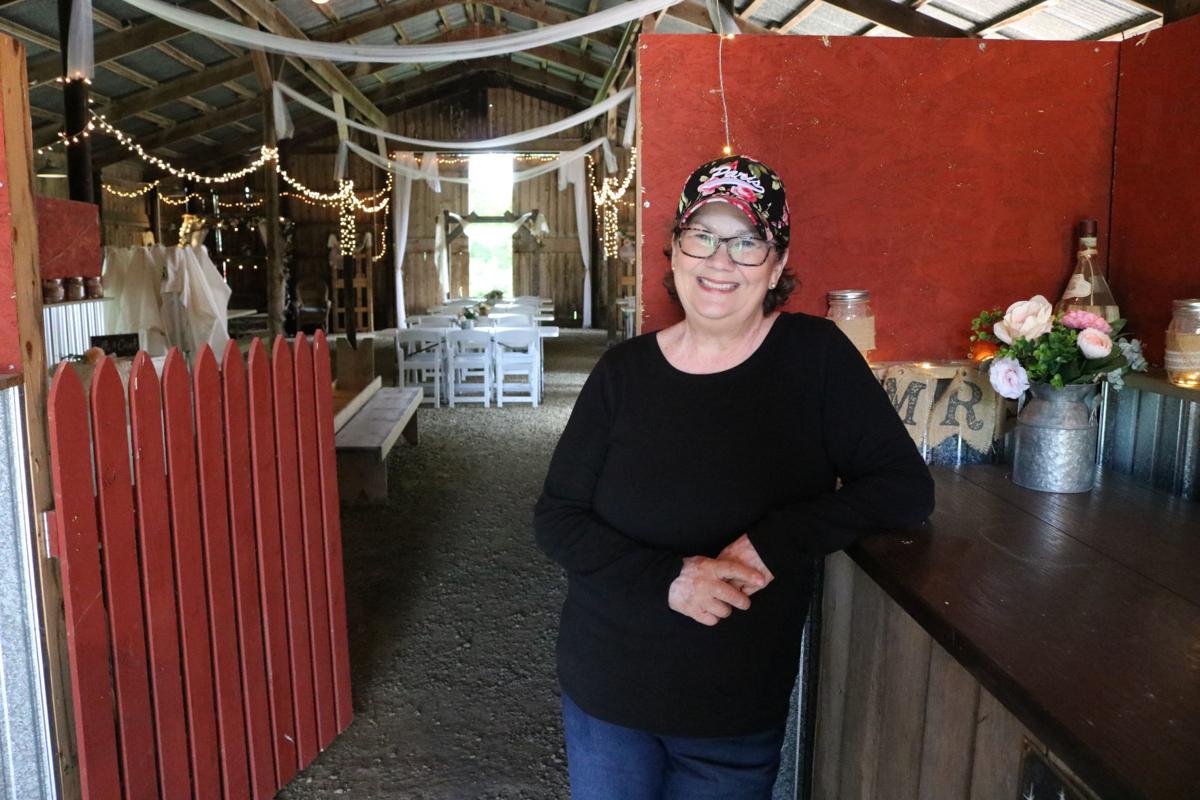 Mary Lovstad, owner of Farm Girl Weddings, leans against a bar in her barn where she hosts wedding receptions. 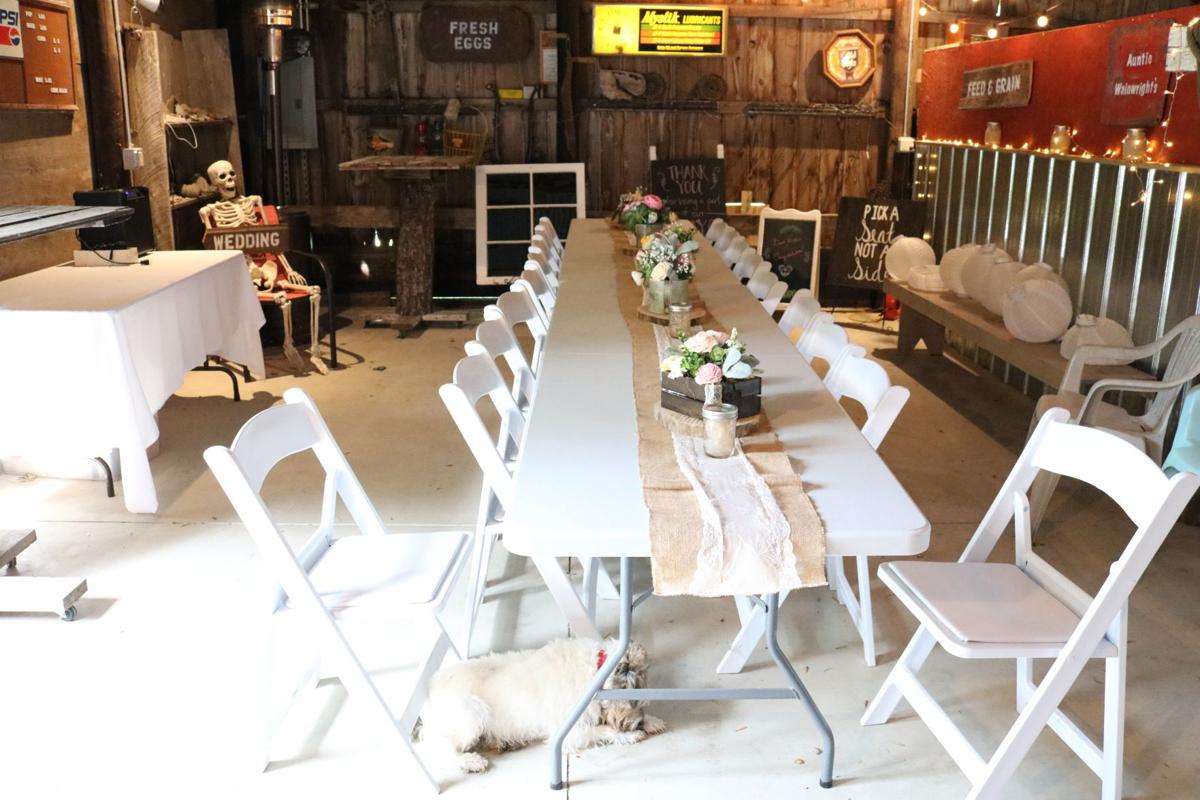 Bernie the wedding dog sleeps under the table stored in the barn while between weddings. 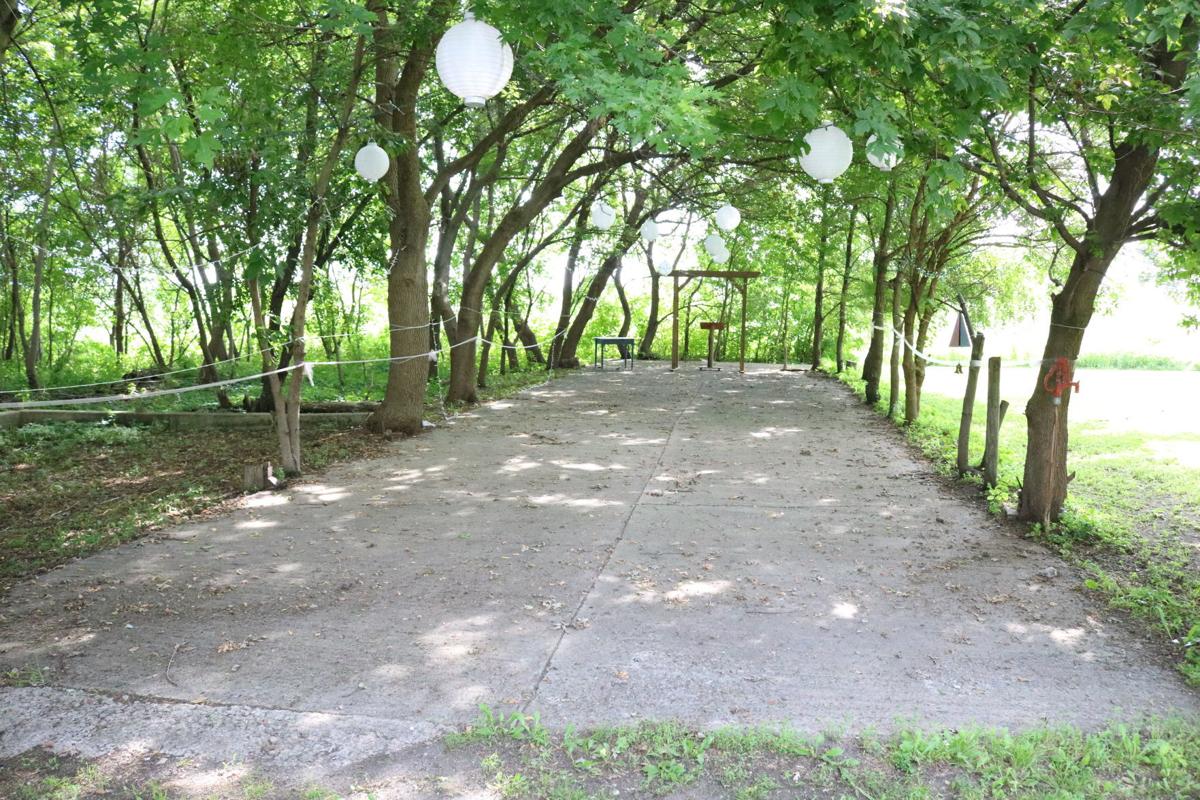 Couples can have their wedding ceremony in the woods. Lovstad recently had a Japanese-themed wedding there. 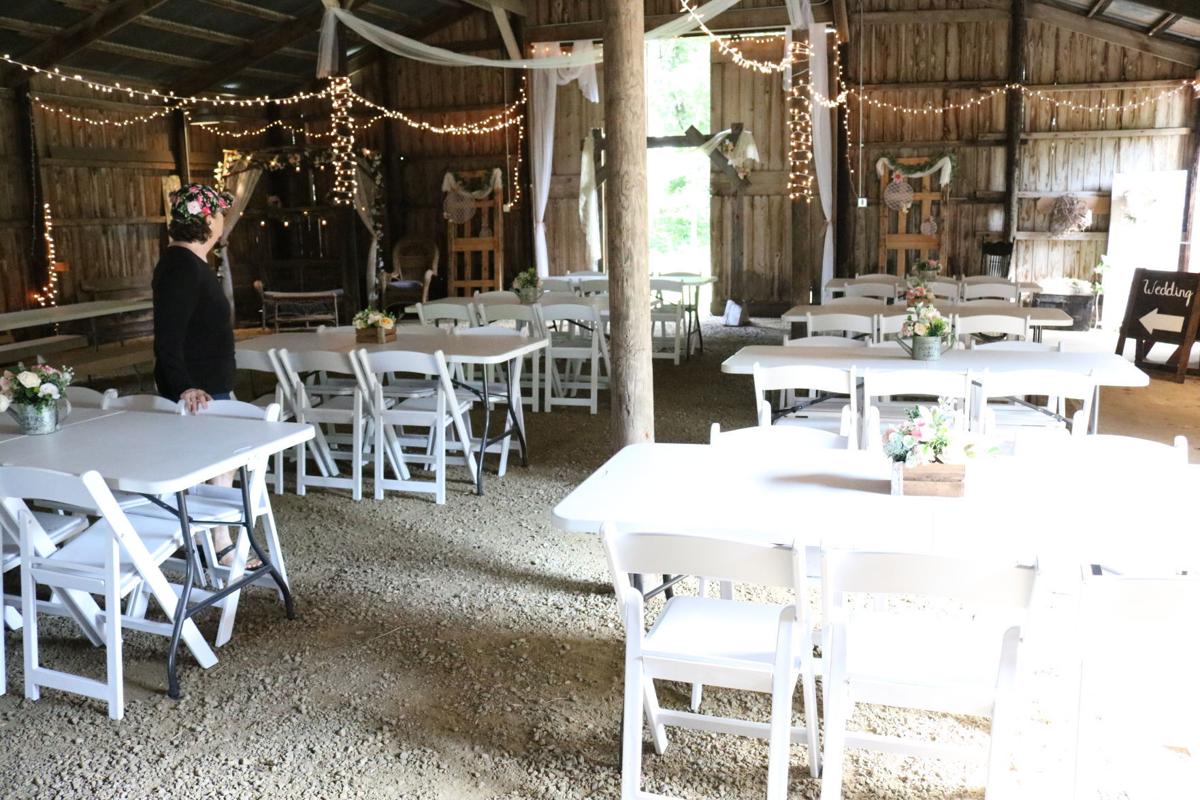 Lovstad stands around the tables and chairs stored in the barn until the next wedding.

Looking for a more "rustic" location to have your wedding? If so, Farm Girl Weddings is your destination, just outside Forest City.

Farm Girl Weddings has been in business for more than four years, offering complete packages to its clients, from wedding planning, to setting up, to even conducting the wedding.

Owner Mary Lovstad said she had her first official wedding in 2015, though she’s had several in the past.

“The farm’s been in the family 147 years, so I was trying to find something fun to do here,” Lovstad said. “So I thought weddings, those are fun. I’ve got a barn.”

Before she started her wedding business, Lovstad taught information technology and project management at North Iowa Area Community College until it was scaled down by the state. She then worked at TeamQuest until they sold the company and also scaled down.

Lovstad then started writing a food blog, Farm Girl Cooking, and tried to write a cookbook, which is currently still in the works.

Lovstad said she decided to turn the family farm into a wedding venue after she and her husband went to his nephew's wedding at an apple orchard and thought, "We could do this."

Lovstad said her goal is only to do 10 to 12 weddings a year, and this year she’s at 11 weddings so far.

Though she does a lot of pre-planning with the bride, the week of the wedding Lovstad said she gets the venue prepped and decorated with the help of 12 to 15 people, including her two daughters.

She only does weddings in May, June, September and October, because it’s a farm and it gets hot and buggy during the summer and she doesn’t have air conditioning, Lovstad said.

“We are rustic,” she said. “So the people who come out here really do want that rustic feel to it.”

Though she didn’t expect it, Lovstad said her farm has become a destination wedding venue, getting people sometimes as far as Faribault, Minnesota, Chicago, Illinois and Omaha, Nebraska, as well as Waterloo, Des Moines and Ankeny.

“I still get local ones, but because I do it a little different than everybody else does – I don’t just do a venue. I do packages…,” Lovstad said.

The wedding packages Lovstad offers include decorations, catering, setup, venue and even an officiator.

“So you can just show up, be pretty, drink mimosas with your girls and have fun,” she said.

Next year, Lovstad said she wants to try doing something called “tiny weddings,” called micro weddings or mini weddings, which are full weddings for about 20 people with a nice ceremony and reception during the week.

“I’ll get my officiate’s license and do the tiny weddings during the week, if I get a few of them,” she said.

Lovstad said though she has an officiator whom she works with often, most of her couples get their own officiators, which can be their boss or their brother-in-law.

“I think my favorite one was the brother-in-law who read from the Book of Keanu Reeves,” Lovstad. “…Because it’s nontraditional out here, they do about everything.”

Because she’s has collected a variety of theme weddings from Renaissance to cowboys to destinations, Lovstad said her market seems to be completely different from the typical wedding market.

Currently, her venue can hold up to 150 people, though her weddings are typically 75 to 100 people.

Lovstad she thinks of them as kind of camping weddings with her giant Jenga and other games, kids area, fire pits, s’more bars and hot dogs.

“It’s very relaxed…They do a lot of things you’d do when you sit around the fire pit, although they do dances out here and have DJs,” she said.

Lovstad also gives her clients the option of simply building a playlist and having it play on her sound system in the barn.

Guests can also choose the location of the ceremony from the front of the barn, her butterfly garden, her late spring garden and a shaded area in the woods.

Hands-on trade skills learned as a young man have paved the way for entrepreneur Johnny Rodriguez, owner of JR Renovations, of Forest City.

The Dean Welsh VFW Auxiliary Jan. 20 meeting will be held at the Britt Veteran's Building at 1:30 p.m. Following the meeting, light refreshmen…

On the street: Thoughts on the troop deployment to Iran

We spent some time out of the office asking people in the Forest City area: What are your thoughts regarding the deployment of thousands of Am…

The Forest City Community School District's online auction for pieces of the high school gymnasium floor, which has been in use since 1977, is…

Winnebago County Board of Supervisors on Jan. 7 received an annual report from County Social Services, its provider of mental health and disab…

Although it is too early to know exactly who the new Forest City Chamber of Commerce executive director will be, with the recent resignation o…

Titonka Savings Bank has pledged to donate $1,000 to the Forest City Elementary School.

Forest City Elementary School first grade teacher Melissa Taft is the first teacher in the district to be awarded the 2020 I.O.W.A. STEM Teacher Award for the North Central Iowa Region.

Mary Lovstad, owner of Farm Girl Weddings, leans against a bar in her barn where she hosts wedding receptions.

Bernie the wedding dog sleeps under the table stored in the barn while between weddings.

Couples can have their wedding ceremony in the woods. Lovstad recently had a Japanese-themed wedding there.

Lovstad stands around the tables and chairs stored in the barn until the next wedding.