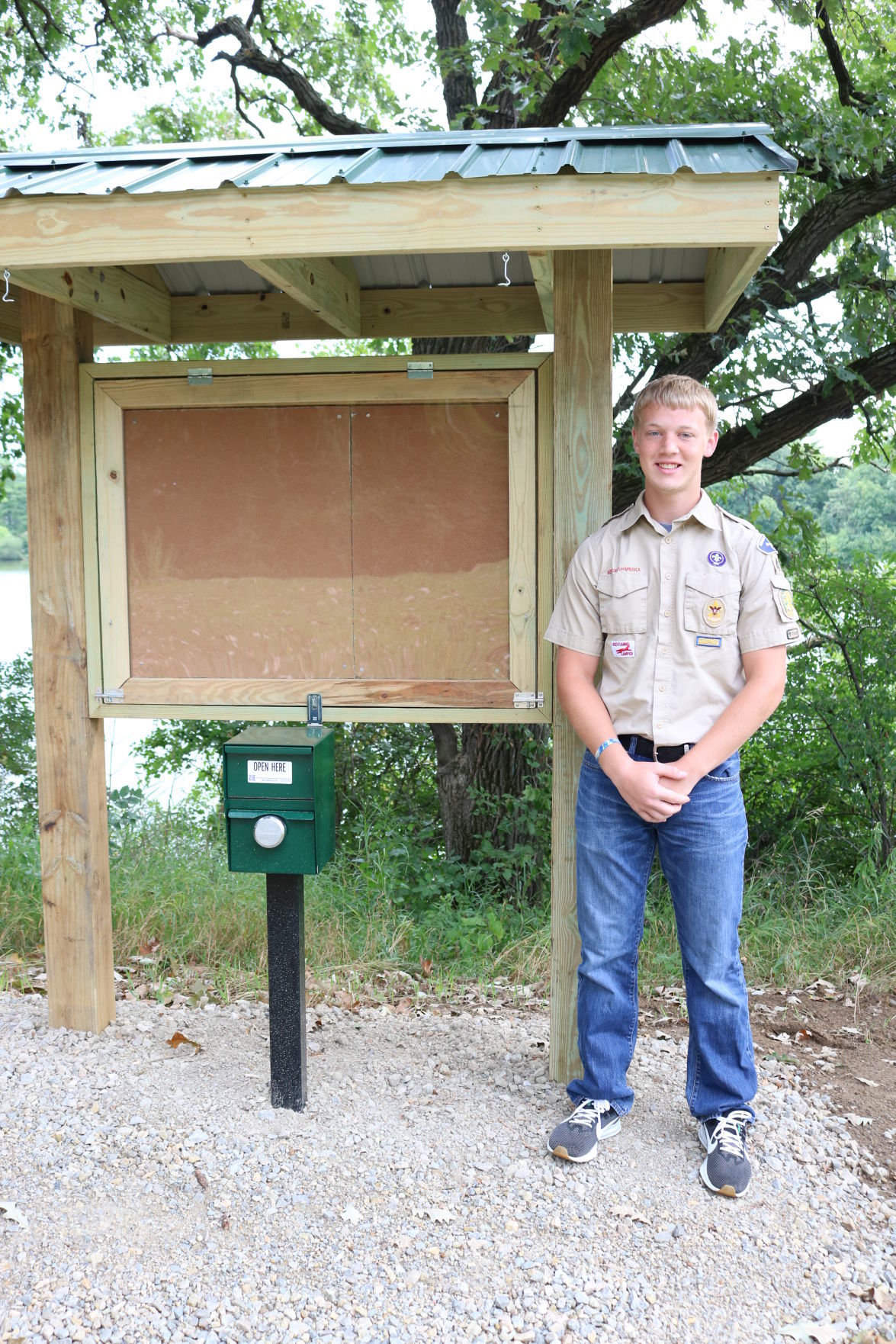 Boy Scout Conner Thompson stands next to the new kiosk and registration box he built for the campground at Thorpe Park. 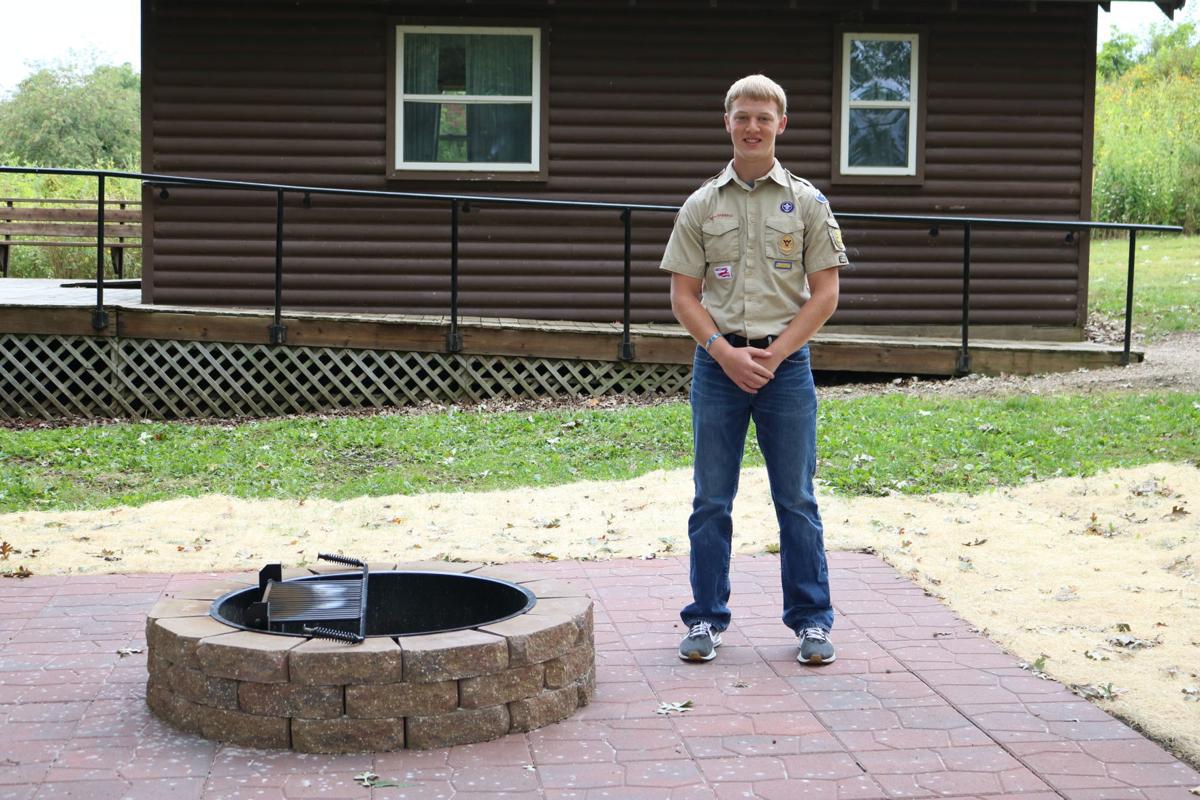 Conner Thompson stands on the patio of the new fire ring he put next to the cabin at Thorpe Park.

Boy Scout Conner Thompson recently finished his Eagle Scout project of constructing and installing a registration box, kiosk and a new fire ring and patio for the cabin at Thorpe Park.

Thompson, 17 and member of Boy Scout Troop 1418, said he asked for $2,500 for all the supplies, tools and miscellaneous items necessary for the project, which had been granted in full by the John K and Louise V Hanson Foundation.

Thompson said he started ordering all the needed materials right after his approval by the Winnebago County Conservation Board June 10 and had quickly constructed the kiosk off-site.

Because of his involvement in the football team at Forest City High School and the cabin being continually rented out and used, Thompson said he couldn’t put in the patio until the weekend of Aug. 10, roughly two weeks later than he wanted to be done with the project.

“It was more like finding times to get it done,” Thompson said. “This cabin gets rented, so you can’t really do it then, so I kept bouncing it back, then I set a date and it’d rain. It was like a never-ending time, and we were running out of opportunities because I’m really busy – football, work and stuff – it’s just, there’s not very much time to do it. So we just finally found a time and got it done. I wish we would have had it done a month ago, but we finally got it done, so that’s all that matters.”

Thompson said he chose to base his project in Thorpe Park because it’s down the road from his house and there is some family history with the park.

“I don’t really know exactly how it goes, but I believe my great-great grandpa actually owned this property and then lost it in the Great Depression,” he said. “And it was owned by another family and then donated to become this park.”

Additionally, his older brother Chandler had also done his Eagle Scout project at Thorpe Park, adding stand up grills at all the camp sites in 2015, Thompson said.

Robert Schwartz, the president of the conservation board, and Thompson had met a couple times to discuss what the park needed the most, which was a well-marked and protected registration area and a new fire ring with a patio, according to Thompson.

“The registration area for the campers was not well marked and unprotected by the elements, so it was a need for the campground,” he said. “The fire ring by the cabin was an old tire rim with no grass or rocks around it, just dirt. Every time it rained it would become mud and guests using the cabin would not be able to use the fire ring without stepping in mud.”

Thompson said he designed the kiosk to look like the one that was already in the park by the shelter house near the entrance of the park and he bought the fire ring as a kit with a ring and grill rack and blocks to go around it all with a 13-by-13 paver pad.

“I went out and measured and mapped out what [the kiosk by the shelter house] looked like and then we [built] the campground one to look exactly like it,” he said.

The kiosk and registration box will fit in with the rest of the park and benefit the public while the new fire ring will make the cabin area more functional, Thompson said.

“I think the kiosk will benefit the campground by having more reformative information about the park in a more central location of the campground, while the registration box will be more functional as you will be able to have the empty envelopes separated from the filled out ones,” Thompson said. “The fire ring will just benefit the cabin users as the mud is no longer an issue and will not track into the cabin.”

In the past few weeks, people from Forest City and its surrounding towns have gathered at the courthouse gazebo on the corner of Clark and J s…

Chloe Anderson is stepping on the gas for her hometown

While many seniors choose to go to college to pursue degrees such as nursing and art or to continue a career in a sport like football, one For…

Each year, Forest City recognizes the services of its paramedics.

Winnebago Industries reported its financial results for its third quarter in fiscal year 2020 with revenues decreased by 23.9 percent year ove…

The Winnebago County Conservation Board and NIACC have rescheduled their class, Canoeing Lake Catherine. The class will now be held from 1 p.m…

Boy Scout Conner Thompson stands next to the new kiosk and registration box he built for the campground at Thorpe Park.

Conner Thompson stands on the patio of the new fire ring he put next to the cabin at Thorpe Park.