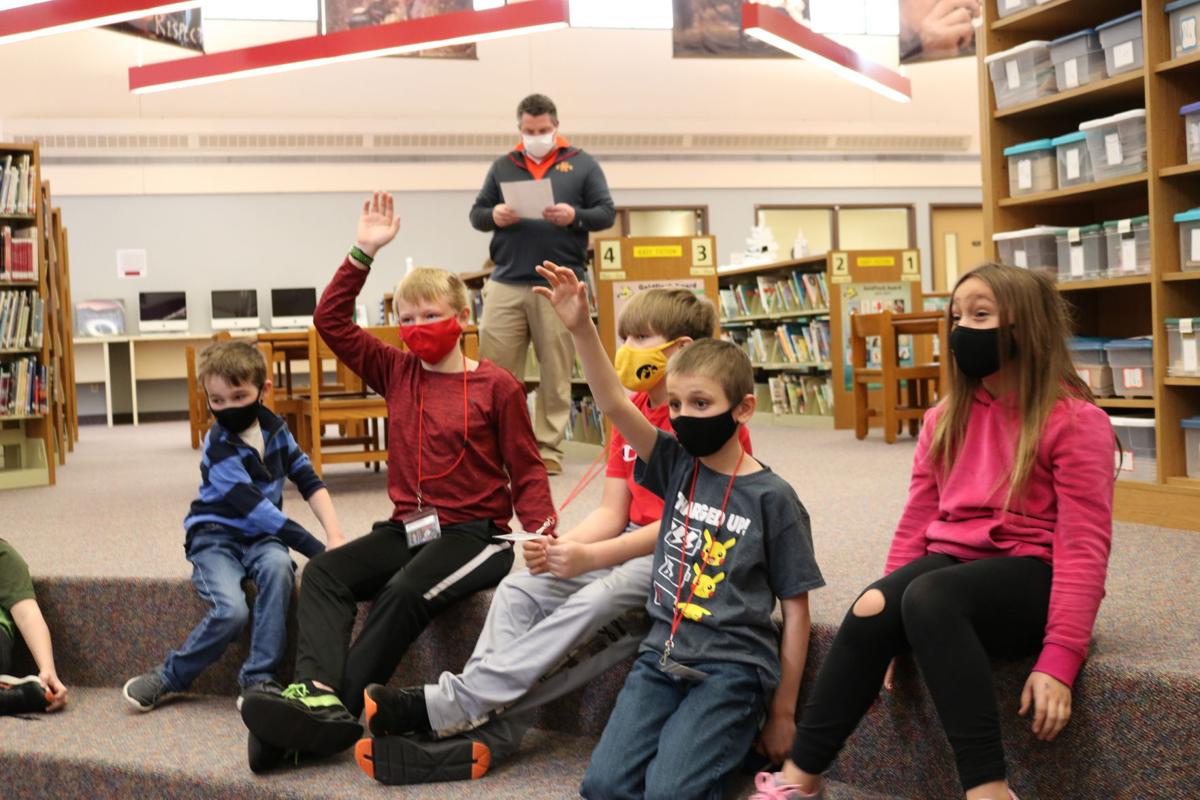 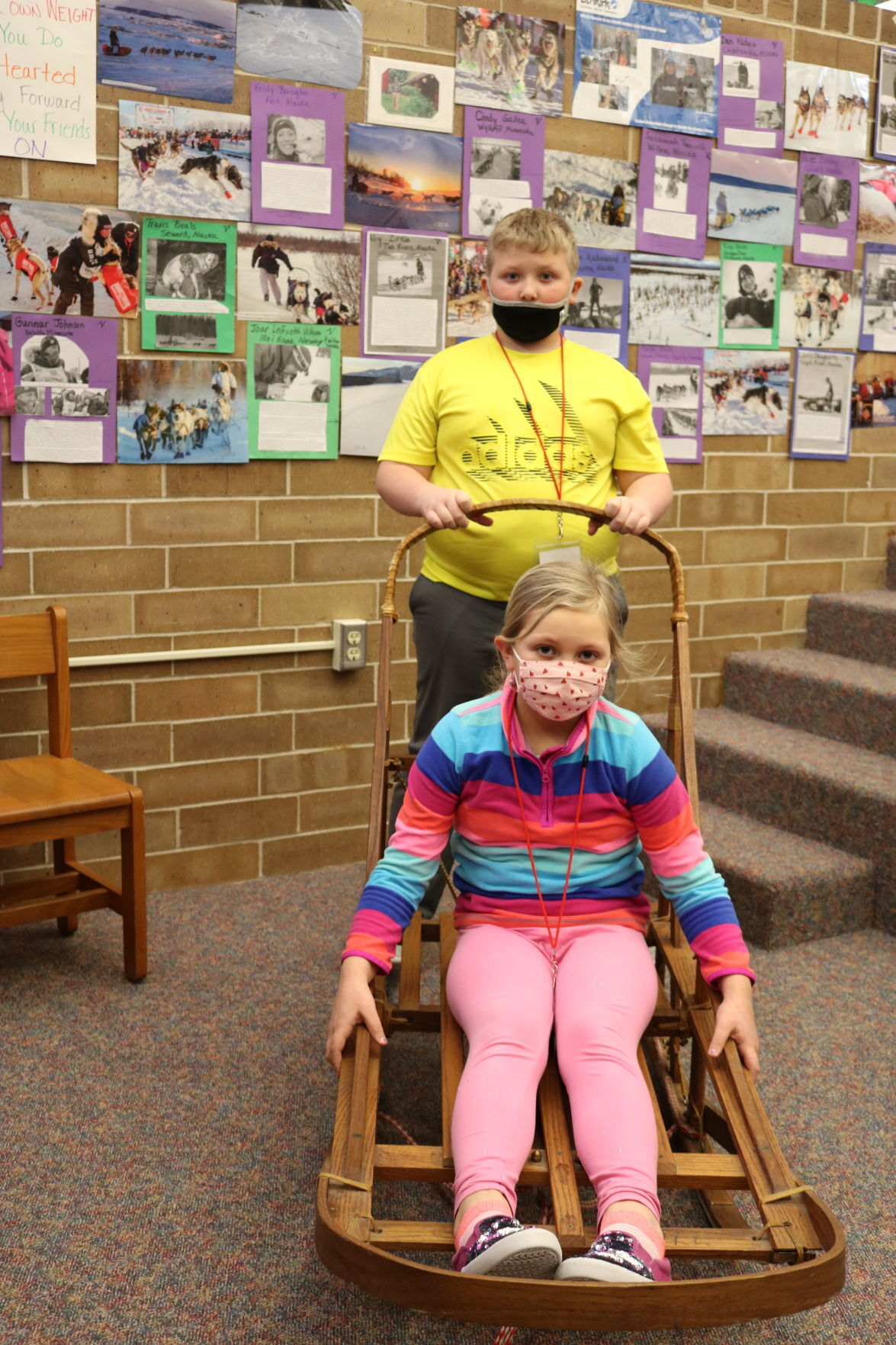 Finley Anderson (front) and Keagen Lawson are pictured on a sled brought to school on Feb. 25. Forest City third grade students learned all about the annual Iditarod dog-sledding race in Alaska from Marla Betz. 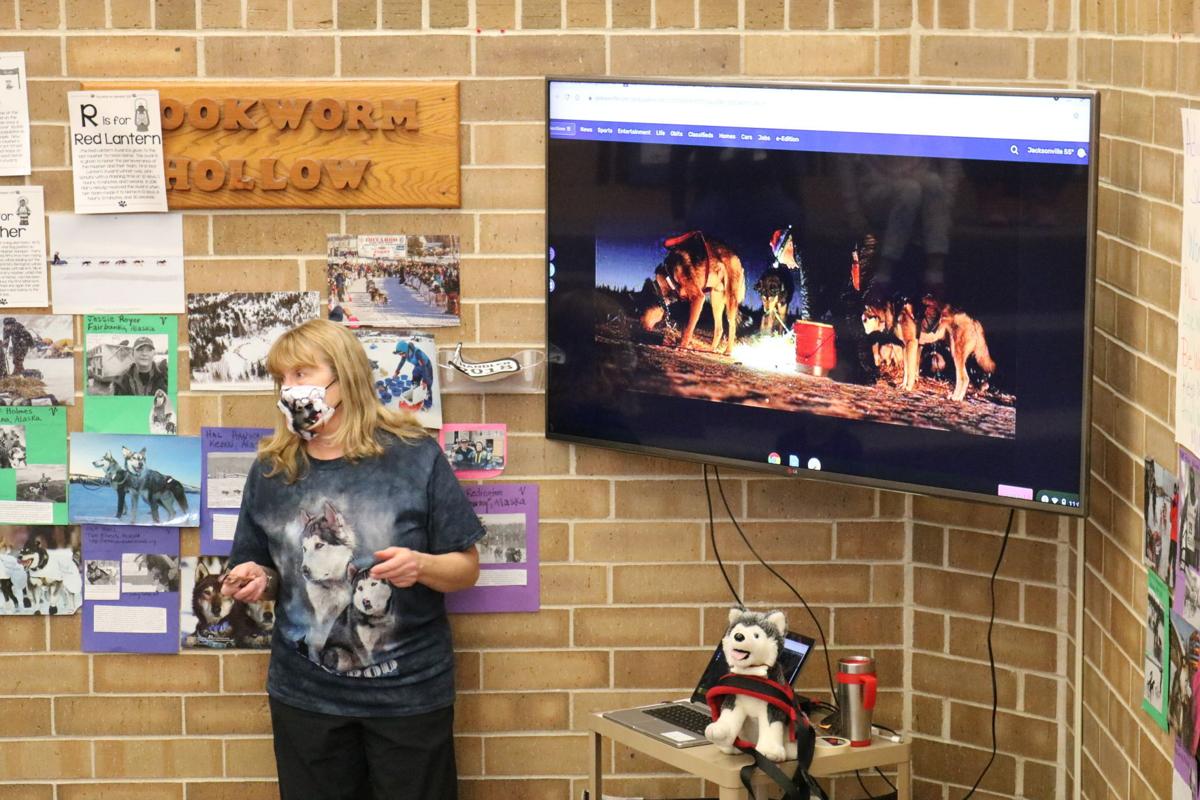 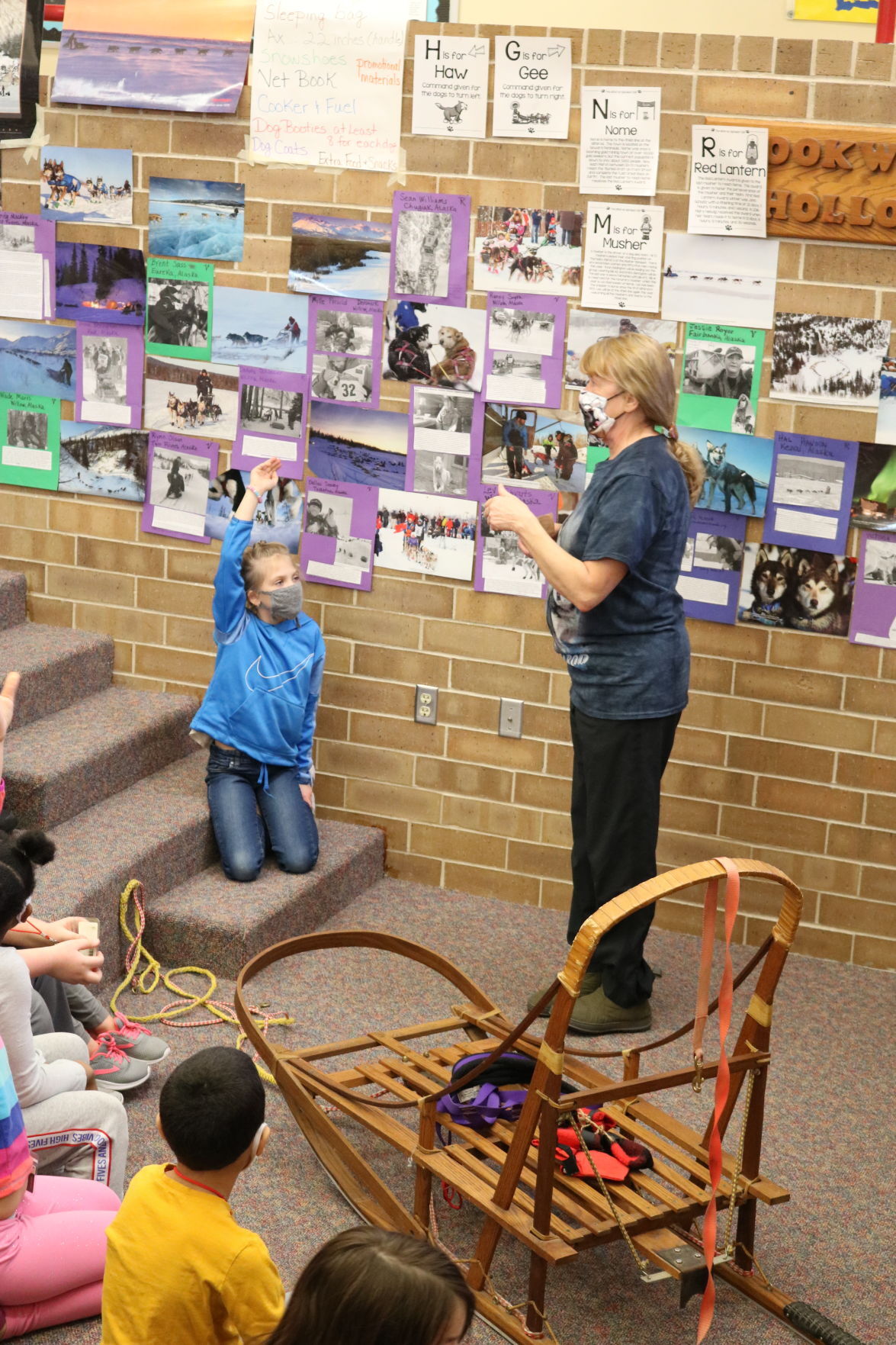 MacKenzie Determann, left, was an eager participant in a presentation describing sled dogs and sled racing in Alaska. 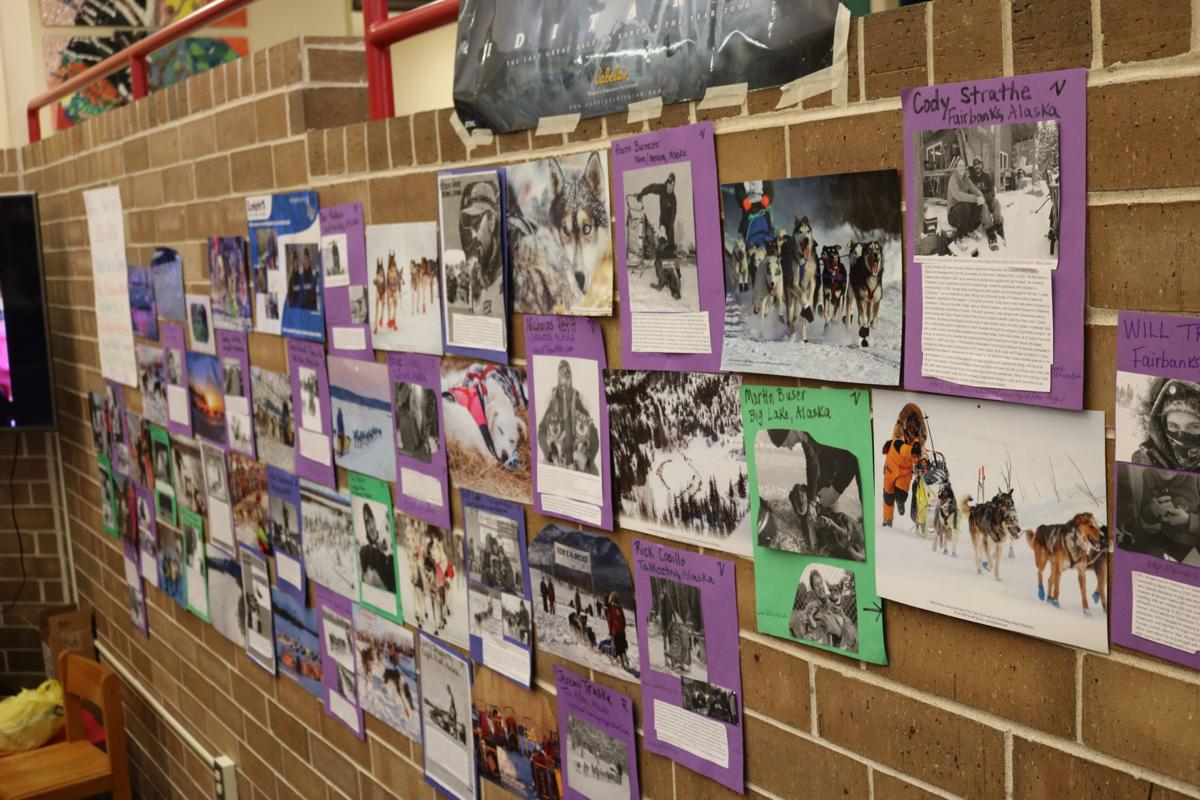 Marla Betz created walls of photos and information for students, pertaining to dog sledding and individual mushers in Alaska.

However, substitute teaching quite often, she hasn’t retired completely from teaching, nor from sharing her love of dog sledding with Forest City Elementary School students.

Betz familiarized all of them with sled dogs, focusing on the Iditarod race in Alaska. Having been to Alaska and helped with the Iditarod twice herself, she arrived with her dog sled, harnesses, and dog booties to show the children.

Students enjoyed viewing the many pictures and posters Betz shared. They also read biography sheets on each musher participating in this year’s race. Since spring break starts simultaneous to when the Iditarod begins, there won't be in-class activities during the race like students done in the past.

“Each student usually has a musher they can follow,” said Betz. “There are fewer mushers this year, but hopefully the kids will track their musher.”

Betz said she gained an interest in dog sledding when Forest City held sled dog races at Pilot Knob in 1994 and 1995.

“I have owned Huskies and have a dog sled, but I am only a musher wannabe,” said Betz. “I have worked at different sled dog races, including two trips to the Iditarod in Alaska, in 2002 and 2018. In 2018, one of my jobs there was in the call center, so the third graders from Forest City Elementary School called up to Anchorage to ask me questions about the race. That was really special. I had a blast.”

Other jobs Betz undertook in her first Iditarod included working at a musher banquet, helping to park musher vehicles for a ceremonial start, and handling dogs for mushers, including an Iowa City musher, in addition to working in the call center.

Even now, she still imparts to students what it is really like to be in the Iditarod wild.

“Those without computers, especially natives around Alaska call in to race call center for race updates,” she said. “I got to fly in a bush plane out to one of the checkpoints and see the mushers camping. I could see up close the feeding of the dogs, the vets doing dog checks, and talking to mushers.”

Betz said she enjoys peaking students’ interest in a different type of activity or hobby as well as discussing the bond between mushers and their dogs. It gets them intrigued about the great outdoors and Alaska, in particular.

Students learned about many aspects of the Iditarod, ranging from volunteer work that makes the race possible, the mushers, their kennels and preparations for the big event.

Betz discussed the dogs, their desire to run, the training, the food they eat, costs, and especially the bond formed between the mushers and dogs. A number of women run the race and there is also a Junior Iditarod for persons under age 18. Unfortunately, the junior race will not be held this year due to COVID-19.

"This is very educational for them to learn about a historical event that happens every year in a different part of the world," said third grade teacher Matt Harriman. "So many of these kids are animal lovers, which helps kids really get engaged."

• Iditarod means "a distant place” from the Ingalik Athabascan word "Hidehod" for the Iditarod River. Once a gold mining town, it is now a ghost town. This year's race will go there.

• The Iditarod Sled Dog Race started in 1973 when Alaskan Joe Redington Sr. realized that snowmobiles were becoming the new mode of transportation in Alaska. He wanted to do something so the sled dogs and mushers of the past were not forgotten. So, he started the race that goes from Anchorage to Nome and follows much of the old mail route - the historic Iditarod Trail.

• The Iditarod race also remembers the brave mushers who in 1925 took serum to Nome to combat a deadly diphtheria outbreak.

• Iditarod 2020 was the only sporting event still going on as the COVID-19 shutdowns began after the race had started.

• Iditarod 2021 will be much different. Mushers and their dogs will not go to the usual native villages due to COVID-19. Mushers and dogs will be taking a much different route and making a loop, crossing the Alaskan Range a couple of times. There will be fewer mushers as many are unable to travel back to Alaska.

In the few short weeks following the passing of beloved Forest City auto mechanic Mark Kaiser, customers have increasingly been calling his wi…

The Mitchell County Home is a remnant of a bygone era, one where those is need found meaning working the fields. Soon, it will be buried where…

Extra efforts from businesses and members of the community made the 2021 Forest City High School prom possible on April 17.

Vida Nueva, which means new life, is the name of a new Hispanic Christian church in Kanawha.

The Osage boys golf team had the chance to get out and play 18 holes for the first time this season on Saturday at Grundy Center.

Osage fights the war on salt

Like many scholastic professions, the name for those who work in a school’s kitchen has changed over the years. Lunch ladies are now called nu…

Finley Anderson (front) and Keagen Lawson are pictured on a sled brought to school on Feb. 25. Forest City third grade students learned all about the annual Iditarod dog-sledding race in Alaska from Marla Betz.

MacKenzie Determann, left, was an eager participant in a presentation describing sled dogs and sled racing in Alaska.

Marla Betz created walls of photos and information for students, pertaining to dog sledding and individual mushers in Alaska.