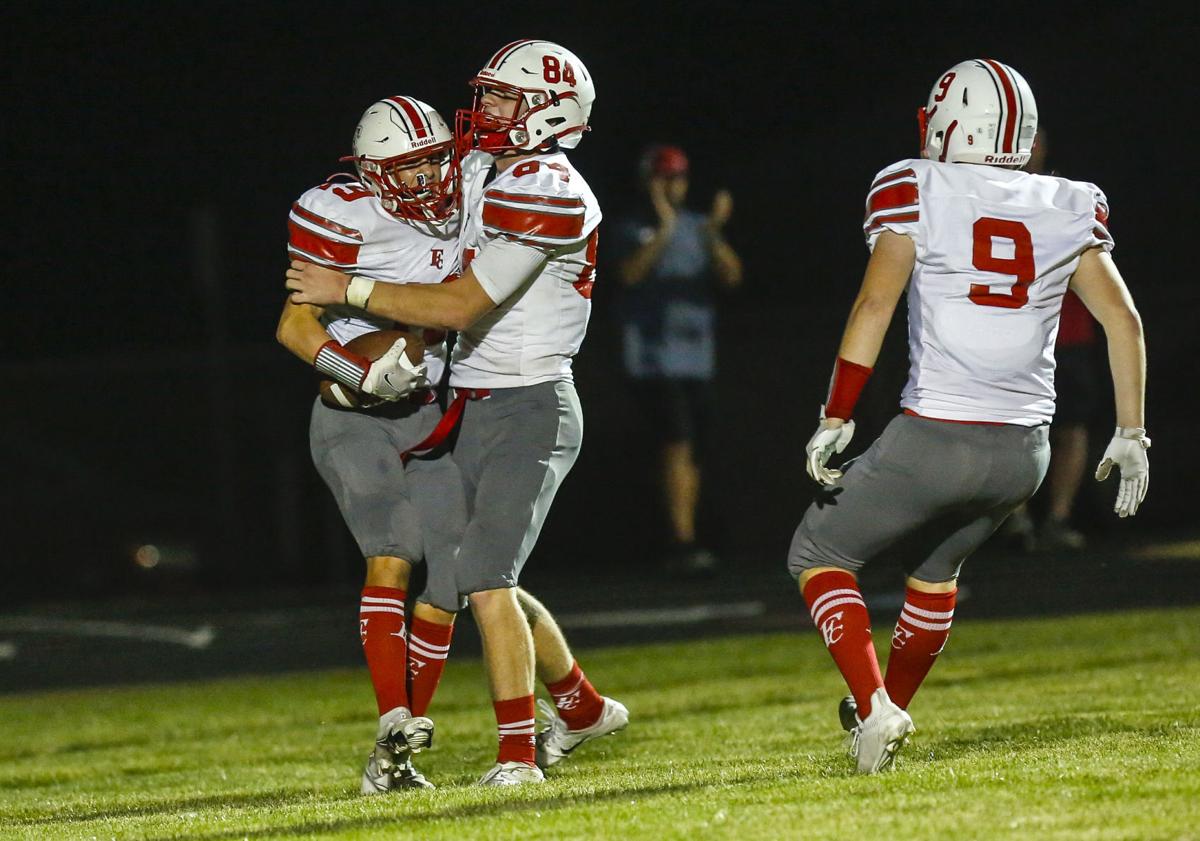 Forest City's Brock Moore, Andrew Snyder and Noah Miller celebrate in the end zone after Moore ran in for a touchdown against Hampton-Dumont-CAL on Friday in Hampton. 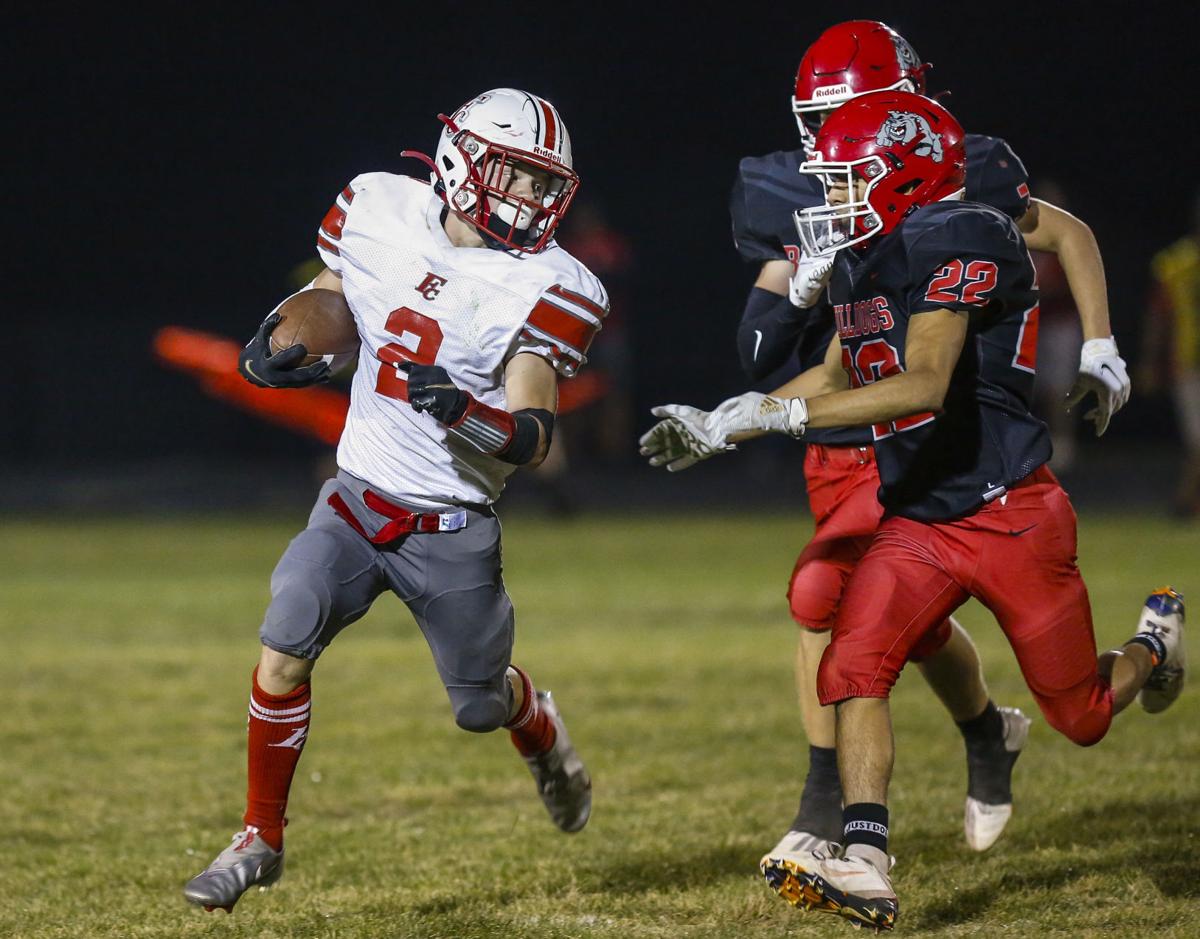 The Forest City football team was able to prove that at Hampton-Dumont-CAL (HDC) on Friday night in Hampton. The Indians spoiled the Bulldogs’ homecoming, dominating the second half en route to a 27-13 win.

Going into halftime, the score was tied, 7-7. The Indians outscored the Bulldogs, 20-6, in the second half to earn a share of the district title.

“I’m proud of the guys,” Forest City head coach Chad Moore said. “Going into halftime we made some adjustments and we came out in the second half ready to play football. We pretty much shut them down defensively and got our run game going.”

After the Indians were required to take the past two weeks off due to COVID-19, Moore wasn’t sure what to expect from his team, but he knew it might not be pretty early on.

“It didn’t start out quite like we thought it would, but we weren’t sure what kind of football team we would get,” Moore said. “We were without a lot of guys and we were off two weeks. We were pretty rusty and it showed and we had a little fatigue.”

During the two-week break, Moore says he did as much as he could to keep the guys he had available physically and mentally ready to play. He kept practice short, but tried to keep up the conditioning for his guys.

But it’s hard to simulate game reps. Maybe that showed in the first 24 minutes of play.

At the half, junior running back Reese Moore had only 20 rushing yards on 10 attempts. That’s not how the Indians normally operate with their tough runner.

The coaching staff made some adjustments and the offensive line opened up some holes for Moore to score two touchdowns and rush for over 100 yards in the second half alone.

“It’s all about the line getting that movement and me making the right reads,” Reese Moore said.

In the first half, neither team could get much going until midway through the second quarter. The first score was when HDC junior Tate Schmitt intercepted Forest City’s pass and took it 61 yards the other way for the score. That put the Bulldogs up, 7-0.

On the ensuing kickoff, Reese Moore had a long kick return that put the starting field position for his squad at the 15-yard line going in. He was able to put an exclamation point on his kick return by scoring a 1-yard touchdown run near the end of the first half. The score was tied at 7 apiece at half.

The Indians looked like a completely new team on offense after halftime. They rolled down the field and scored on their first offensive possession. Reese Moore was able to punch it in on a 12-yard touchdown run to put the Indians up 14-7.

The Bulldogs punted on the ensuing possession but senior Jordan Severs intercepted a Forest City pass and set HDC up with good field position. Junior quarterback Cal Heeren scored on a 2-yard scamper, but the extra point was missed. The score was 14-13 after three quarters.

That would be the last time the Bulldogs scored all night.

Senior Brock Moore recorded a pick-six and Reese Moore rumbled in for a short-yardage touchdown late in the game to seal the deal.

“Our defense played outstanding and our special teams played fairly good,” head coach Andy Bruemmer said. “Offense wasn’t stellar tonight that’s for sure. I think their front six is probably the second-best that we faced all year.”

The Indians now will wait to see what their future holds. After winning a share of the district title, the squad might have a shot at a first-round bye.

“We’re going to come back on Monday ready to go,” Chad Moore said. “Whether we’ve got a week off or preparing for an opponent, we’ve got to be ready to go to work. How that work looks will depend on how those games shake out.”

For the Bulldogs, Bruemmer was able to improve the Bulldogs from only one win a season ago, to three wins in seven games this year. He’s proud of his seniors and he knows the season isn’t over yet.

“I told our guys that I’m going to give them 10 hours to feel crappy,” Bruemmer said. “At 8:00 tomorrow morning, they’ve got to wake up and flush it and we’re moving on.”

The Indians finish their regular season with a 3-2 record and the Bulldogs finish at 3-4.

Although the Mason City volleyball team came out swinging at home on senior night against Fort Dodge, the Mohawks fell in three sets.

Back in the rankings: St. Ansgar volleyball wins 13-straight

The Mason City football team finished off the regular season with a 49-21 road loss to Ballard on Friday night, as a second quarter offensive …

The high school football playoffs are here at last, and finally, North Iowa's football teams know who they will be playing in the first round. 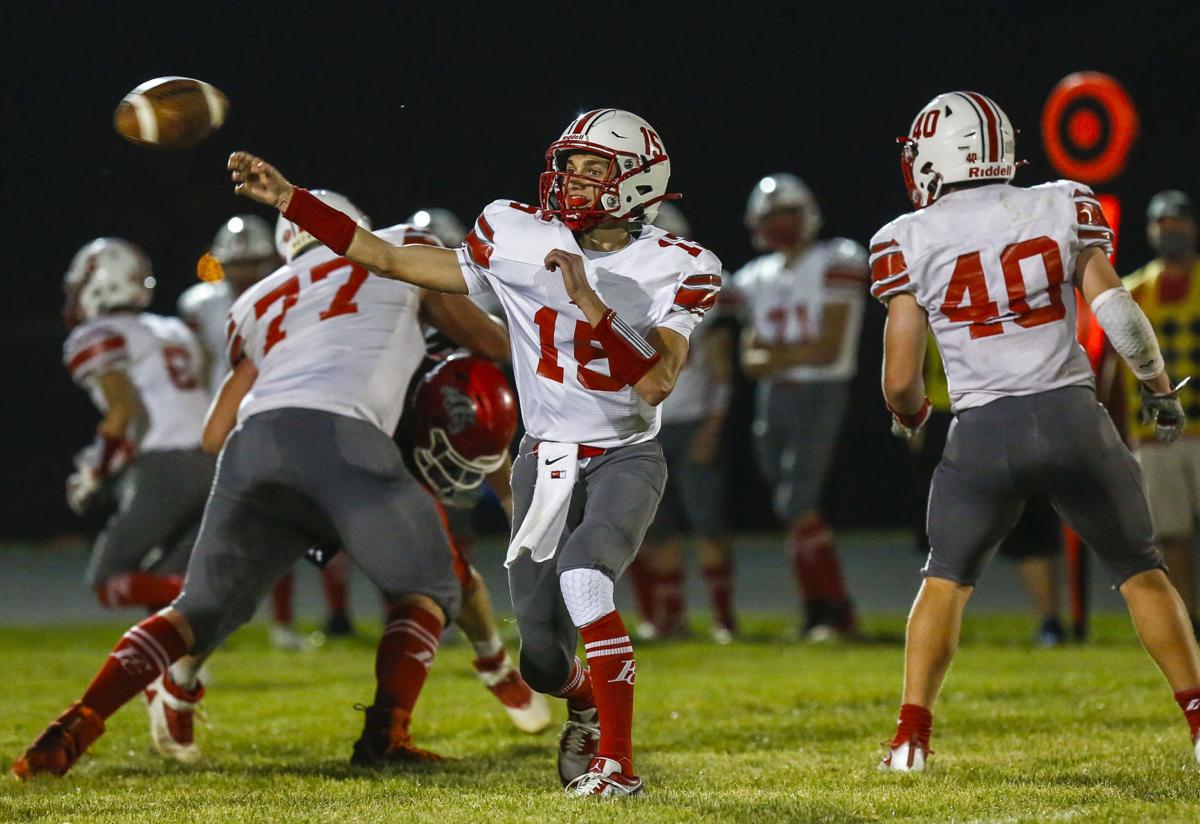 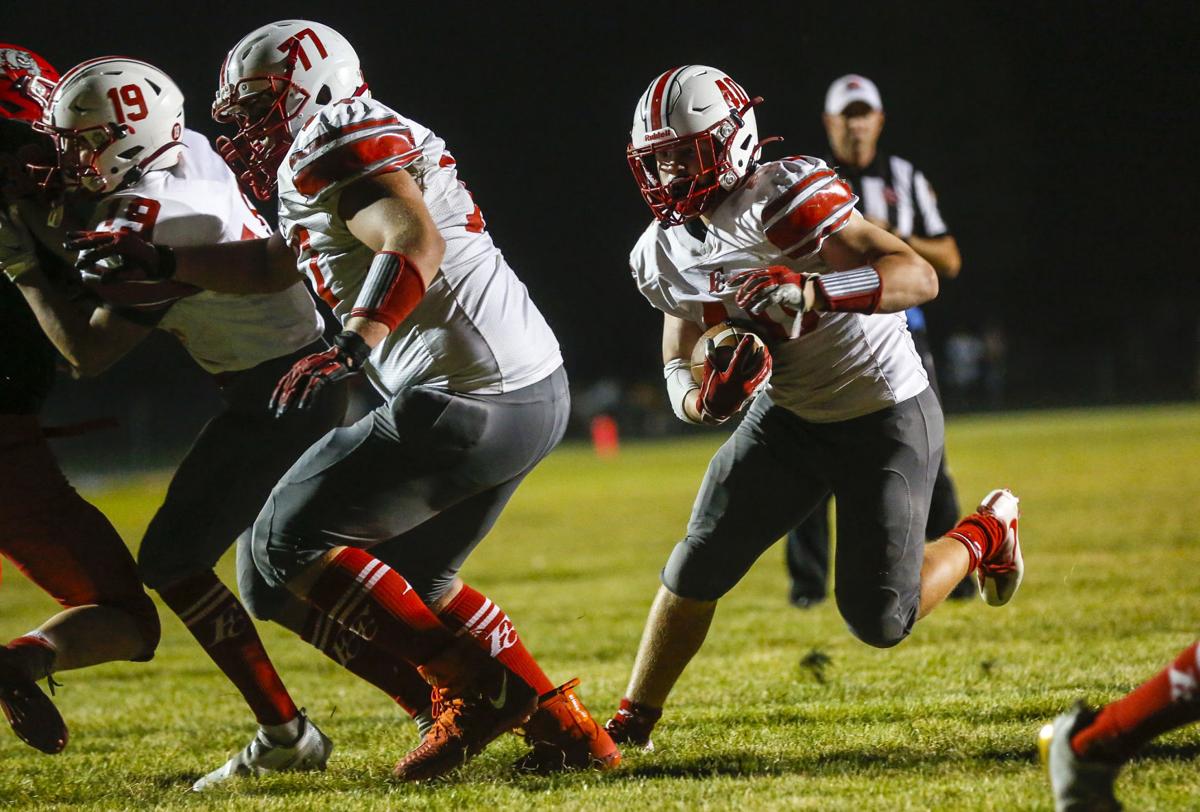 Forest City junior Reese Moore runs the ball on the way to a touchdown against Hampton-Dumont-CAL on Friday in Hampton.

Forest City's Brock Moore, Andrew Snyder and Noah Miller celebrate in the end zone after Moore ran in for a touchdown against Hampton-Dumont-CAL on Friday in Hampton.