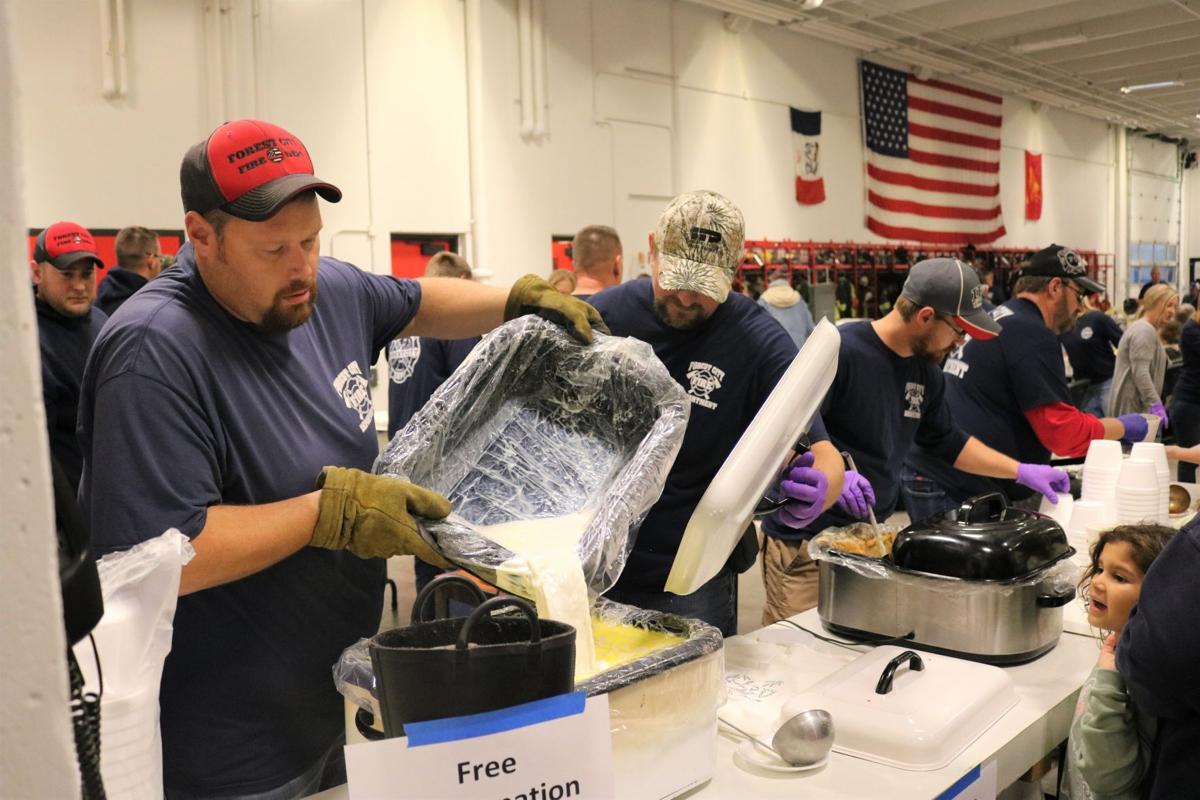 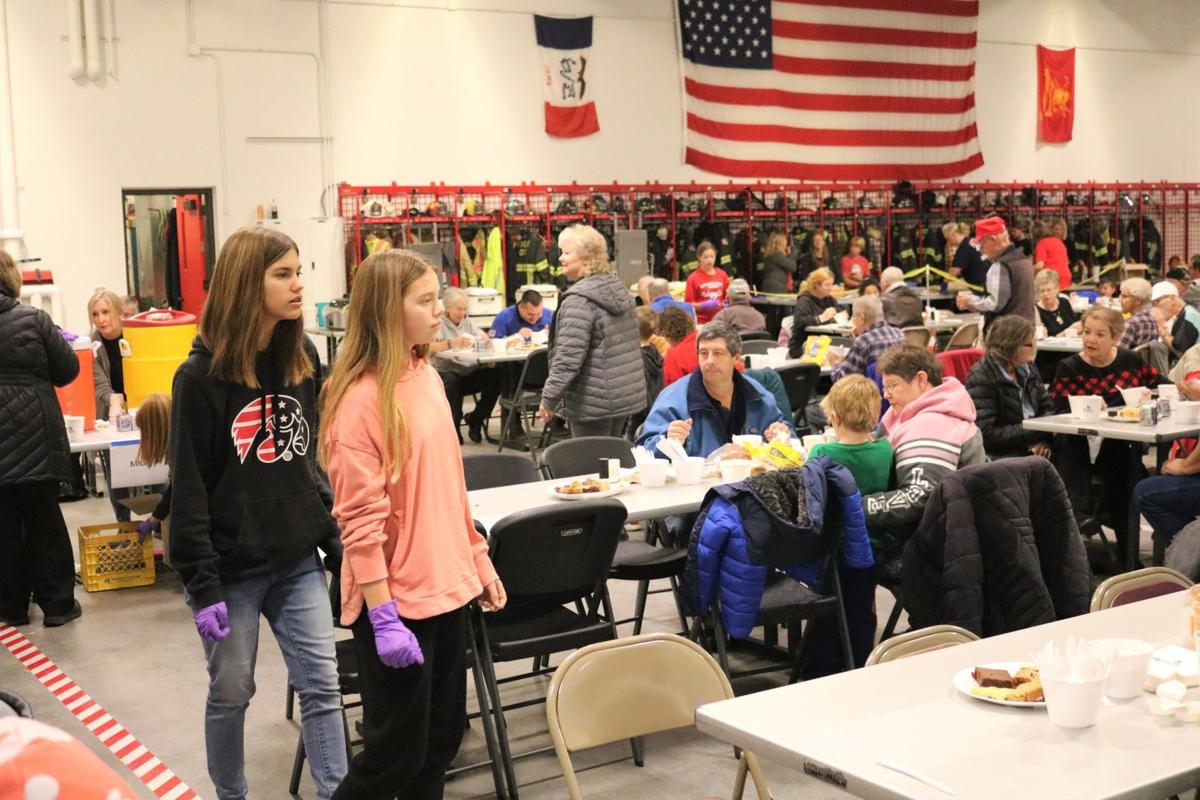 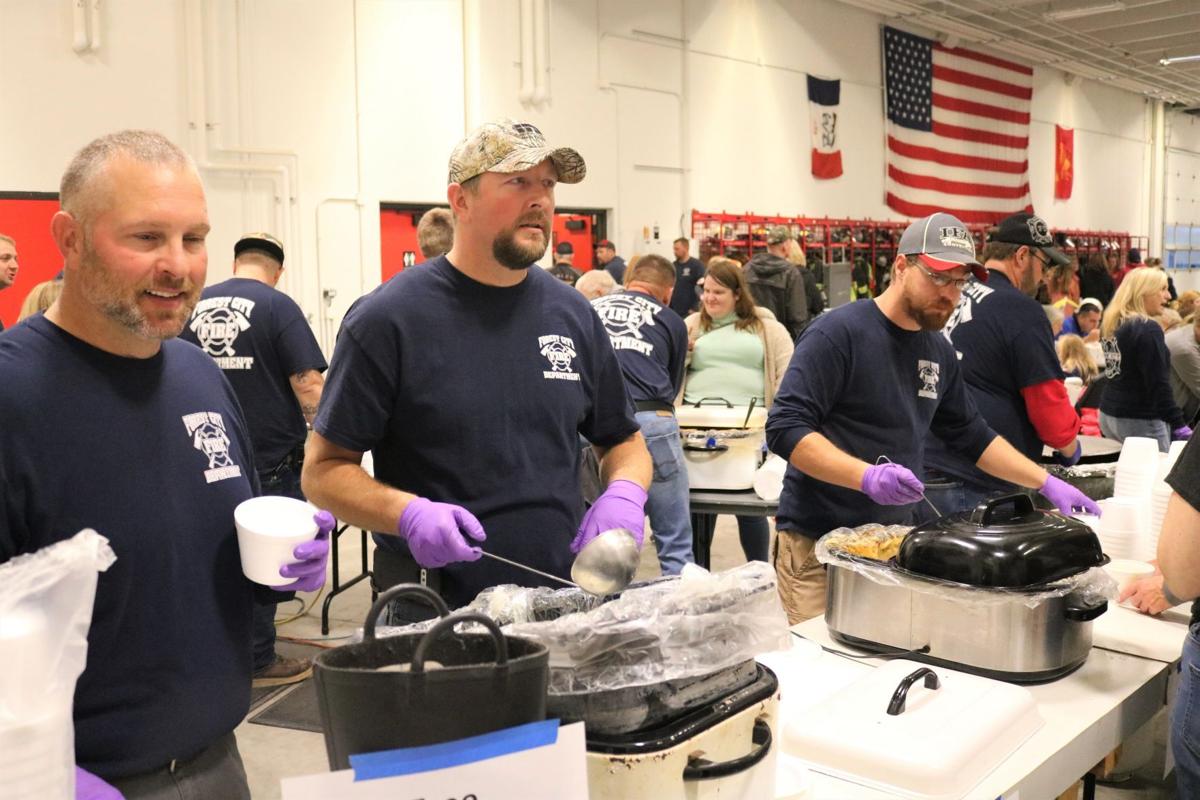 From left, Chad Gerdes, Brandon, Schmidt, and Matt Schaumberg greeted guests to the food line at the Nov. 13 soup supper of the Forest City Fire Department. 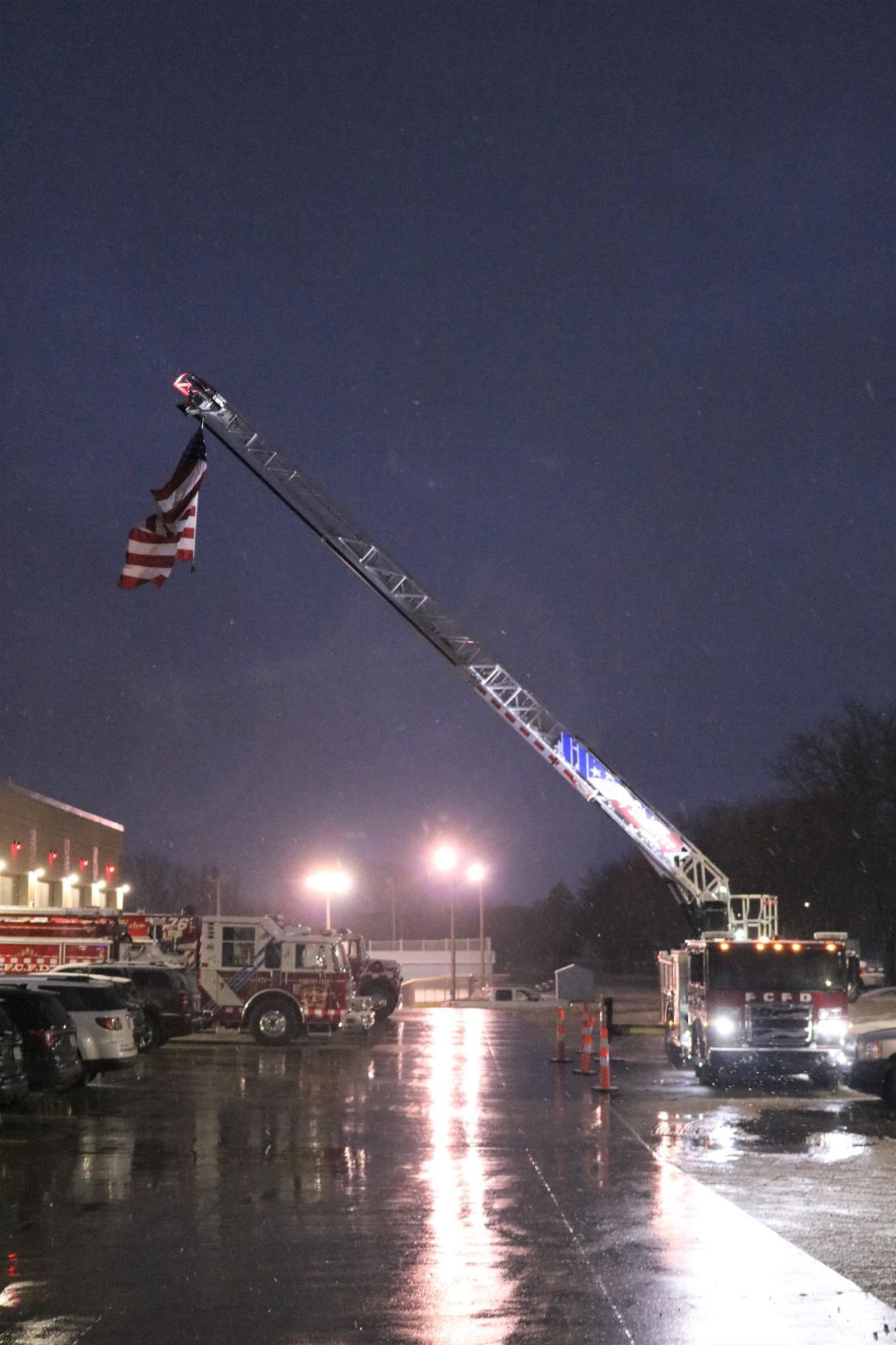 An American flag flies atop a Forest City Fire Department Ladder truck at the soup supper on Nov. 13. 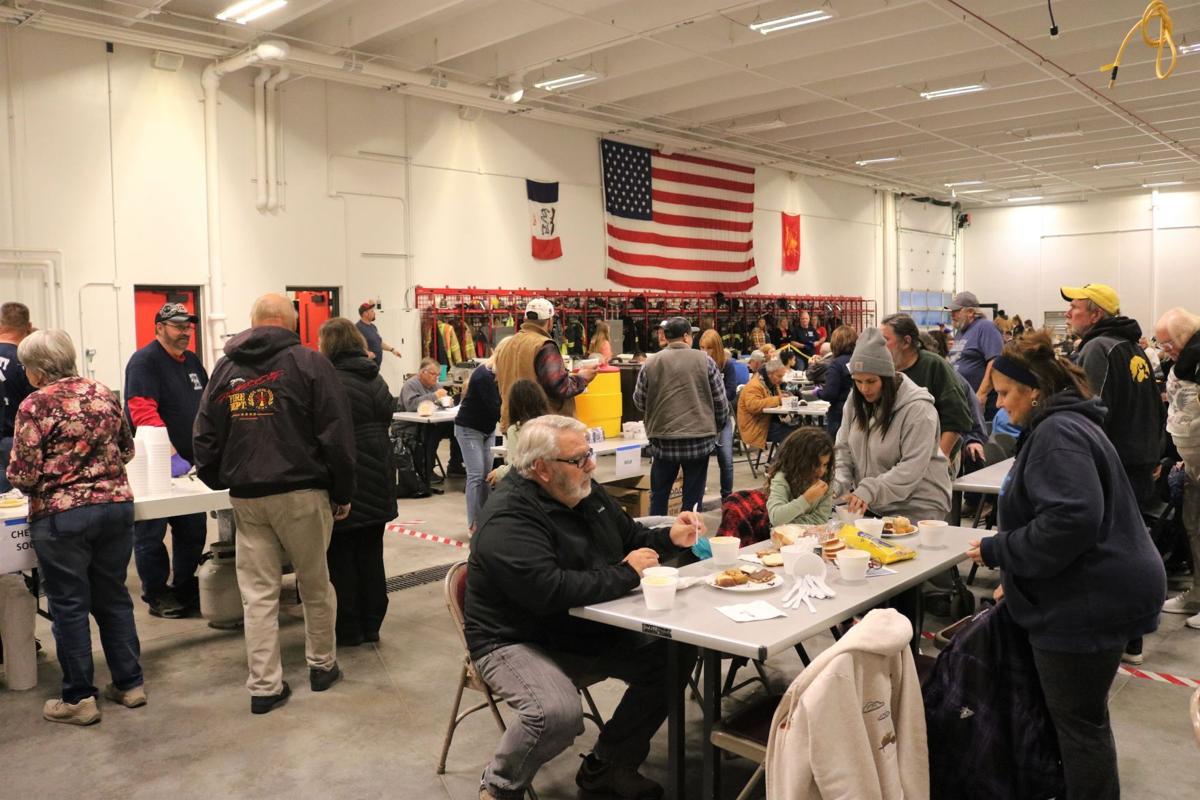 A large crowd gathered on a cold, blustery night for warm soup, conversations, and a good cause - the Forest City firefighters. 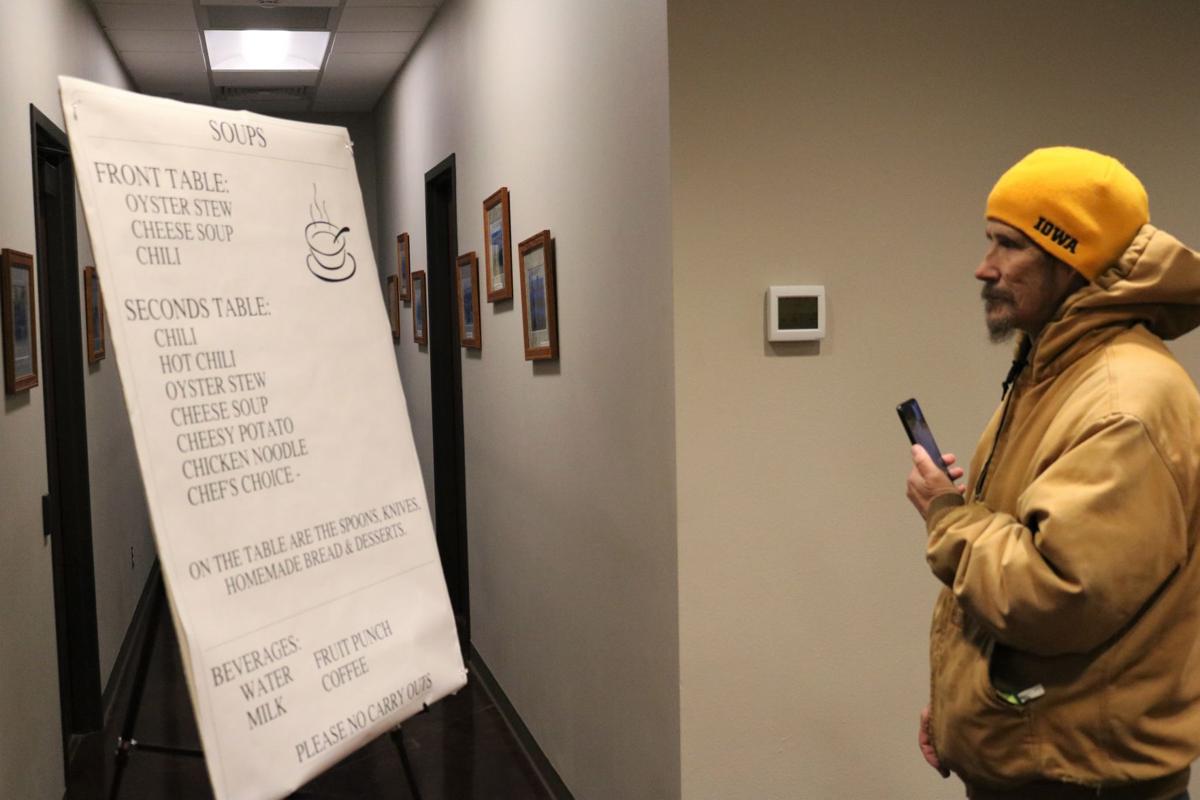 Don Carlson of Forest City reads the menu board at the Forest City Fire Department Soup Supper fundraiser on Nov. 13. 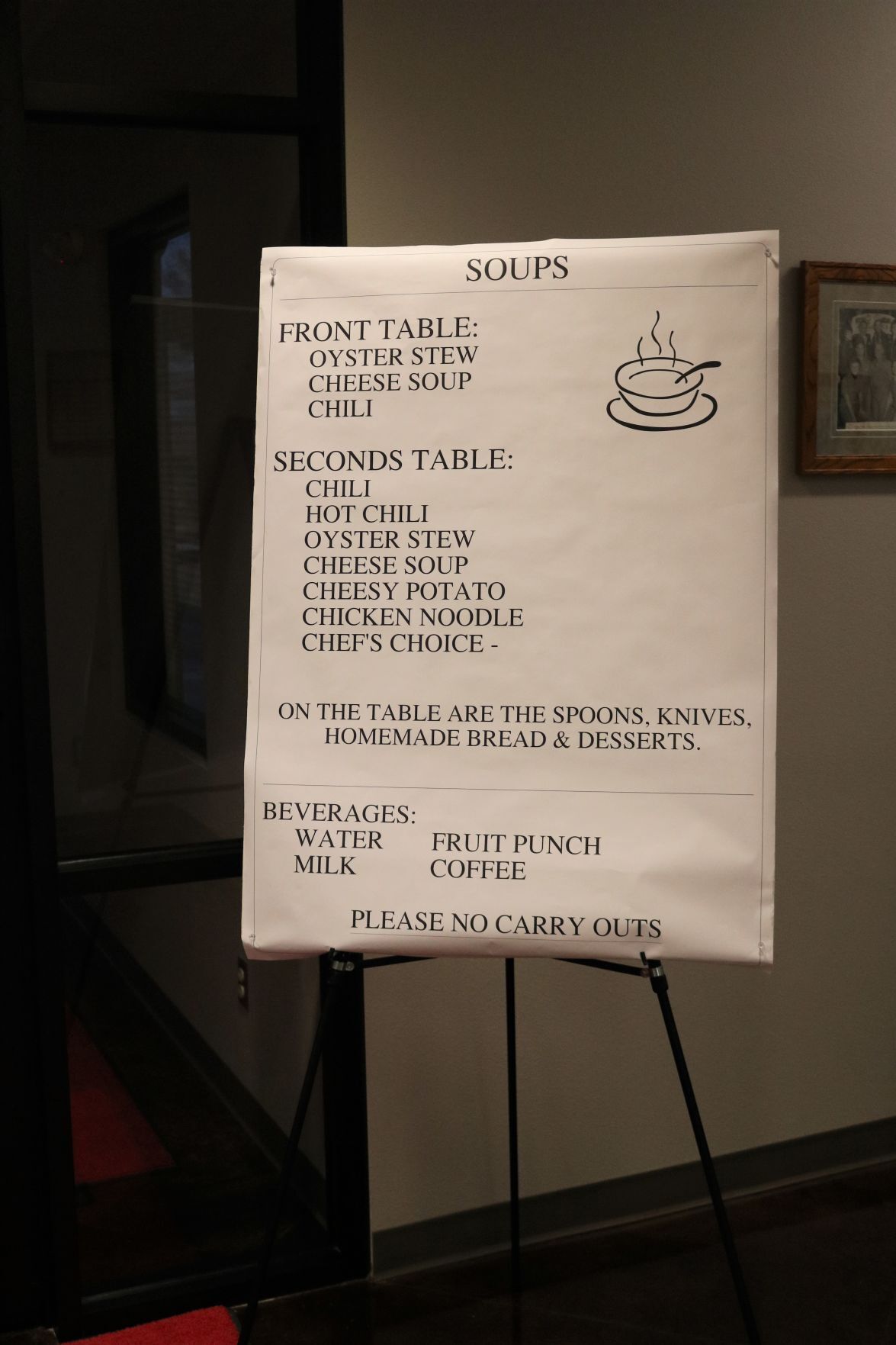 A menu board greeted guests at the Forest City Emergency Service Building where a soup supper was held by the fire department. 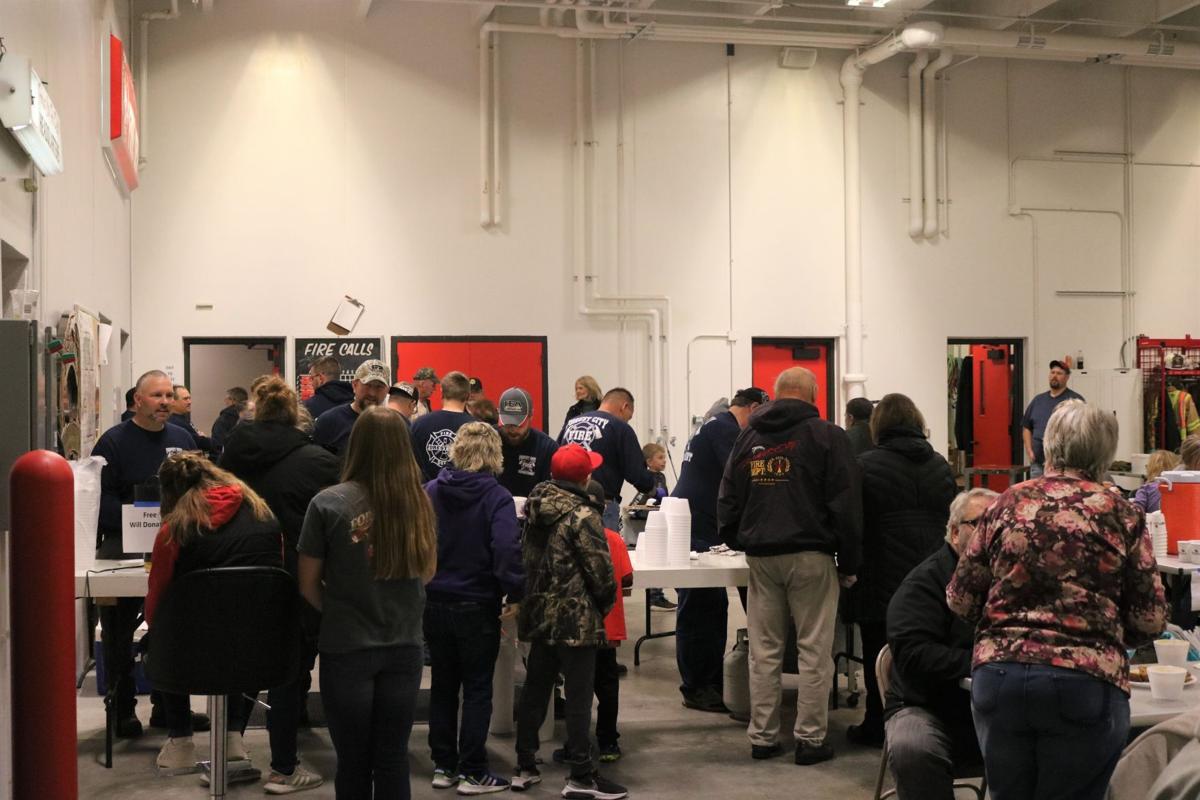 There was a long line for chili, oysters, and soups at the Forest City Fire Department's soup supper fundraiser on Nov. 13.

The weather was cold and blustery on Nov. 13, transitioning between rain and snow. However, the food and company inside the Forest City fire hall was warm and aplenty for the 30th annual soup supper that is a community staple.

“Even with the weather, we were pushing close to 800 people, which is a little smaller for us,” assistant fire chief Nate Nelson said. “It’s about 900 to 1,000 normally most years.”

Nelson said that preparation started on Thursday night for the Saturday event when firefighters washed floors and trucks and sanitized everything before bringing in food supplies and a seemingly endless number of roasters for soups.

They even had to bring in temporary power panels for all the roasters going simultaneously. The 22-member department that is all men at the present time prepped vegetables and meats on Friday into Saturday.

“Everybody has tasks,” Nelson said. “One hundred percent of husbands and wives help. It’s a big family, our department, being committed to do everything we do.

"Our wives play a huge roll in this, baking dessert bars, homemade breads and cookies and helping with everything. But it’s pretty much all fire fighters that do the cooking. I’d say up to 17 guys were working (in the kitchen), rotating through and stirring roasters and checking temps. It is all hands on deck.”

Early in a three-hour serving window, firefighters said they had 13 large roasters with chili, eight with oysters, four with roasted chicken noodle soup, five with cheese soup, and many other soups.

Dana Oudekerk was pouring a new batch of traditional oyster stew (along with chili varieties) near the front of the free-will donation food line.

“I helped get the soup ready and did quite a bit of the dishwashing,” said 14-year Forest City firefighter Andrew Faber. “One of my children (7-year-old Weston) helped with setup in the morning and my wife, Karla, made bars and helped clean tables. It is very much family oriented. I enjoy all the camaraderie. It brings everyone together. Everyone helps to put it on for the community and to help support us.”

Even past Forest City firefighters still help with the event. An example is Gene Swanson, who along with his wife Deb, cooked and provided a roaster of homemade soup as during so many years past.

“He used to cook at this for years and is still part of our firefighter family,” Nelson said. “We are so thankful for the community support that helped with this facility too. It is all greatly appreciated.”

In front of the still shiny modern facility near the intersection of J Street and Highway 69 was a lighted American flag flying high atop a department ladder truck.

“This started way before I was on the fire department,” Nelson said. “We did a pork-loin drive through last year. Our community still continued to support us last year through the pandemic. It’s consistent in up or down times, pandemic or not, the community is consistent in supporting us.”

He said many people sent in donations well before the supper and those in attendance were generous as well. Some of their assistance will go toward a new “grass” rig that has been ordered. Nelson said it is a one-ton quad-cab truck/skid unit with a portable tank and pump.

He also cited the cost of digital radios for “narrow banding,” which can cost between $2,000 and $5,000 for a one-person handheld radio, noting a 911 cell phone charge that also helps fund them. Donations can also help fund necessary apparatus, gear, rescue tools, and other vehicles.

“We could raise more money with a drive through like last year because there are less costs, but that’s not the whole purpose. This brings everyone together from a community that is very, very supportive of us.”

Curbside pickup was available again this year for those requesting it, he noted.

In a fire department that strives to be proactive, Nelson said it is in pretty good shape after a $160,000 fundraising effort prior to the soup supper. That helped with personal protective gear that will assist crews with rescue and fire suppression efforts.

Nelson cited a difficult mutual aid call to a house fire in Crystal Lake during the early morning hours of Nov. 11 that shook some of the guys. While an official report of the State Fire Marshall’s Office was not yet available, according to Nelson and Crystal Lake Chief Luke Hanna, they reported that Reed Thompson and his son, Bryson Thompson, were both killed in a house fire in the 100 block of 2nd Street in Crystal Lake.

Nelson said guests at the soup supper who had already given generously to the department, dug deeper in their pockets to help support the family of the deceased.

“How often do we have this many people walk through the door? We put some things on the tables about this and people filled a boot on the way out to raise ($1,850 including checks payable to Larry Thompson) additional funds for the two individuals that lost their lives in that fire,” Nelson said. “How cool is that. In tragedy and in good times, this community is wonderful.”

Crystal Lake Chief Hanna said his department of about 14 members sent eight responders to the scene of the house fire. They were assisted by the Forest City, Woden, and Britt Fire Departments.

Nelson said his department wants to do everything possible to help prevent something like that from happening again, including assisting residents with proactive measures like installing working smoke detectors in their homes.

“That was a very bad call in Crystal Lake with lots of emotions,” Nelson said.

“Quite a few guys are taking it pretty hard right now,” Lamping said. “We are collecting for the family.”

From left, Chad Gerdes, Brandon, Schmidt, and Matt Schaumberg greeted guests to the food line at the Nov. 13 soup supper of the Forest City Fire Department.

An American flag flies atop a Forest City Fire Department Ladder truck at the soup supper on Nov. 13.

A large crowd gathered on a cold, blustery night for warm soup, conversations, and a good cause - the Forest City firefighters.

Don Carlson of Forest City reads the menu board at the Forest City Fire Department Soup Supper fundraiser on Nov. 13.

A menu board greeted guests at the Forest City Emergency Service Building where a soup supper was held by the fire department.

There was a long line for chili, oysters, and soups at the Forest City Fire Department's soup supper fundraiser on Nov. 13.