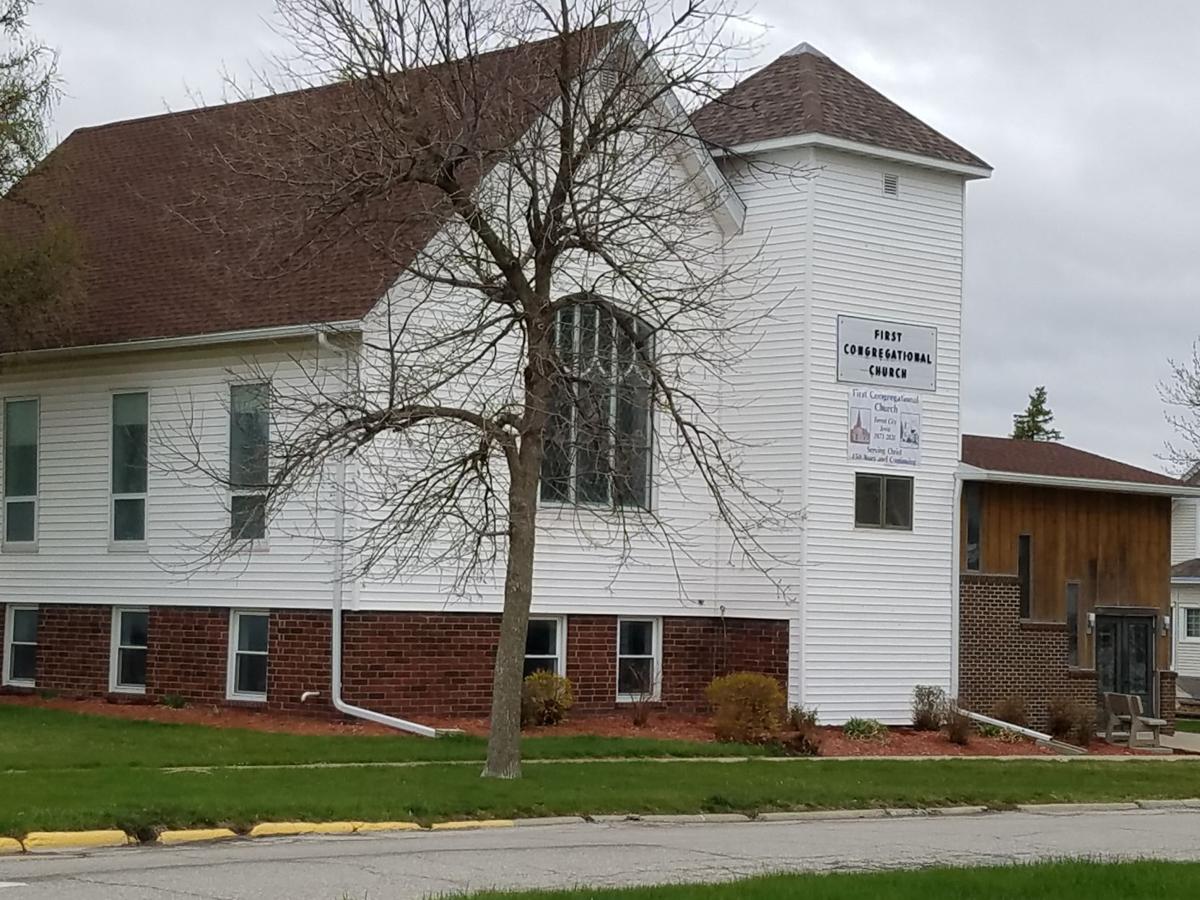 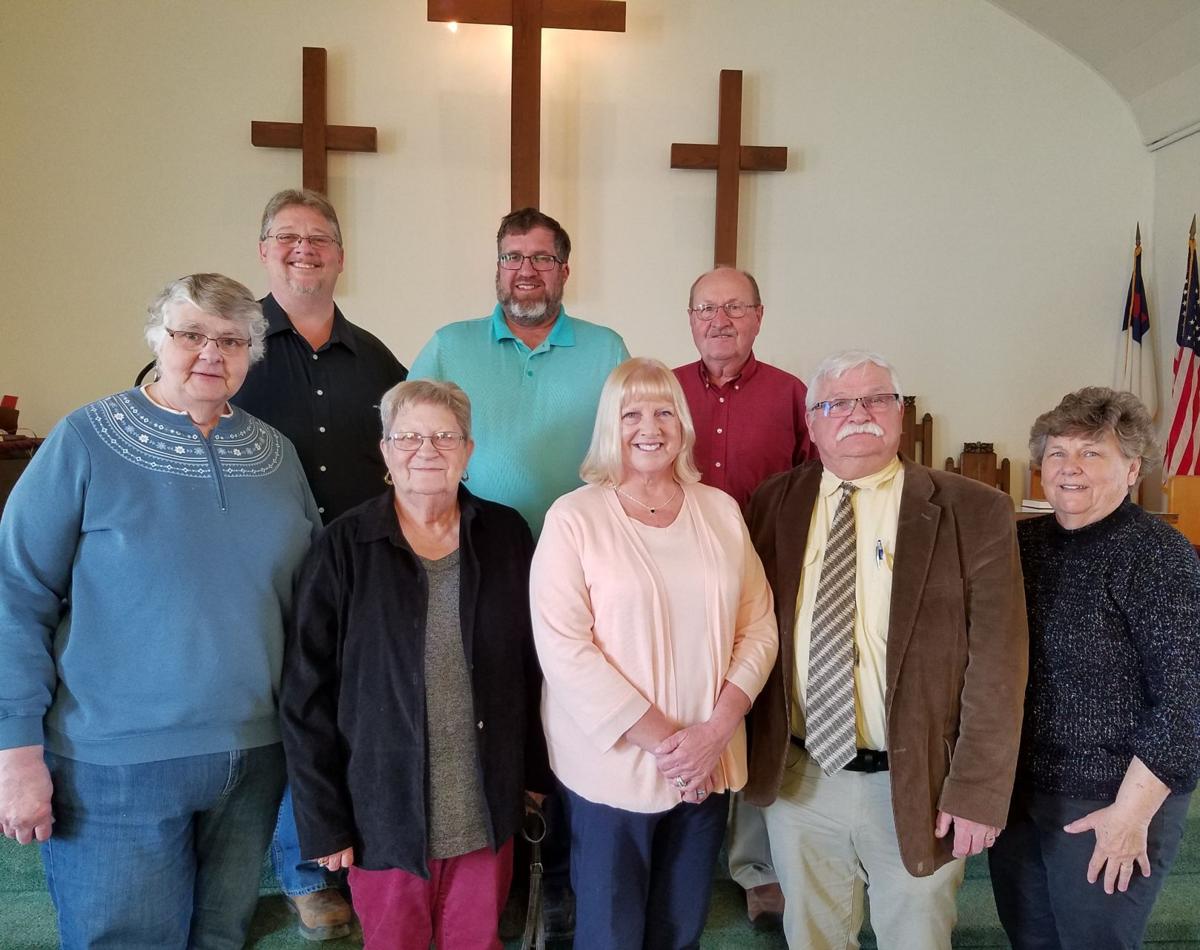 First Congregational Church Board 2021 includes, in front, from left, Christa Cosgriff, Betty Nelson, Vicki Hudson, Pastor Dennis Hudson, and Diane Thompson. In back, from left, Jon Cahoon, Jeff Haugen, and Tracy Thompson. Absent from the photo are Jill Haugen and Jacob Haugen. The church is celebrating 150 years April 30-May 2. 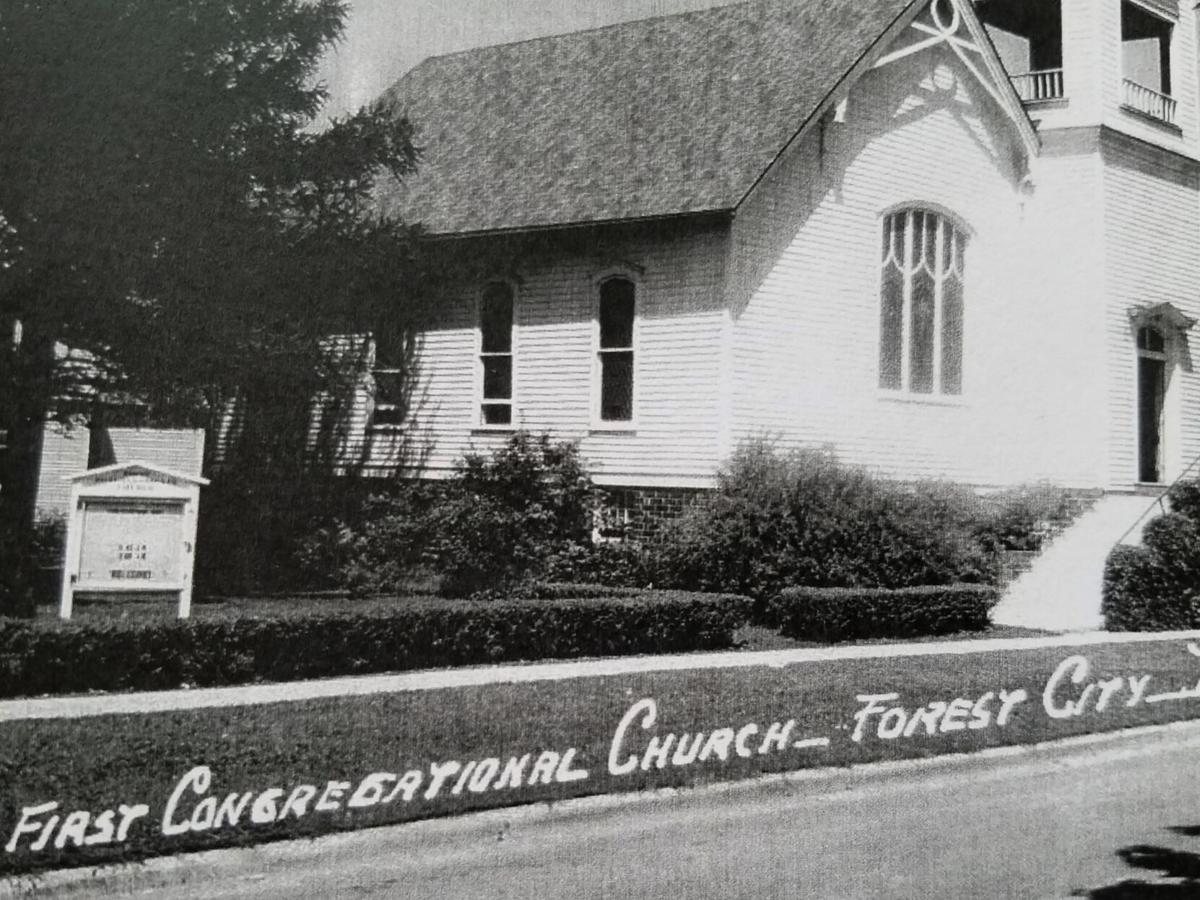 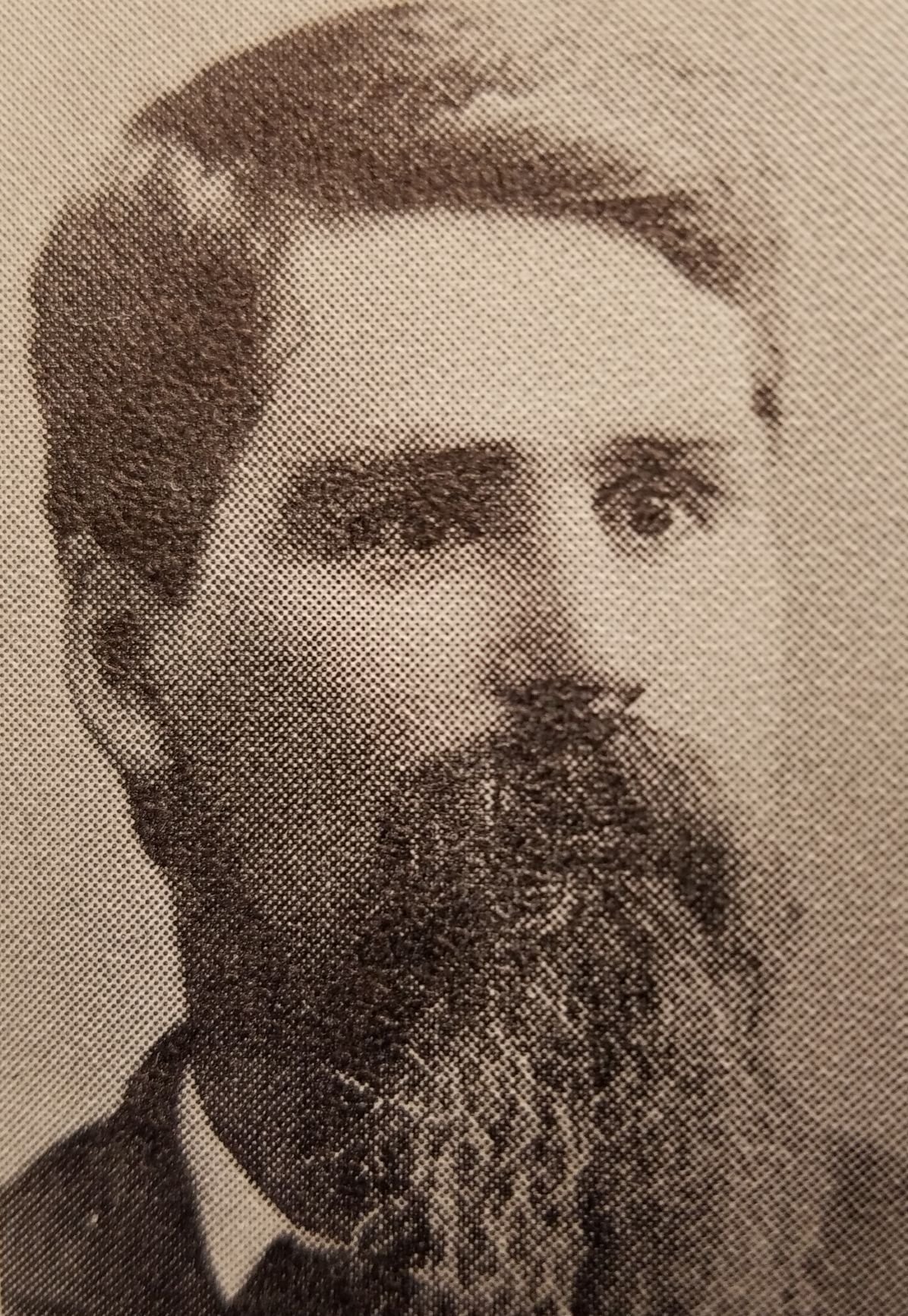 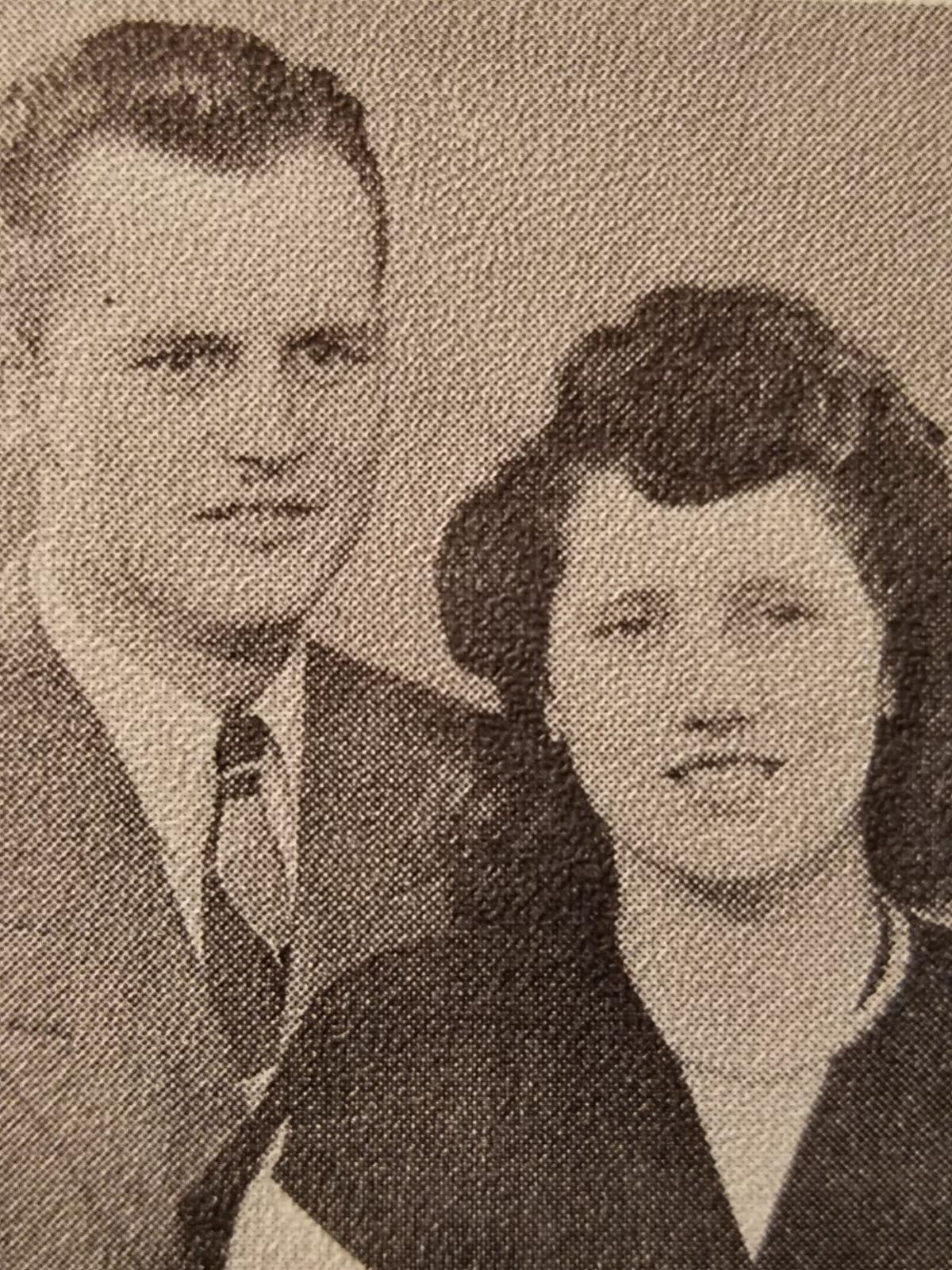 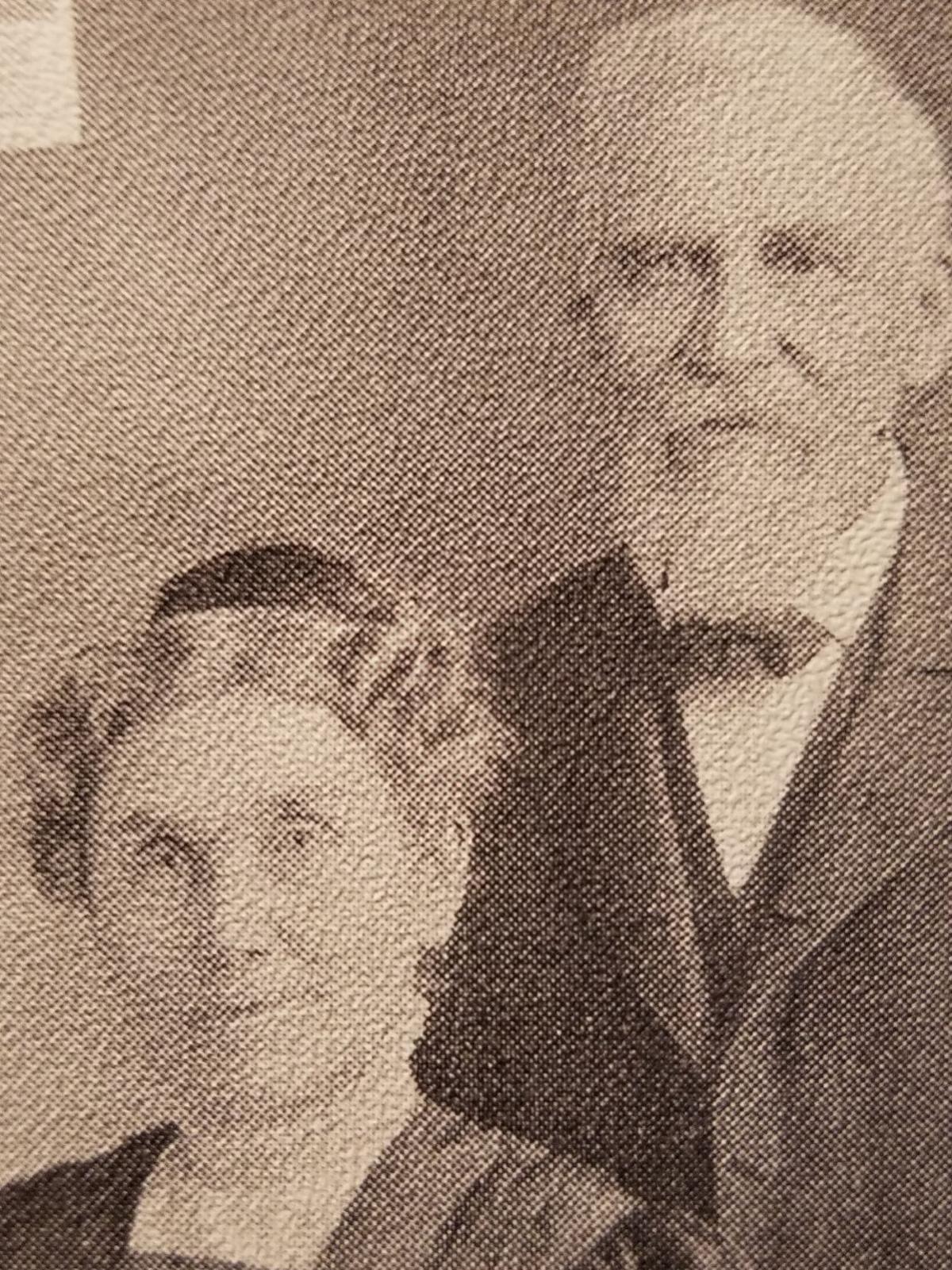 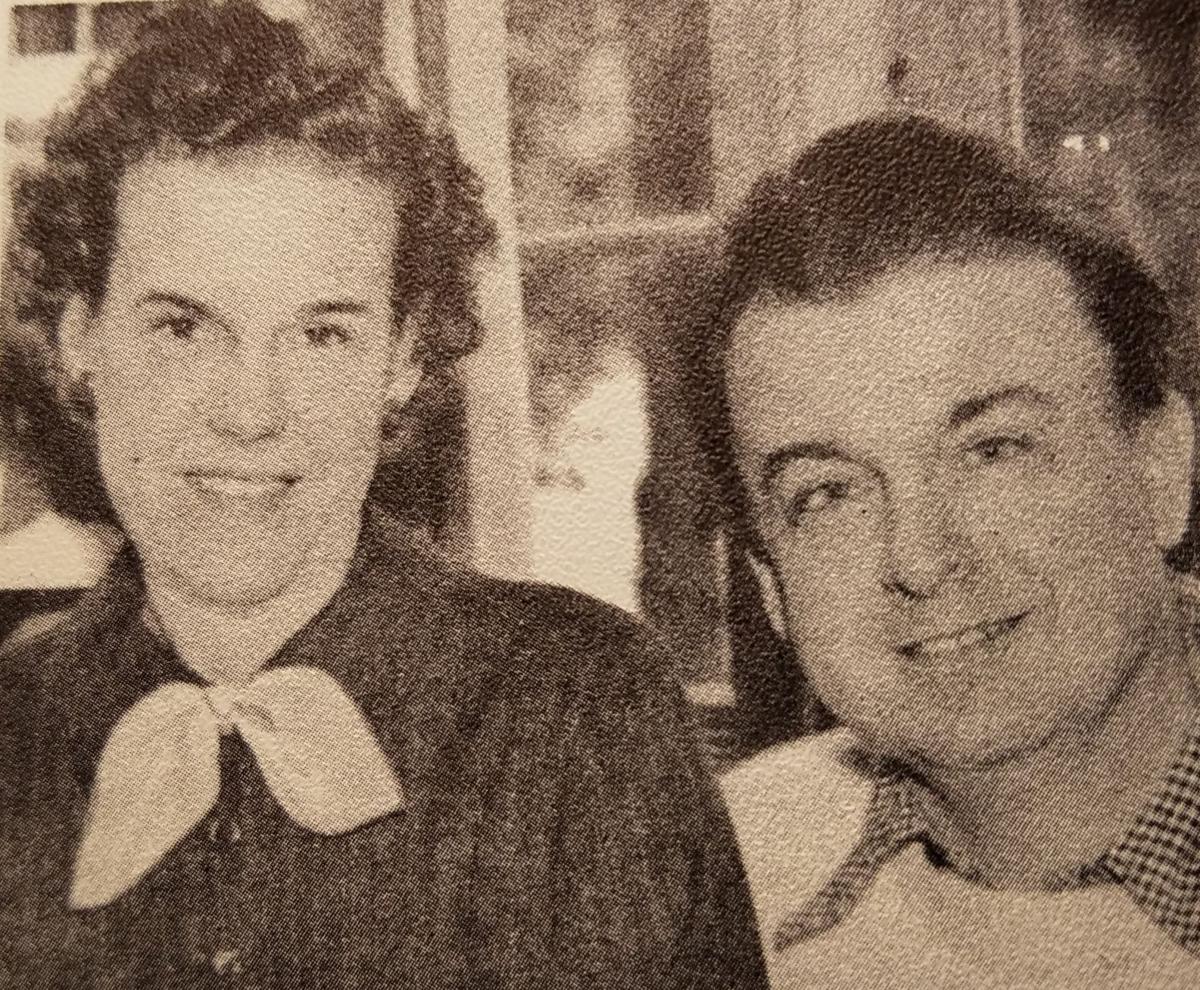 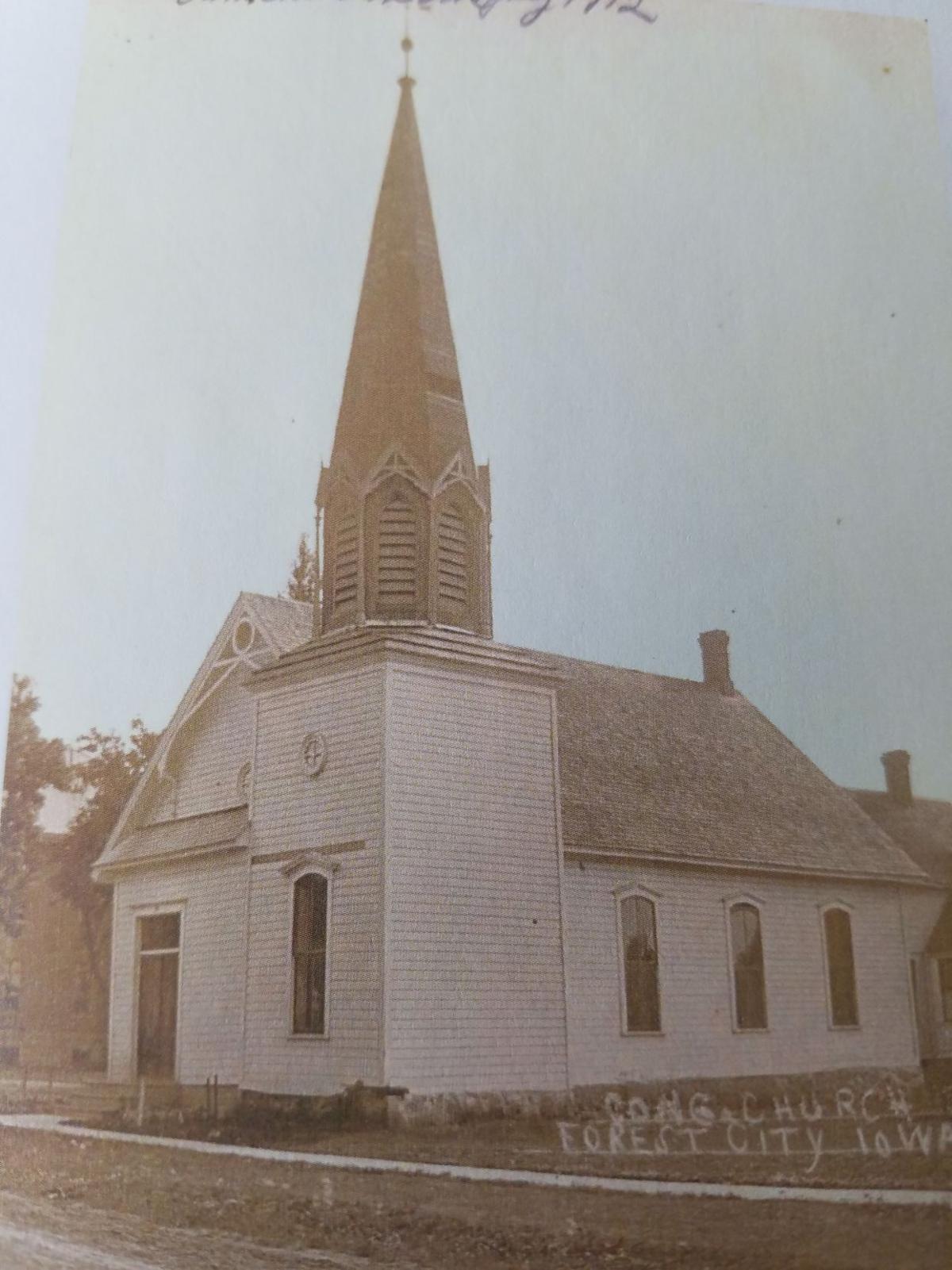 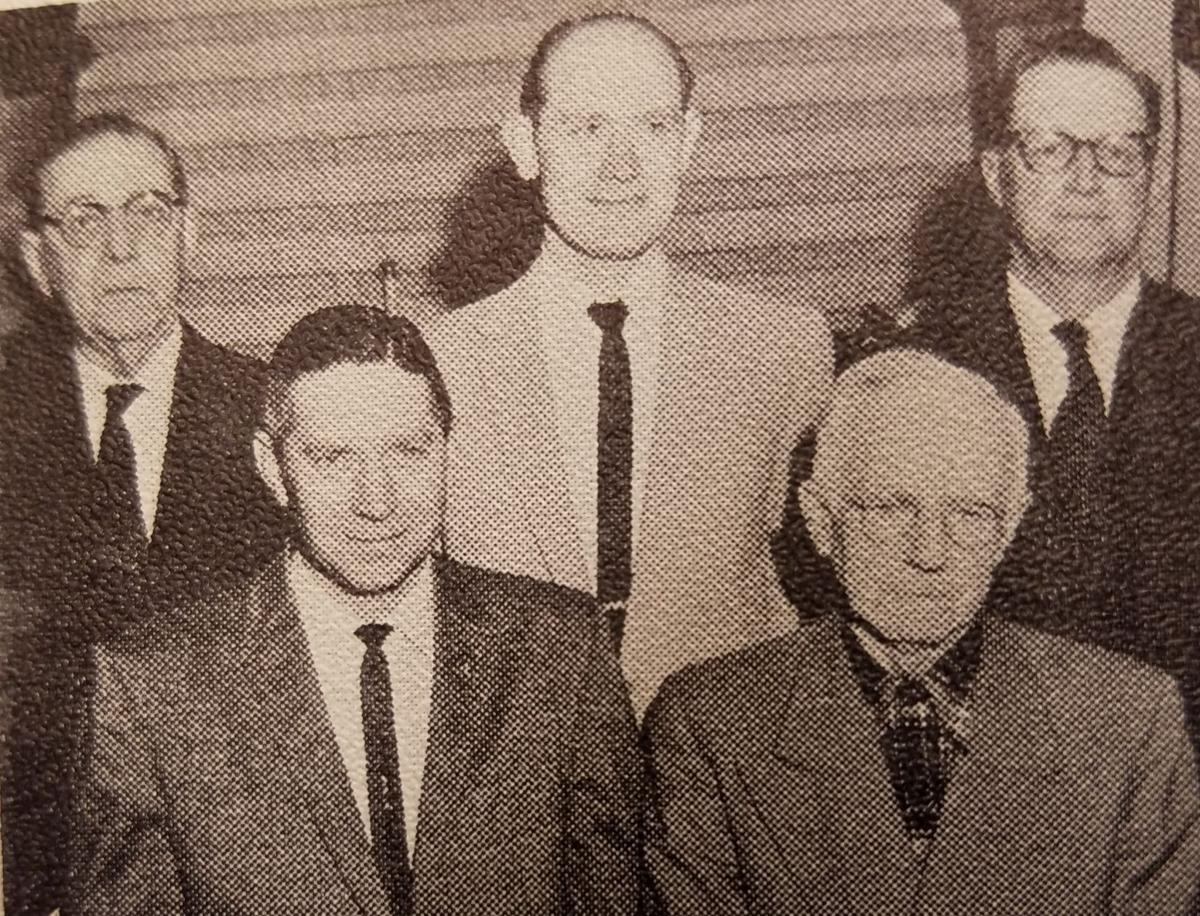 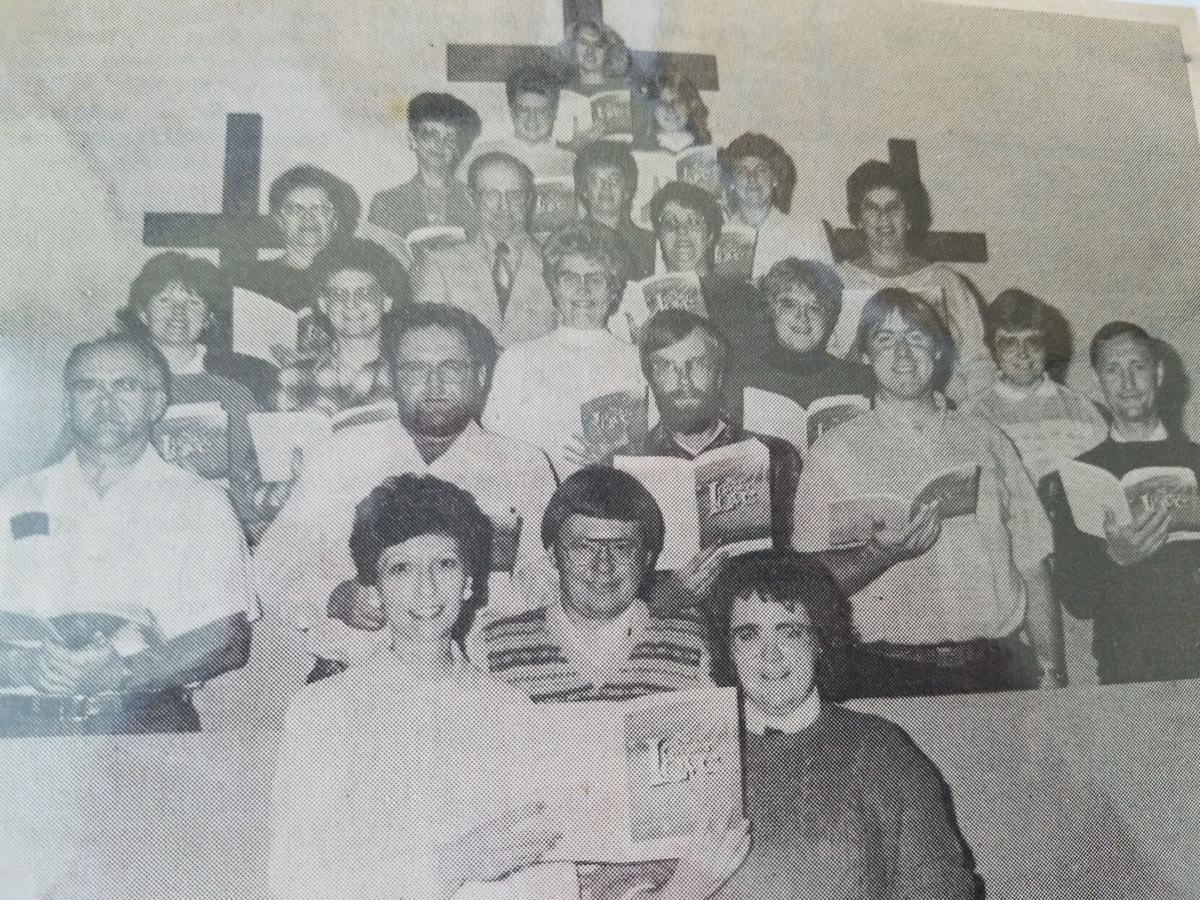 The first community choir and Christmas cantata were held at First Congregational Church of Forest City. 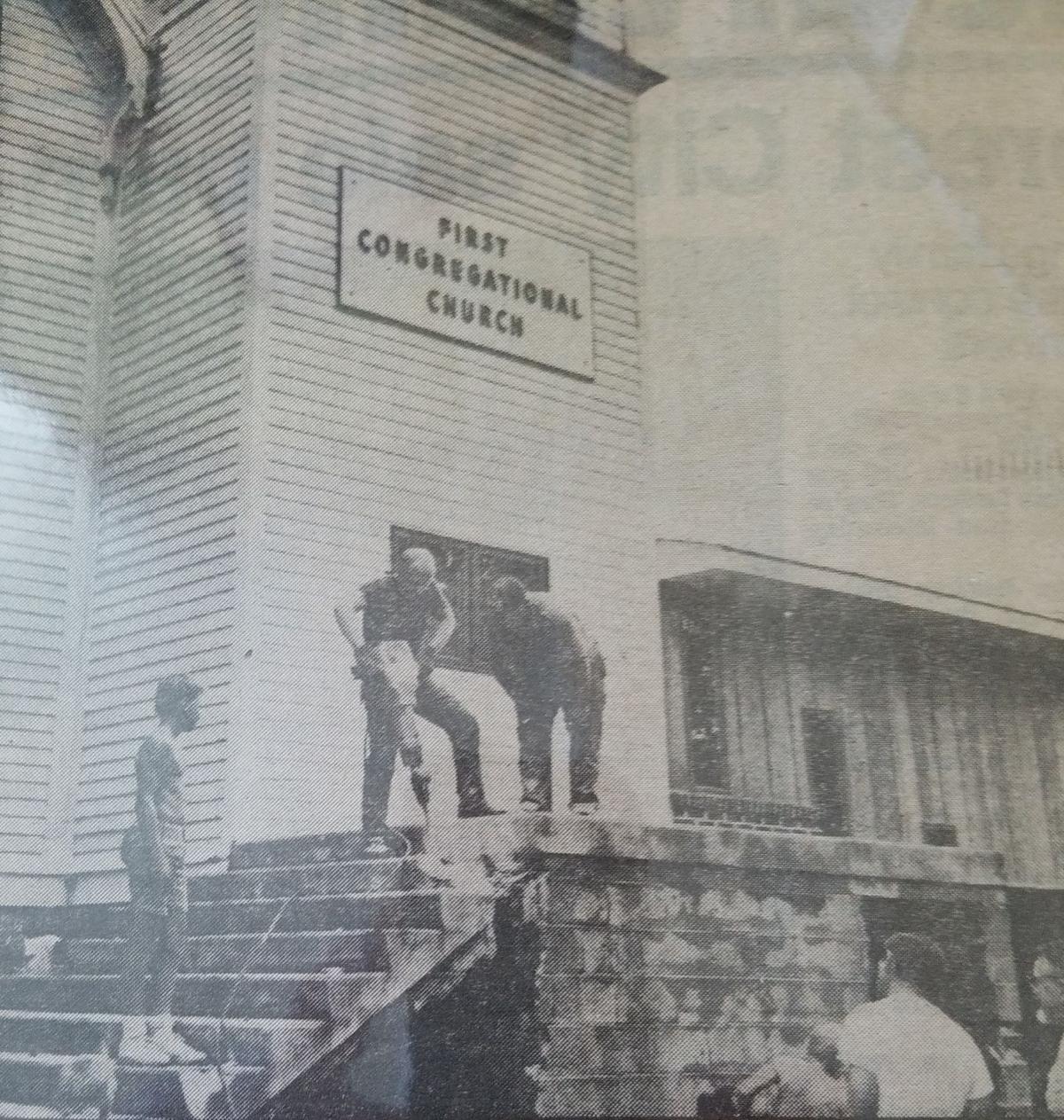 Volunteers took down church steps that stood since 1968 after a new entrance was built many years later.

Something special started 150 years ago.

Dennis Hudson of First Congregational Church in Forest City was named current pastor just this February. But he knows everyone associated with the church places significance on its 1871 founding and storied history.

“A tremendous amount of work has gone into it,” said Hudson, who began serving as church interim pastor in December 2019. “We’ve been making plans for almost a year. It’s a really big thing here. We have a great group of people. We are still preaching the original Gospel message of Jesus Christ and people are getting saved.”

A 6 p.m. ice cream social on April 30 will feature a horse and buggy from the 1800s with Hudson serving as a circuit preacher. The church’s famous ham ball dinner is planned for 6 p.m. on May 1, followed by the play “Kitchen Kackles,” written by Christa Cosgriff.

Sunday service is at 10:30 a.m. on May 2, followed by a salad luncheon. The church basement has a display of 150 years of its history, including music, photos, and scrapbooks for all to enjoy.

“The people in this church have a real heart for Forest City and our surrounding areas,” Hudson said. “During the (1979) flood, they were actively providing things to meet the needs of the community. Our main mission is the same as the church in the Book of Acts, which is to spread the Gospel and also to provide help to people whenever and wherever we can.”

Hudson noted that the May 1 dinner is an invitation-only event, due to limited space, but he invited members of local communities to stop by and share in other aspects of the celebration.

“Our hope is for a great turnout and also that the people of Forest City and the area will be supportive and that we will be a blessing for people,” Hudson said.

The Forest City Council has been supportive, approving the closing of the half block of North 6th Street adjacent to the church for the ice cream social on April 30.

Rev. Ozias Littlefield led the first services by a Congregational minister in Forest City in the summer of 1866. Rev. A.S. Allen was the pastor of the Congregational Church in Clear Lake. He went to Forest City once a month to preach to the villagers beginning in 1869.

The small congregation first met in homes, the courthouse, and the school. On April 30, 1871, the church was organized with six charter members. It was the first English-speaking church in Winnebago County.

Father Ephraim Adams, State Missionary of Iowa, and nine other young ministers who graduated from Andover Seminary in Massachusetts formed the "Iowa Band."

“If each one of us can only plant one good permanent church, and all together build a college, what a work that would be,” wrote Adams of the Iowa Territory. The Iowa Band arrived in October 1843 to establish Congregational churches and schools.

Rev. Allen continued his preaching visits until the fall of 1873. Rev. James D. Mason began his pastorate January 1, 1876, becoming the first resident pastor. Funds were needed to build a church.

Mrs. W.A. Burnap volunteered in 1876 to go back East to secure aid. She visited poet Henry Wadsworth Longfellow at his home in Cambridge. He gave the church a large pulpit Bible. Longfellow inscribed “Presented to the Congregational Church of Forest City, Iowa” with his name. This Bible remains a treasured possession today.

“He was so moved by the devotion of the Forest City Congregationalist that he sent his big Bible to the church,” said present-day Pastor Hudson of the historical highlight.

Father Adams and Rev. Truman Orville Douglass were present at the dedication. Furniture was meager, consisting only of the pulpit, organ, and a few necessary chairs. The building was inadequately lit by small kerosene wall lamps. Mr. and Mrs. Jasper Thompson donated for two chandeliers and helped secure the church bell.

From 1901 to 1905, there were five preachers. The church became disorganized and by 1905 entered a time of depression. Members were leaving. Insufficient funds hampered ministers in their work.

Rev. John McLain of Chicago left after just a few weeks in 1917 to engage in war work. In May 1920, Rev. Southgate of Algona, State Conference representative, tried to resurrect the church.

The church clerk soon wrote a letter to Rev. Hardcastle advising of a decision to disband the church. The Missionary Board of the Iowa Conference held a meeting in Grinnell and decided the Forest City church should not close since it was a missionary field.

Rev. Hardcastle led through the crisis. Rev. W. J. Suckow began May 1, 1921, served seven years, and saw 100 new members join. He began with only 38 members. His first sermon text was Nehemiah 4:6, “For the people had a mind to work.”

The church building was remodeled and placed on a new foundation in 1924. The basement gained a dining room and kitchen cupboards. A north-side addition was built and stained glass windows installed. On January 20, 1925, the church was rededicated.

In September 1954, Rev. Thomas Rebentisch came and served until April 1959. Remodeling of the church was completed. Mr. Rebentisch was ordained in the church in October 1954.

The retired Rev. Bryon Wright, served as interim pastor from June 1959 to May 1960. Dr. John C. Eichorn started on May 8, 1960. He had one of the largest youth groups, 36 teenagers, in the area. Sunday school increased from the low 20s to the 70s. The parsonage was remodeled.

Since 1960, 16 ministers have served the church. Its long-time local radio broadcast was recently expanded to cover the United States. Continuing missionary services include delivering blessing bags to residents and meals to prison inmates.

First Congregational Church Board 2021 includes, in front, from left, Christa Cosgriff, Betty Nelson, Vicki Hudson, Pastor Dennis Hudson, and Diane Thompson. In back, from left, Jon Cahoon, Jeff Haugen, and Tracy Thompson. Absent from the photo are Jill Haugen and Jacob Haugen. The church is celebrating 150 years April 30-May 2.

The first community choir and Christmas cantata were held at First Congregational Church of Forest City.

Volunteers took down church steps that stood since 1968 after a new entrance was built many years later.