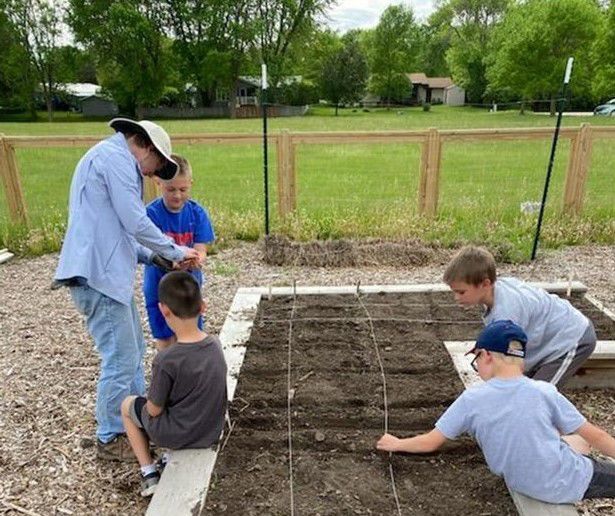 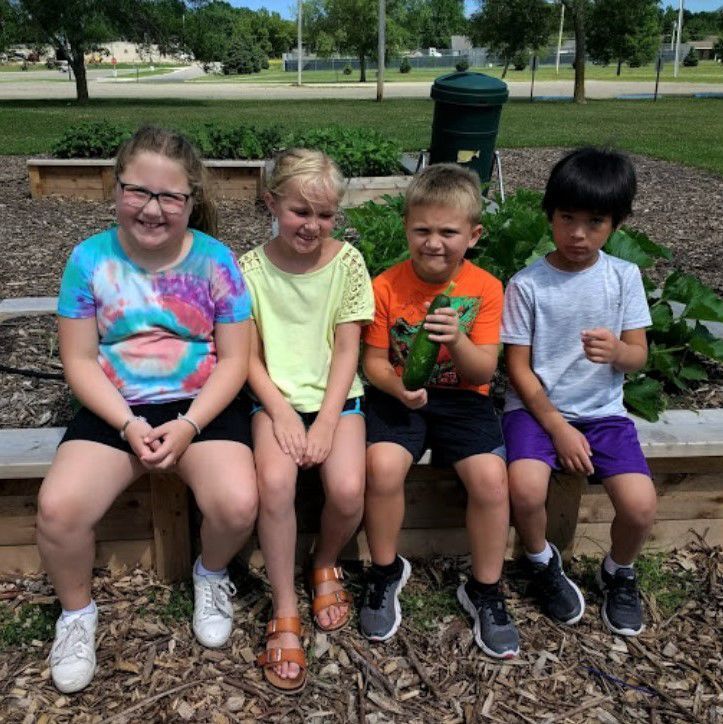 YMCA kids that picked the first vegetable of the season last year showed off that zucchini. 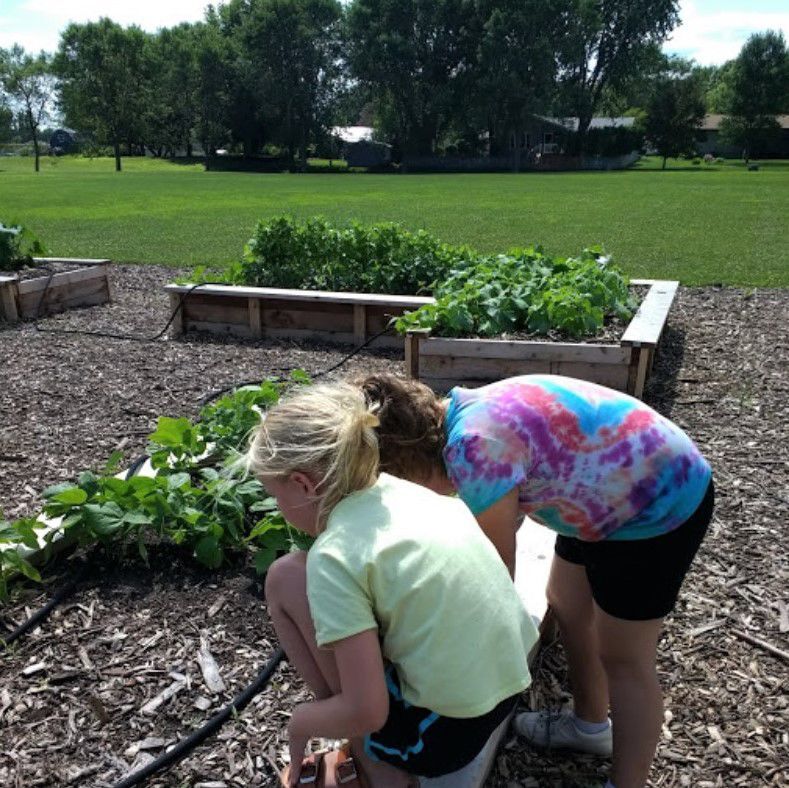 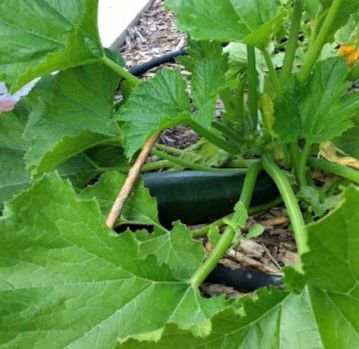 The joy of harvest is yet to arrive this year with planting of the Forest City community garden recently just completed. Zucchini was the first vegetable picked by YMCA kids last year. 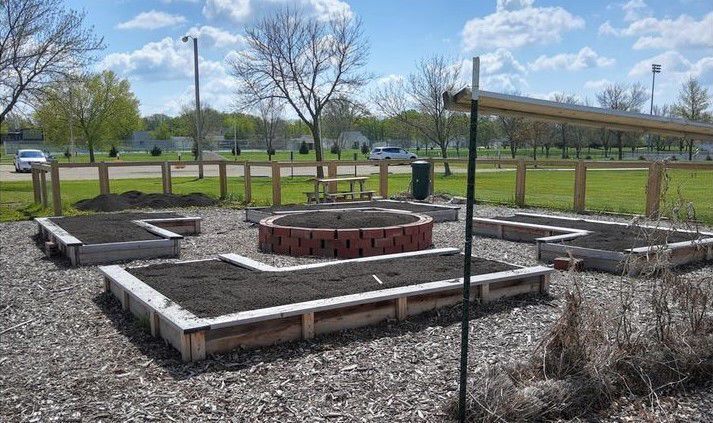 Large L-shaped community garden plots encase a round flower bed in the center. Angela Hall provided and helped install bricks from an old barn for the unique garden centerpiece. 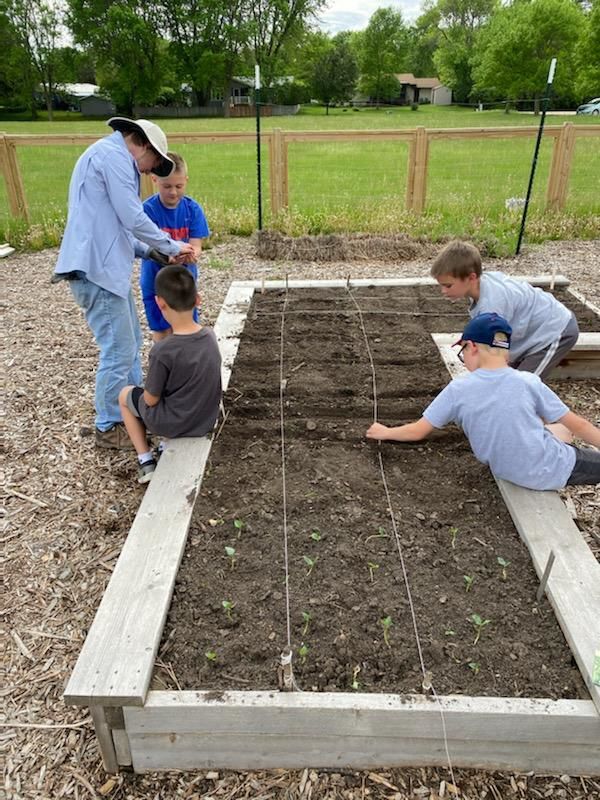 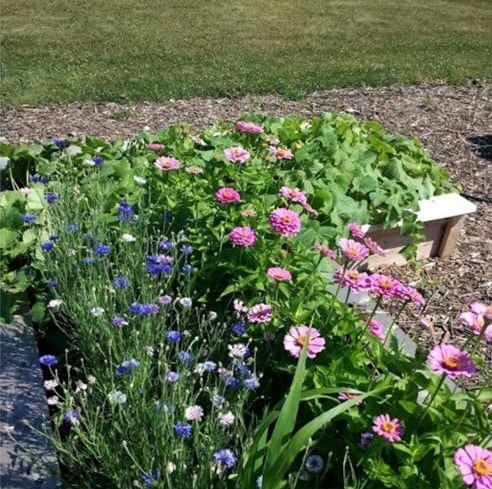 Young boys and girls in the Forest City YMCA Kids Club have planted a wide assortment of fruits, vegetables, herbs and flowers in the community garden located just east of the YMCA parking lot.

The garden is open to members of the public, who are encouraged to visit or help in its maintenance.

YMCA healthy living coordinator Betsy Marmaras said all the children are school age and most of those helping with the garden this year are between age 6 and 9 years old.

She said many of about 40 children in the YMCA’s before and after school programs this school year helped plant the garden and some of about 20 currently in the summer program are helping to maintain it.

“It strengthens their understanding of the origins of food, from seed to planting to harvesting,” Marmaras said. “The whole process runs from about March and into October. The kids learn pride and ownership in the garden.”

She said it truly is a community garden for the benefit of the wider community, offering fresh food for everyone.

“We only ask that if people want some of the produce, please do some work here to help keep this going,” Marmaras said. “A good number of people from the community do come to help with it. They often stop by when kids are in activities or swimming lessons. It’s been good. People have been sharing in this and helping to take care of it.”

The garden consists of four large L-shaped plots, plus a seven-foot round flower bed in the center. Angela Hall donated and helped install bricks from an old barn for the unique garden centerpiece.

The garden includes a tilled area for pumpkins, cucumbers, and strawberries. Herbs being grown this year include oregano, basil, and thyme. Among perennial flowers are cone flowers.

“This year, we planted seeds in April,” said Marmaras, who is also a personal trainer and adult fitness instructor at the YMCA. “We have tomatoes, broccoli, peppers and cabbages all from seed. We put them on the deck in the (indoor) pool area and they just jumped out of the (potted) soil in there. The kids watched them grow from seed and put name tags on the plants they later planted outside, which personalized it for them.”

In groups of four to five at a time, along with Marmaras and sometimes YMCA child care coordinator Ava Pauley and other YMCA staff as well, the children started planting seedlings outside during the week of May 19. The following week, they planted potatoes, sweet potatoes, cucumbers, beans, zucchini and wildflowers in the flower bed. This year’s community garden plantings also include yellow squash, carrots, beets, and radishes.

Marmaras said the ISU Extension Office helped with the formation of this community garden three years ago when it was formed. Area master gardener Mary Walk helped with plant selections and the raised garden beds. Walk has worked for Winnebago County Extension and served on its council and was named an Iowa 4-H Hall of Fame Inductee in 2020.

“With the old community garden out by the airport, it got to be too hard to get people to do this out there just because it was too far removed from downtown,” Marmaras said. “A garden was moved to Waldorf, which is still functioning, but we were approached by the city about something more visible and accessible to the community. That’s how we got started.”

Marmaras said the summer program kids are doing a great job of maintaining the delectable treasure that has been planted.

“Ava takes them out to weed the garden and they love doing it,” she said. “They enjoy being out in the dirt and helping.”

YMCA kids that picked the first vegetable of the season last year showed off that zucchini.

The joy of harvest is yet to arrive this year with planting of the Forest City community garden recently just completed. Zucchini was the first vegetable picked by YMCA kids last year.

Large L-shaped community garden plots encase a round flower bed in the center. Angela Hall provided and helped install bricks from an old barn for the unique garden centerpiece.