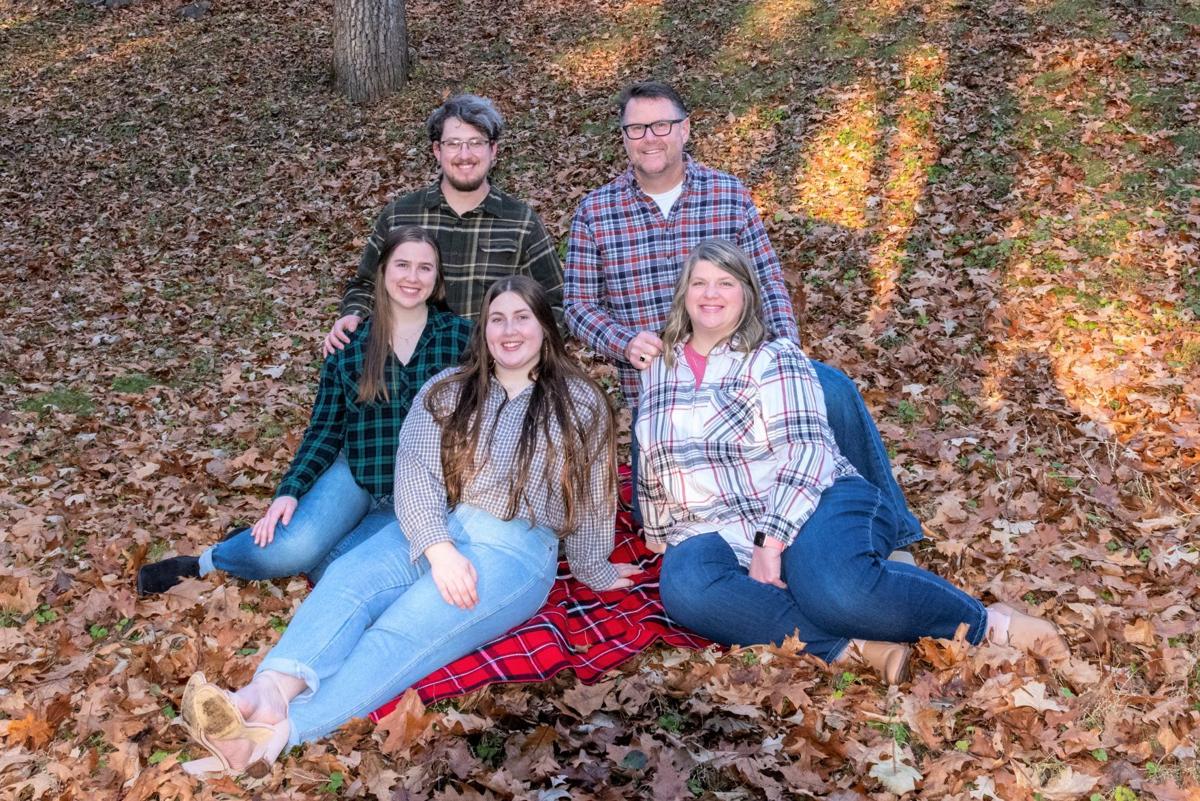 This year's Puckerbrush Days parade grand marshal Andy Buffington and his wife Keila are shown with their daughter Isabella as well as their daughter Madeline and her husband Joe Adamson. 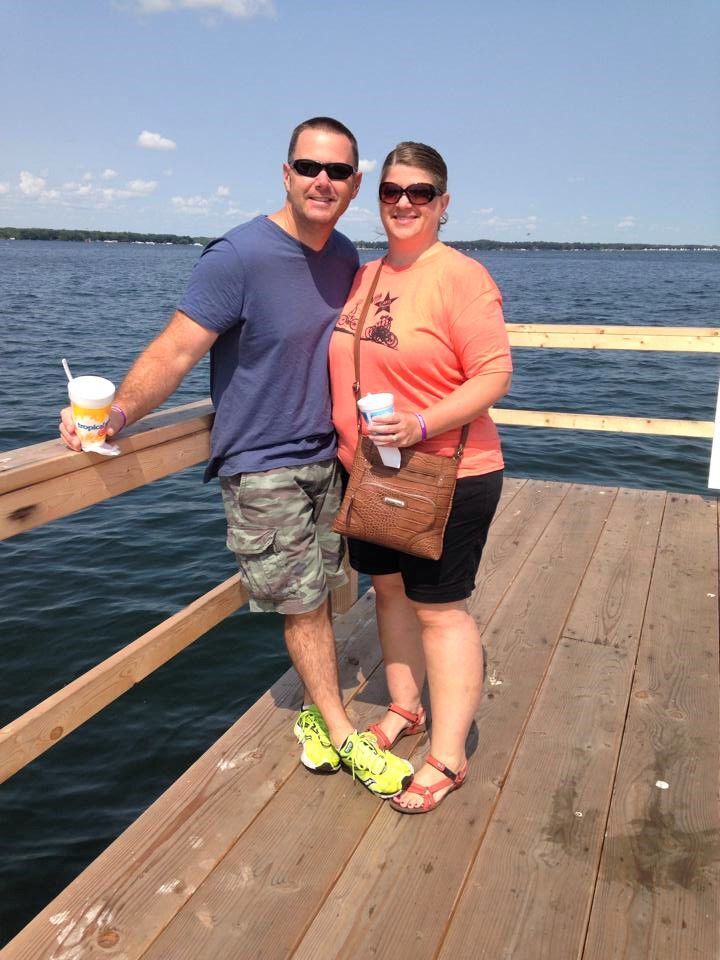 Andy and Keila Buffington enjoy time at Lake Okoboji. A family cabin on the lake is a retreat for them. 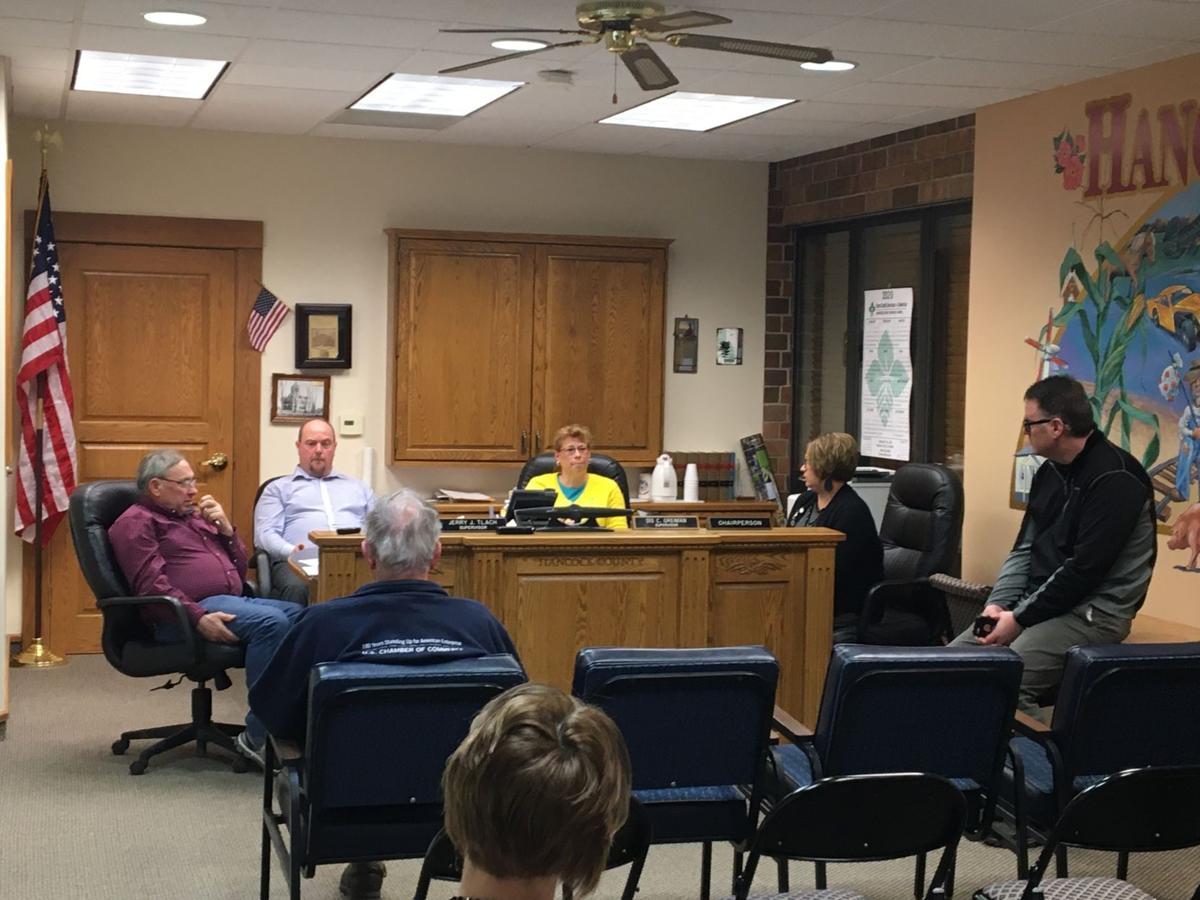 In this file photo, the Hancock County Board of Supervisors hear from emergency manager Andy Buffington (right) during a special meeting.

Returning from a year without Puckerbrush Days in Forest City, due to COVID-19, the selection of Forest City native and resident Andy Buffington as the 2021 parade grand marshal fits like a glove.

Buffington’s father, Forrest Buffington, died last Oct. 18 due to complications from COVID-19. In his capacities as emergency response coordinator for both Winnebago and Hancock Counties, Andy Buffington invested countless hours helping the counties’ public health workers respond to the pandemic, prioritize needs, and coordinate with the State of Iowa.

“Having dad pass from COVID was shocking and sad, just my involvement with COVID before it was a household name,” Buffington said. “I went through a range of emotions, including lots of anger right away. Then, I decided on trying to do the best I could to keep it from happening to anyone else. It did kind of strengthen my resolve. I wanted it to be over, but COVID has not gone away.”

However, the virus has relented to the extent that Puckerbrush Days is returning in its entirety on July 23-24 this summer. Buffington said the real heroes are the frontline medical workers in hospitals, long-term care centers, and emergency response.

“I’m very humbled, very honored,” Buffington said of being named parade grand marshal. “It doesn’t feel like I’m as worthy. I wasn’t in the hospital or clinic setting. I was an information guy, a logistics person. While I carry what I have been able to do on my shoulders, healthcare workers bore the brunt of the weight of COVID.”

Buffington has communicated with and worked on local public/community health coordination with State of Iowa officials, including the Iowa Department of Public Health, and medical officials and staff in both counties.

He has kept members of the media and larger public informed on the latest COVID-19 numbers and recommendations. He has helped coordinate county-side vaccine implementation, distribution, and availability.

He credits employees of the public health agencies in both counties for making public information campaigns during the pandemic successful.

More than a dozen members of a local Lions Club committee make a list of names and narrow it down in selecting the grand marshal for the Puckerbrush Days parade. Cindy Brockhohn of Forest City, who has served as parade coordinator for two decades, is an honorary member of this committee.

“Because of COVID, I think Andy was out there in front and his name came up multiple times,” Brockhohn said. “With the history of father, that only added to it.”

Brockhohn coordinates the means of transportation and movement of the grand marshal and others through the parade. She said Buffington asked to have his wife of 27 years, Keila, with him, as well as a picture of his father on the parade route.

Buffington is a 1988 Forest City High School graduate. He and Keila, who is a Forest City Community School District Board of Education member, considered settling longer-term near Merryville, Missouri, where their youngest daughter, Isabel, is currently a sophomore at Northwest Missouri State University.

However, he took an internship with the Winnebago County Conservation in 1997 and then a job as a jailer for the Hancock County Sheriff’s Department, which led a jail administration position.

“I had no intention of staying at the time, but Forest City is home,” Buffington said. “It is a great place.”

He began working as Hancock County’s emergency response and 911 coordinator in 2000. When a position nearly mirroring his Hancock County duties came open in 2007, the two counties developed an arrangement that enabled Buffington to serve both counties in the capacity. Buffington has also served as planning and zoning administrator for Hancock County.

“The counties are demographically quite similar,” Buffington said. “It’s like Kossuth County in terms of geographical area. I knew the people and types of needs for both counties. The counties also got together and thought they could save a little money doing this.”

He said he has long continued to spend working mornings in Hancock County and afternoons in Winnebago County, so people know where he can be reached, and that he strives to be accessible.

He said while he and public health staff received some harsh and inappropriate calls about not being able to get vaccinated as soon as they would like during the pandemic, he said it was rare.

“An event like this shows that most people, at their core, are really good,” Buffington said. “The vast majority are good and patient.”

In what little free time he has, Buffington said he loves to go fishing and spend quality time with his family, which also includes his oldest daughter, Madeline, and son-in-law Joe Adamson, who resided in Kansas City for several years and are currently touring the Western United States, living in a camping trailer.

Buffington and his family enjoy spending time at a family cabin that his parents (Forrest and Jan) purchased years ago, near the shores of Lake Okoboji in northwest Iowa.

“I like being around water, spending time with friends and my wife and kids,” Buffington said. “I’m a family person.”

He said he and Keila like to explore Iowa’s hidden treasures.

“We like to go find a new place,” he said. “On weekends, we’ll just find a city we’ve not been to before and walk around to see what’s interesting. There’s so much to do within two or three hours of where we live.”

Of being grand marshal for the parade at 10 a.m. on July 24, Buffington said it’s “really humbling that they would think of me that way. I have no idea what to expect because it is my first foray into grand marshal hood.”

He noted that he might like to walk at least some of the route in order to meet and greet people.

This year's Puckerbrush Days parade grand marshal Andy Buffington and his wife Keila are shown with their daughter Isabella as well as their daughter Madeline and her husband Joe Adamson.

Andy and Keila Buffington enjoy time at Lake Okoboji. A family cabin on the lake is a retreat for them.

In this file photo, the Hancock County Board of Supervisors hear from emergency manager Andy Buffington (right) during a special meeting.