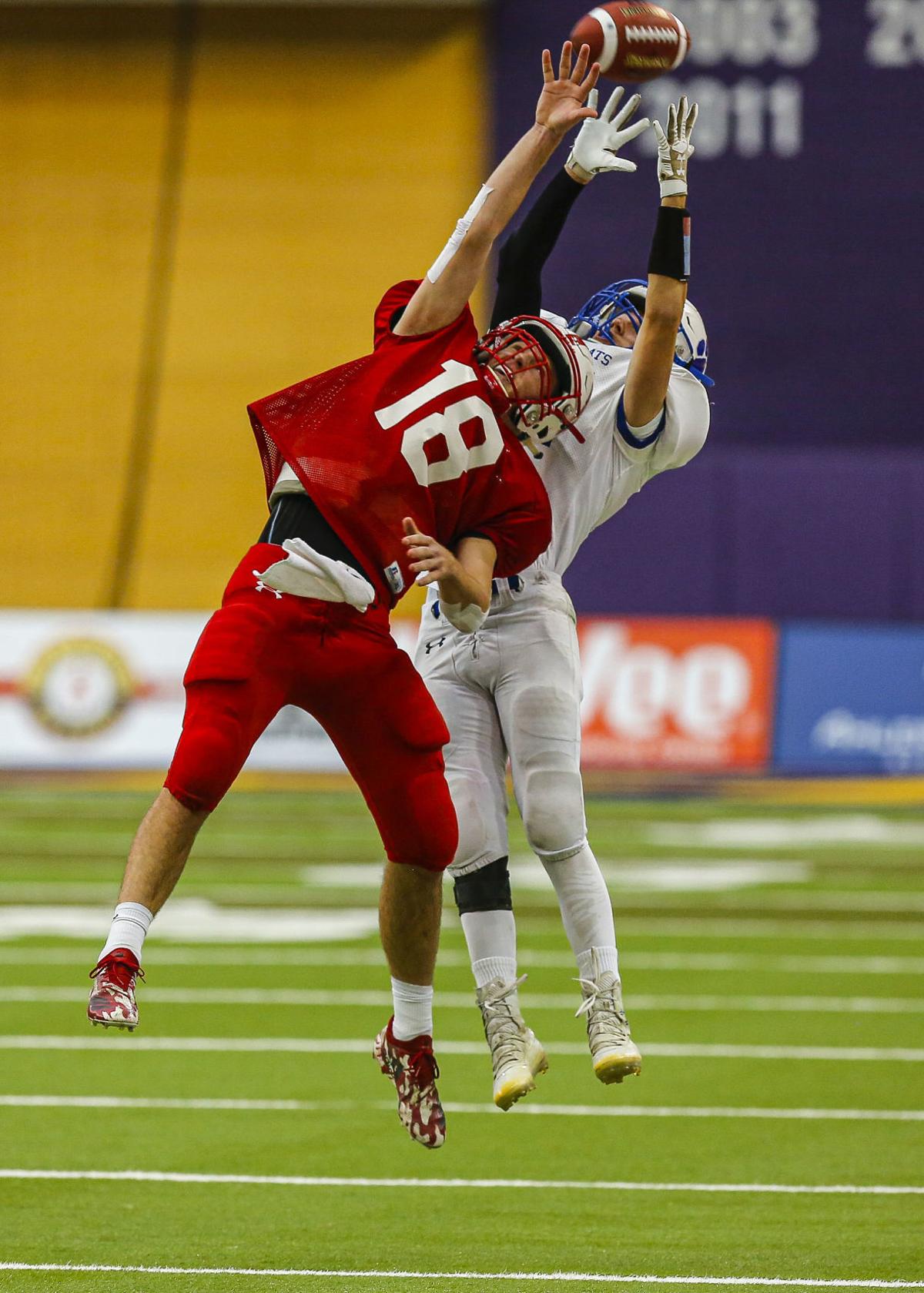 West Hancock senior Brayden Leerar blocks a pass intended for Woodbury Central senior Shawn Archer Friday during the semifinal round of the state football championships at the UNI-Dome in Cedar Falls. 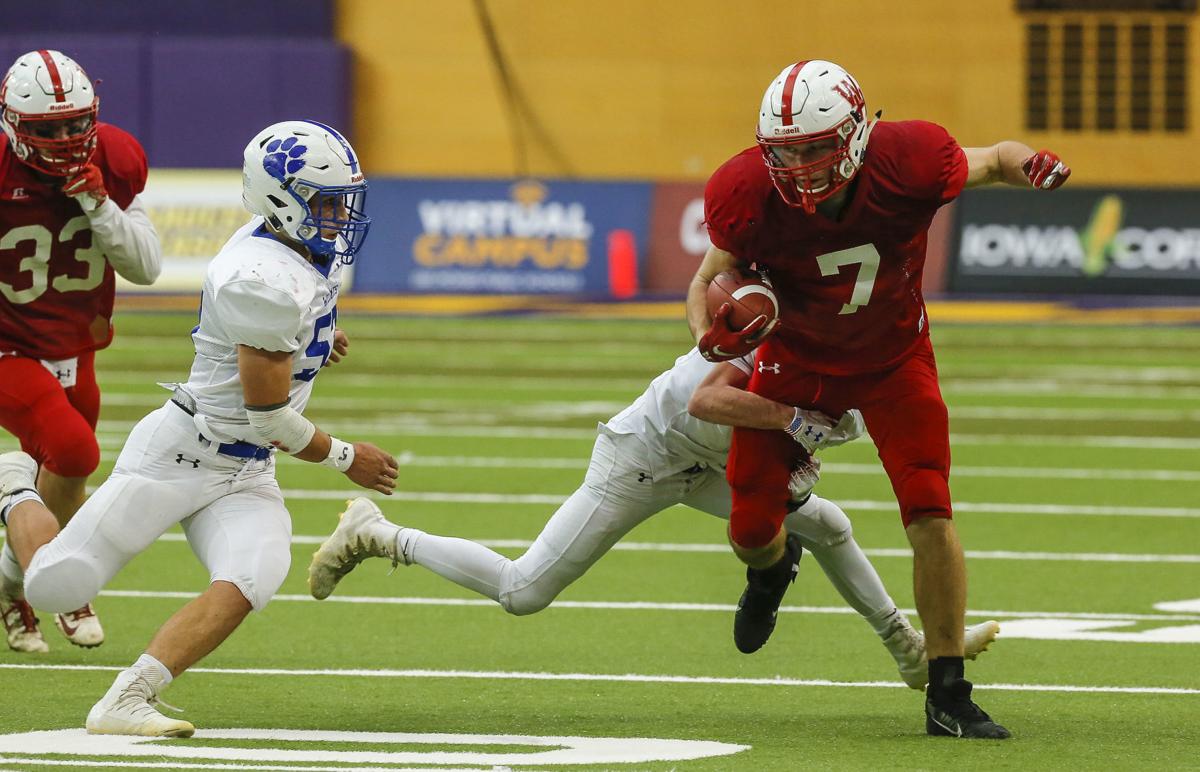 West Hancock senior Josef Smith breaks through a tackle as he runs the ball against Woodbury Central Friday during the semifinal round of the state football championships at the UNI-Dome in Cedar Falls. 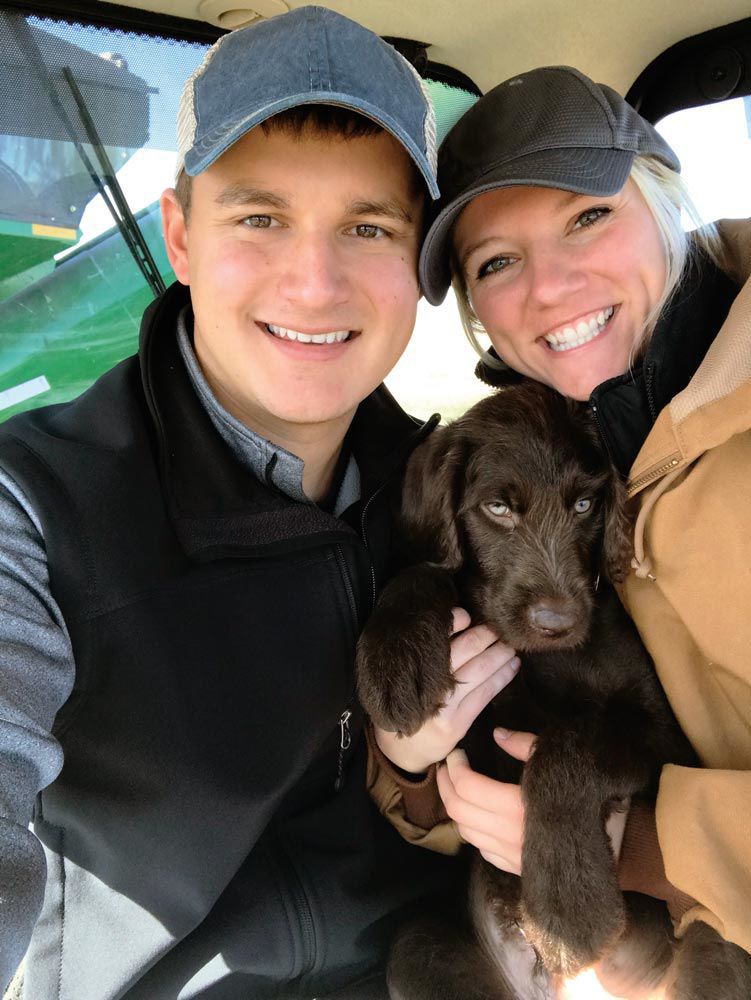 Chris Staudt with his girlfriend and his dog. He was the second place winner of $5,000 to be given to the Kanawha Fire Department.

You can't get enough of those draft horses, Britt. Readers from the Britt area deemed our behind-the-scenes look at the annual show the top story in the Summit-Tribune in 2019. Read on to see the other top four reads of the year, according to our website.

1. Preparing the draft horses before the show

As any draft horse farm owner can tell, preparing a horse for draft horse shows takes a lot of work from the moment the new horse comes to the farm up until just before the start of the show.

Blue Ribbon Days owner Albert Cleve, 71, from Farmington, Missouri, said they have to first break the percherons when they’re 3 years old. After the horse is broke, they take another six months to train the horse to get them to the point where the horse can really go to the show.

“You get them ready to go to shows and from there, you know, as far as right before the show we’ll bring them in and we’ll trim the hair out of their ears, trim the top of the mane there where the bridle goes, the bridle path, and clip any long hair on their face, kind of like shaving a man,” he said.

Once they get the horses to the show location, they’ll wash the horses and get them completely clean, put shoes on them – which Cleve said is part of the training in getting them ready to drive.

To get them ready for a show the day of a show, they take the horse out of its stable, cross tie it and vacuum any dust off its coat, after which they’ll brush the horse all over with a coarse brush and a fine brush.

“It takes, I call it elbow grease,” Cleve said.

Then they paint the horse’s hooves black, braid the manes, putting in a ribbon, put flowers in the manes, tie the tails and put a little bun on it, all before they put the harness on the horse.

“It’d take somewhere around two hours,” Cleve said. “There’ll be about, oh, five, six of us that’ll get them ready. It takes a while, and then of course just hooking six takes 15, 20 minutes.”

To hook the team of horses to the wagon, they have to take the team out and put them on the wagon, run the lines and put the swing pole on, which is the middle, and hook all that up and get the lead team out in the lead, according to Cleve.

When the West Hancock football team finds it groove, it seems like no one can keep it from a win. And after being eliminated last season in the state semifinal game, this time, the Eagles were not going to be denied.

Going up against Woodbury Central in the Class A state semifinal, the No. 1 Eagles scored quick and often. In the end, West Hancock came away with a 49-20 win and went on to bring home the school’s third state title.

"It's something that you have on your checklist the whole time," Mark Sanger said. "It's a lot of work to get back here. It's a long road to get back, but we're back. We earned our spot in the championship."

The festival, now managed by Premier Global Production, or PGP, was moved from Memorial Day weekend to June in hopes of better weather.

PGP operates five other Country Thunder festivals throughout the United States and Canada, including one in Twin Lakes, Wisconsin, and another in Kissimmee, Florida.

An all-star lineup, site improvements and an updated format are some of the changes made by PGP ahead of this year’s Iowa festival.

“Iowa was an easy decision when it came time to expand our brand and the fan experience that we deliver throughout North America,” said Troy Vollhoffer, Country Thunder Music Festivals CEO. “The fans here are incredibly knowledgeable and supportive of the state’s robust country music scene.

“We‘re extremely pleased to be part of that landscape, and we welcome fans from across the region to join this party in 2020.”

Old Dominion, Lynyrd Skynyrd and Kane Brown will headline Friday, Saturday and Sunday, respectively. Complete lineups for each day will be released early 2020.

As part of its “Last of the Street Survivors Farewell Tour,” Lynyrd Skynyrd, a 2008 Rock & Roll Hall of Fame inductee, will be playing all the hits and fan favorites, like “Simple Man,” “Free Bird,” “Sweet Home Alabama,” “Saturday Night Special” and many more.

Algona resident Jessica Weishaar was killed in December during a shooting at Security State Bank in Lu Verne.

Around 8:40 a.m., first responders found Weishaar, 43, of Algona, on the sidewalk in front of the building, dead of a gunshot wound.

Police used eye-witness accounts and video footage to identify the suspect and a vehicle used in the crime. The suspect, Valentino Williams, of Coralville, was apprehended a short time later in a traffic stop near mile marker 158 on I-35 remains in custody.

West Hancock Community Schools and Corwith-Wesley-Lu Verne Elementary School were on lockdown as a precaution after the shooting.

Local seed salesman and farmer, Chris Staudt, was a national-finalist with Corteva Agriscience’s “Power to Do More” contest.

Staudt was chosen because of a photo his family submitted to enter the contest.

He was also showcased in a short documentary film showing Staudt’s farm along with the Kanawha Fire Department.

“This donation would allow the fire department to upgrade equipment needed to help our dedicated volunteers keep our community safe,” Staudt said.

Up to ten finalists were chosen based on a photo submission which were judged on originality/creativity and relevancy.

Staudt’s photo shows him with his girlfriend and his dog.

“They surprised me while I was running the grain cart for my family farming operation,” Staudt said. “I am blessed to farm alongside my father and brother and be able to enjoy the simple things in life while doing so.”

The contest was open to anyone who earns their primary income from farming and runs their own farm, growing at least 250 corn acres.

The care packages sent a month ago to the USS Farragut by the Britt VFW Auxiliary Post 4370 could not have come at a better time, according to…

Hancock County visitors to the Phoenix/Mesa area are invited to a brunch/lunch buffet to meet others from the area.

Britt Chamber of Commerce will hold its annual meeting Feb. 8 at Hillside Golf and Dining in Wesley.

A new online research tool, known as AEA Scout, has been launched by Iowa’s Area Education Agencies and ensures that students and families hav…

The Britt Area Food Bank, formerly located at the Britt Hospitality Room, has made it through the first holiday season at its new location at …

West Hancock senior Brayden Leerar blocks a pass intended for Woodbury Central senior Shawn Archer Friday during the semifinal round of the state football championships at the UNI-Dome in Cedar Falls.

West Hancock senior Josef Smith breaks through a tackle as he runs the ball against Woodbury Central Friday during the semifinal round of the state football championships at the UNI-Dome in Cedar Falls.

Chris Staudt with his girlfriend and his dog. He was the second place winner of $5,000 to be given to the Kanawha Fire Department.