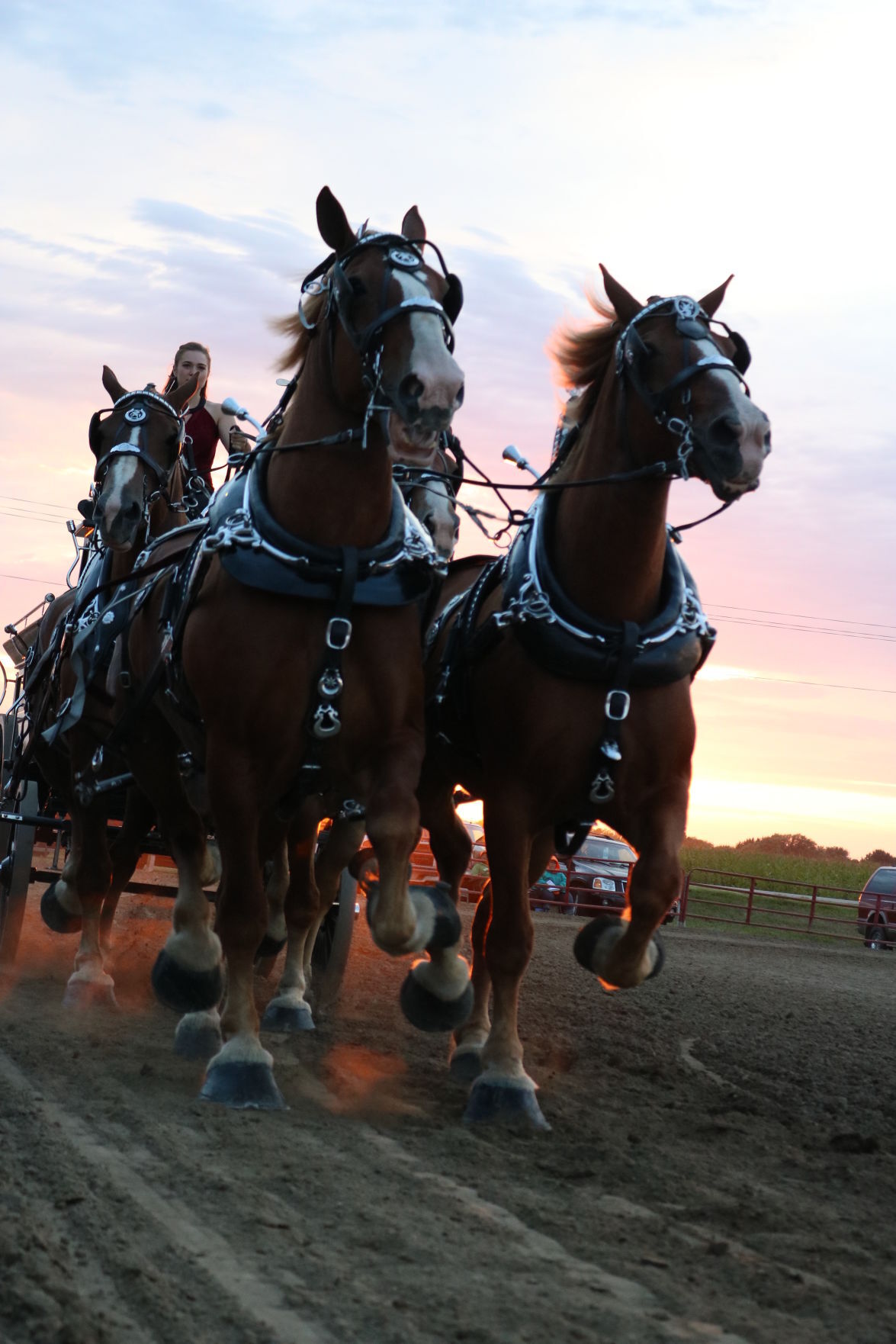 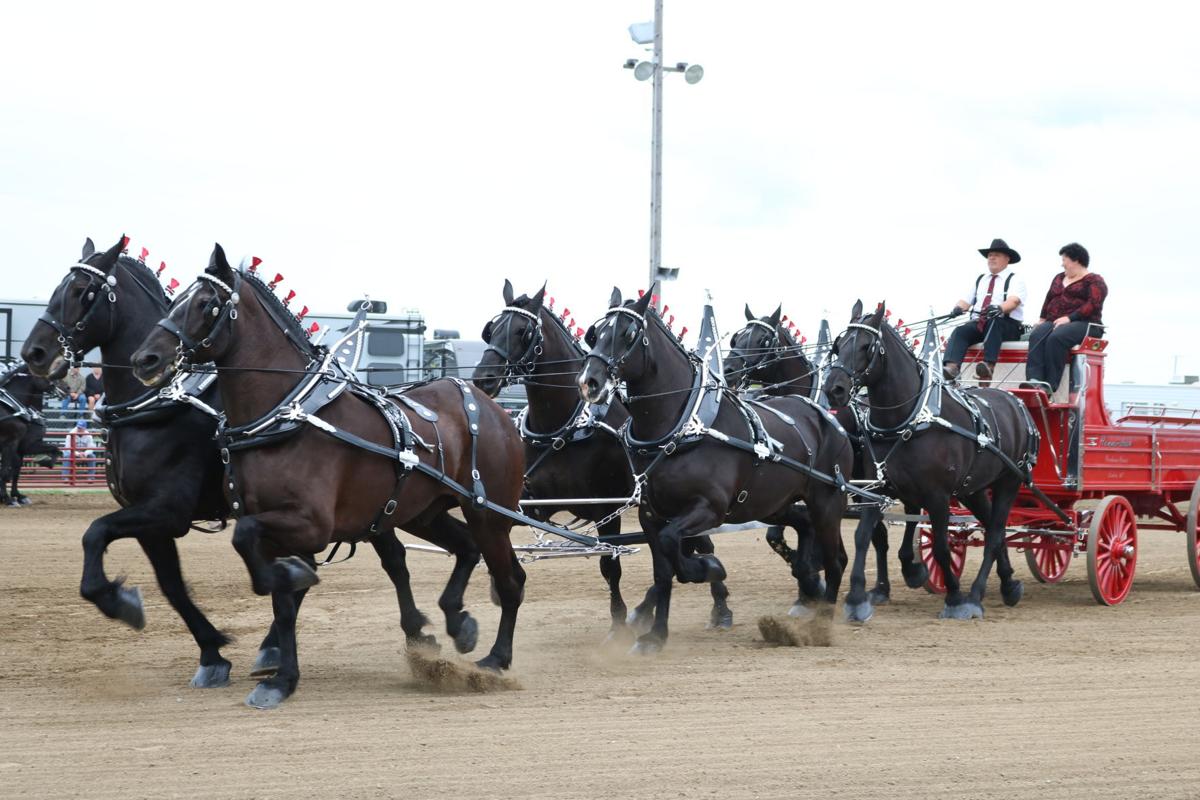 The Hemmersbach Percherons six-horse hitch drives down the middle of the ring during the direction change-up in the 2019 Britt Draft Horse Show. 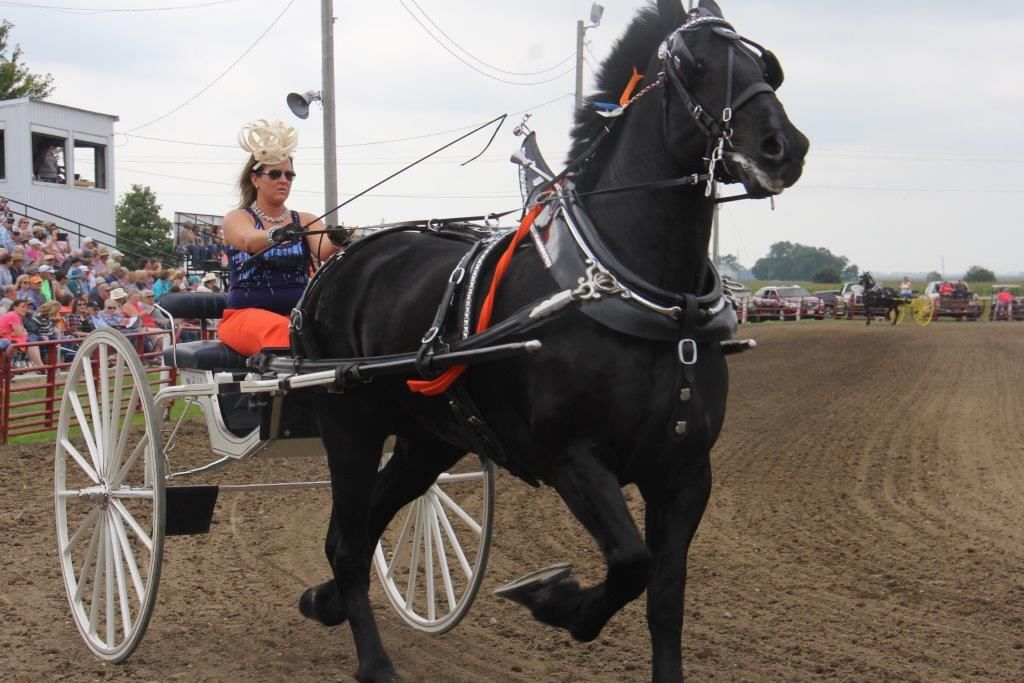 Dr. Christina Wagner was the driver for the Ladies Cart entry for Shining Star Percherons of Urbandale during the 2017 Britt Draft Horse Show. 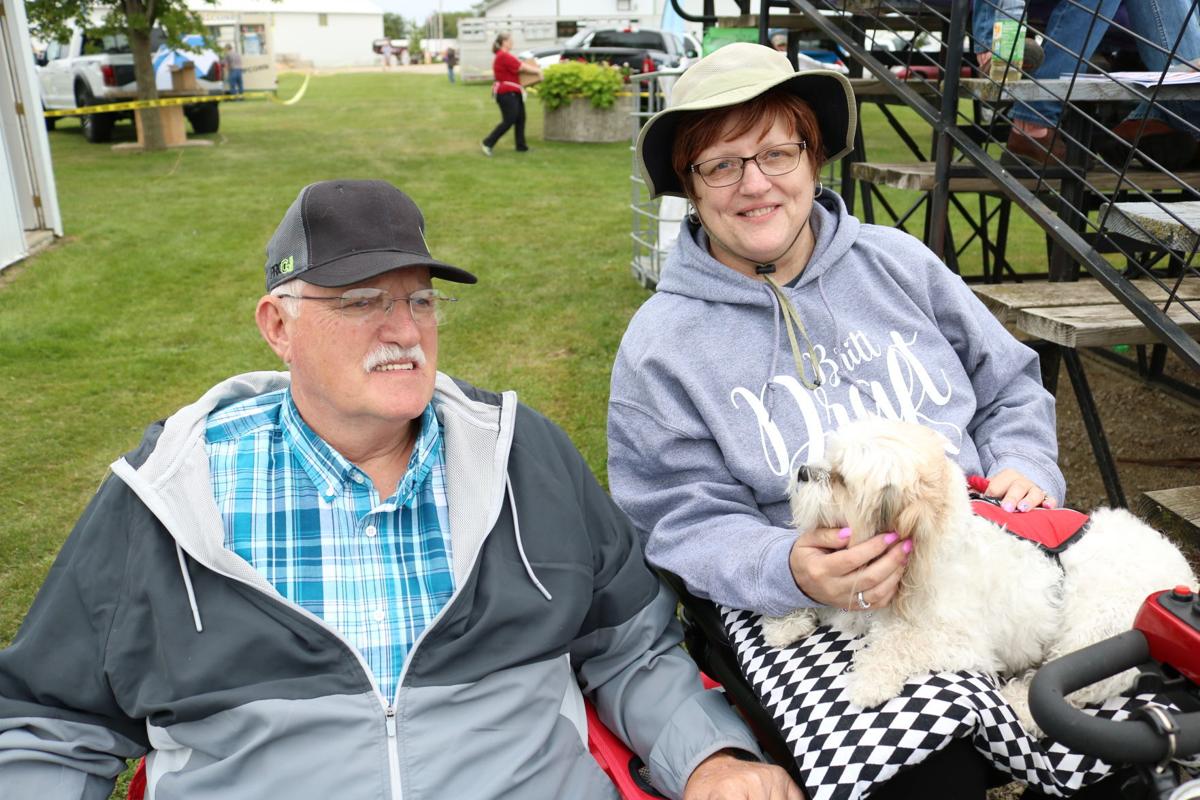 Ervin and Jan Gunderson watch the horses of the Britt Draft Horse Show in 2019, with Jan's support dog, Zoe, resting on her lap. 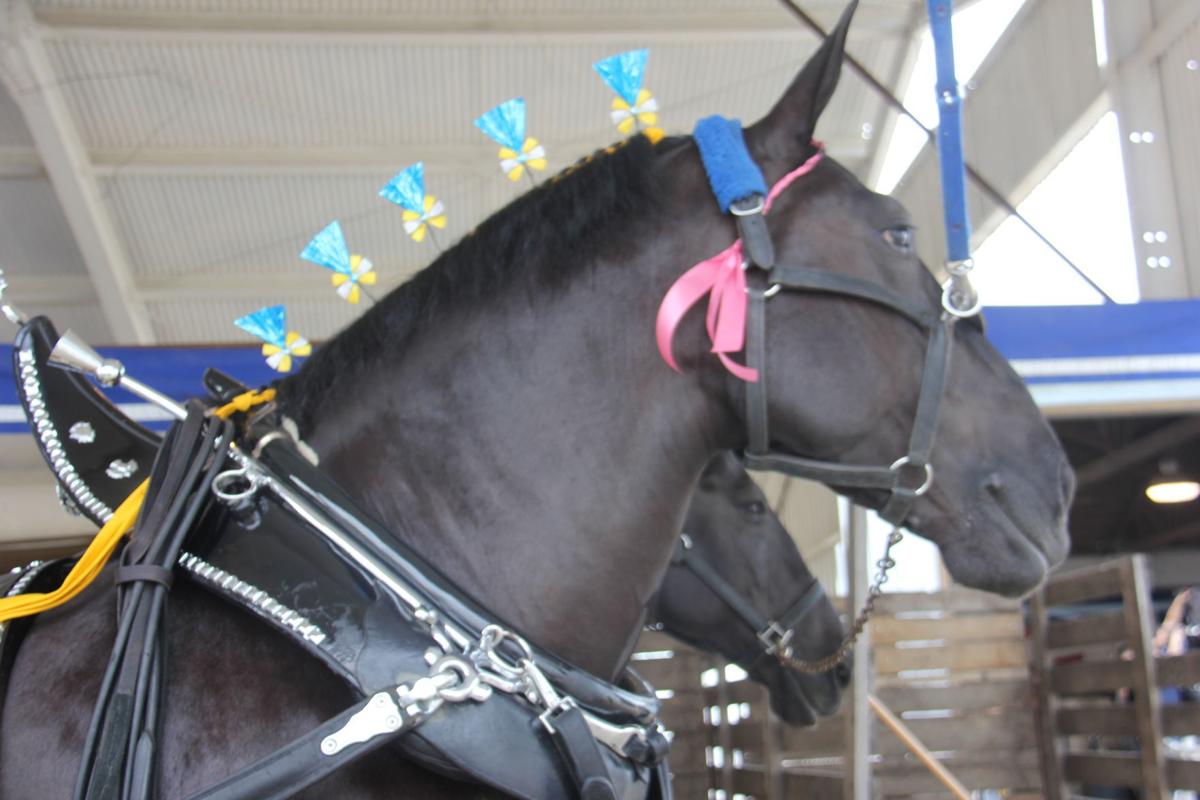 The horses at the 2018 Britt Draft Horse Show were elaborately decorated for competition. 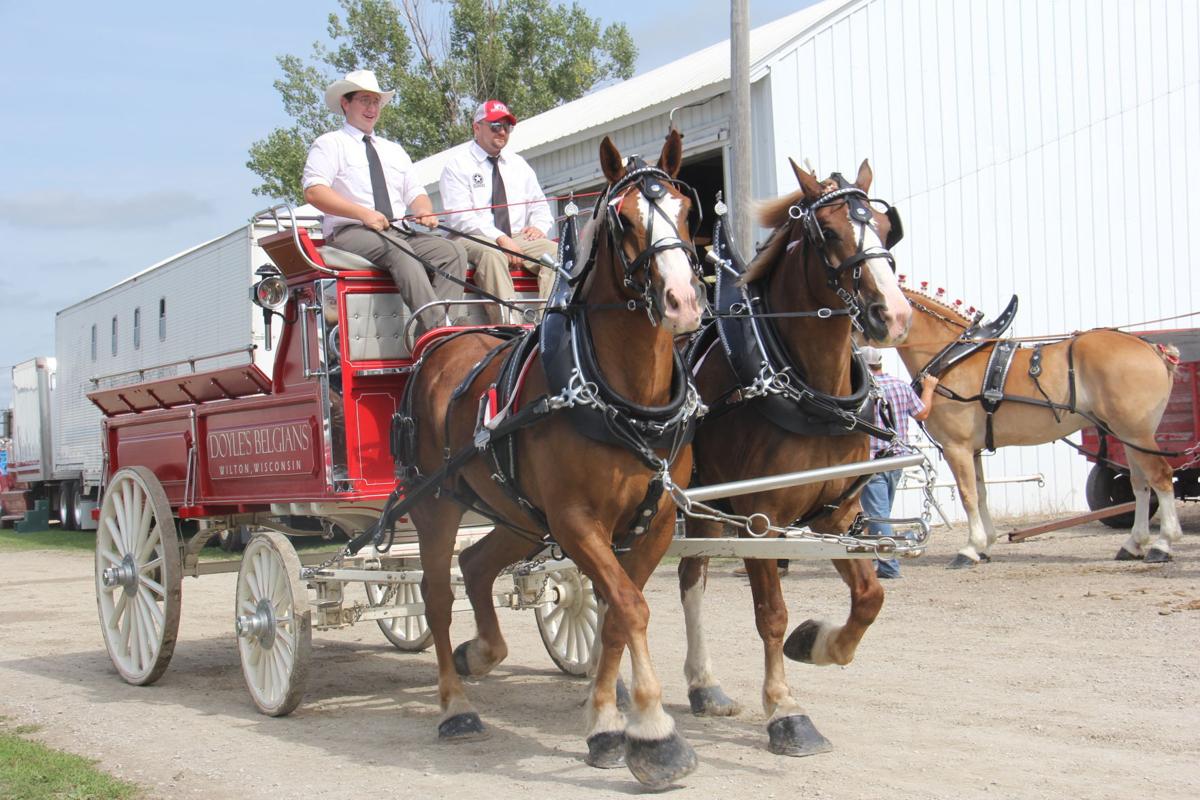 Doyle's Belgians on their way back to their barn after competing in the Team Hitch class during the 2018 Britt Draft Horse Show.

The Britt Draft Horse Show will go on as planned on Labor Day weekend, with a full cast of 18 six-horse hitches set to participate in the show.

The 39th annual Britt Draft Horse Show will be held at the Hancock County Fairgrounds in Britt on Sept. 4-6.

Eighteen six-horse hitches of Percherons, Belgians, Clydesdales and Shires will take to the arena, showing off some of the finest draft horses in North America.

The Britt Draft Horse Association is sponsoring the event, and board member Darin Carlson said they decided to go through with it because they are not overly concerned with COVID-19, though they are taking some precautions for it.

“Just tell people to social distance, and it’s an outdoor event, so I think people can do that to their own safety needs,” Carlson said.

Masks will not be required to enter the fairgrounds, but hand sanitizer will be available throughout the grounds and a cleaning crew will disinfect and spray the bleachers every day, morning and night, according to Carlson.

“It’s kind of a use your own judgment and common sense,” he said. “If you’re sick, please don’t attend, and certainly if you test positive don’t attend. I think most people are capable of doing that.”

Besides the new precautions against the virus, the event will be much the same as it has been in years past, with the commercial building open, food trucks providing lunch on the grounds and camping available, Carlson said.

The Britt Draft Horse Show is one of the few horse shows still held this season, as many were canceled due to the pandemic, according to Carlson.

“We’ve had a lot of interest from a lot of other hitches wanting to come, wanting to show, wanting to get points off our classic series, and we’ll have a full hitch count, a full 18,” he said.

Hitches attend different horse shows around the country to participate in the classic series and earn points, but with many of those shows canceled, each show that still goes on is now a much more precious opportunity to get enough points to come out on top at the end of the season, Carlson said.

“The few shows that you go to are worth that much more, where everybody wants to be on their A game,” he said.

At the end of the season, the four hitches with the most points in each of the three breed classifications, Belgian, Percheron and Clydesdale, will compete in the North American Six-Horse Hitch Classic Series World Finals Championship, which will has been pushed back this year to Sept. 24-26 in Shipshewana, Indiana.

With the finals dates at the end of the month, the Britt Draft Horse Show is one of the last two of the season.

Carlson said he thinks many of the shows decided to close because of the uncertainty they’ll actually have an attendance to make money to be able to put it on again next year.

“I don’t think anybody’s really scared of the corona, it’s just that basically it’s just an issue of whether or not you’ll have an attendance, you know, is what is that risk there,” he said.

The Britt Draft Horse Show, though has seen a lot of support from the community, with 18 individual businesses sponsoring each of the hitches, according to Carlson.

“We really want to say thank you to all of our community support and all of our sponsors,” Carlson said. “That’s kind of our biggest thing, is them supporting us, because we definitely could not do without them.”

Carlson said the competitors are expected to arrive as early as Sunday and as late as Thursday night.

Like many other school districts, Forest City Community School District had its first day of school, and it was similar to a trial run for many students and staff.

All of Kanawha will be under a boil water advisory starting Wednesday, Aug. 26 at 1 p.m.

Work is getting done on the two-year-old Winnebago County Law Enforcement Center to rectify the security and maintenance issues within the facility that were brought up back in January.

The COVID-19 situation is always changing, especially now that it has now been at least six months since the start of the pandemic.

The West Hancock Ambulance Service put on an appreciation barbecue and retirement party to celebrate two of its members who have been in the ambulance service since it was formed and are now retiring.

The West Hancock CSD School Board did not to make masks mandatory in its return to learn.

The Winnebago County Conservation Board received a $250,000 grant and will let bids to construct its Environmental Education Center within the next month.

With the Good Samaritan's outbreak and Waldorf University testing every student on campus, Winnebago County has seen a spike in positive COVID-19 cases.

Black Hills Energy has started its ongoing construction project of moving any meters inside outside in Forest City.

While not an MVP season, sports betting in Iowa is getting good marks for a hit-and-miss rookie year.

The Britt Draft Horse Show started Friday with the youth and amateur show and continued into Saturday and Sunday.

The Hemmersbach Percherons six-horse hitch drives down the middle of the ring during the direction change-up in the 2019 Britt Draft Horse Show.

Dr. Christina Wagner was the driver for the Ladies Cart entry for Shining Star Percherons of Urbandale during the 2017 Britt Draft Horse Show.

Ervin and Jan Gunderson watch the horses of the Britt Draft Horse Show in 2019, with Jan's support dog, Zoe, resting on her lap.

The horses at the 2018 Britt Draft Horse Show were elaborately decorated for competition.

Doyle's Belgians on their way back to their barn after competing in the Team Hitch class during the 2018 Britt Draft Horse Show.