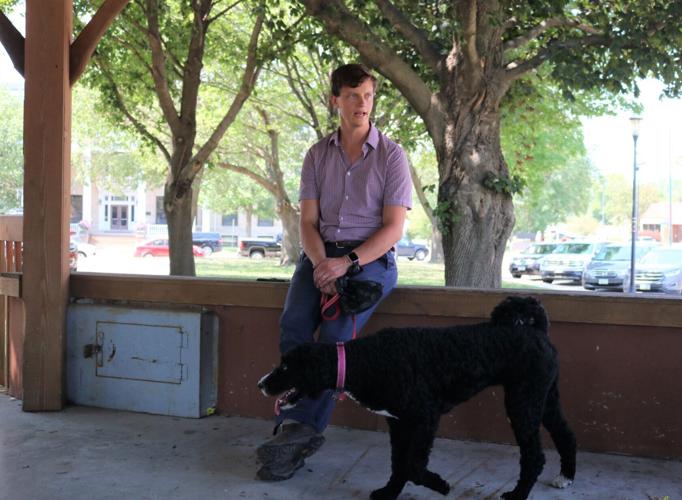 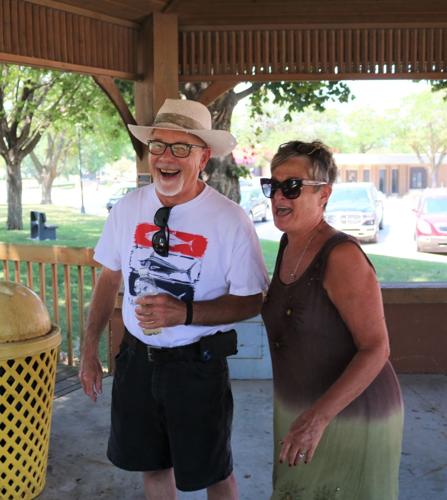 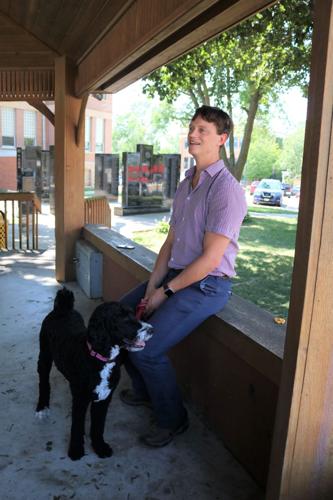 State Auditor Rob Sand speaks in the gazebo on the Winnebago County Courthouse lawn during an Aug. 2 town hall meeting. 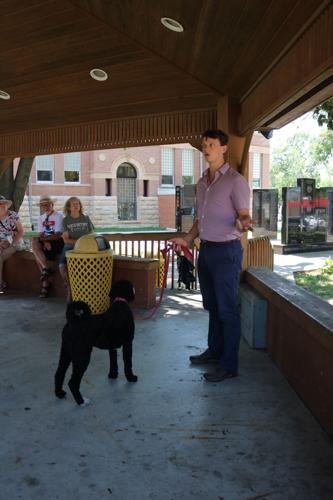 Rob Sand addressed area residents on Aug. 2 with his dog at his side. 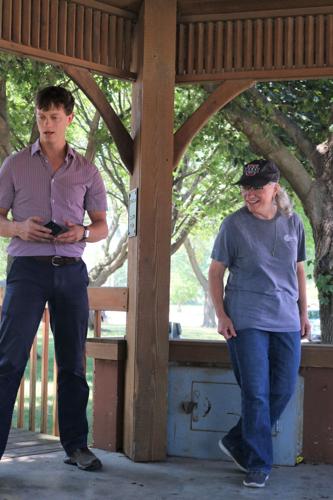 Democratic State Auditor Rob Sand had his nearly 2-year-old dog, Pow, alongside him while touting the watchdog role of his office over fiscal rules compliance in Iowa at an Aug. 2 Forest City town hall meeting.

The meeting was held in the gazebo on the Winnebago County Courthouse lawn.

“That’s our job,” Sand said. “It’s making sure some people in positions of public trust and positions of power have someone that is watching the rules for them. We’re the watchdog… Politics and governance are not supposed to be the same thing.”

Sand, 39, noted that his office has hired and promoted people who made campaign contributions to his opponents.

“We’re critical of Republican s in some of our reports because they did wrong,” Sand said. “We’re also defending some Republicans because that’s what the facts showed.”

Realtor, business owner, and lifelong Forest City resident Mary Farus said that she attended the town hall because she has followed some of Sand’s work in regard to the misuse of COVID funds.

“I saw the notice posted that he would be here, so I thought I’d come to see what he had to say,” Farus said.

Claudia and Joe Tillman of rural Forest City said they were also interested in hearing what Sand had to say. Joe is planning to run for an Iowa House seat in the 9th District.

“I’ve just been impressed with the things he’s done,” Claudia Tillman said. “He keeps a close eye on things.”

Sand said the nation’s testing infrastructure was not prepared for the COVID pandemic. He cited backups for test results that lasted weeks or months due to a lack of resources and coordination. Citizens asked Sand about the report alleging rules violations and improper spending related to COVID-19 by the Administration of Gov. Kim Reynolds.

“I’m doing my job,” Sand said. “Aggressiveness is important and assertiveness. It’s important to call people out. There are rules.”

Sand noted that his office issued three audits on the state’s Medicaid system, saying Iowa is the only state that privatized everything all at once. He said providers were asked about quality of care and access to care before and after the change.

“The majority of medical professionals said it had actually gotten worse, which is interesting because the claim is that giving it to private companies is going to make it better,” Sand said.

Sand cited findings of an 891% increase in appeals of people who claim they did not receive adequate care following the transition from a state-run to private-run program. He said a follow-up evaluation showed a 500% increase in illegal denial of care.

“It tend to be law and order oriented,” Sand said. “If you want to change it, change it, but let’s respect the people who put that law in place.”

Sand also touted benefits of his Public Innovations and Efficiencies (PIE) program that is in its second year. He created the PIE program in 2019 to spark innovative ideas to cut waste and save tax dollars. The PIE program also provides local leaders with tools to collaborate and share their cost-cutting concepts, known as PIE recipes. The submissions range from installing solar panels to shutting down computers when not in use.

Sand recognizes and celebrates money-saving achievements that result in local PIE winners by hand delivering an actual pie to share with their community leaders.

“It’s a tool for local governments to do more for less,” said Sand, noting that the program was replicated by the Republican Mississippi State Auditor. “It has be really good to cross the aisle like that. It helps to save money.”

Another change that Sand noted is the addition of law enforcement professionals to his office. He said these people offer valuable perspective on how various items may be viewed in legal settings. He called a former State Trooper and former federal agent that were brought on board “a benefit to our program.”

“What I see is when you started hiring the law enforcement end, we started losing the compliance end,” Forest City Administrator and Clerk Daisy Huffman said. “I feel like we’ve lost a bunch of your auditors.”

“That has zero relation to our regular audit staff,” Sand said. “We’ve had a lot of turnover. The issue with turnover is very real, but not related to that.”

Sand said that turnover seems to be, in part, a generational issue. He said fewer people are graduating with the necessary accounting degrees to fill positions. He said his office is looking at pay increases, remote work flexibility, and changes to travel schedules to hire and retain auditors in state government.

“They must do the exact same reports we do here in Forest City,” Huffman said.

Sand said training is available through the Iowa League of Cities, but acknowledged it is a serious issue.

“The Legislature keeps changing rules, making cities redo budgets,” Sand said. “We spend so much time in Des Moines screaming and yelling about stupid, partisan things. We have people who would rather let taxpayer money go to waste than make a Democrat look good. I’m talking about leadership and you can quote me on that. This is why we have senior leadership that looks at things differently. We don’t incentivize this behavior.”

State Auditor Rob Sand speaks in the gazebo on the Winnebago County Courthouse lawn during an Aug. 2 town hall meeting.

Rob Sand addressed area residents on Aug. 2 with his dog at his side.