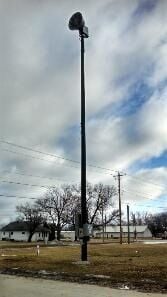 One of Britt's warning sirens is shown. This is located on the north part of the city. 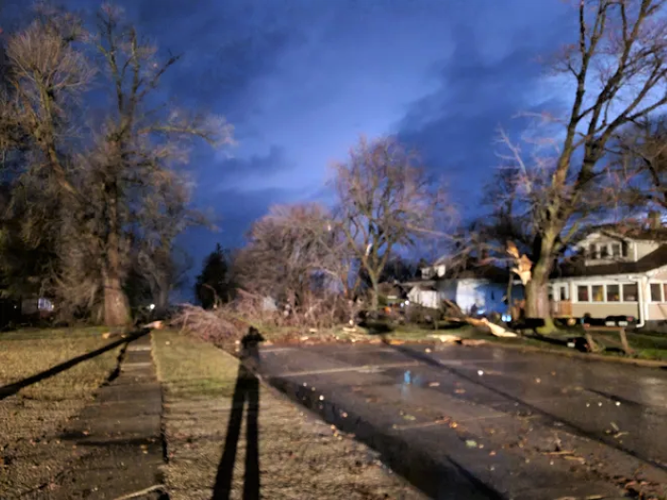 Kanawha's Main Street was littered with downed trees after heavy thunderstorms and reports of tornadoes moved through the area April 12.

A behind-the-scenes emergency was brewing along with strong storms that rolled into southern Hancock County on the night of April 12.

It necessitated manual activation of emergency sirens at the base of the siren poles in Britt, Garner, and Crystal Lake.

Three sirens in Garner, two in Britt, and one in Crystal Lake that have been on a different system than that of county Emergency Medical Service, which is tested nightly, were being transitioned to the county's two-tone system when the storms arrived.

“Usually when storms roll in, a dispatcher goes to the back of the room and pushes a button to activate those sirens and it’s no big deal,” said Buffington of the city-owned sirens. “The first Friday every month, the communications center has tested those sirens by remote access. In March, we were informed sirens didn’t activate in every community in Hancock and Winnebago Counties.”

The transition to the two-tone radio system that EMS and fire department pagers use was quickly in the works. The update will allow dispatchers to activate sirens from the radio counsel at their work station.

However, necessary electronic parts didn’t arrive before the April 12 storms.

Buffington said the hope is that it will be operable soon. County 911 surcharge funds will be used to pay for the vital communications upgrade to communities that have been on the other system.

The city of Britt installed new sirens about six years ago. Buffington said that in some instances, manual activation may have required taking a few steps up on a stool or ladder and that is not good in a severe thunderstorm or tornado warning.

Britt successfully manually activated its sirens at 7:13 p.m., but when officials tried to reactivate them at 7:35 p.m., the attempt was unsuccessful.

“I don’t know why they didn’t go the second time,” Buffington said. "It was nerve-wracking and a really good lesson for everyone.”

Buffington also urged residents use caution and not rush out their homes or safe shelters immediately after sirens cease and recommended having a secondary means of monitoring emergency situations such as emergency weather radios.

One of Britt's warning sirens is shown. This is located on the north part of the city.

Kanawha's Main Street was littered with downed trees after heavy thunderstorms and reports of tornadoes moved through the area April 12.