After a tough couple of weeks of training during winter break, the Mason City boys swim team came back with a vengeance in its first meet of the new year.

According to head coach Steve Hugo, 62 out of 79 swims were season-bests. The Mohawks took the top two places in five different events. Mason City also won eight different individual and relay races to earn crucial points in the victory.

In the meet, Lucas Benitez, Sawyer Berg, Ryan Korthals, Logan McDonough and Trevor Torkelson all hit a milestone of competing in all eight individual races this year.

The Go-Hawks boasted a 7-1 record coming into the game, while the Mohawks sat at 2-7. But Mason City was the more prepared team from the jump.

The Mohawks were strong from the start, jumping out to a 5-point lead after one quarter of play. Although it was close throughout the game, junior Corey Miner's 31 points were enough to propel the Mohawks over the Go-Hawks.

"All our guys played so hard and with great intensity tonight," Mason City head coach Nick Trask said. "Waverly is a great team and it was awesome to see our guys step up to a ranked team on every possession."

The Wolverines stormed back in the second half and outscored the Warhawks by 10 points in the fourth quarter to hand West Fork its first loss of the year.

There were no additional stats available for West Fork. The Warhawks are now 4-1 on the year.

The Huskies opened up with a 10-point lead after one quarter of play and extended it by 6 points before halftime. The Panthers couldn't climb there way out of the hole and lost by 23 points.

Sophomore Jacob Prymer led Central Springs with 14 points, while junior Angel Jose had 10 points. The Panthers are now 0-8 on the season.

West Fork struggled to keep Dike-New Hartford away from the ball, as the Wolverines racked up 19 offensive rebounds and dominated from start to finish.

There were no additional stats available for West Fork. The Warhawks dropped to 5-4 with the loss.

The Huskies held the Panthers scoreless after one quarter of play, 17-0. The Panthers fought back in the second half, but it wasn't enough. There were no additional stats available for either team. The Panthers are still searching for their first win.

The Comets could only muster up 6 points in the first half, compared to the J-Hawks 30. There were no additional stats available for either team. Charles City is now 2-7.

Central Springs had a long list of wrestlers that went 3-0 on the night. For the Vikings, Drake Tiedemann (160) and Treycen Rollene (120) were the two 3-0 wrestlers, while Newman Catholic's Holden Hensley (195) and Liam Stockberger (106) also won all of their matches. A bright spot for Rockford was Zack Pearce, who went 3-0 at 220.

The West Hancock wrestling team had a strong showing on Thursday night, beating all three teams it faced handily. The Eagles beat Garner-Hayfield-Ventura (GHV) 78-6, North Union, 70-4, and Eagle Grove, 55-17. The Eagles had 10 wrestlers win all three of their matches.

For GHV, the story was the opposite of West Hancock's. Outside of the loss to the Eagles, the Cardinals lost, 54-24 to North Union, and 54-18 to Eagle Grove. Michael Ohotto was the lone bright spot for the Cardinals, winning all three matches at 145.

The Osage wrestling team continued its dominance with three dual wins on Thursday night. The Class 2A No. 2 Green Devils beat Belmond-Klemme, 69-12, Nashua-Plainfield, 52-20, and St. Ansgar, 54-19. Osage had double-digit wrestlers win all three of their individuals matches.

St. Ansgar beat Belmond-Klemme, 51-24, and lost to Nashua-Plainfield, 58-18. In the 220-pound weight class, Sage Hulshizer was solid. The senior won all three of his matches.

In a Top of Iowa Triangular, it was Lake Mills who proved to be the best team on Thursday night. The Bulldogs won both their duals, beating West Fork, 66-14, and Forest City, 42-23.

"It was nice to get the team back on the mat after a long break," Lake Mills head coach Alex Brandenburg said. "There were some high points and low points in the meet, but it was nice to beat a rival like Forest City."

The Clear Lake Wrestling team struggled against Humboldt on Thursday night. The Lions only had one individual wrestler win in a 72-6 loss. Max Currier earned a pin at 120 for the lone win of the night. 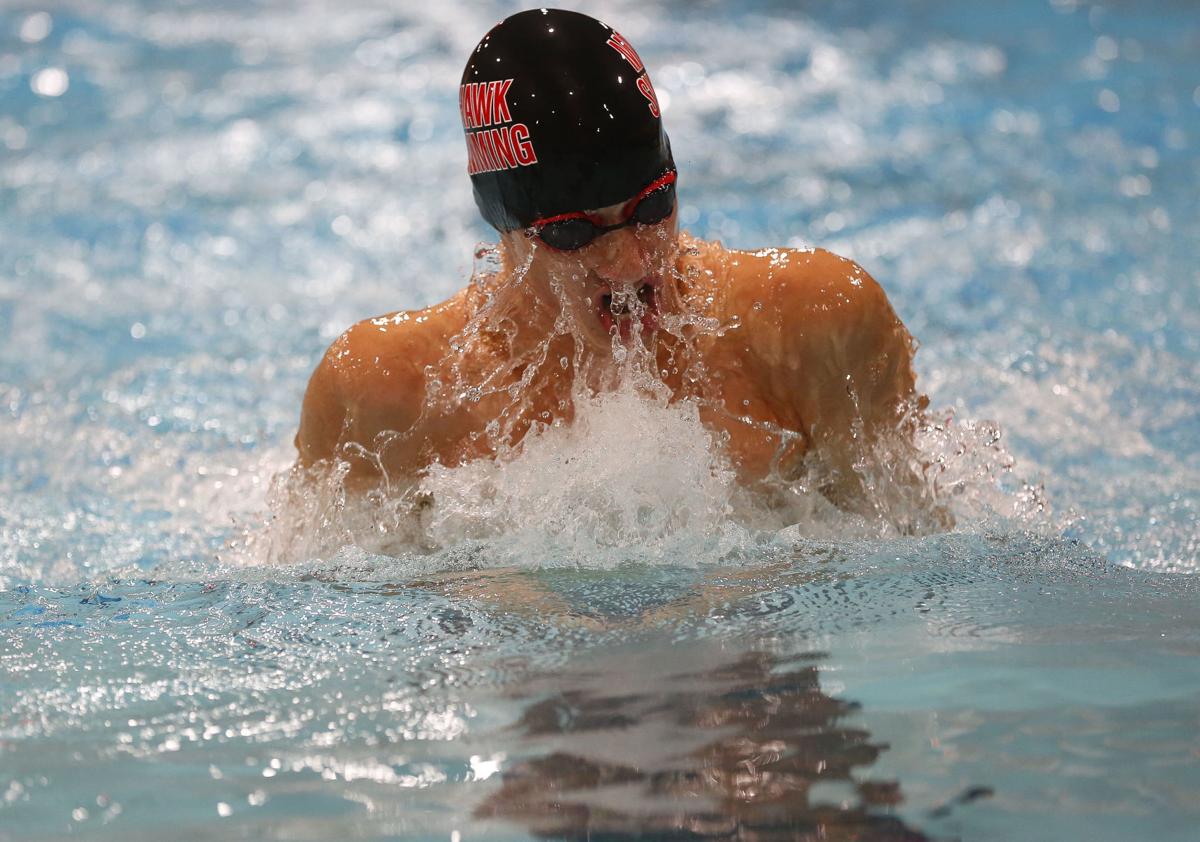 Mason City junior Ryan Korthals swims in the 200 yard relay against Dowling Catholic earlier in the season in Mason City.