The Mason City football team stormed back on Friday from a 14-point halftime deficit, as the Mohawks beat Gilbert, 16-14, on the road for the program's first postseason win since 2002.

In the third quarter, the Mohawks got on the board thanks to the first of running back Ben Amundson's two rushing touchdowns. On Mason City's second drive of the quarter, the Mohawks pulled off a fake punt that led to a 37-yard pass from Sebastian Brock to Carter Thomas. That drive later ended in a field goal, which made the score, 14-10.

"We've had that fake punt in since week one," head coach John Lee said. "It was the first time we had seen what we needed to all year long. We had our other coaches working on it, and it worked perfectly. It was truly a team effort, and I couldn't be more proud."

Amundson scored his second touchdown at the 7:28 mark of the fourth quarter, to give the Mohawks a lead they would never relinquish. After the defense recovered a Gilbert fumble with just under three minutes remaining in the game the Mohawks held on for the two-point victory.

Amundson led the way on offense for the Mohawks, rushing for 169 yards on 42 carries, with two touchdowns.

With the win, Mason City evened its record to 3-3 on the season. The Mohawks advance to the second round of the playoffs, and will play next week, at 7-0 Webster City.

"We're super proud of those kids for fighting back from 14 down and hanging in there," Lee said. "We trusted each other, and believed in each other."

Newman Catholic 49, North Butler 19: The Newman Catholic football team pulled off a 30-point victory, after battling back from a 13-point second quarter deficit. The Knights broke the game open with 35 points in the third quarter, and seven more in the fourth, to open the postseason with a decisive victory.

The Knights were down at halftime, 13-7, and opened the scoring in the second half with a 55-yard touchdown reception from Nash Holmgaard. The next score for the Knights came on a 49-yard interception return from Noah Hamilton, to put Newman up, 21-13.

Before the end of the third, Cade Schilling scored two rushing touchdowns, and Burt threw for another score. In the fourth, Holmgaard caught a 68-yard touchdown pass to put the finishing touches on the win.

Newman Catholic finished with 448 yards of total offense, as sophomore Max Burt went 15-for-25 through the air, with 312 passing yards and three touchdowns. Holmgaard finished the game with four catches for 140 yards.

The Knights have now won four of their past five games, and each of their past three wins have been by at least 18 points. They will play next week at No. 8 Wapsie Valley in the second round of the state playoffs.

North Butler ends its season with a 3-5 overall record.

At halftime, Iowa Falls-Alden led Hampton, 14-6. Midway through the fourth quarter, Bulldogs' defender Mario De La Cruz ran back a fumble for a touchdown, to pull the Bulldogs within two points. The team tried to tie the game with a two-point conversion, but failed, and the score remained, 14-12.

Two points was as close as the Bulldogs would get. Iowa Falls senior Karson Sharrar scored an 11-yard rushing touchdown with 2:41 left in the third, to put the Cadets up by 11. Iowa Falls scored another touchdown in the fourth quarter to go up 28-12.

The Bulldogs scored six more points, but couldn't complete the fourth quarter comeback. With the loss, Hampton-Dumont-CAL ended it season with a 3-5 overall record.

Iowa Falls-Alden will play Independence in the second round.

After beginning the season 2-1, the Panthers lost their final five games of the season, to finish 2-6.

South Hardin moves on to play South Hamilton in the second round.

Tripoli 60, Rockford 0: The  Rockford football team ended its season on the short end of lopsided game on Friday night, as the Warriors fell to Tripoli, 60-0.

Rockford ends its season with a 2-6 overall record, as the Warriors dropped each of their final four games.

Tripoli quarterback Connor Piehl carried the ball 11 times for 170 yards, and three touchdowns. The Panthers scored eight total touchdowns on offense, and completed two-point conversions on six of them.

No stats were available for Rockford.

Tripoli moves on to play North Iowa in the second round of the state playoffs.

The loss snapped a three-game winning streak for Northwood-Kensett, who finished the season with a 4-4 overall record. The Vikings offense scored at least 50 points in five of its eight games this season.

North Iowa moves on to play Tripoli in the second round.

West Fork 42, North Union 28: After the West Fork football team fell behind, 8-0, at the start of the first quarter, the Warhawks' offense roared back.

West Fork scored 14 points in the second, third, and fourth quarters, and the Warhawks outscored the Warriors, 42-20 over the final three frames.

With the loss, North Union ends its season with a 1-7 overall record. West Fork will travel to St. Ansgar next Friday to take on the undefeated No. 2 Saints in the second round.

Forest City needed only 132 total yards on offense to snag the win, led by Moore, who took the ball 28 times for 94 yards. The defense finished with 41 total tackles, and two interceptions, one each from Kellen Moore and Noah Miller.

The win gave the Indians their fourth consecutive victory, and was the first postseason win for the program since 2011.

Forest City will play next Friday, at No. 5 Waukon.

Lake Mills 63, Bishop Garrigan 34: Lake Mills bounced back from a tough loss last week to St. Ansgar in the district title game with a dominant win over Bishop Garrigan in the first round of the state playoffs.

The Bulldogs downed the Golden Bears, 63-34, as Bishop Garrigan ended it season with a 2-6 overall record.

Lake Mills got its offense from all over the field. Quarterback Bennett Berger went 4-for-4 passing, for 180 yards. All four of those passes went for touchdowns, two each to junior Kadin Abele and sophomore Brady Hanson.

On the ground, senior Casey Hanson scored two touchdowns, with 154 total yards on six carries. Brady Hanson Jack Ramaker rushed for 81 and 86 yards, respectively, with each contributing one rushing touchdown.

The Bulldogs' offense compiled 579 total yards on the night, including 399 yards rushing.

"We came out of the gate on fire offensively," head coach Bill Byrnes said. "Our execution was outstanding."

On defense, senior Caleb Bacon finished with a team high 9.5 tackles, with one fumble recovery, while junior Seth Hermanson and senior Casey Hanson led the way with two sacks apiece.

The Bulldogs, with 17 seniors on the roster, kept their season alive for at least one more week. Lake Mills will travel to South Winneshiek next Friday to take on the No. 9 Warriors.

"Great win for the program, and Lake Mills," Byrnes said. 'This senior group has done a great job with their leadership."

Before seven minutes had gone by in the first quarter, senior running back Cole Kelly had already scored four touchdowns. Kelly finished his day with eight carries, for 195 yards and four scores.

Eight different players got at least one carry for the Eagles, as the team finished with 420 yards on the ground. Senior Ben Martinez got one carry, which he ran 72 yards for a touchdown.

Junior Kane Zuehl scored one touchdown, and ran the ball five times for 25 yards. Junior Braden Walk scored two touchdowns for West Hancock, one on a 40-yard touchdown pass from Cayson Barnes, and the other on an 84-yard kick return.

The Eagles' defense finished with seven tackles for loss, one interception, and two fumble recoveries.

With the win, the No. 5 Eagles improved to 7-1 on the year. West Hancock will host 3-3 Madrid next Friday in the second round.

The Comets finished the season without a victory for the first time since 2012, as the team went 0-6 on the year.

Wahlert Catholic moves on to play Decorah in the second round.

Janesville 76, Riceville 12: The Riceville football team ended the 2020 season in tough fashion, as 46 first quarter points from Janesville built an advantage too big for the Wildcats to overcome.

Janesville scored eight rushing touchdowns in their 76-12 win, led by senior Carson Pariseau, who rushed for five scores on nine carries and 113 yards.

No stats were available for Riceville, which finished its season with a 2-6 overall record.

Janesville will host Kee next Friday in the second round of the state playoffs. 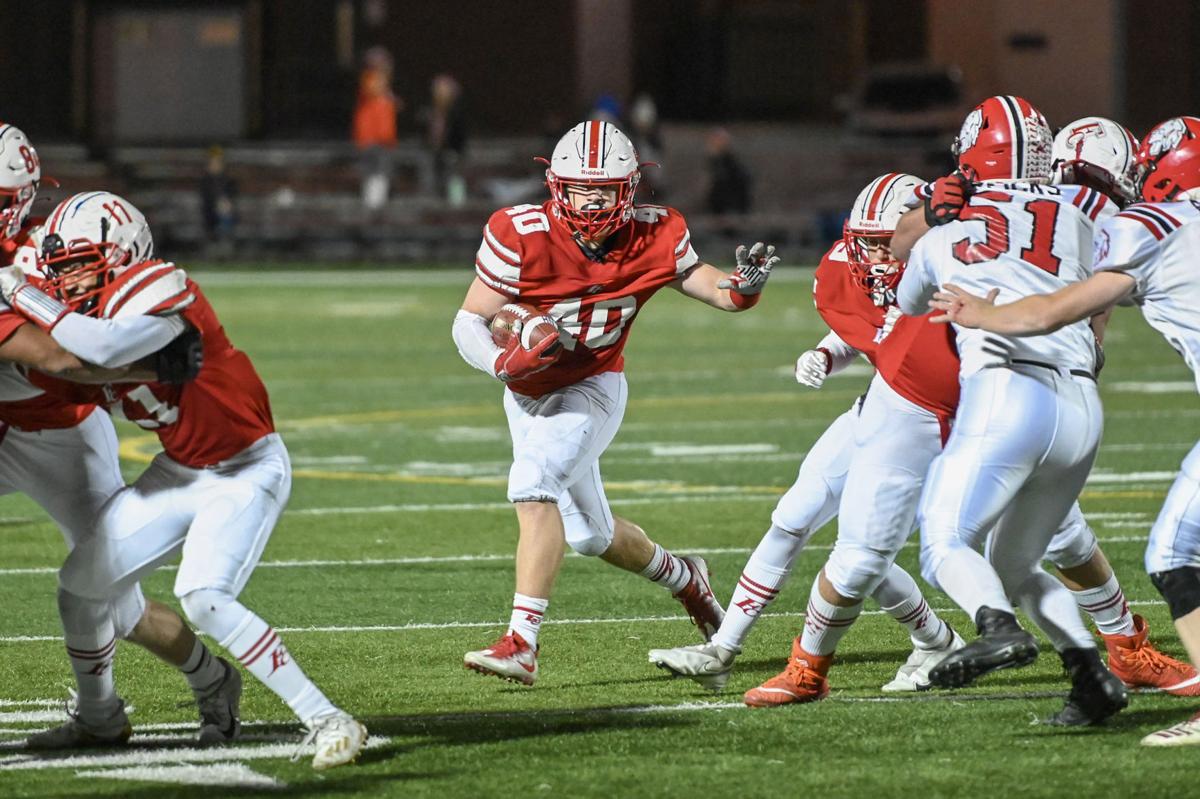 Forest City junior running back Reese Moore looks for running room in the Indians' 7-0 win over Hampton earlier in the season in a Class 2A playoff game in Forest City. Moore rushed for 94 yards and scored the game's only touchdown.