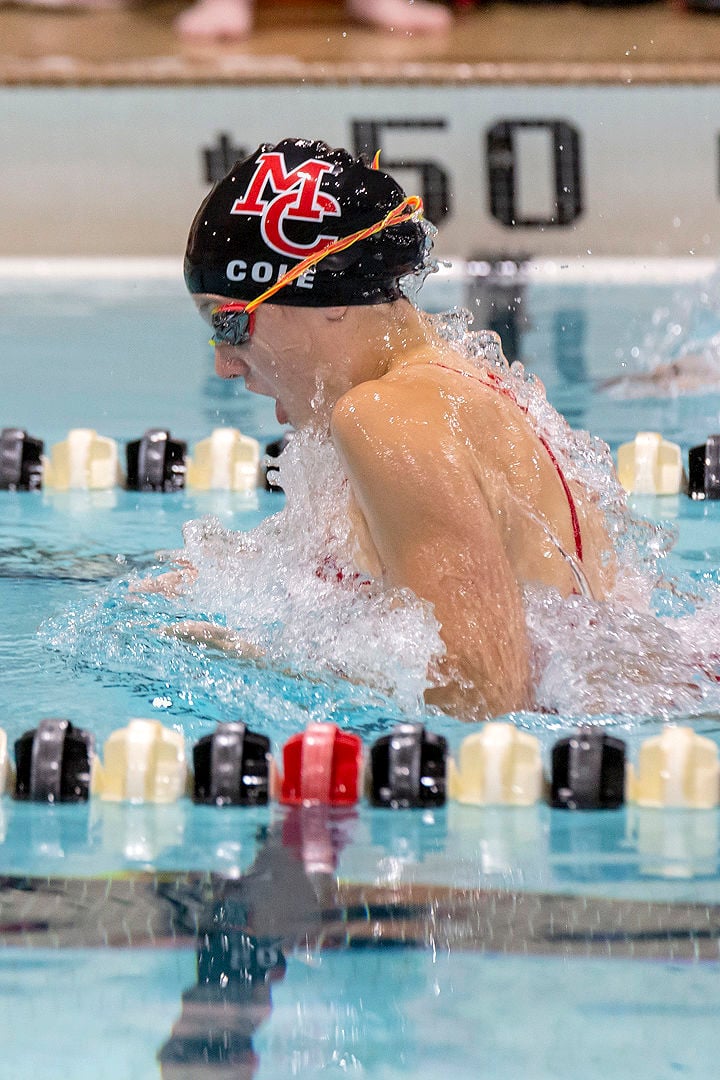 Mason City swimmer Aspen Cole competes at a home meet earlier in the season. Cole finished 16th in the consolation finals on the 200-meter individual medley on Saturday at the state meet in Marshalltown. 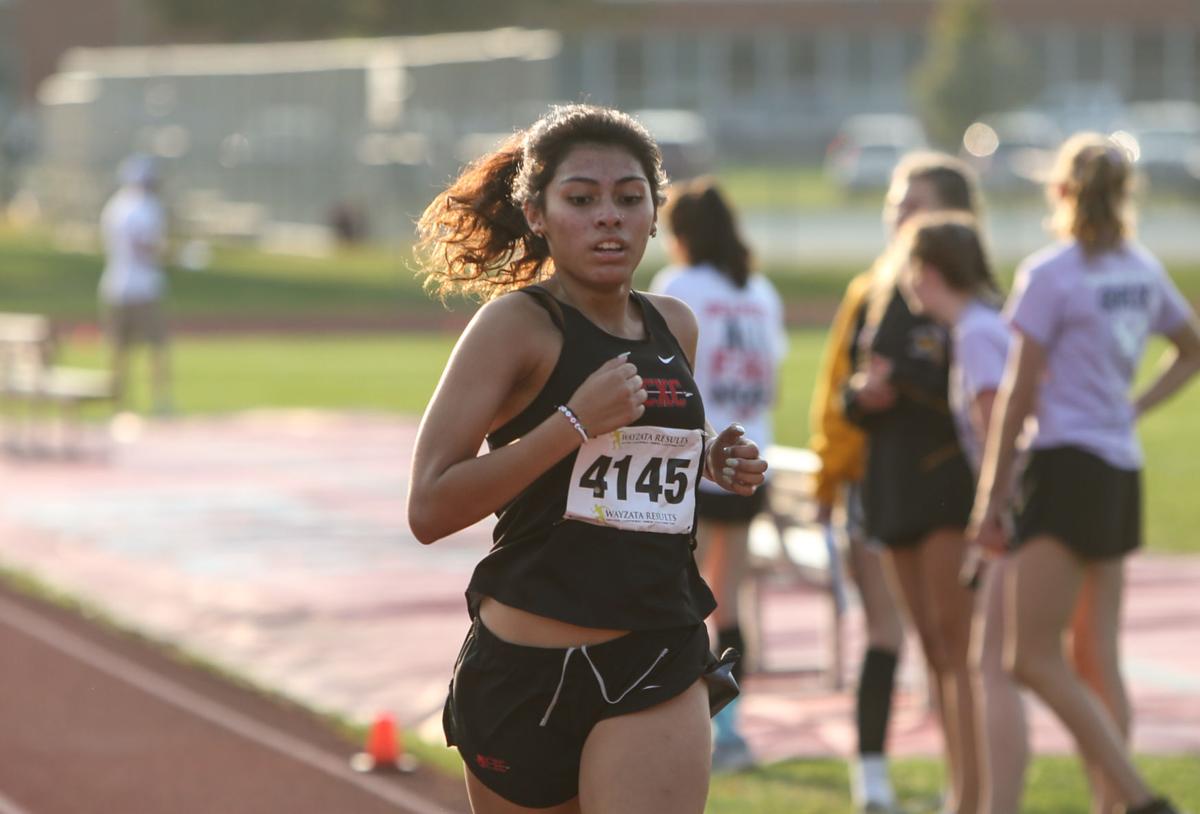 Mason City's Marcella Sierra reaches the finish line at a cross country meet at Mohawk Field earlier in the year. Sierra was the Mohawks' top finisher in a meet at Wartburg College on Saturday, finishing in eighth place.

The Mason City girls' swim team had a strong showing at Cedar Falls on Saturday. The Mohawks finished second out of five teams with 411 points. The only team that finished ahead of them was Cedar Falls.

Taylor Halverson placed second in the 100-yard breaststroke with a time of 1:12.43. The Mohawks relay teams also finished second in both the 200-yard medley and the 400-yard free relays.

The team travels to Fort Dodge on Tuesday night.

The Mohawks finished fourth with 87 points on the girls side. Osage finished eighth with 223 points and Clear Lake finished 12th with 320 points.

The Charles City volleyball team hosted a home tournament and won all three of its matches on Wednesday. An area team that traveled to compete in the Charles City tournament was Central Springs, who finished at 1-2 on the day.

Osage and Lake Mills also competed on Saturday. The Green Devils traveled to Waverly-Shell Rock and ended up losing only their second match of the season. Osage went 4-1 at the tournament. Lake Mills traveled to Columbus Catholic and finished with a 2-2 record.

The first set was close, but the Comets took the win, 25-22. Charles City took the next set easily with a 25-14 win. Junior Kaylee Anderson had six kills and junior Ashlyn Hoeft had 11 assists for the Comets. The Panthers were led by senior Abigayle Angell, who had five kills. Senior Kylie Hanft and Senior Paige McEachran each had seven assists.

Charles City 2, Tripoli 0: The Comets earned another win in the second match of the day against Tripoli. The scores of the two sets were 25-20 and 25-21, respectively.

Senior Danielle Stock had nine kills and Anderson had eight in the win for the Comets. Senior Toni Maloy had 17 digs and two aces as well.

Charles City 2, Turkey Valley 0: Charles City rounded out its stellar day with a win in two sets over Turkey Valley. Both set scores were 25-15. Stock and freshman Claire Girkin had four kills in the win. Hoeft had six assists as well.

Turkey Valley 2, Central Springs 0: The Panthers battled against Turkey Valley, but couldn't come away with a victory. The Trojans won, 25-20, and 25-13, respectively.

McEachran led the Panthers with six kills, 13 assists and two aces. Coleman had seven kills and two aces as well.

Osage 2, Grundy Center 0: The Osage volleyball team started out its day with a two-set victory over Grundy Center. The scores of the sets were 21-18 and 21-12, respectively. There were no additional player stats available for the tournament.

Osage 2, Union 0: Osage came out in its fourth match of the day and had no trouble beating Union in two sets. The scores of those two sets were 21-14 and 21-16, respectively.

Waverly-Shell Rock 2, Osage 0: The Green Devils gave Class 4A, No. 6 Waverly-Shell Rock a good test, but couldn't come away with a victory. Both sets were close, but Osage lost 25-23 in the first set and 25-20 in the second.

Lake Mills 2, Don Bosco 1: Lake Mills and Don Bosco engaged in a close match to start the day at Columbus Catholic on Saturday. In the end, the Bulldogs prevailed with a 2-1 match win.

Don Bosco came out and rocked Lake Mills, 21-17, in the first set. The Bulldogs responded with two straight set wins to win the match, 21-13 and 16-14. Senior Kylie Greenfield had 10 kills in the win. Junior Leah Moen had 19 assists and an ace as well.

Independence 2, Lake Mills 0: Lake Mills struggled to get much going and lost against the ninth-ranked Independence Mustangs. The scores of the two sets were 21-14 and 21-13, respectively.

Lake Mills 2, Waterloo East 0: The Bulldogs got back in the win column with a 2-0 victory over Waterloo East. The scores of both sets were 21-16. Greenfield had 10 kills and Moen had 17 assists in the win.

The Clear Lake football team fell to West Marshall on Friday night, as a 13-point rally in the fourth quarter was not enough to propel the Lio…

It was a bittersweet night on Friday at Mohawk Stadium.

Mason City swimmer Aspen Cole competes at a home meet earlier in the season. Cole finished 16th in the consolation finals on the 200-meter individual medley on Saturday at the state meet in Marshalltown.

Mason City's Marcella Sierra reaches the finish line at a cross country meet at Mohawk Field earlier in the year. Sierra was the Mohawks' top finisher in a meet at Wartburg College on Saturday, finishing in eighth place.