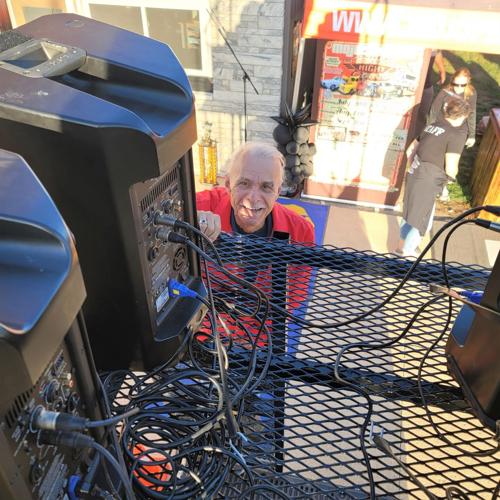 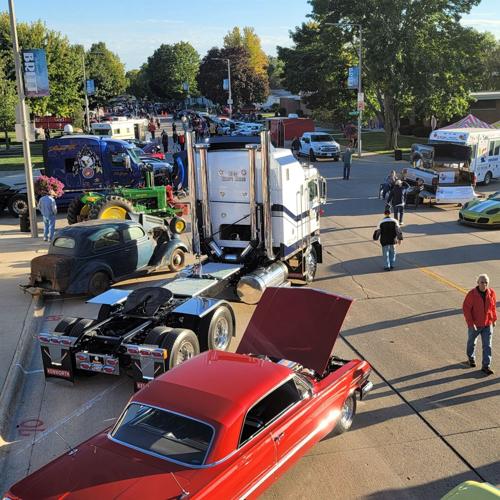 Trucks were among the hundreds of vehicles shown in Britt on Sept. 21. 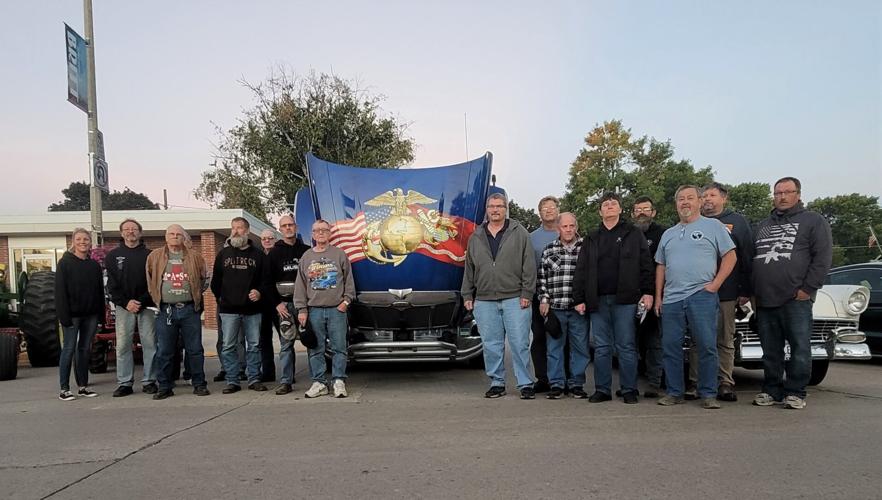 Veterans gathered around a semi-tractor truck cab saluting their their cause and were recognized for their service at the Sept. 21 cruise in Britt. 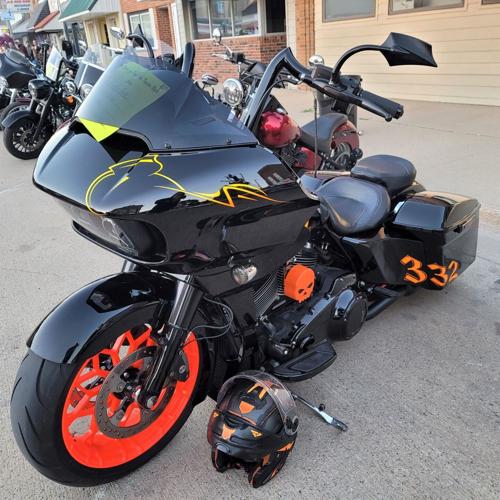 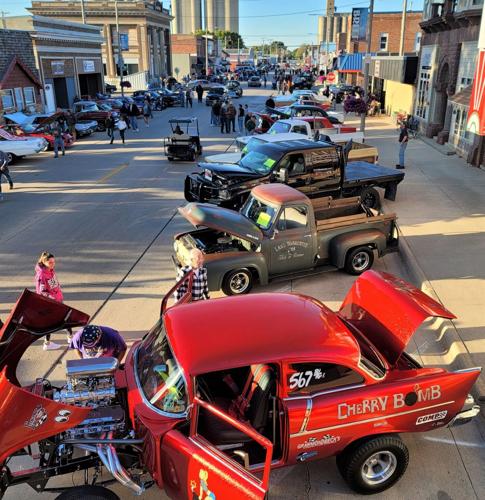 Britt's Main Street was packed with nearly every kind of vehicle imaginable on Sept. 21. 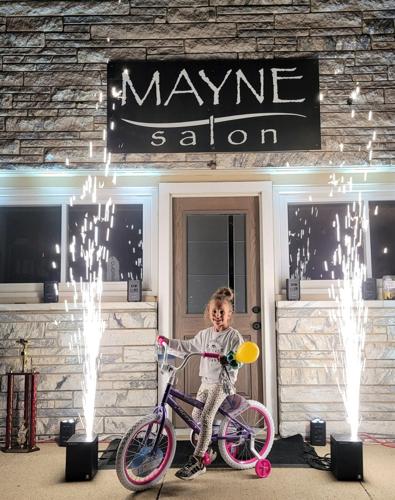 Children's' faces weren't the only thing that was lit up when they claimed awards for their bikes at the Sept. 21 cruise. 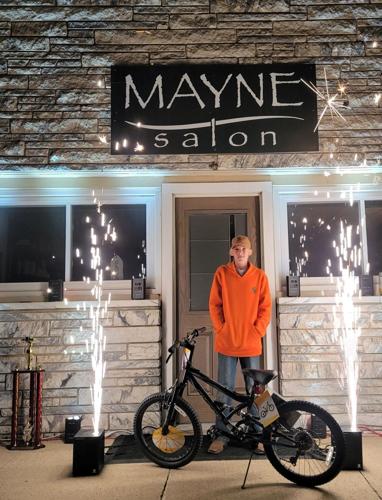 A bike winner was greeted with a light show by Mojo Productions in Britt on Sept. 21.

There's more to the final Britt Car, Truck, Bike and Tractor Cruise of the year than putting on a good show for everyone. This year’s Sept. 21 finale was again a big draw for local businesses, according to a Britt Chamber of Commerce official.

Event organizer Jared Wingert is known as a showman from his work as a disc jockey at Mojo Productions in Britt. With the annual cruise events, he and other volunteers are also helping build connections to a larger community that now regularly gathers to spend time and money in the town every summer, according to Britt Chamber of Commerce President Amy Madson.

“Jared goes around to all the shows in the area and they’re all basically piggybacked off his shows,” said Madson, citing a net result of more people coming to the Britt shows. “It’s bringing in people from all over and I know some people travel for more than an hour to get here. He doesn’t do any show small. He definitely knows what he’s doing with the car shows. It has been well-received by the businesses.”

Thousands of participants and spectators continue to gather in downtown Britt three times annually for the shows that will return for a sixth year in 2023. This year’s season finale was no exception. Wingert estimated more than 400 vehicles and 3,000 people were in attendance.

“We were very lucky with the weather in the last five years,” Wingert said. “We’ve done 15 cruises and 14 of them were not rescheduled. Wednesday night, once the cars started coming in the skies cleared off again. Then, it was like a blur because everything happened so fast.”

In the midst of the fast-paced mob scene, a few things stood out to Wingert about the most recent show, including seeing Britt native John Francis climb up the side of and onto a platform that held speakers and sound equipment while wearing a big smile and offering a warm greeting.

“He’s an original guy in town and he’s a very, very nice guy,” Wingert said. “He’s a local DJ and a veteran as well. He came uptown just to see everything and to visit with everyone. He’s a 100% original Britt guy. It kind of completes the circle.”

He was one of a number of military veterans that gathered for photos, conversations, and fun in a veterans’ recognition that was included in the show. As part of the tribute to them, standing in front of an elaborately painted Marine tribute semi-tractor cab, Lee Greenwood's “God Bless the USA” was played.

As for Mojo Productions’ $1,000 presentation pick, which was personally selected by Wingert, he said it went to a Clear Lake man who brought his unique, eye-catching motorcycle to the show.

“I hand-picked a motorcycle, because I liked the color scheme of his motorcycle,” Wingert said. “I’d never seen a motorcycle done that way. It was very original looking. It stood out from the crowd. When you see something like that, you just know it’s the one.”

Chamber President Madson said eating establishments probably got the biggest boost in business from the event, noting that some storefront businesses stay open late or do something in conjunction with it while others close so everyone can partake in the fun.

“Many of his (Mojo Productions) wedding people come to the shows,” Madson said. “He just good at getting turnout. It’s a family-friendly event too. He opens it up for everyone to make sure everyone is having a good time.”

Anyone looking for more information about these annual Britt shows may visit the Britt Car, Truck, Bike and Tractor Cruise Facebook Page, @BrittCTBTcruise.

I think you have all heard about the pending change of ownership of Waldorf University. To be more specific, the Waldorf Lutheran College Foun…

Loren Stene is an artist. It just took him awhile to realize it.

Many of the mostly state and local candidates gathered outside the Winnebago County Courthouse on Sept. 24 emphasized growing nationwide crise…

The Forest City council on Oct. 3 discussed a number of citizen reports of flags containing profanity flying recently in the community, as wel…

The list of Iowa counties objecting to proposed carbon capture pipelines is growing.

The West Hancock Ambulance Service in Britt recently accepted a $1,000 contribution from the NEW Cooperative Foundation. The funds will be use…

Trucks were among the hundreds of vehicles shown in Britt on Sept. 21.

Veterans gathered around a semi-tractor truck cab saluting their their cause and were recognized for their service at the Sept. 21 cruise in Britt.

Britt's Main Street was packed with nearly every kind of vehicle imaginable on Sept. 21.

Children's' faces weren't the only thing that was lit up when they claimed awards for their bikes at the Sept. 21 cruise.

A bike winner was greeted with a light show by Mojo Productions in Britt on Sept. 21.