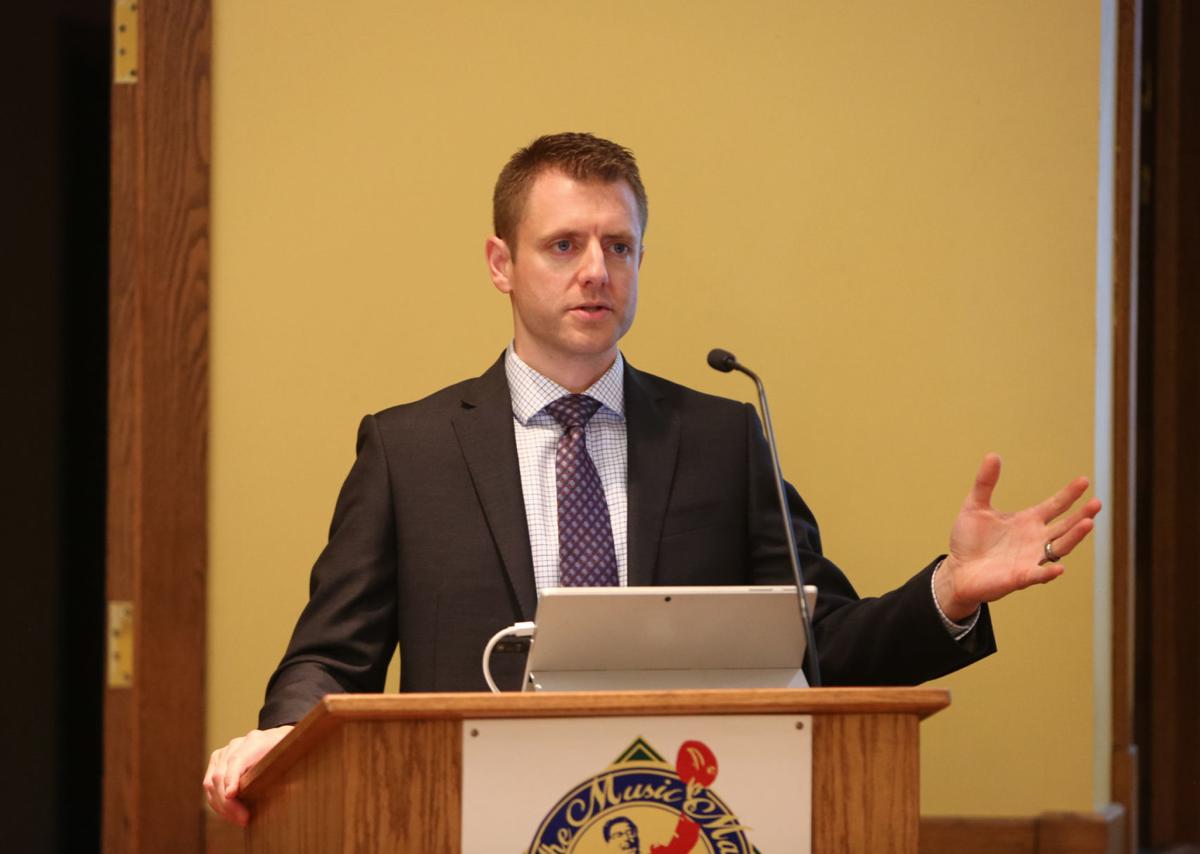 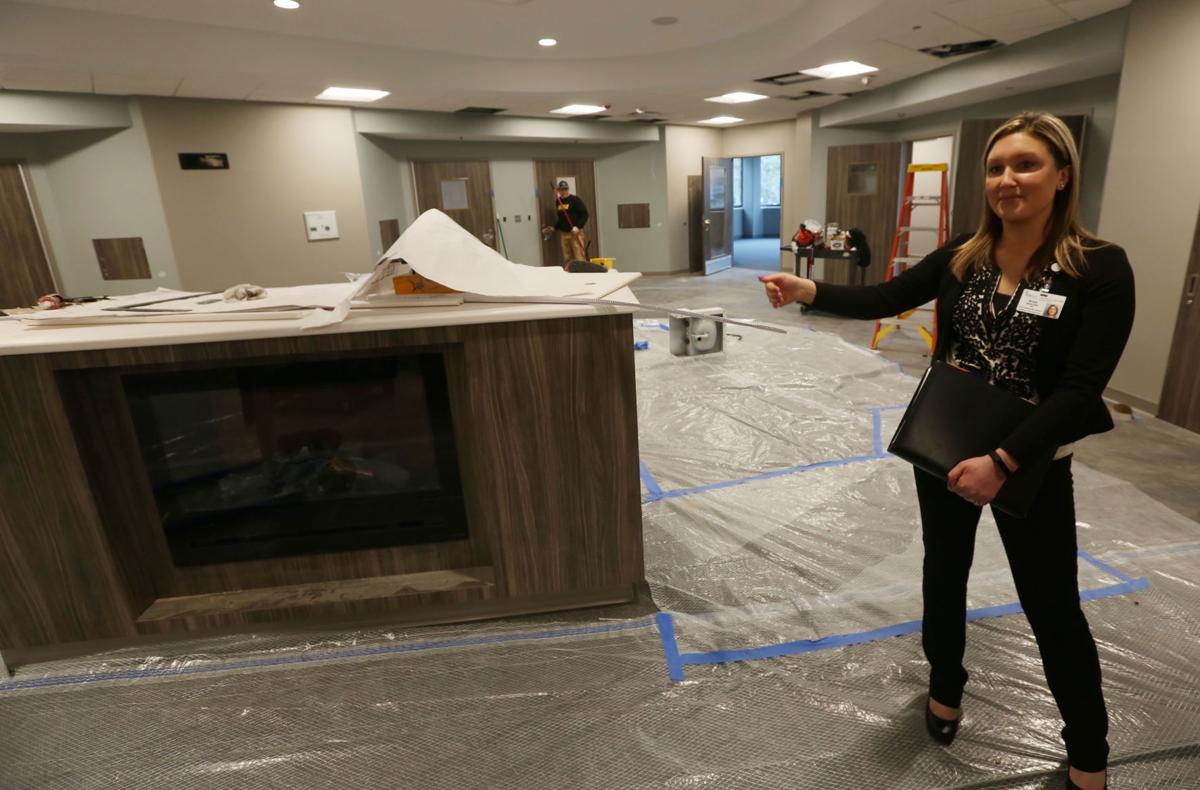 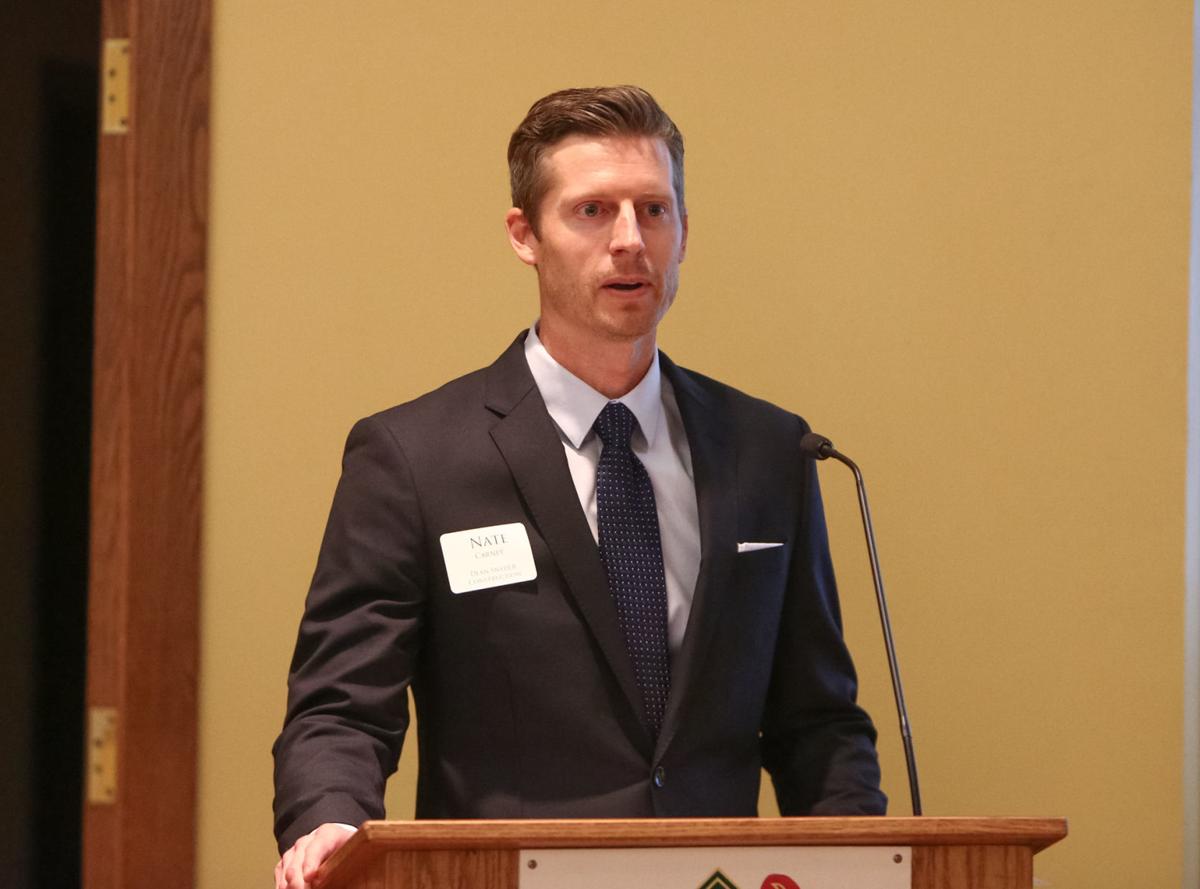 Incoming Chairman of the Board, Nate Carney speaks at the 2019 North Iowa Corridor annual meeting. 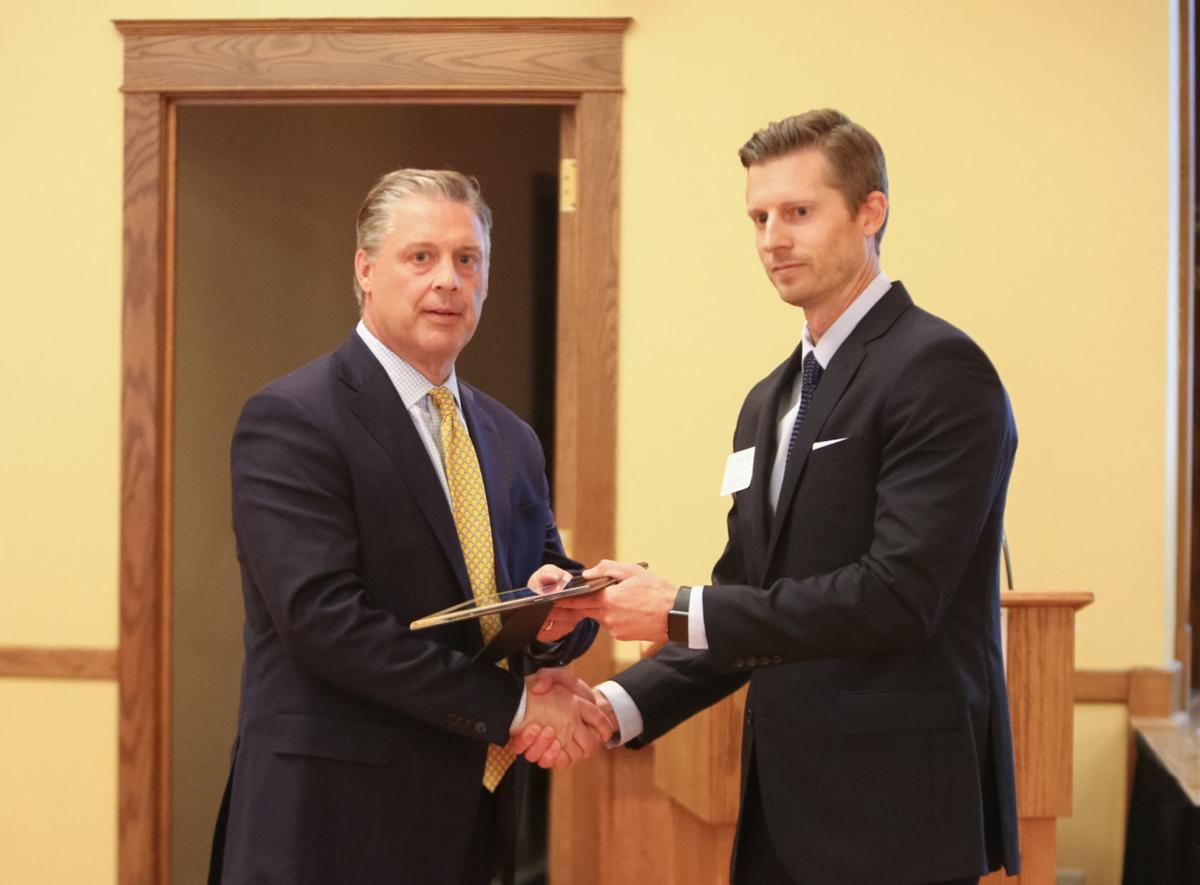 Nate Carney, right, presents a plaque of recognition to his predecessor, former Chairman of the Board, Pat Stevenson at the 2019 North Iowa Corridor annual meeting.

Over the course of the 1 1/2-hour meeting at The Music Man Square, the group presented to local business leaders and politicians alike about where the North Iowa area had been in the past year and where it was heading.

What it had done or helped to do: The $10.6 million behavioral health center addition at MercyOne, the 133-unit apartment deal with Talon Development, Lake Time Brewery's gradual expansion throughout the state.

What it was still working on: A $30 million expansion with Golden Grain (through a grant) that would add about 10 jobs, tomato grower Bushel Boy setting up shop in Mason City at a $35 million facility in the city's industrial park which would require about 50 jobs and the $63 million dollar project with Kraft-Heinz for 40 more jobs.

Outgoing board chairman Paul Stevenson attributed the myriad projects in the North Iowa Corridor's current portfolio to the fact that members were constantly searching.

"A lot of us have been out there prospecting for new businesses," Stevenson said.

Which North Iowa Corridor president Chad Schreck acknowledged in his remarks while also emphasizing the importance of retaining businesses and workers.

In fact, Schreck said that the North Iowa Corridor had ramped up its retention and expansion over the past year, the Talon deal (which is slated to break ground in July) being one possibility to keep people in the area.

All that as unemployment levels slowly track downward and focus on career exposure to students increases. Schreck mentioned the idea of getting such programs into the school system.

"We believe we're primed for success and some amazing things in the year ahead," Schreck said.

And if Ben Winchester, the group's guest speaker, didn't explicitly spell out the benefits of such projects to the area he did challenge the idea that rural communities are just circling the economic drain.

Winchester, a rural sociologist from the University of Minnesota, said that the narrative being used to describe small towns is "wrong."

He said that this idea of such areas experiencing a "brain drain" – seeing talented members of the community set sail for better options elsewhere – was akin to the sleepy town myth or the notion of "everybody knowing each other." As he saw it, such understandings aren't new.

"Rural is changing," Winchester acknowledged. "(But) it's not dying."

To bolster this claim, Winchester pointed to the fact that rural population has increased by about 11 percent in recent decades, though urban growth has outpaced it at 48 percent, and housing changes are up throughout the North Iowa area.

Between 2000 and 2010, according to census data cited by Winchester: Cerro Gordo, Floyd, Franklin, Hancock, Mitchell and Winnebago all experienced positive housing changes of 3 percent or more. While population numbers for those areas had in fact gone down, housing numbers went in the opposite direction.

And, even with the shifts, Winchester argued that people still wanted to move to small towns and that that has been a trend since the 1970s. In particular, Winchester pointed to the 30 to 49 year-old age demographic, which he said was more interested in the rural idea.

Winchester went further to say that not only are such people coming to smaller, more rural towns but the leaders and residents in those areas should pay heed.

"Listen to the newcomers because their narrative is wholly positive," he said.

A Clear Lake couple credited for saving the Surf Ballroom & Museum 25 years ago is being remembered in a new way.

More than $62 million and more time.

On Tuesday, Principal Financial Group revealed that it and Wells Fargo had reached an agreement where Principal would acquire Wells Fargo's In…

A lack of resources forced MercyOne to turn away 3,000 behavioral health patients in 2016. They were referred to facilities in Waterloo, Des M…

This year is proving to be a momentous one for MercyOne North Iowa Medical Center in Mason City.

A southern Minnesota producer of hydroponic – water grown – tomatoes is looking to expand into Iowa, according to Mason City's mayor.

Pitas are back in town.

The whole is greater than the sum of its parts.

Mason City has new confirmation from the Iowa state officials: It's a "Great Place."

The start of construction on a $16 million, 133-unit apartment complex in downtown Mason City has been set.

CLARIFICATION: The headline on this story has been changed to reflect that it is MercyOne's parent company that is cutting the billing jobs. T…

As the River City Renaissance Project has steadily unfolded over the course of 2019, there have been multiple addenda, changes and tweaks to t…

Kraft Heinz can move forward on a development agreement that will bring more than $62 million in improvements to its Mason City plant, after t…

Incoming Chairman of the Board, Nate Carney speaks at the 2019 North Iowa Corridor annual meeting.

Nate Carney, right, presents a plaque of recognition to his predecessor, former Chairman of the Board, Pat Stevenson at the 2019 North Iowa Corridor annual meeting.