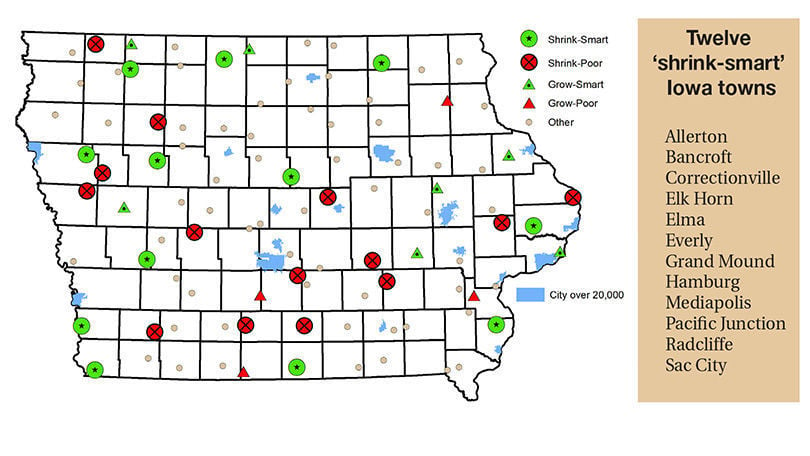 12 Iowa towns, marked by stars inside green circles, determined to be “shrink-smart.” 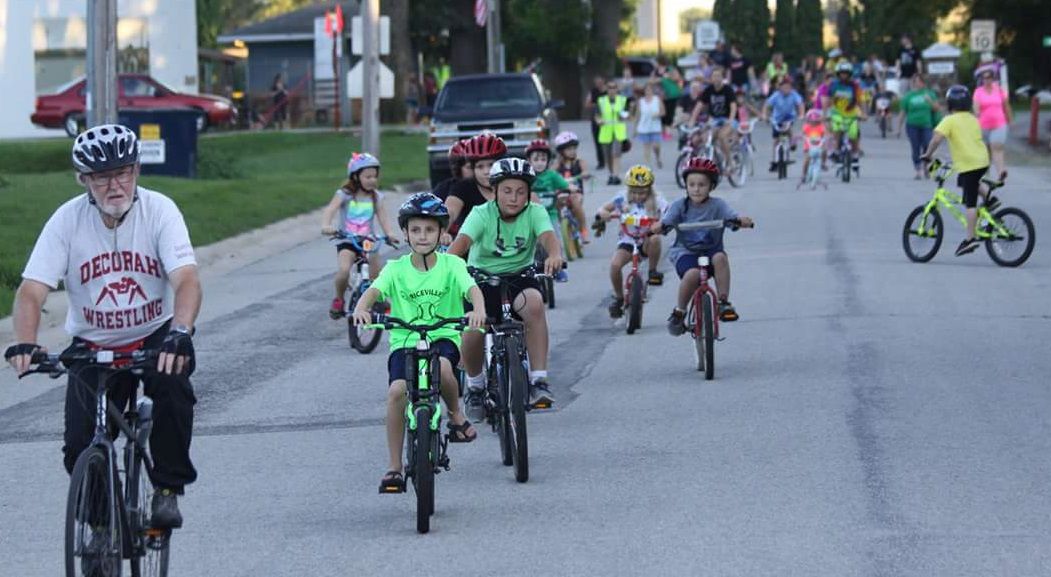 The Elma Bike Rodeo in August 2016. The Howard County town was identified as one of 12 'shrink-smart' communities in Iowa, according to a report by an Iowa State sociologist.

You can still live large in a small town.

A new report from an Iowa State University sociologist identifies a dozen Iowa towns where residents believe quality of life in their community is improving at the same time the population is shrinking.

David Peters, an associate professor of sociology and author of the report, said these towns, described in the report as “shrink-smart” communities, show that a smaller population doesn’t necessarily denote a withering community, according to an Extension news release.

“People tend to think of rural America as declining. They equate decreases in population with overall decline in quality of life,” Peters said. “We wanted to ask if that’s really true, and we found that it doesn’t have to be.”

The survey data showed 12 Iowa towns fitting those parameters where citizens reported improved quality of life at the same time the populations decreased.

What did those 12 towns have in common?

Peters said the survey results showed a focus on social interactions within those communities. The towns labeled shrink-smart in the report demonstrate high levels of local involvement, such as volunteering in community organizations. Peters called this “bridging social capital,” a sociology term describing diverse and inclusive networks that tie residents together across demographic and economic lines.

He also noted that economic factors, such as income and poverty rates, were not significantly different from the 12 shrink-smart towns and towns that showed declining quality of life and shrinking populations, a result that surprised Peters.

He said the results in the report may empower rural communities across the state because the data show that social interactions playing a major role in attitudes regarding quality of life can be improved quickly and cheaply.

Peters said some communities view population declines as a major problem that can be solved only through major investments in infrastructure or by attracting new employers.

His report suggests encouraging a more open and welcoming atmosphere in a community may go a long way toward boosting quality of life, regardless of potentially expensive new investments.

Jobs that fit the market

The data also show shrink-smart towns tended to demonstrate growth in “goods-producing” jobs such as construction and manufacturing. These jobs provide good wages and benefits while also requiring some training or education beyond high school but not a college degree, a fit for the labor markets of rural Iowa communities, Peters said.

Peters said he intends to work with officials in the 12 shrink-smart towns identified in his report to determine what strategies the communities implemented regarding community involvement and quality of life. From there, he hopes to formulate best practices that can be transferred to other rural towns across the state.

Peters’ research is part of a National Science Foundation project on shrink-smart towns led by the ISU College of Design.

“We found that you can live in a thriving community even with a population in decline,” Peters said. “Towns can control their own quality of life without requiring a lot of money or time, and we think that’s a very empowering message for Iowa’s rural residents.”

After two successful tea events at the Larch Pine Inn last month in Clear Lake, the owners of the historic bed-and-breakfast have decided to host more in their off-season.

Wayne’s Ski and Cycle has returned to downtown Mason City.

As early as January 9, customers will be able to test their meddle at Country Axe.

12 Iowa towns, marked by stars inside green circles, determined to be “shrink-smart.”

The Elma Bike Rodeo in August 2016. The Howard County town was identified as one of 12 'shrink-smart' communities in Iowa, according to a report by an Iowa State sociologist.